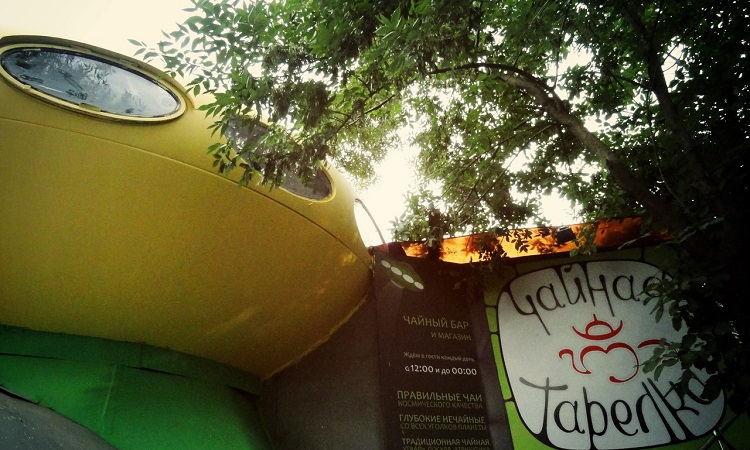 @prostye_krd recently posted several photos of this Futuro (which we believe were taken quite some time ago based on the dates of other photos of this unit on this page) to Instagram and, along with the photos, noted that it no longer operates as a tea room (or anything else for that matter) though there are businesses operating around the base of the unit; a cafe serving kebabs and beer on one side and a stand selling vegetables on the other (seen in the photo below).

The original photos and comments can be found on Instagram here. 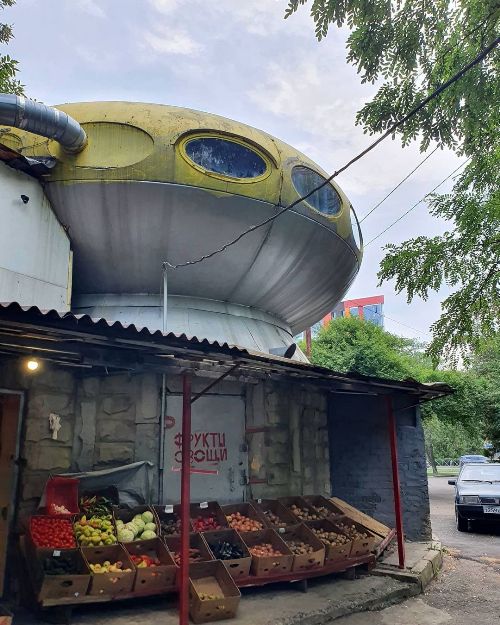 Coincidentally just today we came across an article titled (according to Google Translate) "Where in Russia can you eat or spend the night in a flying saucer?" on the website Russia Beyond which also mentioned the current status of the unit. That article also included this rather cool photo (original credit Petšakovski/Sputnik) of the unit from back in its Sputnik days when it operated as a "children's cafe". 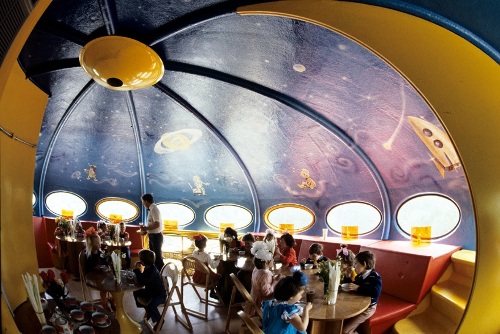 In a recent email Konstantin sent us a link to a 2018 blog post by haydamak; thanks Konstantin. The blog post is about this Futuro. It does not contain any new information but it was accompanied by the two photos seen below.

The photos themselves are by Butenko Alexander and were taken 022618; the originals can be found on Flickr here and here. The photos show us that as of that date the yellow finish applied to the unit during its renovation several years ago had completely degraded. For the record this tells us that the photos added to this page 051119 and thought to be from approximately that date must actually have been from much earlier since they show the yellow finish still partially visible. 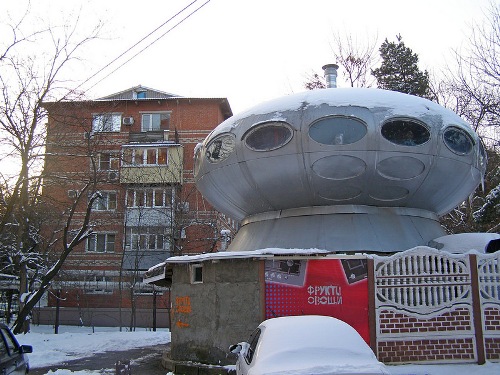 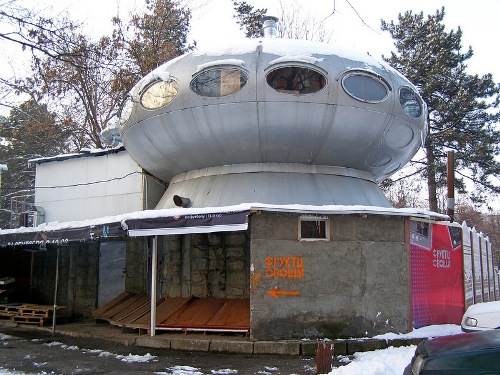 These two photos, posted to Instagram 042119 by stadter provide us with a nice up to date view of this Futuro and its current condition. 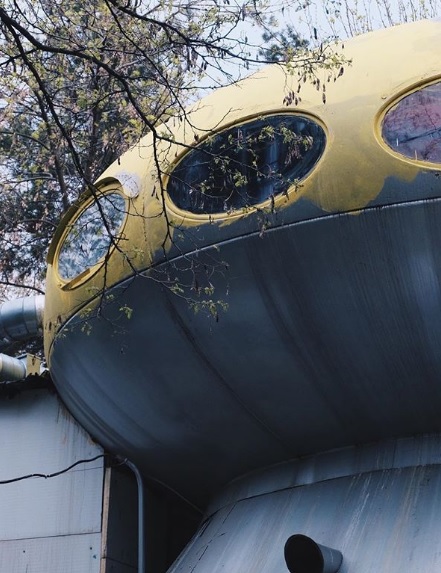 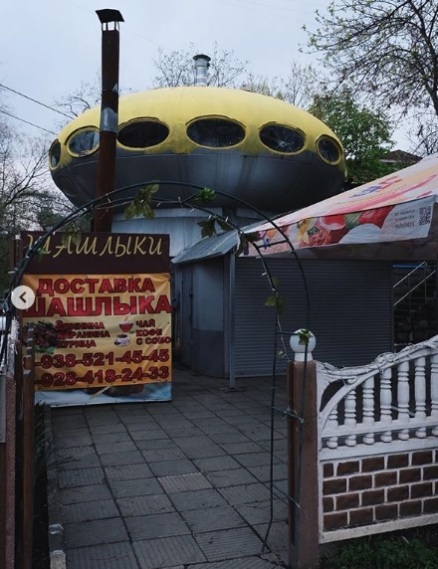 This photo was posted to Instagram by nadya_yarysh on 062816. In the previous update (021916) we added a photo that showed this Futuro in a rather deteriorated condition. We were not sure if the photo was an old one reflecting condition prior to the 2012/2013 renovation or a recent one.

That said the most prevalent use of Instagram is to take a photo and post it "there and then" and so, with there now being two photos showing this unit in a deteriorated condition, we tend to be of the opinion that despite the relatively recent renovation the Futuro has subsequently (and quickly) been allowed to start to deteriorate or at the very least it needs a really good wash and perhaps a "paint job". 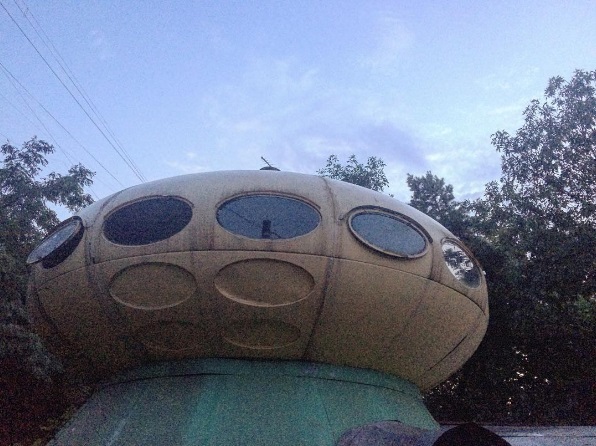 The photo below was posted to Instagram on 021516 by Dimitry Oskes. Though it is not always apparent when Instagram photos were actually taken the photo was posted with the annotation "February, 2016".

We however find ourselves wondering if this is a photograph taken sometime prior to the 2012/2013 renovation of this Futuro. If it is from February 2016 then, based on how the unit looks in this photo (at least to us), it appears the Futuro's condition has started to decline drastically and rapidly. 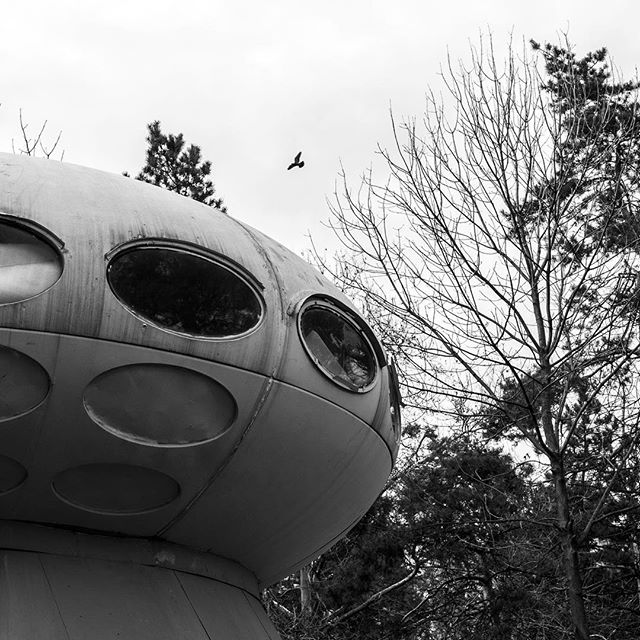 Yves Buysse has made many contributions to these pages and this week he sent us several links and photos related to this Futuro. This first photo shows the Futuro as it was in 1986. The photo is by V. Kadorkina and is courtesy of the website Myekaterinodar.com. This photo along with the others that Yves sent provide a little interesting pictorial history of this Futuro.

In this first photo other than the fact that it is on a raised platform the Futuro's appearance is similar to that of most Futuros. 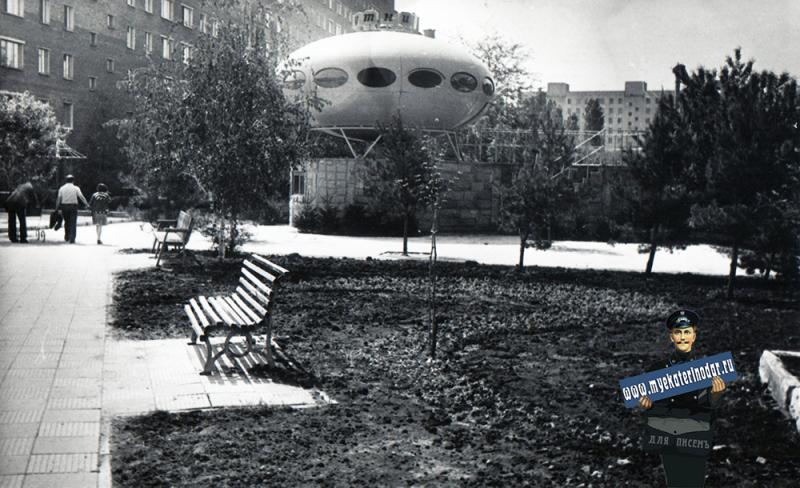 These next two photos show the addition of a "cover" below the Futuro that hides the supporting legs and the space beneath the Futuro. Also noticeable is the fact that the lower viewing windows are covered over. The wall of the structure upon which the Futuro sits is the same in each of the photos.

It appears from the photos as if the orientation of the Futuro might have been changed at one point. If the lower viewing windows are taken as a reference point we can see in the left photo below that they appear to be facing a direction roughly along the fence line. In the right photo below they appear to be oriented at 90°s to the fence line. Might be our eyes deceiving us but that is certainly how it looks to us. The photo at right is likely the later one since photos of the unit as it is now show the orientation seen in the second photo. The photos are of low resolution hence the somewhat grainy appearance. 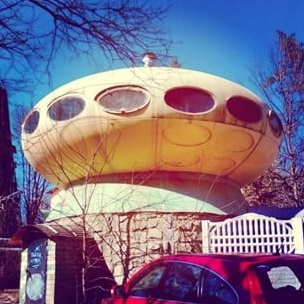 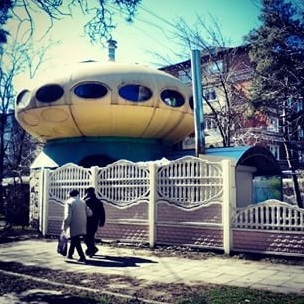 This last photo is a great shot of the Futuro in its current condition following a 2012/2013 renovation. 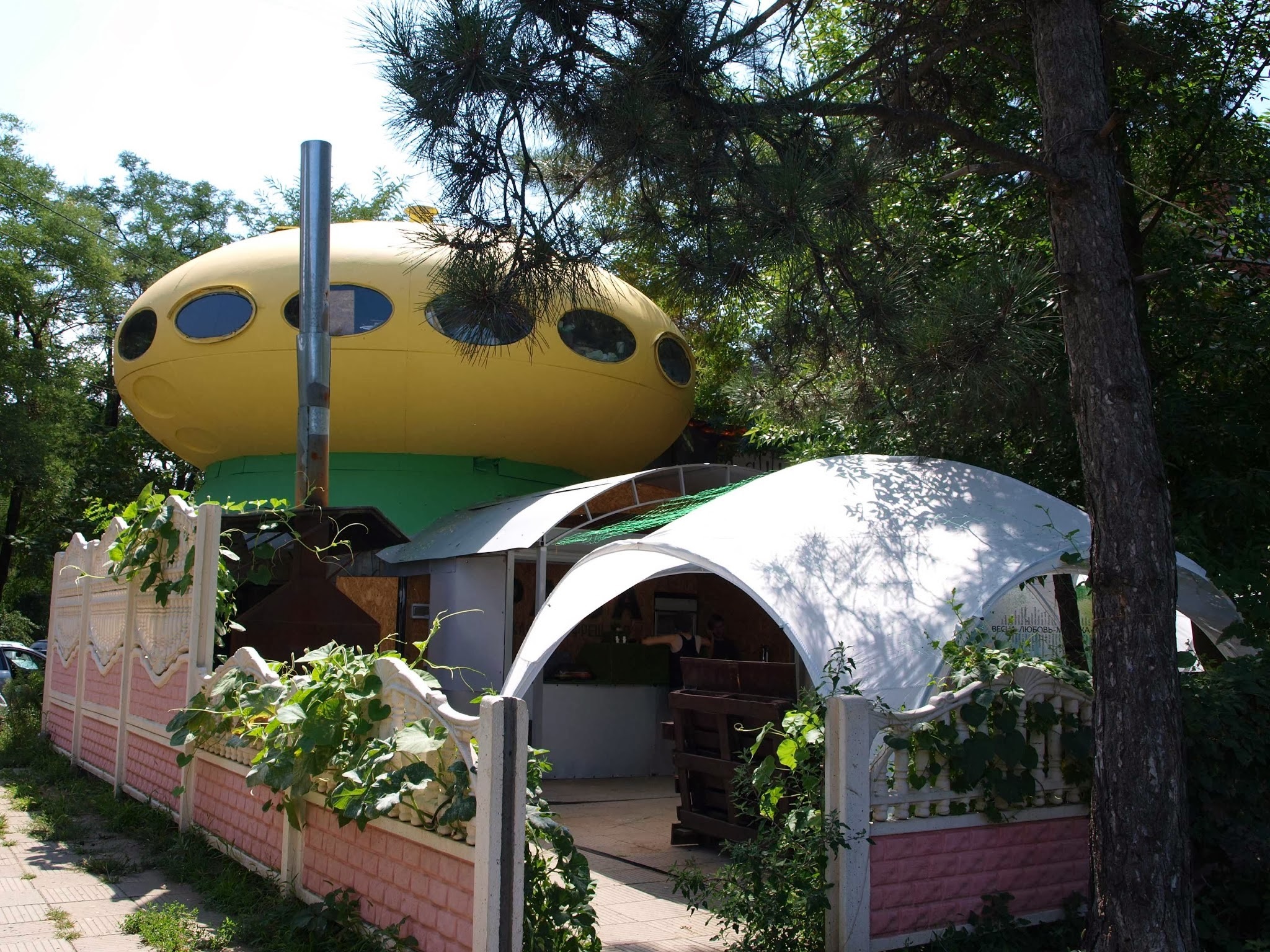 Two of the images originally posted on this page (111514 immediately below) show some kind of a covering structure on top of the Futuro; it is unclear at what point this structure was added and subsequently removed.

In a couple of emails this week Yves Buysse who has made many contributions to these pages told us about a "new" or more accurately a "re-discovered" Futuro located in Krasnodar, Russia; thanks Yves. Everything on the web related to this Futuro seems to be in Russian and Google Translate sometimes has trouble with Russian so if you see anything here that is inaccurate or could be translated more accurately please let us know.

In a couple of March 2013 posts on the website vk.com Khanu Man provides a little history (albeit perhaps somewhat tongue in cheek). The posts, according to Google Translate, are titled "Excerpts from the study "The History of Tea Plates" part 1 and part 2; we have to think this would be more accurately translated as the history of "Flying Saucers" or maybe "UFO's" but who am we to question the almighty Google. On the other hand perhaps we are being unfair to Google and it may be the history of "Tea Rooms" or even the history of this "Tea Room"; we need to learn Russian.

We earlier suggested the posts might be, at least in part, "tongue in cheek" and the posts start out that way. In part 1 Khanu Man starts by telling us:

" Abandoned many years ago disc flying objects began to find around the world in the late 60s of the twentieth century. Scattered across the planet, these flying saucers dominates the minds UFO enthusiasts, serious scholars and ordinary citizens. On top of all sorts of secret services in the best traditions of our relationship to the unknown species were trying to bring their secret research base ..."

and a little later he goes on:

" the world community is not worried, was widely launched the myth that these supposedly plates in 1968 designed the Finnish architect with a difficult to pronounce name Matti Suuronen (Matti Suuronen) and called it "Futuro" (Futuro). Allegedly, he even sold the project to some American company, which had built about 60 of these "flying saucers" around the world"

That said the post does then move on to provide some actual commentary and history and at the end of part 1 Khanu Man references three Futuros in Russia; this one in Krasnodar, the Dombai Futuro and one in Naro. As far as we know there is no Futuro in Naro though there is this "lookalike".

In part 2 of his post Khanu Man reports that the Krasnodar Futuro was "discovered" in 1975 and became a "children's cafe". We are told that despite being on a list of protected architectural buildings in the post soviet era the Futuro was not well maintained but in late 2012 a renovation was undertaken and after some three months the Futuro opened again as a Tea House around the end of March 2013.

The featured image at the top of the page (courtesy of tuda-suda.net) shows the renovated unit; prior to this time the unit had a grey finish. Other images below show the Futuro pre-restoration and the Futuros interior. There is a also a YouTube video below with footage of the interior.

Matti Suuronen's Futuro CV (see "The Finnish 20") lists a Futuro that was manufactured in 1976 that was destined for Sochi, Russia. Sochi is some 300km or so from Krasnodar and Khanu Man indicates the Krasnodar Futuro was on site in 1975; there is also no reason to believe it has ever been moved. Having said that Futuro history is often clouded with inaccuracies and it seems quite possible that this was in fact the third of the Finnish Futuros manufactured for delivery to locations Russia in 1976 and 1977.

Google Earth has historical satellite imagery for the area as far back as 090302 and as recently as 121413 and all imagery shows the Futuro. Current Google Street View imagery is pre-restoration and dates from July 2012. Several screenshots from Google Earth, both aerial and Street View, can be found below.

These first group of images are courtesy of Khanu Man; they accompanied the March 2013 post on the website vk.com discussed above and show the unit as it was before the late 2012/early 2013 restoration. 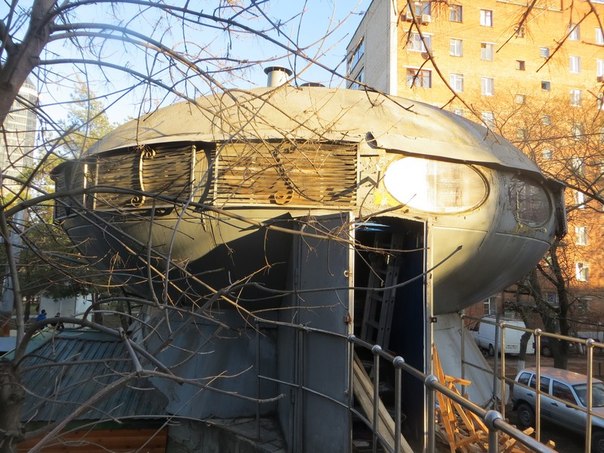 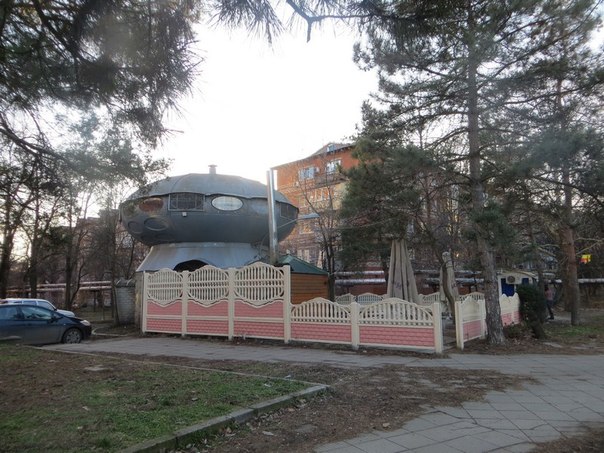 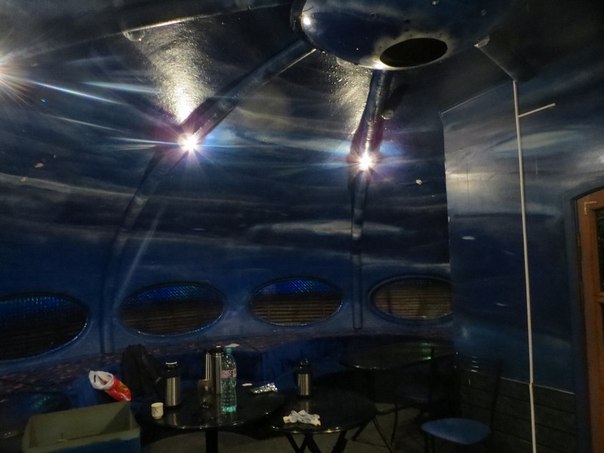 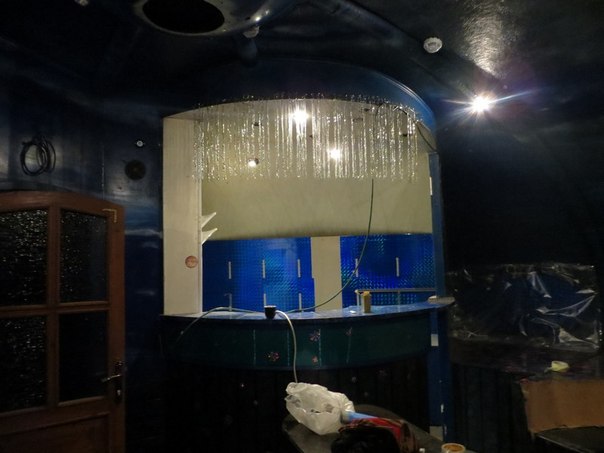 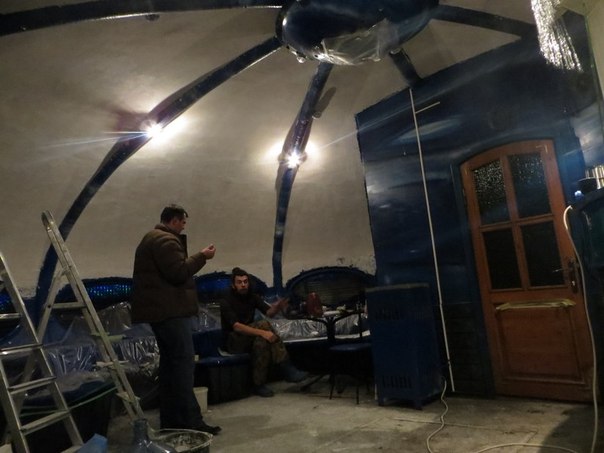 The following photographs show the interior of the Futuro post the renovation. It is proving a little difficult in some cases to figure out exactly how to request permission to display these images. All are attributed to the website where they are posted but if you own the copyright to anything here and would prefer it be removed please let us know. 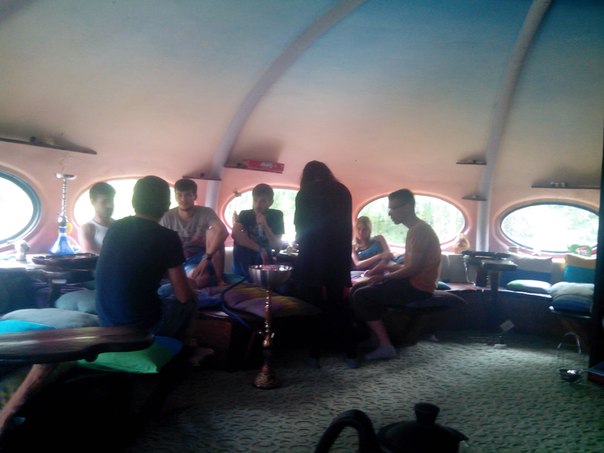 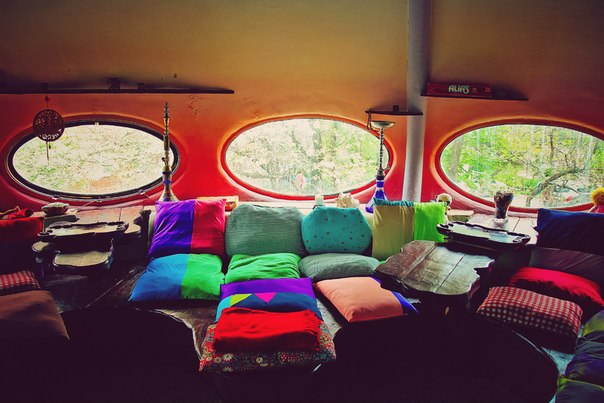 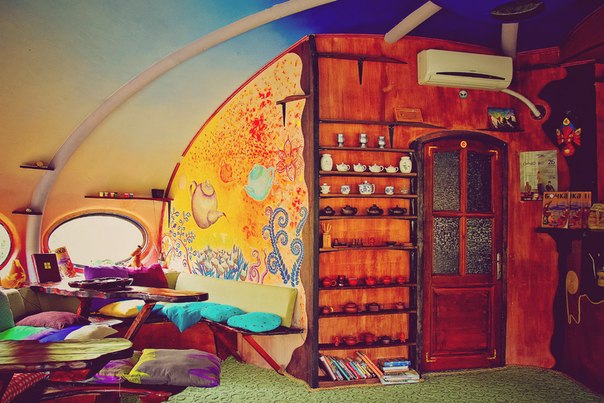 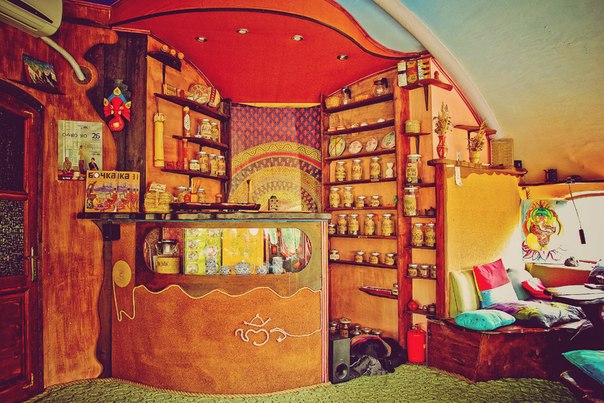 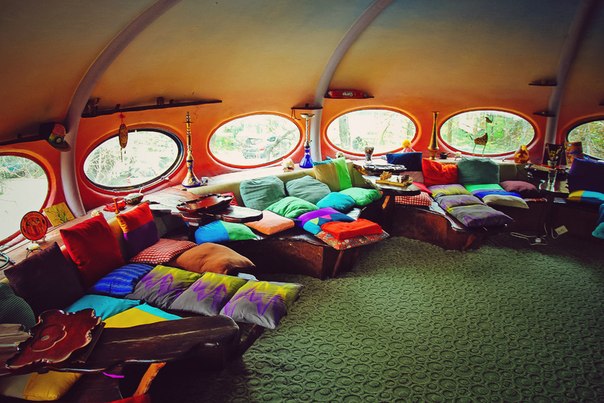 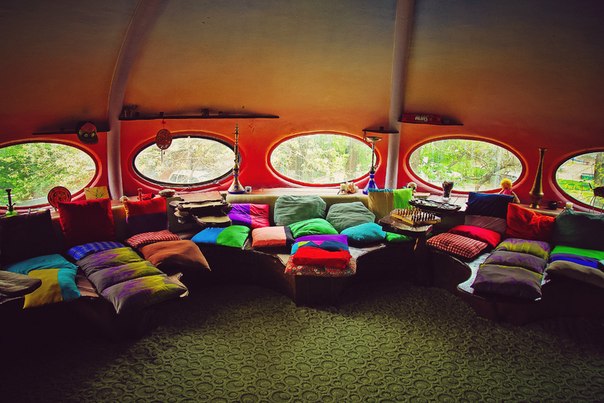 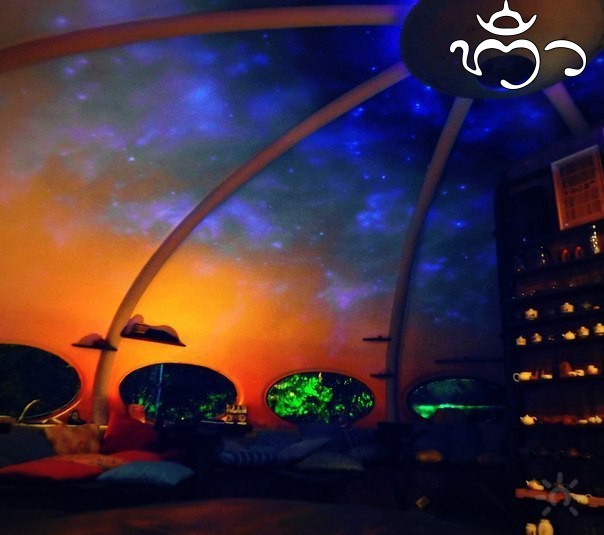 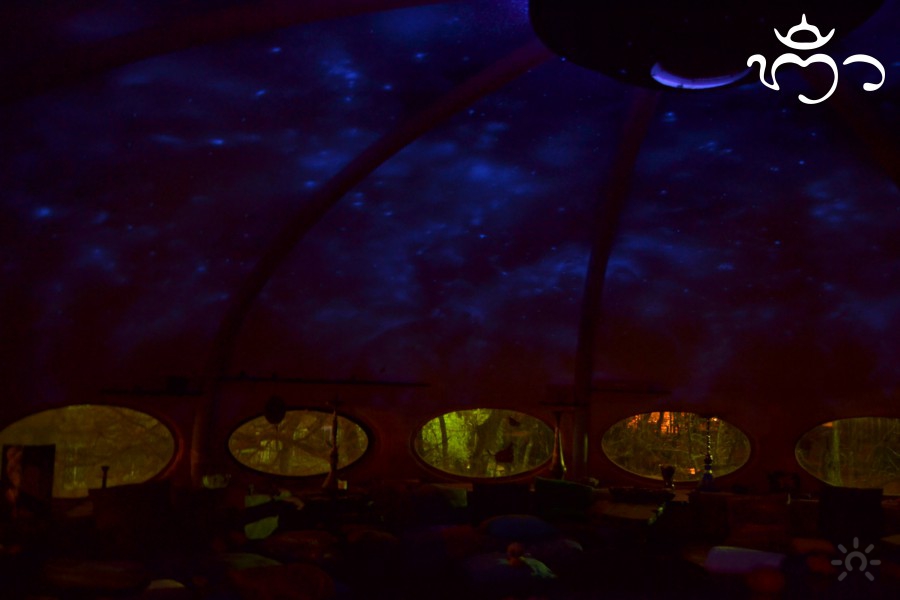 Photos of the interior of the Futuro can also be found on several other websites including krasnodar.zoon.ru, afisha.yuga.ru and gorodskoyportal.ru.

This YouTube video is of a group of musicians; the focus of the footage is the musicians and their music but there is footage of the interior of the Futuro. 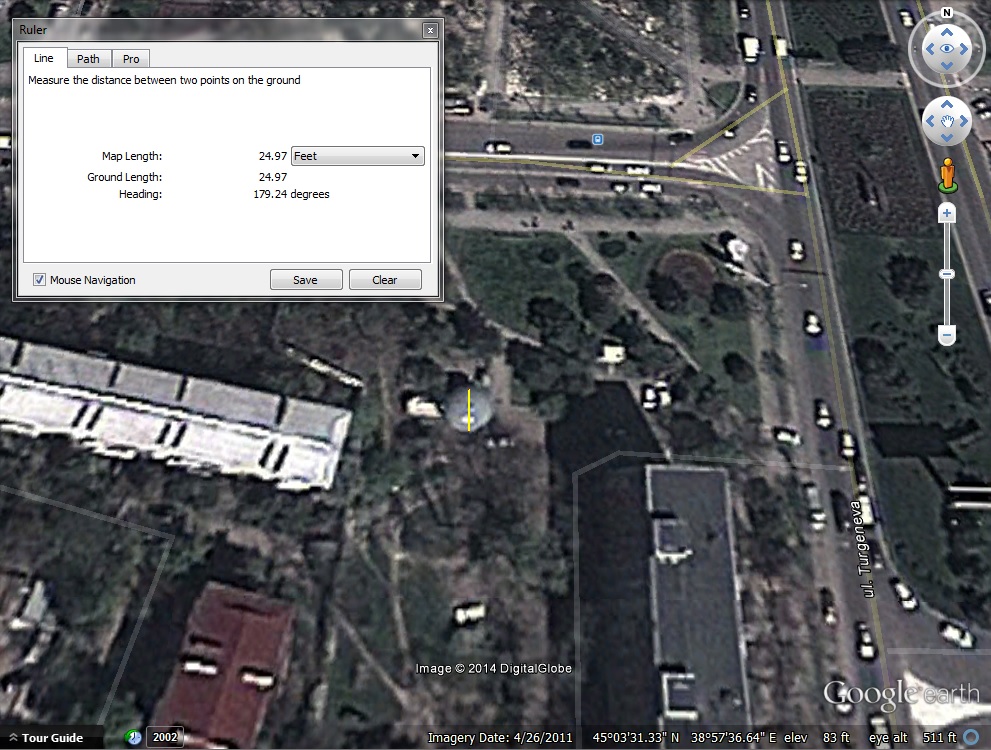 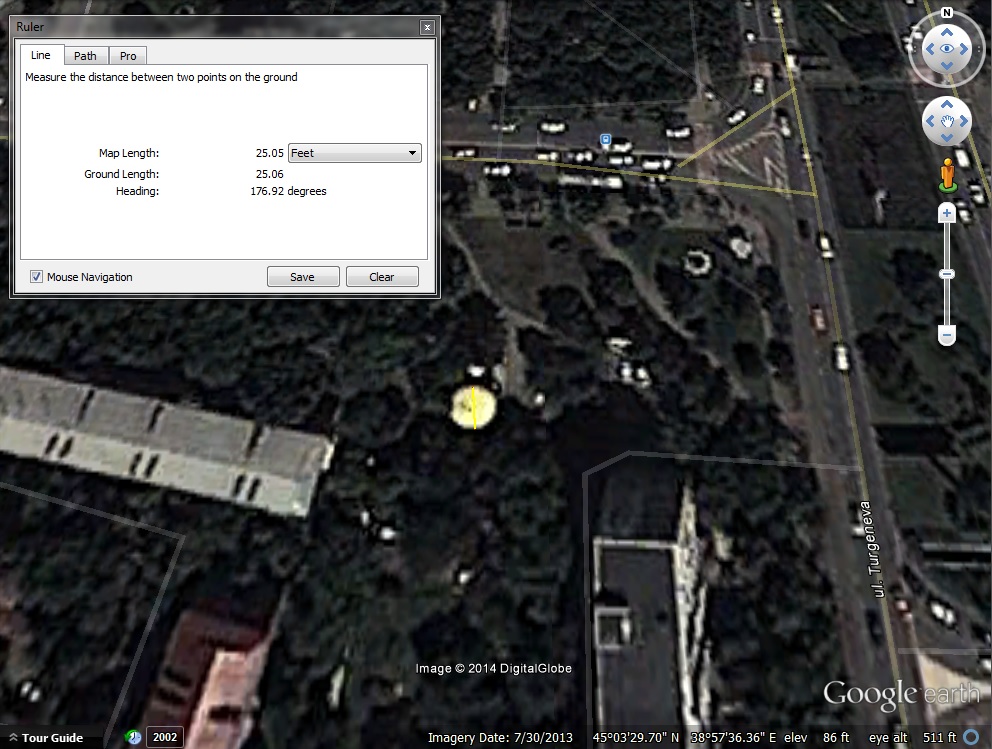 Google Street View imagery is from July 2012 prior to renovation of the Futuro and can be seen in the screenshots below. 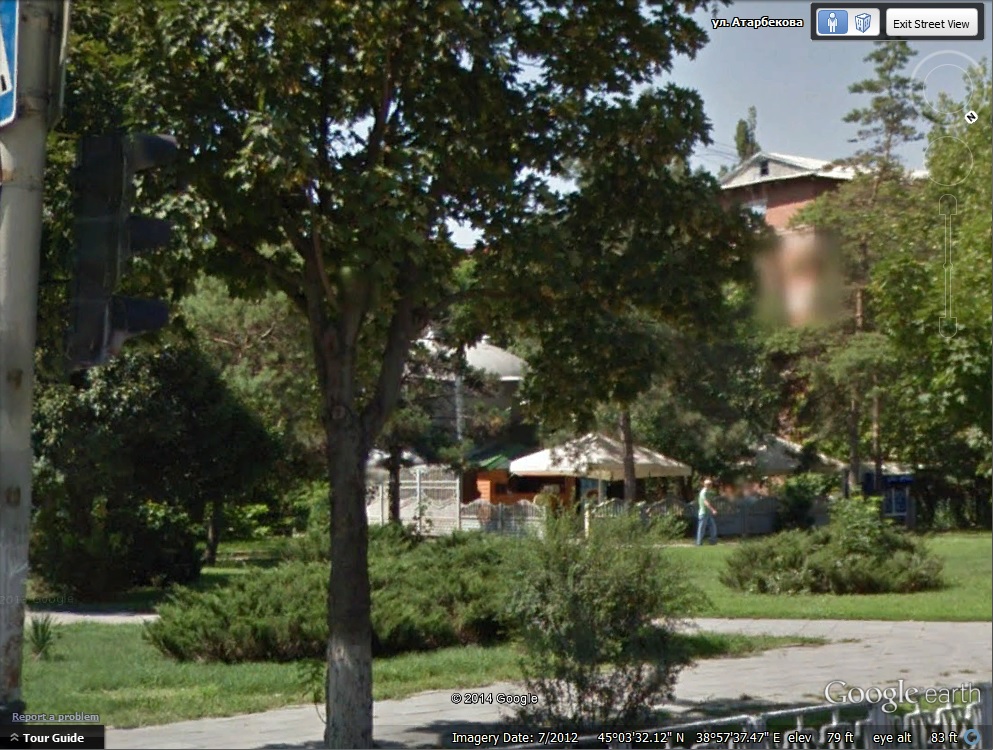 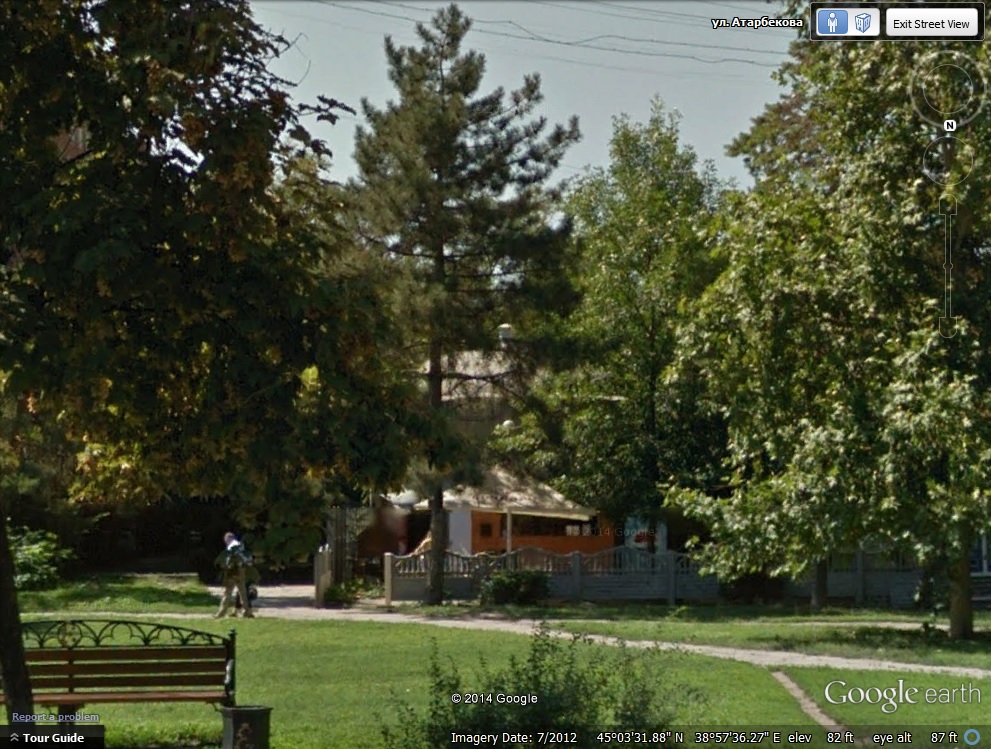