During the course of our ongoing research into the Futuro House we have come across a great variety of things that do not quite fit into any of the other pages or sections of this website and these are collected on these pages categorized as listed below. The content is split into several pages but the entire list of categories is listed and linked below.

This photo was posted to Facebook on 080619 by Alexandr Lebedev. Though there is no description or comment we are assuming it was "fashion related". That said if there were a "real and modern" equivalent of the Amazons of Greek Mythology we think they might very well look like this hence our titling this photo "The Amazon". 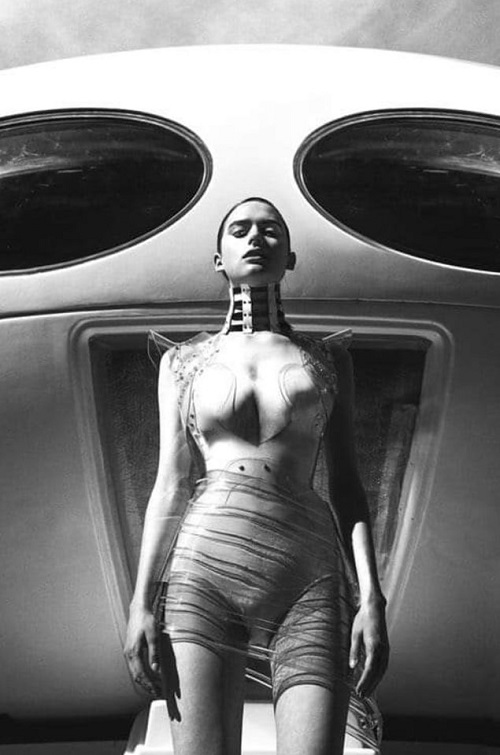 Futuro inspires all manner of art and craft projects but this is perhaps one of the most unusual examples in which we see epleskrekk using an apple as a canvas for a representation of Futuro. While it is not exact there is no doubt that the "apple carving" is indeed Futuro inspired. 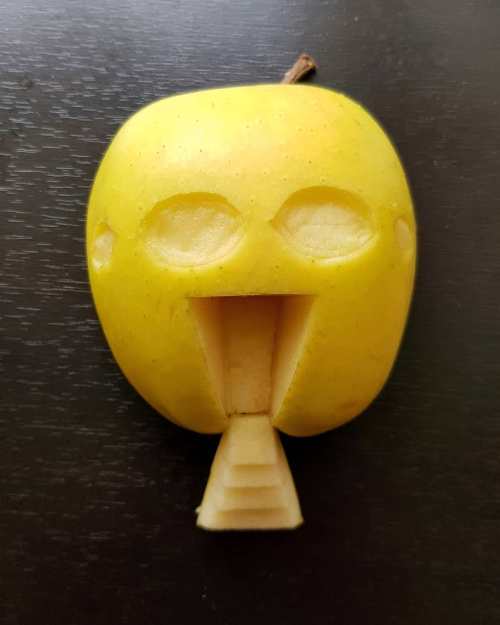 We were not sure initially whether we would add this photograph by Frank Schott to this section or to "The Photoshops". No idea whether Photoshop was actually used but regardless of the origin of the photo the Futuro has been added later. We eventually decided to include it here in "The Arts" as an example of "Fine Art Photography" largely based on price. 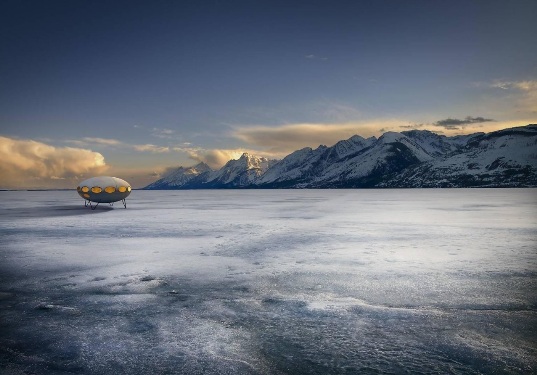 There are times when we find the line between "art" and "photography" is a fine one (pun intended) though perhaps there simply is no line! Anyway this photo is from the series "Infra Realism" by Kate Ballis who, on her website's homepage, describes herself as a "Fine Art and Commercial Photographer". We are going to assume this particular series falls in the "Fine Art" side of her work.

This specific photo is of course a shot of the Idyllwild Futuro seen in the blue, red and purple hues characteristic of Ballis' "Infra Realism" series. 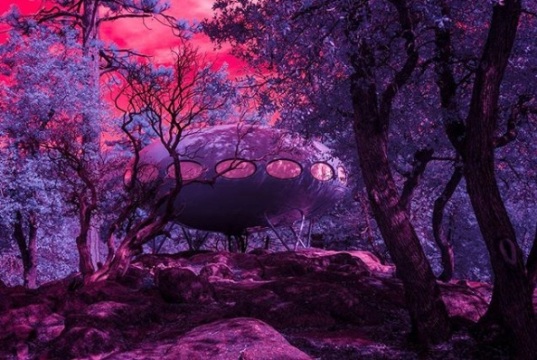 Curated by Germano Celant and running from 090415 through 022116 at the Triennale di Milano in Milan, Italy the exhibition "Kitchens & Invaders":

"takes its inspiration from the title of the science-fiction novel The Body Snatchers, written by Jack Finney in 1955, and from the film based on the book and directed by Don Siegel."

We have to confess that we are not particularly "arty" people and when it comes to imagery and art we have always found we do not really understand the idea of having to "interpret" something - modern art or impressionism come to mind - for us an image, be it photo, painting or drawing, ought to actually look like the thing it is supposed to represent; that presumably means we lack imagination but like all of us "we are what we are".

The fact that this exhibition is included here is clearly based on this idea of interpretation but, since this site is about all things Futuro, we felt it had a place here. Dedece Blog tells us that:

"The exhibition opens with an interpretation of the Futuro House, a visionary prefabricated dwelling unit designed by Matti Suuronen in 1968."

This remark is immediately followed by the first of the two photos below. There is no caption so we are not certain but the implication is that this photo illustrates this "interpretation" of a Futuro. we do not see it; perhaps you do. The second photo is the graphic that heads the article on Dedece Blog; not actually sure who created it but it is not credited to anyone else so we are assuming the authors of the article - it is a rather cool Futuro related graphic. 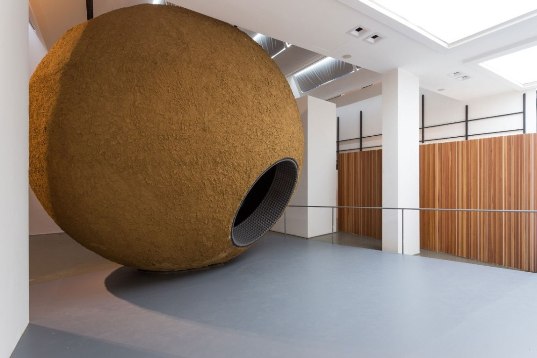 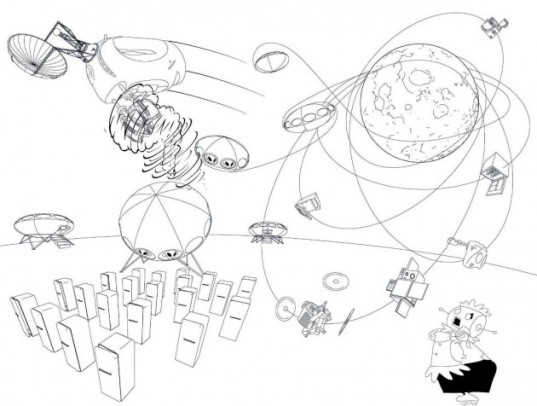 Photographer Tom Blachford's ongoing photographic series "Midnight Modern" is described as being "an ongoing series and exploration into the interplay between Architecture, Moonlight, Mountains and the tension of an unspoken narrative". We do not pretend to "get" art and we have no clue how to interpret the phrase "tension of an unspoken narrative" in the context of the photos but we will say this - the photo of the Idyllwild Futuro shown below, one of those in Series IV of "Midnight Modern" is absolutely one of our favorite all time Futuro photos.

At the time of writing through 030318 "Midnight Modern Series IV" is on display in Sydney, Australia at the Michael Reid gallery. The Futuro photo is available for purchase at $3500 unframed and $4700 framed, a little "rich for our blood" despite the fact that we do love the photo. 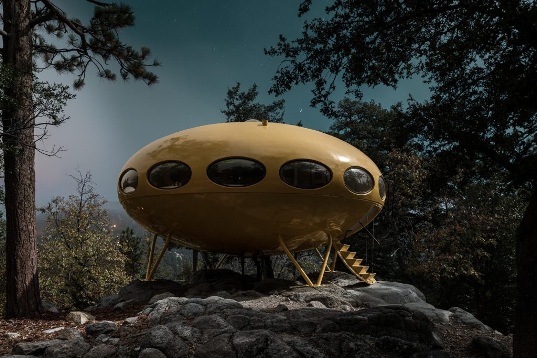 "... an immersive experience on a grand stage in which art is consumed through all of the senses. The project will run over a number of installments. Chapter Three will take place in early 2016. The experience will unite the senses through food, scent, drink, movement, sound, and environment."

and then goes on to tell us that:

"Chapter Three/FUTURO is inspired by the round, prefabricated flying saucer-shaped house "Futuro" designed by Matti Suuronen in the late 1960s. This house and many other ideas from that time dreamed a vision of a utopian society that is lost to us now - replaced by a gloomier, dystopian image of the future. Waldorf Project will bring back these incredible ideas, creating a distilled interpretation of these concepts in a minimal yet radical performance .. all disciplines will be engaged and synchronized: from the visionary set and product design through gastronomy to light and sound. Everything will be thought through and interwoven to give the guests a complete emotional journey to the future."

The project website uses images of the Futuro as backdrops to its pages including Royse City, Dombai and Turenki but beyond that we have not been able to figure out how Futuro actually figures into the project. The website Brummell informs us that:

"The project creates large-scale installations that aim to stimulate all five senses - through performance art, music and a dining experience - while exploring a theme ... as nine leading names in gastronomy, visual art, design, theatre, electronic music, choreography and mixology come together for one event."

Perhaps some of you can figure out how Futuro fits in; unfortunately we cannot but, since Futuro is mentioned, The Waldorf Project earns its place on these pages.

Among the vast number of "Zippy" comic strips Griffith has created over the years there are three that feature the Futuro. Signed prints are available for purchase on the "Zippy" website.

The Futuro has inspired artistic works in a whole host of mediums; here we have a Futuro inspired collage by ticketstofuture. The original can be found on Instagram here. 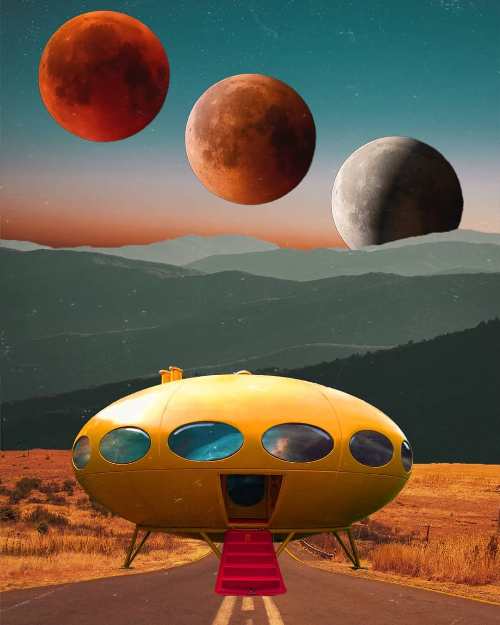 Futuro inspires all manner of creative projects and here we have what is almost certainly one of the best tasting we have come across. It is the creation of @casadomingacafe who created this Chocolate Futuro which is designed to become a candy box filled with different chocolates and cookies from @casadomingacafe.

The photos below show the Chocolate Futuro and the mold from which it was made. The original photos can be found on Instagram here. 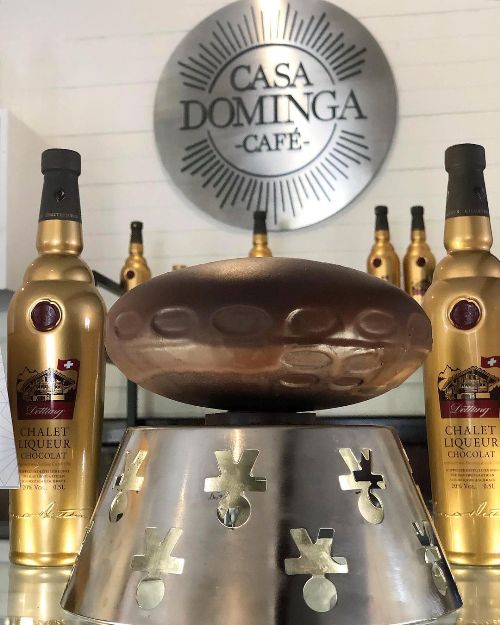 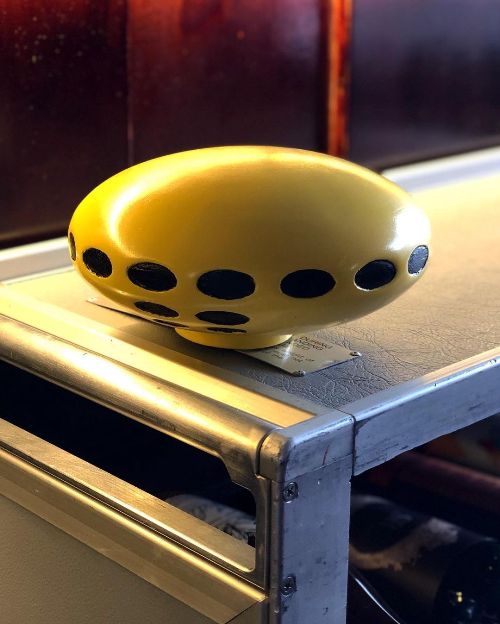 Dr. Barney Vincelette, owner of the Houston Futuro, who has lived in his Futuro for some 37 years (at the time of writing - since 1977) recently sent us the following snippet:

"Shortly after I moved into mine a salesman telephoned me to offer me the best price on new roofing and aluminum siding. He stubbornly insisted that he could do this to any house."

We might have been inclined to have him try - we think that would have been something to see!

If anyone has any interesting or funny anecdotes or one-liners relating to the Futuro House that could be added here (particularly you owners out there) we would love to hear them.

Sydney artist and arts worker Daniel Soma created a Futuro related art installation for The Finnish Crazy Games [092317-092417] at the Embassy of Finland to Australia as part of the celebration of the centenary of Finnish independence.

The installation reprises Daniel's 2016 case study and exhibition, FUTURO!, that took place at the Interlude Gallery, Sydney, Australia between 041416 and 042316.

The first two photos below are impressions of the 2017 installation. The following three photos are from the 2016 event. 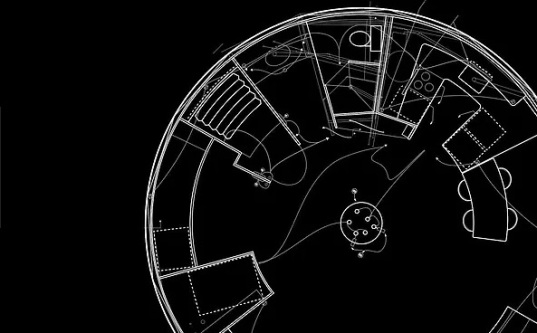 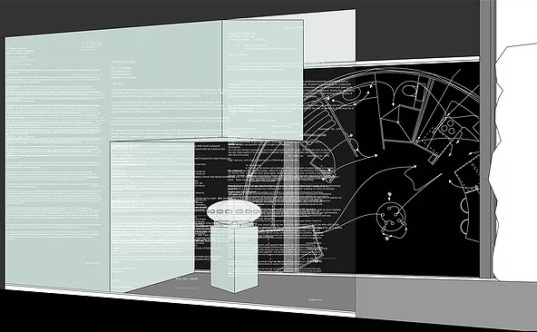 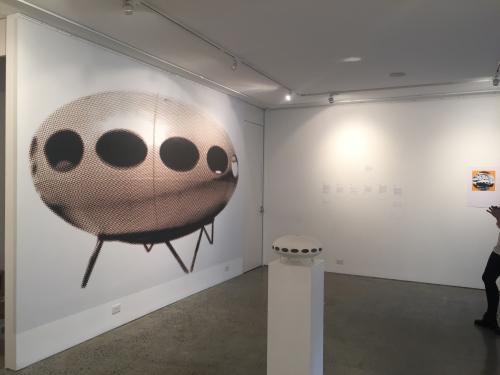 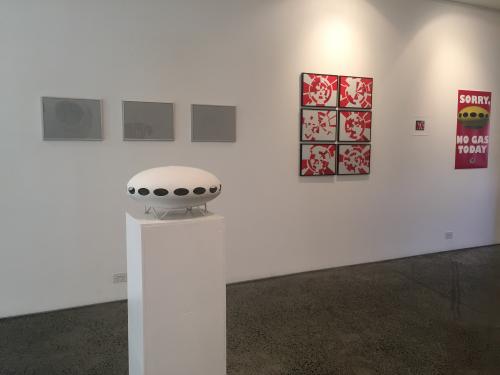 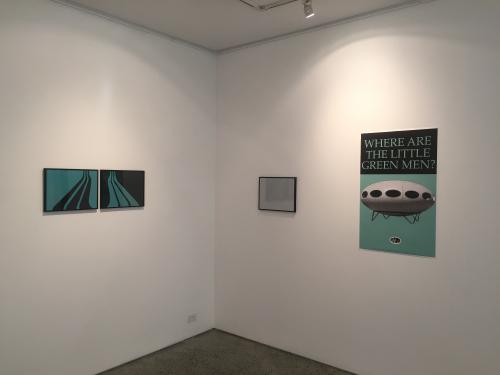 We recently came across The Futuro Cafe (located in Kasugai, Japan).

It appears that the cafe is named and, at least in some small part, themed for Futuro but bears no actual relationship to Futuro (the two Japanese Futuros in Maebashi and Karuizawa are hours away).

The screenshots below are from honda.co.jp (first two) and futurocafe.com and they clearly show that the business uses Futuro as a name, a logo and a theme element.

The cafes website tells us that (according to Google Translate):

The reason for choosing the store name is ... The cafe concept is "a different space where you can relax like a house." 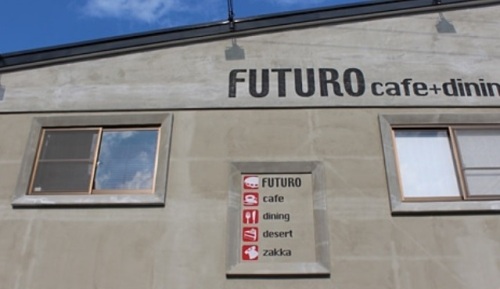 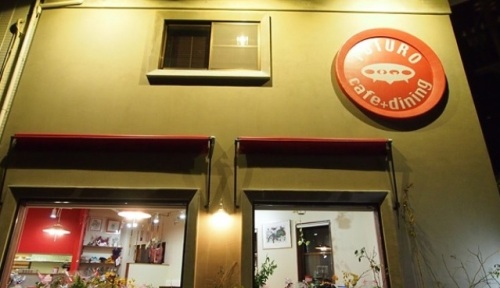 The Kunsthaus Schöne in Andernach, Germany ran an exhibition devoted to Charles Wilp in 2016 [012316-033016]. German advertising designer, photographer and artist Wilp had owned the Futuro once located in Wittlaer, Düsseldorf and subsequently demolished.

On 012316 the exhibition was opened with a talk about Futuro given by Wilp's widow Frau Ingried Wilp. As a part of the opening ceremonies a Futuro Cake was created which can be seen in the photo and videos below.

It is possible the talk may have included some interesting history of Wilp's Futuro but since the language is German we cannot follow along. If you happen to speak German and you watch these videos we would love to hear about anything new or interesting in Frau Wilp's talk. We can be contacted directly by email or by using our Contact Form. 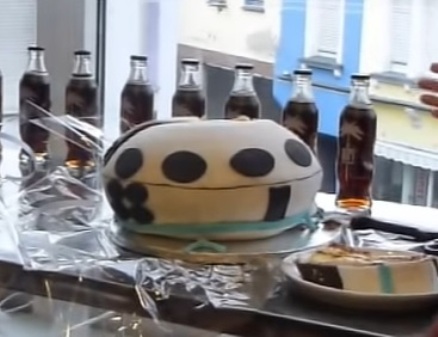 Jo Vargas Interactive Design & Publishing publishes a cool Children's Coloring Book called Sweet Homes. The book contains some 40 architectural images for kid's to color and among them is the Futuro House as seen bottom left in the sample shot from Jo Vargas' website.. 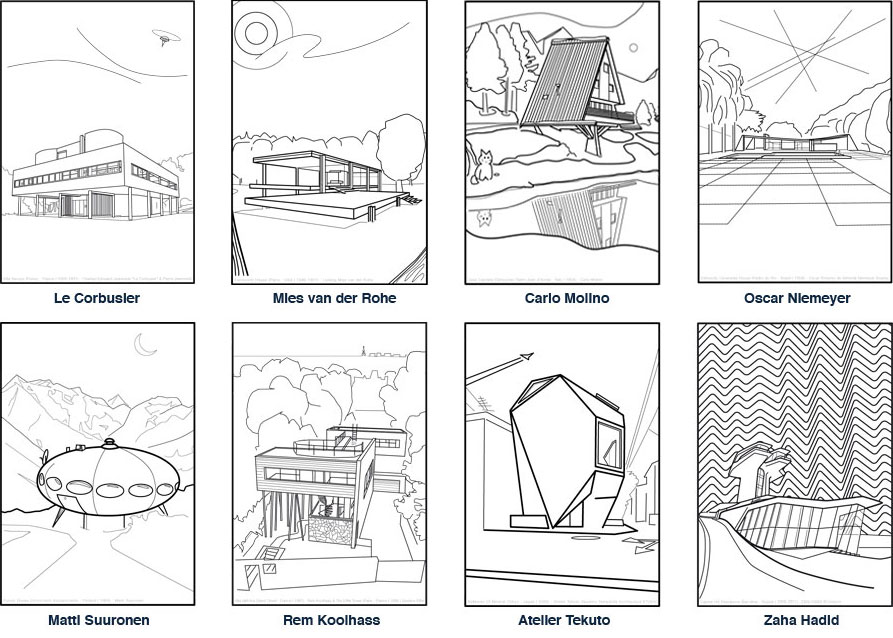 If anyone happens to know the name of this book or even where we might possibly obtain a copy please let us know. 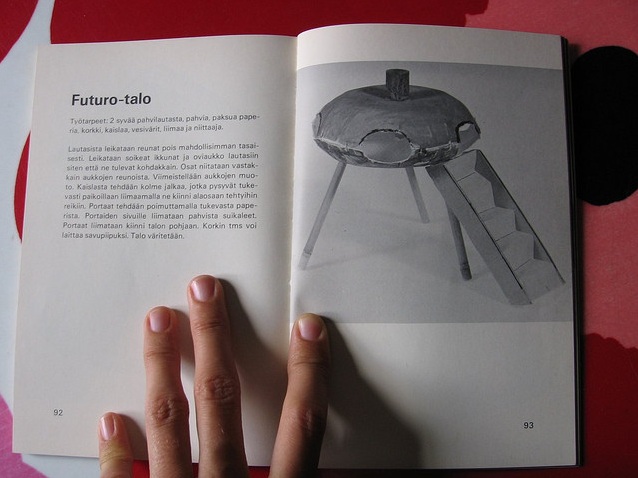 Came across an interesting collection of Futuro drawings recently. They appear the result of some kind of school project perhaps involving learning about the Futuro and then producing artistic interpretations of the Futuro. The shot below is a sample of the work but there are many more; check it out here. 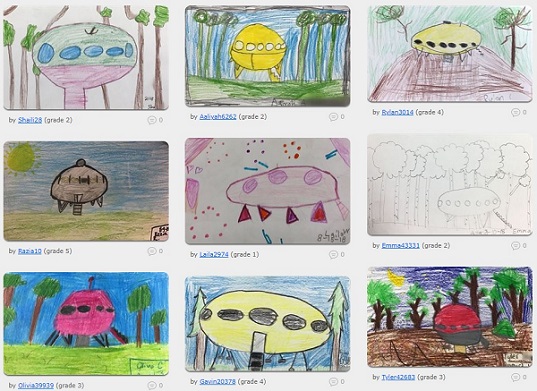 This photo of a rather cool looking Futuro inspired Christmas Ornament was posted to Instagram by basvanbeek_official. In the comments on the post it appears these will be for sale around November 2020; definitely something we will be looking to add to our collection. 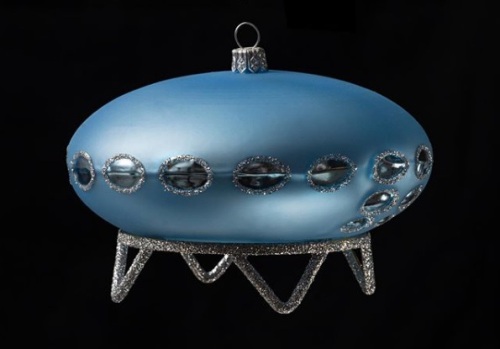 We recently came across this rather unusual photo featuring a Futuro themed costume that was posted to Facebook a few months ago by EMMA (Espoo Museum of Modern Art).

The photo was described this way by EMMA (according to Google Translate):

"Museum Festivals, which were virtually celebrated in early March, are available for free viewing on our website. In space workshops, among other things, you describe your own toy in a weightless space flight, hear a fairy tale, observe the stars with self-made telescopes, and learn to measure time playfully.

The workshop videos are subtitled in Finnish, Swedish and English. You can select subtitles from the cc button at the bottom of the video."

The videos referenced and more information can be found on the Emma website here. 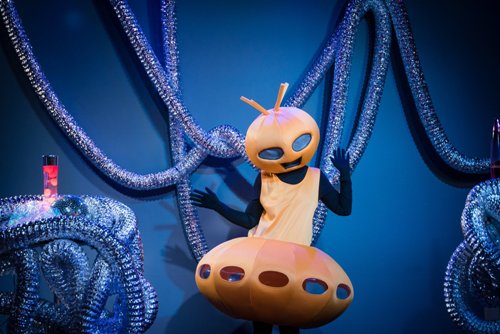