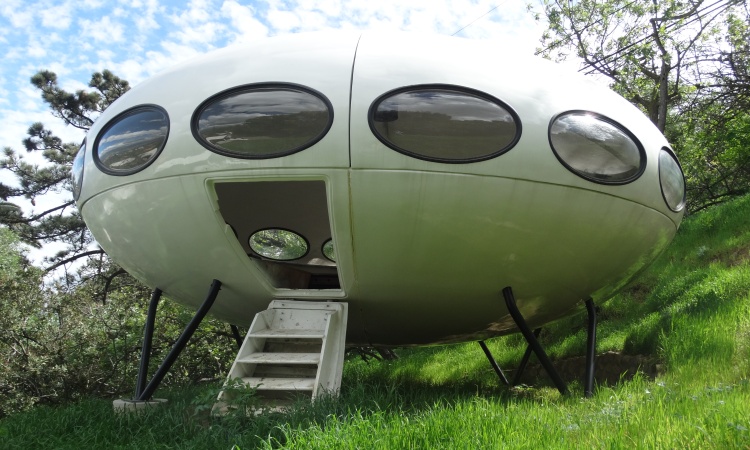 These two videos feature interviews with Mark Haddawy, owner of this Futuro. Neither video is actually about the Futuro.

The first, titled "Talking Watches With Mark Haddawy" is, unsurprisingly, centered around Mark Haddawy's passion for collecting watches. That said the Futuro does pop up twice though the course of the footage at 0:26 and 8:36 and each time there is a truly magnificant view of Mark's home, John Lautner's 1956 Harpel House, with the Futuro nestled behind it. In between there is also some great footage of the house and of some of Mark's classic cars. Worth watching; a real treat even without the Futuro and even better with it.

The second video is squarely focused on talking about the Harpel House but it also offers some views of the Futuro at 0:31, 1:35 and 3:02. The second appearance is some nice close up footage and the final one is an awesome night shot.

The later parts (24 seconds in) of this Kim Kardashian Fendi ad were shot at the Harpel House and the video ends (37 seconds in) with a shot of the Futuro.

We came across these two nice photos on Instagram in the past week. The top photo, by cyknyc is from 060616 and was taken from the Chemosphere. The second photo, dated 101016, is by noremac91. 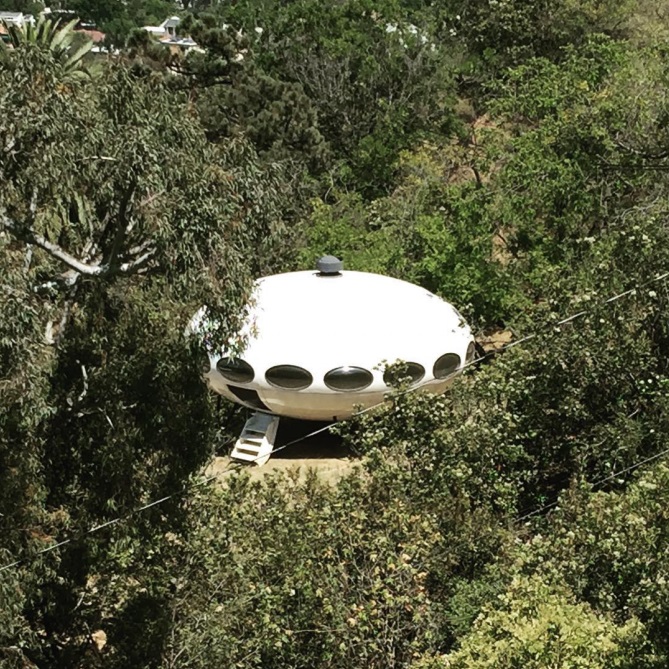 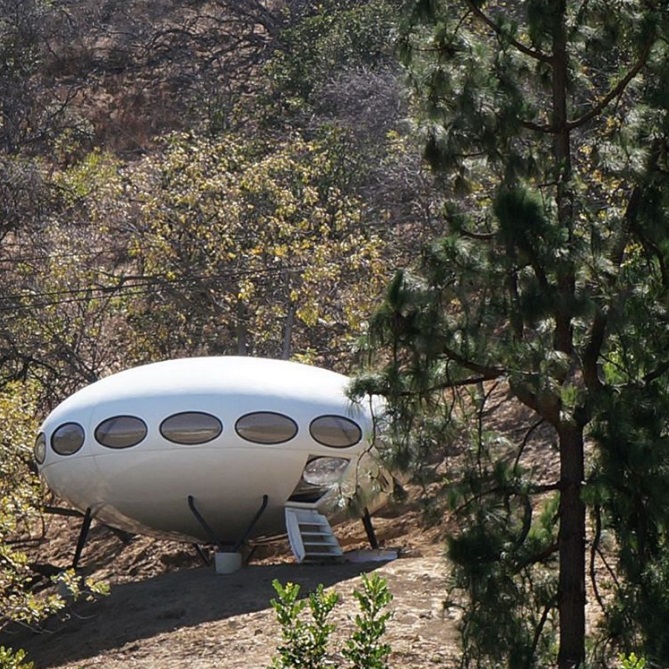 Art Barrett contacted us recently and also sent us the interesting photo below. Art drove this Futuro from Bailey, CO to its current location and the photo was taken during that journey. Art tells us that the drive was more challenging on the LA end; having driven up Mulholland to get to this Futuro in LA we can see why that might be. Many thanks for sharing the photo Art. 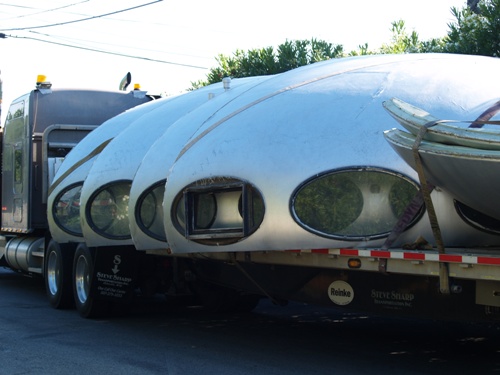 A conference related to the "day job" took us to California recently. Not that it was anything to do with the Futuro for some reason the conference organizer's saw fit to place an IT conference at the Disneyland Hotel in Anaheim and let us tell you, you sure do "pay for the mouse".

Anyway we added a couple of days out in California after the conference and on 022815 we were able to visit the John Lautner's spectacular 1956 Harpel House and the Futuro perched on the hillside behind it. Our thanks to owner Mark Haddawy for inviting us to visit his home and his Futuro (and posing in the "obligatory "tourist" photograph).

We visited Rodeo Drive prior to taking the trip to the Futuro and our route there, along a section of Mulholland Drive, was dotted with "turn outs" that featured stunning views. When we arrived at the house we found a steeply inclined driveway up to the house which then circled back around the rear of the house. On entering the house the view was quite simply awe inspiring and Mark and India took time out of their day to chat while we took in the view before heading out back to the Futuro.

The Futuro itself is located behind and above the house in a steeply inclined back yard. What is not evident from other photos we have seen of the Futuro is the view from the Futuro over the top of the house to the valley spread out below; though the photos do not do it justice an idea of this view and the truly spectacular location of the Futuro can be seen in some of the photos below.

Period documents (such as this one courtesy of the Hedberg Public Library) indicate that US Futuros were manufactured in eight sections with four quarters being joined mechanically and then sealed to create two hemispheres, one upper and one lower. In addition there are several examples of Futuros being delivered in just this fashion; for such an example see historical information relating to the Frisco Futuro's original delivery from the factory.

Mark tells us that his Futuro came from Colorado in eight sections so either it had not been joined and sealed or at some point post manufacture the joins and seals had been reversed.

The Futuro sections were delivered to the street and then "man handled" up the steep slope to the current site where they were then assembled. The area where the Futuro is located was tough enough for us to get around carrying nothing but a camera; Mark tells us he had a group of individuals assisting in the task but nevertheless it must have been quite challenging.

Mark is planning on completing restoration of the Futuro over time. To date the exterior has been refinished and the flat windows that were installed when Mark purchased the Futuro have been replaced with "domed" windows. At this time the interior remains empty.

Once again we want to extend our thanks to Mark for inviting us to visit and allowing us to share photographs of his Futuro here. Hopefully sometime in the future when the unit is fully refurbished he might be persuaded to put up with another visit; it would be really interesting to see the completed project.

The photos provide a nice look at Mark's Futuro along with some idea of the fabulous view over the LA skyline from Mark's home. The two interior photos towards the bottom illustrate that while the interior flanges at the joins between sections show some deterioration they are not nearly as bad as we see in some other Futuros (for example the Royse City Futuro). The final two photos clearly show that the construction of this Futuro consists of eight sections with each hemisphere, upper and lower, being manufactured from four segments or "quarters". 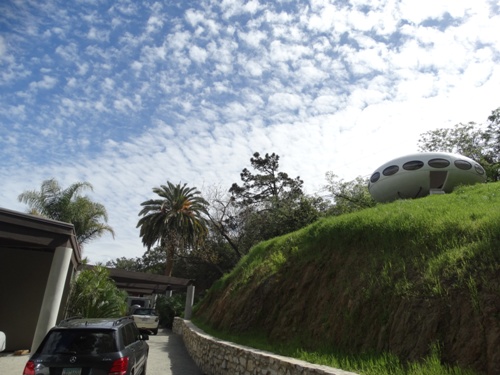 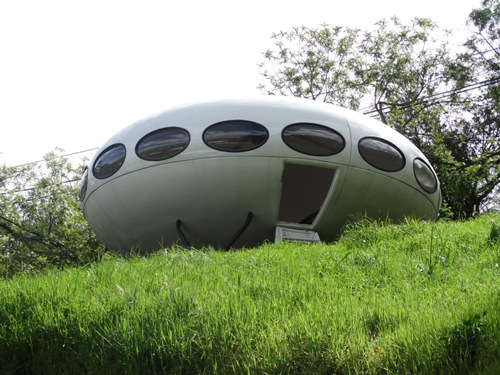 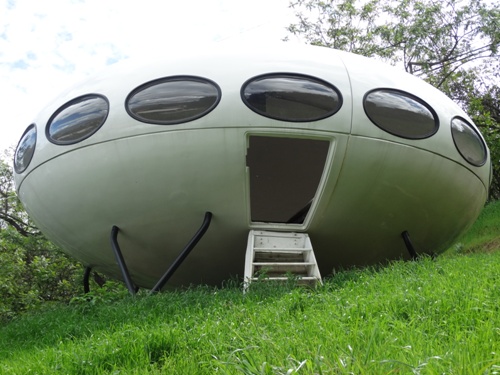 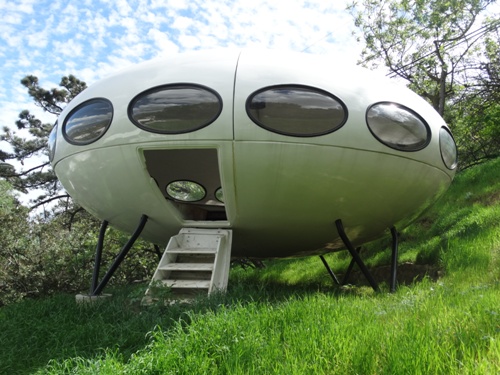 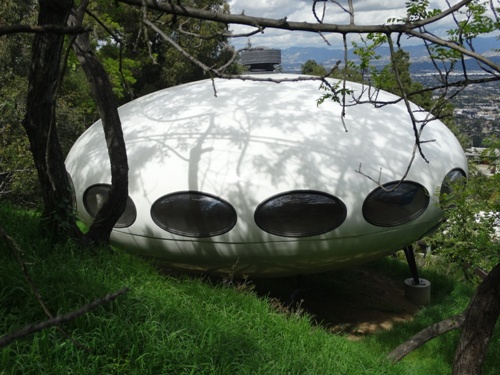 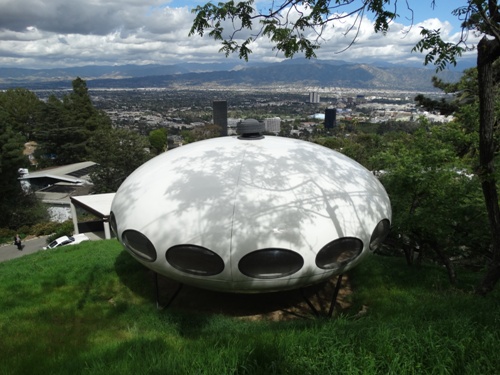 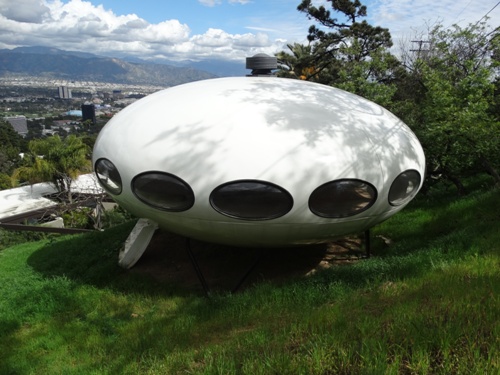 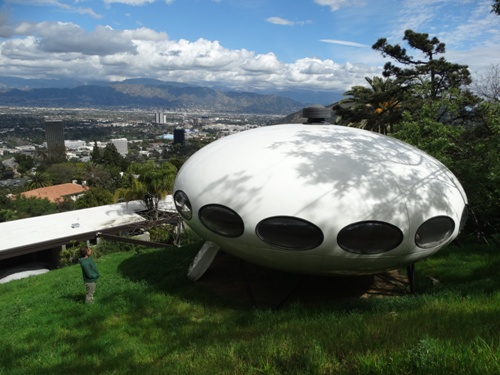 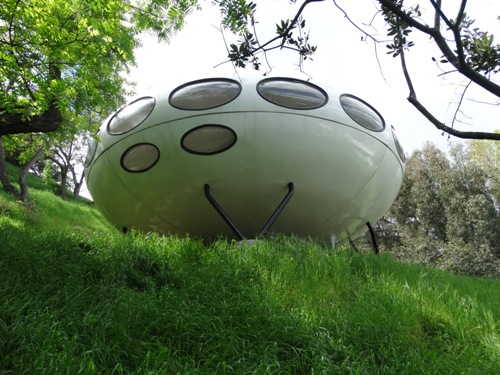 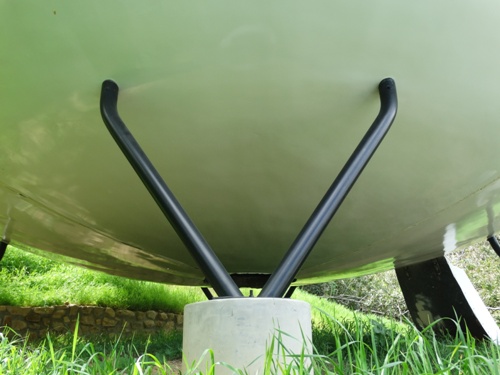 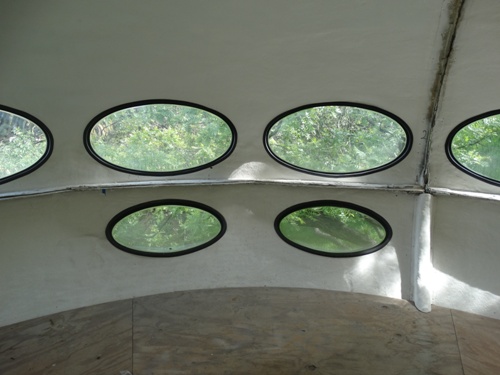 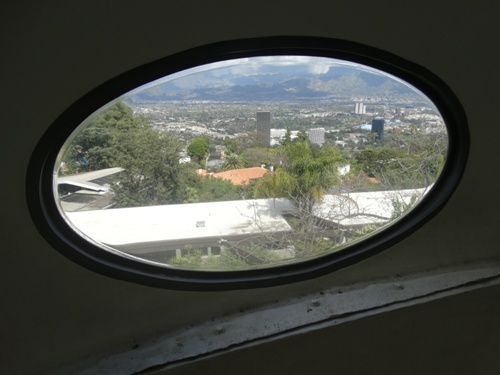 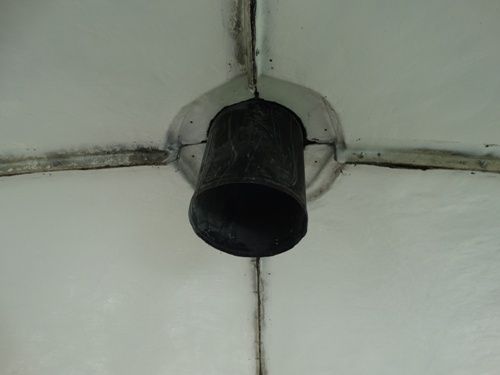 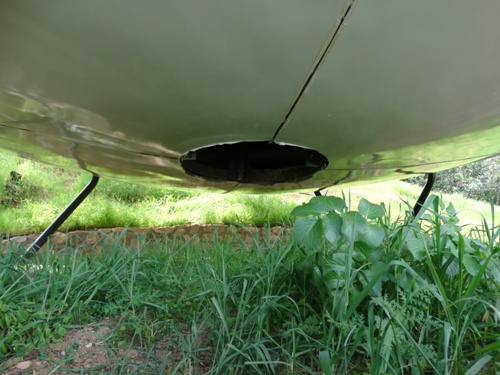 In an interview in Volume III Issue 20 (Fall/Winter 2013/14) of the French Fashion Magazine Purple Magazine, Mark Haddawy confirms that this Futuro is indeed the one from 715 Clark Road, Bailey, CO, USA. Mark indicates he has spent the last four years restoring the unit after buying it in a (2009) "design auction".

The interview can be found here. The relevant question and answer reads as follows:

"OLIVIER ZAHM - Can you tell us about the '70s bubble house?
MARK HADDAWY - Matti Suuronen designed the Futuro house in 1968. I bought it in a design auction and had it moved to Los Angeles from Colorado. I've spent the last four years restoring it."

The article was accompanied by this photograph displayed courtesy of Purple Magazine. 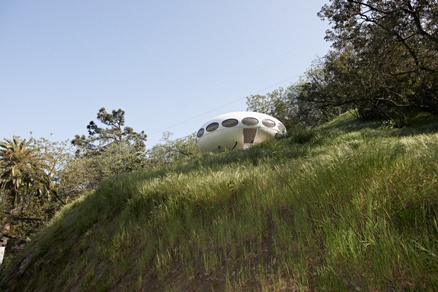 The photo below was published in a forum thread on Skyscraperpage.com by 3940dxer. The photo is not precisely dated but the narrative of the 092513 post indicates it was taken "last month" so the photo is probably from sometime in August 2013.

Other than the fact that it is a great close up shot of the Futuro what is really interesting about this photo is that it looks like the Futuro is about to get a paint job. The bottom section of the Futuro and the windows are masked with plastic (blue painter's tape is clearly visible) suggesting perhaps the upper section is going to be painted a different color. We await with interest a more recent view of this unit showing what might be a changed appearance. 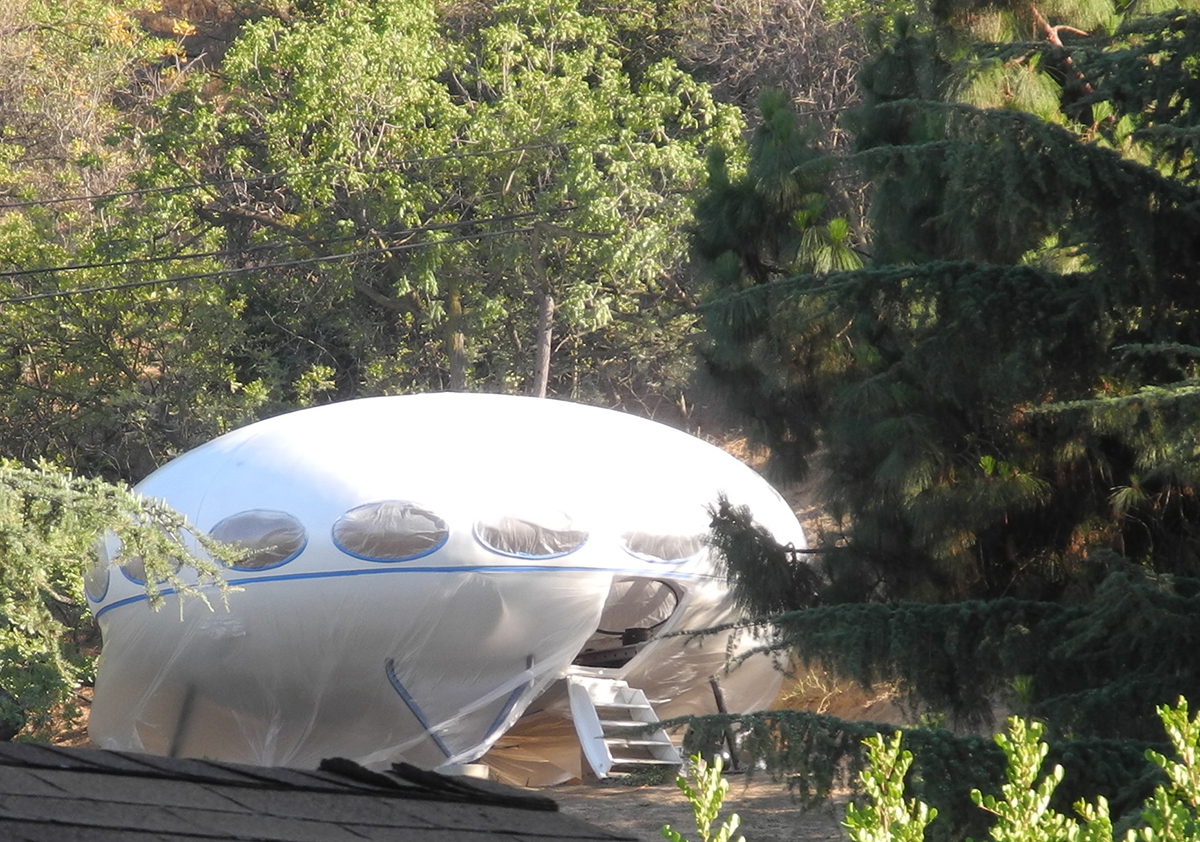 While researching the Bailey Futuro today for the "Lost Souls" page it became apparent that there is a real possibility that this Futuro is in fact the one that was in Bailey, Colorado that was sold at auction in 2009. Cannot be certain which is why we have left "Bailey" in the "Lost Souls" section but it does seem a very good possibility. Details can be found in the Bailey article.

Nestled in among the million dollar residences in Nichols Canyon, Los Angeles is the John Lautner designed Willis Harpel House and set on the hillside behind the house is a Futuro House. The Harpel House is one of Lautner's most critically acclaimed residences and has recently been restored to its original condition by the current owner Mark Haddawy after a previous owner had extensively altered the building. Following renovation of the main house Haddawy is now restoring the Futuro.

We do not know where this Futuro was located before being brought to Nichols canyon but the move is a recent one which can be pinned down to somewhere in a 6 month window in 2009; imagery from 052409 in Google Earth shows that the Futuro was not on site at that time but it can be seen on site in later imagery dated 111409.

We have not come across many photos of this Futuro. The photo below, taken 032110, is by srd515 and displayed under CC 2.0 license. A couple of other photographs can be found as follows: 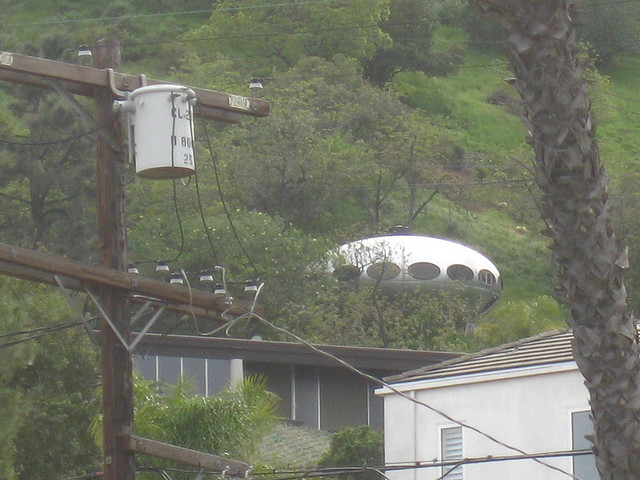 This photograph by spacerita taken 051221.