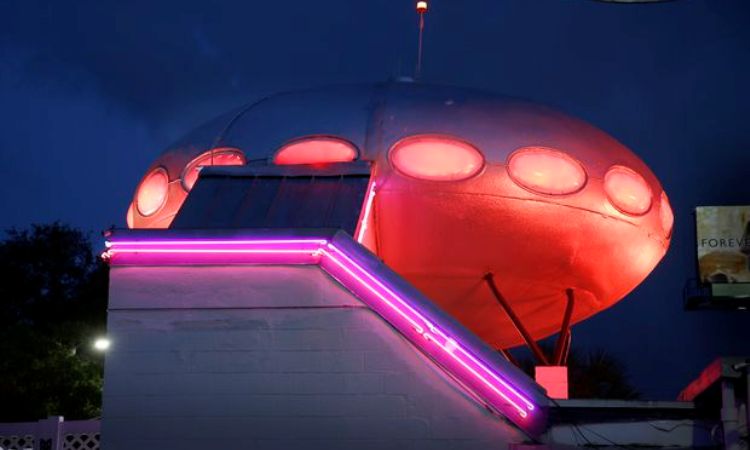 This rather nice photo was sent to us by Jim De Mauro; the photo was taken 083019. 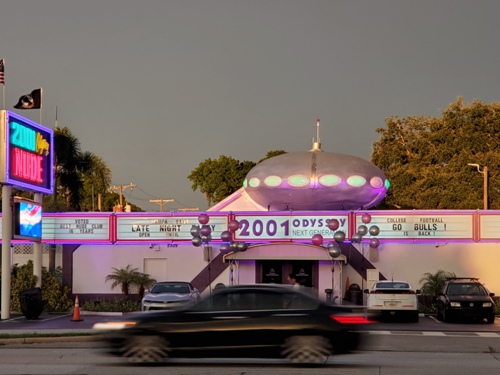 In early July 2019 Tampa Bay Times journalist Gabrielle Calise contacted us regarding an article on this Futuro she was researching. Always happy to "talk Futuro" (we doubt that would come as a surprise to anyone) a few days later we chatted for quite sometime about the Futuro, its history and about the Tampa Futuro(s) in particular.

The resulting article, titled "That spaceship on top of a Tampa strip club? It once was the house of the future" was published online 071519. During the course of her research Gabrielle was able to fill in some of the blanks in the history of this Futuro.

The "traditional" history for this Futuro suggests that a Tampa bar owner Pasquale "Pat" Matassini drove past a Futuro in Sebring in 1998, purchased it and placed it on top of the 2001 Odyssey club. That of course cannot be so as we pointed out to Gabrielle when we chatted; the first Futuro in the US did not appear at the Philadelphia International Airport until 1969.

So; what is the real story? In the Tampa Bay Time article Gabrielle recounts the actual history of this Futuro starting with information from Nick Matassini who indicated that in fact his father Pasquale, who died in 1999, had actually acquired the club with the Futuro already in place.

It turns out the Futuro was installed on top of the club by Futuro distributor Jerry DeLong, owner of Futuro Of Florida. Jerry was a mobile home salesman who started the company Futuro Of Florida in the early 1970's. He installed a Futuro (that he hauled from New Jersey on a flatbed himself) in Clearwater, Florida as a "display model". The Semmes Road Futuro (now demolished) was purchased from DeLong when Gwendolyn Zerby visited the display model and decided to make a purchase. Jerry eventually relocated the display model to the roof of the 2001 Odyssey club.

Bruce DeLong, Jerry's son, recounts that his father, who was obsessed with Stanley Kubrick's film 2001: A Space Odyssey, opened the 2001 Odyssey club in 1971 along with a group of partners in an old Tampa building that was formerly the Shangri La Lounge. They then relocated the Futuro that had been used as a display model in Clearwater to the roof of the club but not without issue. Bruce recalls that:

"It took two attempts to hoist the ship onto the roof ... When Sims Crane first lifted the saucer, gusts of wind caused the Futuro to smash into the side of the club. After repairs, they succeeded on a calmer day."

DeLong and his partners were later pressured into selling the club to Mafia boss Santo Trafficante Jr.. The mob connection continued in 1974 when the aforementioned Pasquale "Pat" Matassini, described by americanmafia.com as the "King Of The Tampa Strip Clubs" acquired the club and at some later date the club became the property of the current owners. 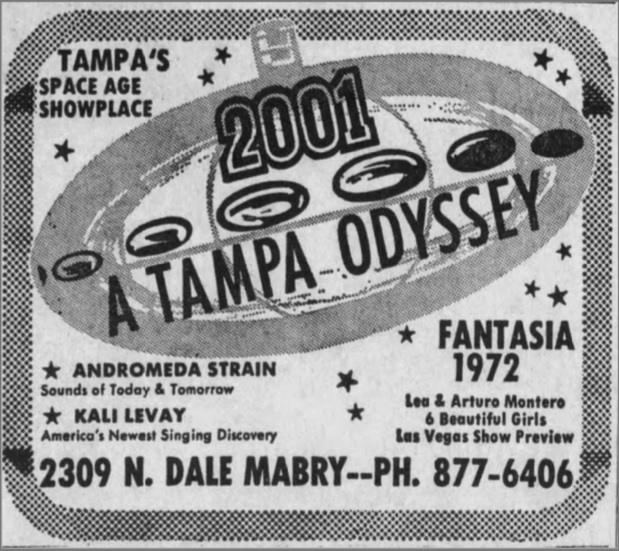 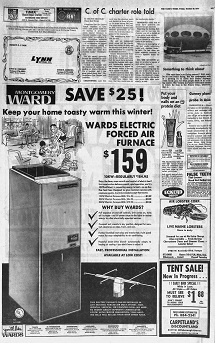 The 103070 issue of The Tampa Times carried a short article along with a photo of a fully assembled Futuro (described not as a Futuro but as a "contraption") sitting on a flat bed truck in a parking lot on N. Dale Mabry Hwy.

It is interesting to note that the article places the photo on N. Dale Mabry Hwy, the same as the current address for this Futuro.

One other interesting thing to note about the article is that it ends like this:

"The "return to Futuro" reference means to return the item to the Futuro Corp., wherever that is."

The reference is presumably to the wording that can be seen lower right in the photo. Though the photo resolution is not good and the wording is not clear it is hard to imagine what else the article could be referring to. 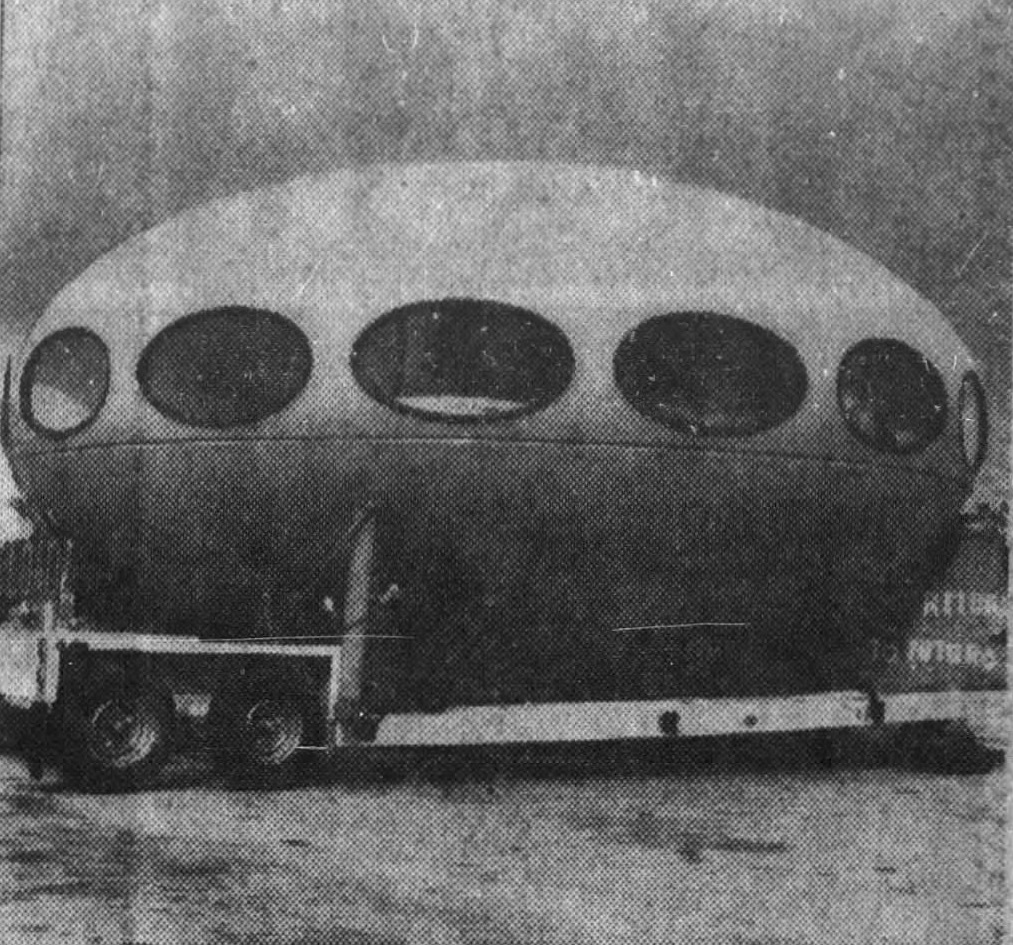 We have come across quite a few videos over the years that include footage of this Futuro but they have always also included some footage related to the adult nature of the busines that made them unsuitable for use on this site. Recently however Richard captured the footage below and kindly shared it with us. Certainly has some "active" lighting to go along with whatever happens "behind closed doors".

For the most part we am not much for gambling; sure we enjoy a trip to Las Vegas and might play the slots a little but that's about it. However, if we were big time gamblers we would wager a month's salary that the Futuro on N. Dale Mabry Hwy in Tampa, Florida is the only one in the world that gets a mention or two on WorldSexGuide.com. According to a forum post in a thread entitled "Tampa Strip Clubs" that referenced the club "2001 Nude Odyssey" we read:

"A recent New York Times story pointed out a growing network of fans of Futuro houses ..... Tampa has at least one. The club owner spotted it for sale in Sebring decades ago, paid something like $3,000 for it, and a kitschy local landmark was born. Tampa's (Futuro) has been retrofitted. Instead of a gangplank, wildly carpeted stairs lead to a round black-lighted room with a bar and a circle of tiny, private booths. And in this Futuro, the windows stay completely covered."

In a second improbable setting for comments about a Futuro Scott M. Deitche, in an article entitled "King Of The Tampa Strip Clubs" on AmericanMafia.com writes of gangster Pasquale "Pat" Matassini:

"Feeling that robbery was probably not a good career, Matassini went into law enforcement for a while, but left in the 1960's and started working around the strip clubs. In 1968, he bought a kitschy space ship and plopped it atop a bland building on Dale Mabry highway, and named the place 2001 Odyssey, no doubt after the popular Kubrick film."

What is interesting here is that while it is certainly possible both statements are true it is a little unlikely. If the Futuro was indeed purchased in 1968 it was purchased right at the very beginning of the Futuro's "limited" run and the likelihood that it was purchased, set up in Sebring, sold and then moved to its current location in 1968 is rather low. If the Futuro was located in Sebring and subsequently sold it seems more likely that sale was later than 1968.

The Futuro serves as something of a VIP lounge for the club. On the website "Creative Loafing Tampa" a somewhat tongue in cheek article "The Final Frontier" observes that:

" The ship is open to any customer interested in having a quiet (paid) conversation with one of the girls .... The ship's interior is kinda like the inside of the Gravitron, only each booth in the circular room has a privacy curtain, and in the middle, instead of some dude hollering and playing annoying music, there's a "bar" area where the tending mistress serves bottled water and juice. (It's a fully nude establishment, which means no alcohol.) Compared to downstairs' pounding, strip-danceable beats, flashing lights and big screen television, the spaceship lounge is subdued, with soft music and lots of privacy. And no, you can't see out the round "windows."

and in a 020910 note on RoadsideAmerica.com Rj observes:

"The spaceship is a VIP area and is not by any means free. The charge to enter is timed and starts at 15 min for over a hundred dollars. Of course that's with the company of an entertainer."

On the 2001 Nude Odyssey Website Press Page there are four videos that show off the Futuro to a greater or lesser degree. The videos are SFW but the page hosting them may not be.

At the time of writing the 2012 GOP convention is imminent and according to an 072612 (the latest confirmed date for this Futuro) New York Times Article by Lizette Alvarez strip clubs in Tampa including 2001 Nude Odyssey are gearing up for a rush of business; shouldn't they all be talking politics and figuring out how to make the voter's life better? Guess not though perhaps the politicians are not the worst. In the NY Times article Alvarez quotes the following from the 2001 Nude Odyssey owner:

"Don Kleinhans, the owner of the 2001 Odyssey, said when the Promise Keepers, a male evangelical group, came to town years ago, business was rollicking."

The NY Times article also contributes another first to the Tampa Futuro; it has managed a mention on WorldSexGuide.com, it got itself noticed by AmericanMafia.com and here, courtesy of the NY Times it receives the most unlikely description we have ever seen for a Futuro:

"The spaceship, a much-talked about private V.I.P. room perched atop the 2001 Odyssey like a wedding-cake embellishment, has also helped burnish Tampa's louche label. It is white, oval, with round windows, a rare prefabricated Futuro house designed by the Finnish architect Matti Suuronen in the 1960s and 1970s. "It was named one of the seven wonders of Tampa Bay," said the Odyssey's manager, Todd Trause. The provenance of that distinction is hard to decipher."

So, all in all not your typical Futuro!

The photos below are by ferret111 and displayed here under CC 2.0 license. 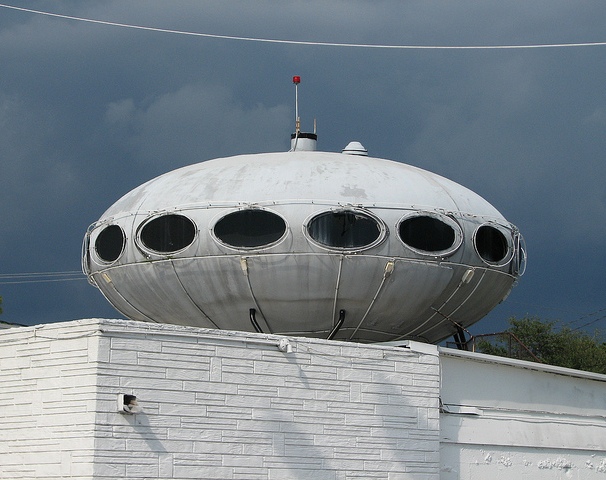 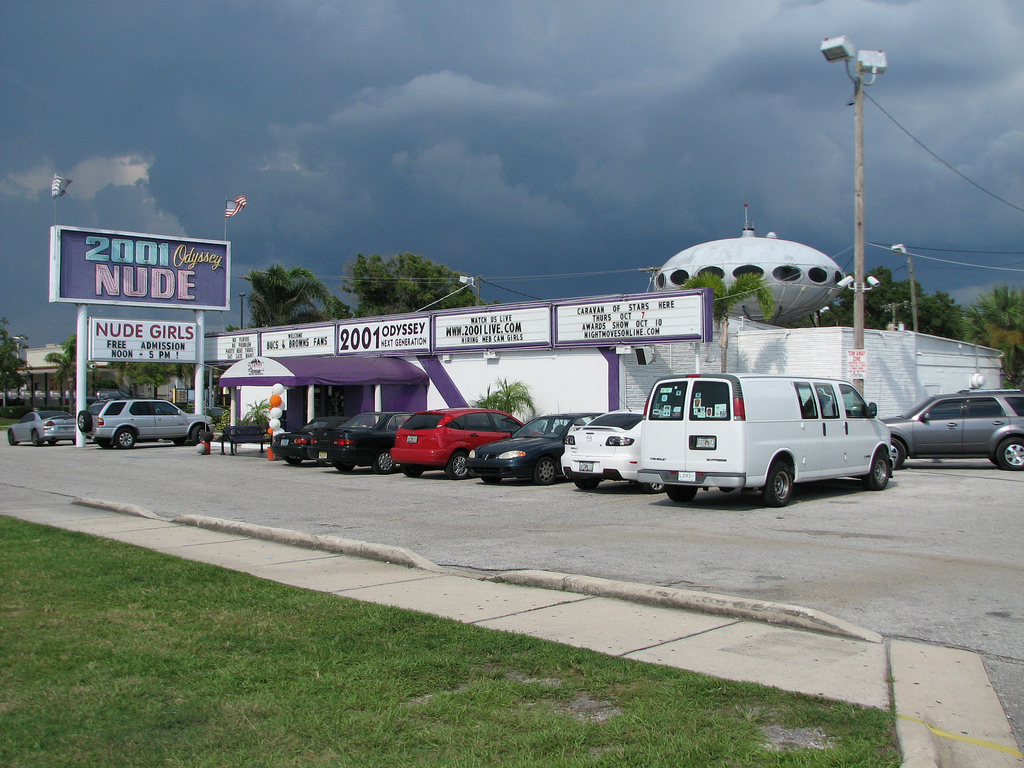 This photograph by cashmoneychris69 taken 121322.