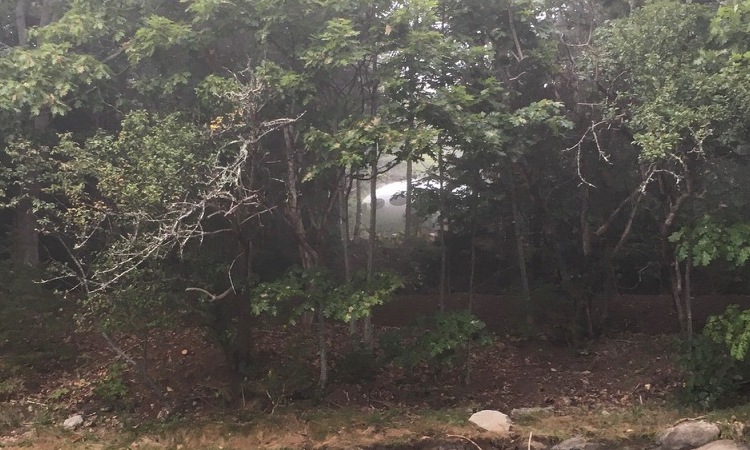 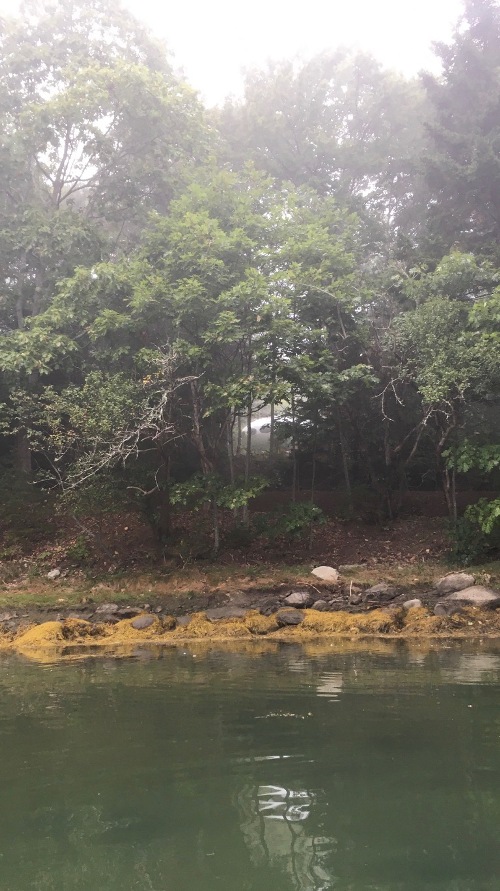 We also recently came across some nice video footage shot shortly before the Futuro left Wisconsin. The videos were posted to Instagram 090520 by hamlinavenue. The original posting can be found on Instagram here.

Previous owner Drew recently sent us these photos from back on 080617 when his Futuro was disassembled and began its move to Maine. What is that old saying? "Better late than never". That sentiment definitely applies here; great photos - thanks for sending them over Drew.

In his email Drew also added the interesting fact that the interior fixtures and fittings were discarded and did not travel with the shell.

We have never heard exactly where the Futuro ended up, just "somewhere in Maine". The comments on the interior now make us even more interested in tracking it down; we are very curious about what the plan was for the interior. If anyone out there happens to have any information we would love to hear from you; we can be contacted via this websites Contact Form or directly by email. 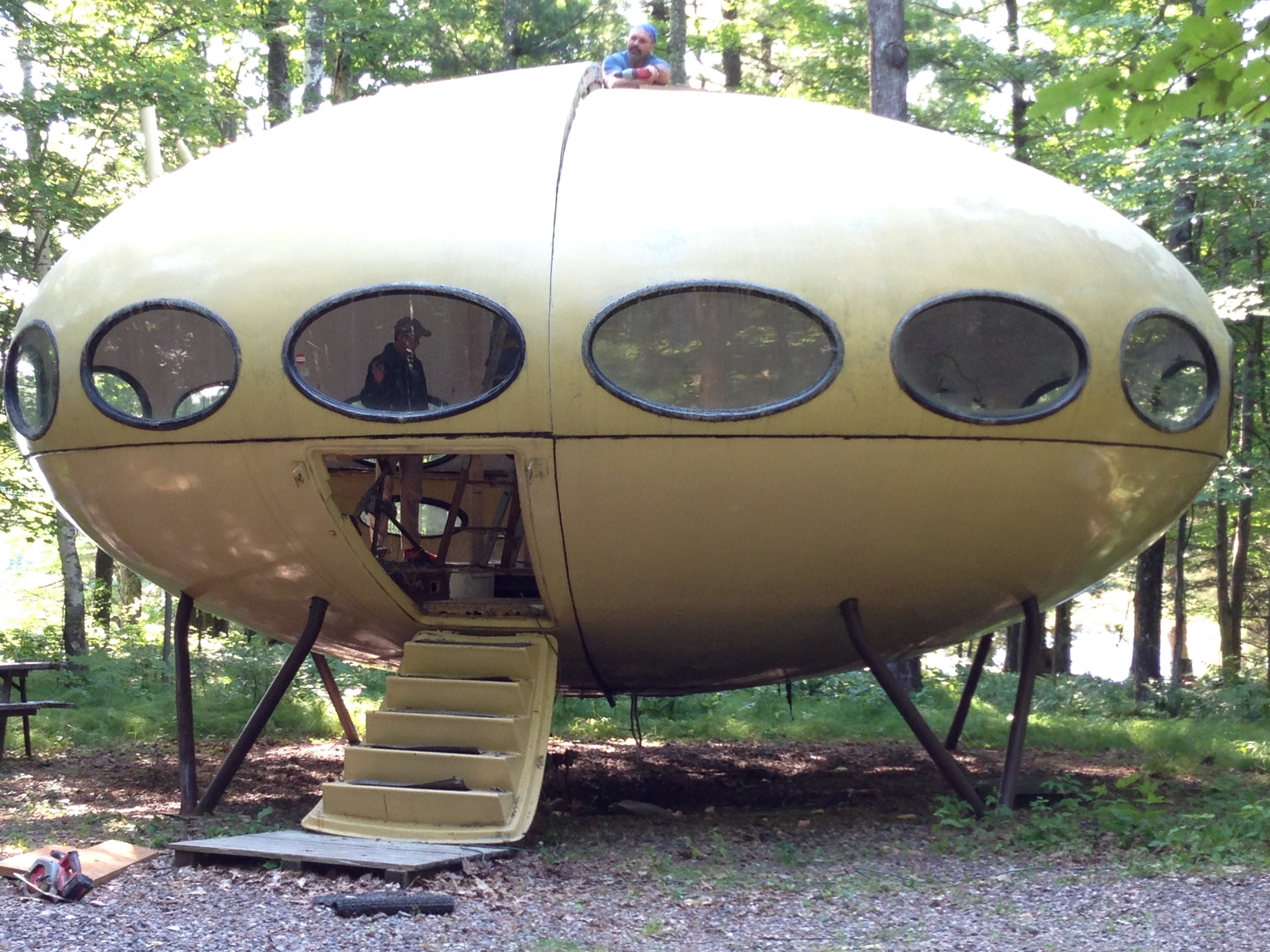 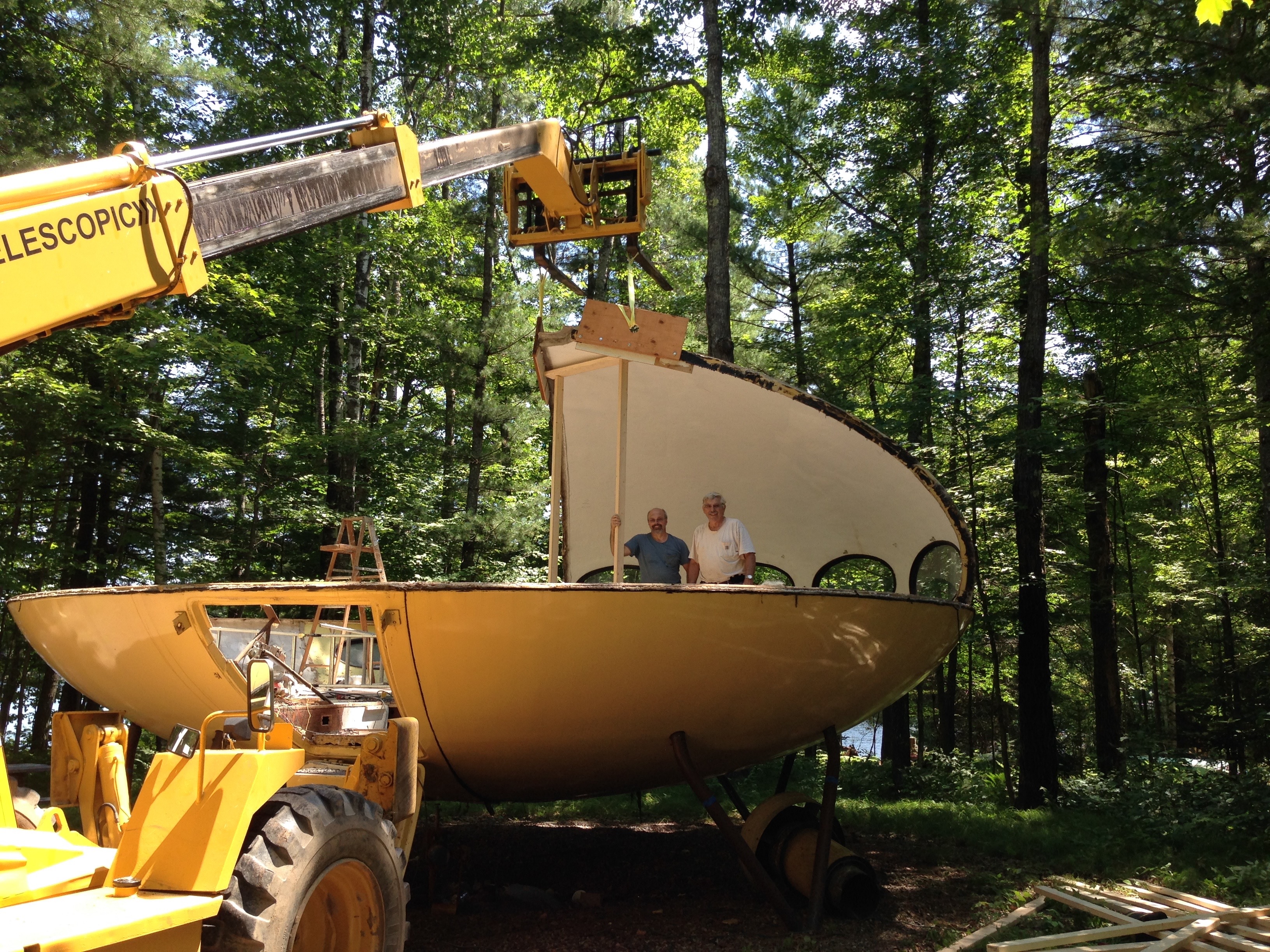 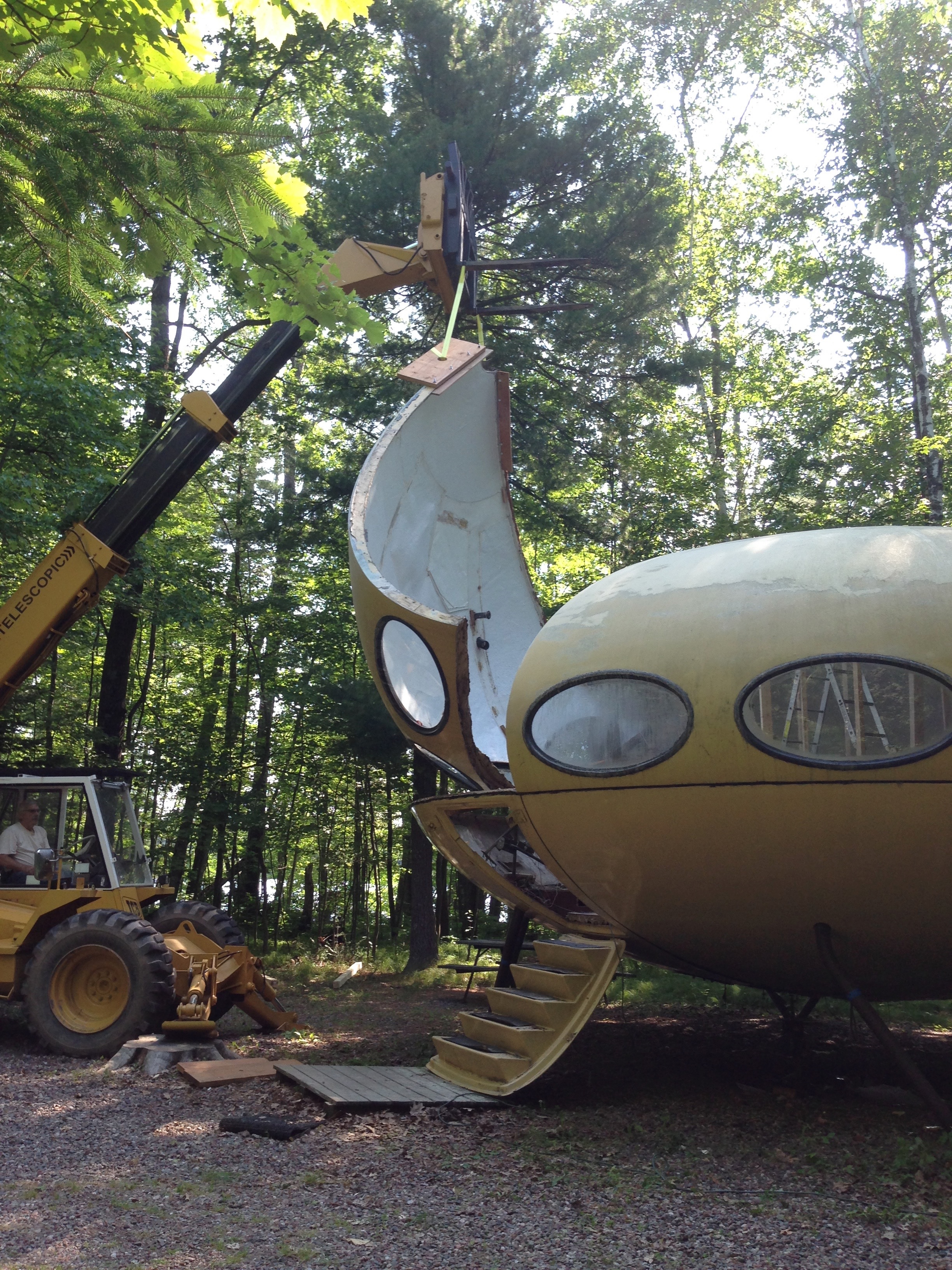 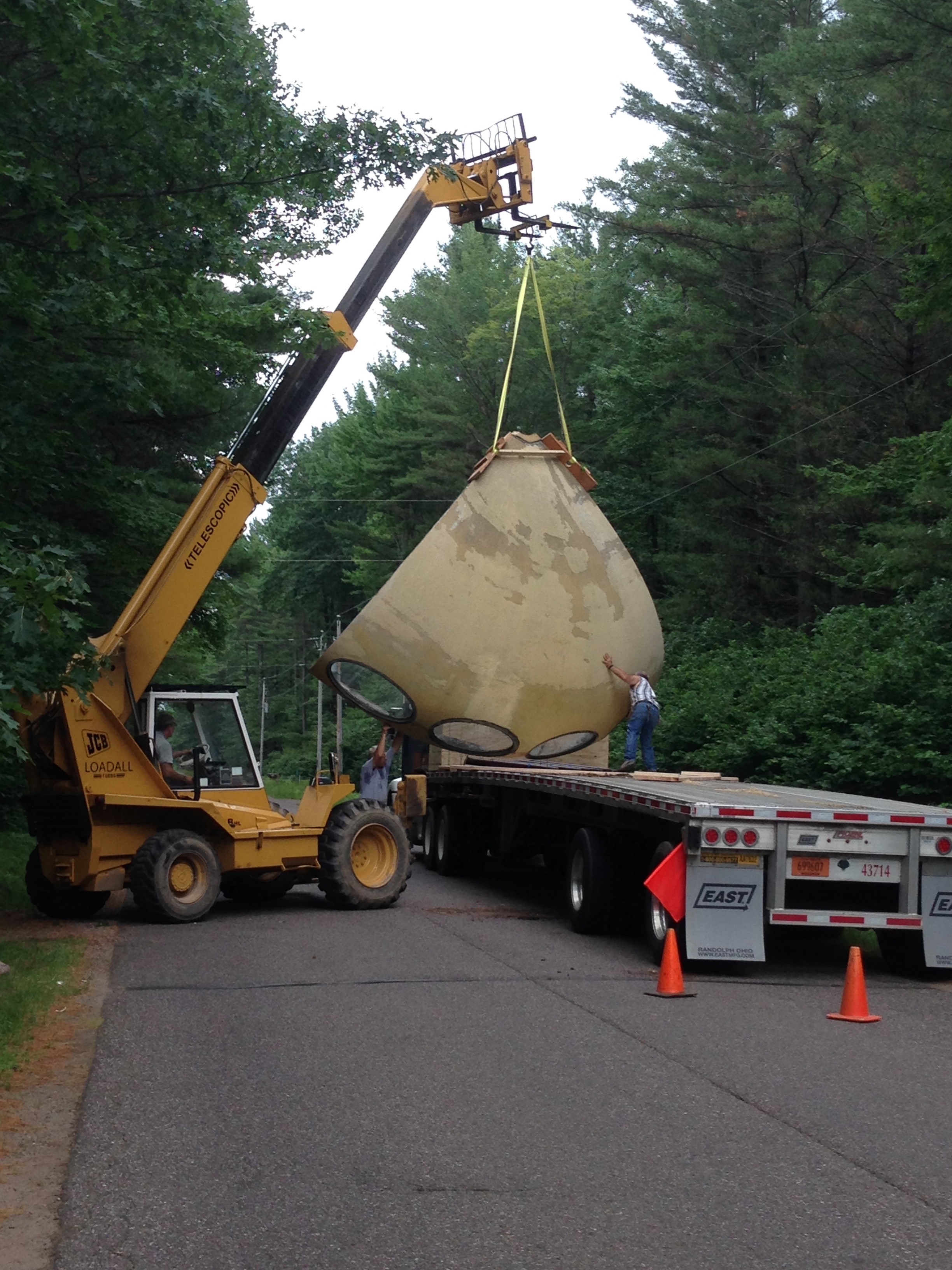 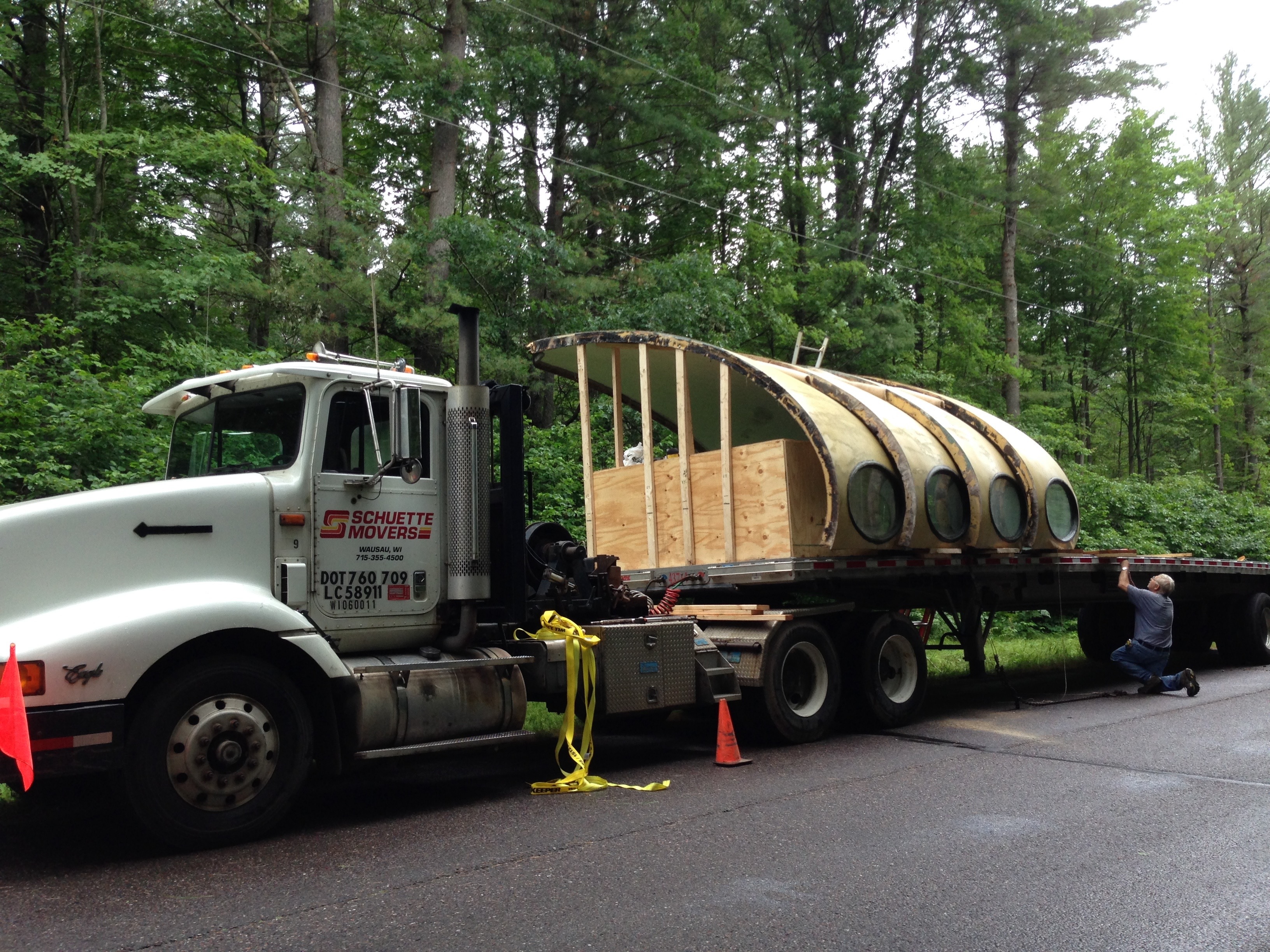 We had not come across any updates regarding this Futuro post its sale at the end of 2016 until recently when we received an email from David Dalena. David, who is from from Boothbay Harbor, Maine wrote in part:

"Yesterday I was standing near the road (Lakeside Drive) chatting with my neighbor, when a huge truck carrying a rounded wedge of fiberglass with oval windows went by. She said, huh - weird boat (we see a lot of boats go by every day). But this was different, and I recognized that it might be one of those futuristic fiberglass houses from the mid-20th century. Another truck passed by with another piece this morning, so I googled "fiberglass spaceship house" and found your site. I was scrolling through the photos with another neighbor this afternoon, and I said "it looked just like that one" when I saw the photo of Pod Up North. Almost fell over when I saw your update that it had been sold and was being relocated to Maine."

We are not aware of any other US Futuros that are currently "on the move" and, given that previous information was this Futuro was being relocated to Maine, it seems highly likely that this was a sighting of "The Pod Up North" on the way to its new home.

Owner, or more accurately ex-owner, Drew let us know recently that his Futuro had been sold. The new owner plans to move the Futuro to a new location in Maine in the spring.

Right around the same time as we heard from Drew Nicholas Lodge sent us these great photos showing the Futuro ready for winter and wearing a "snow cap". The photos were taken 112616. Thanks for sharing them Nicholas. 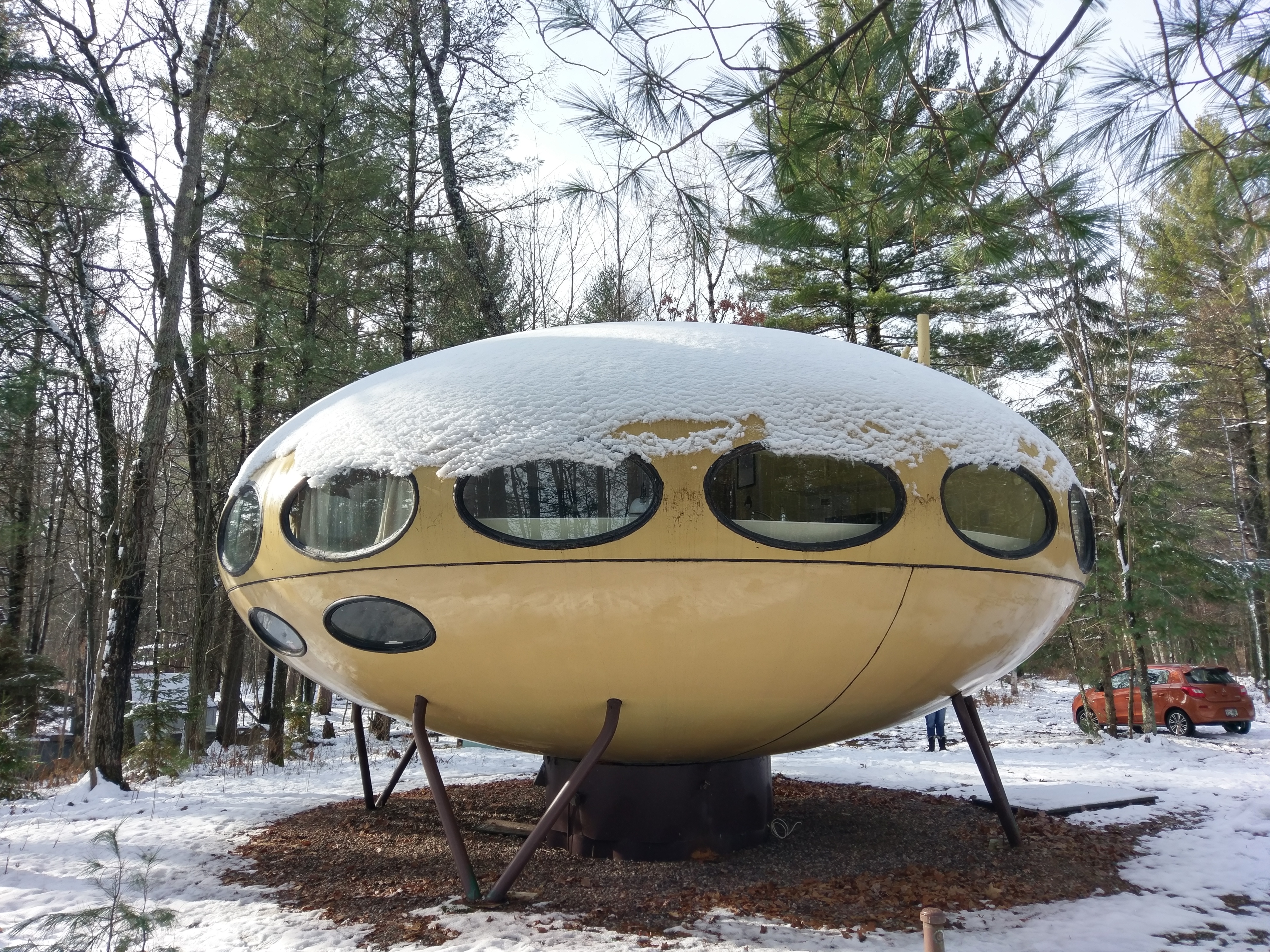 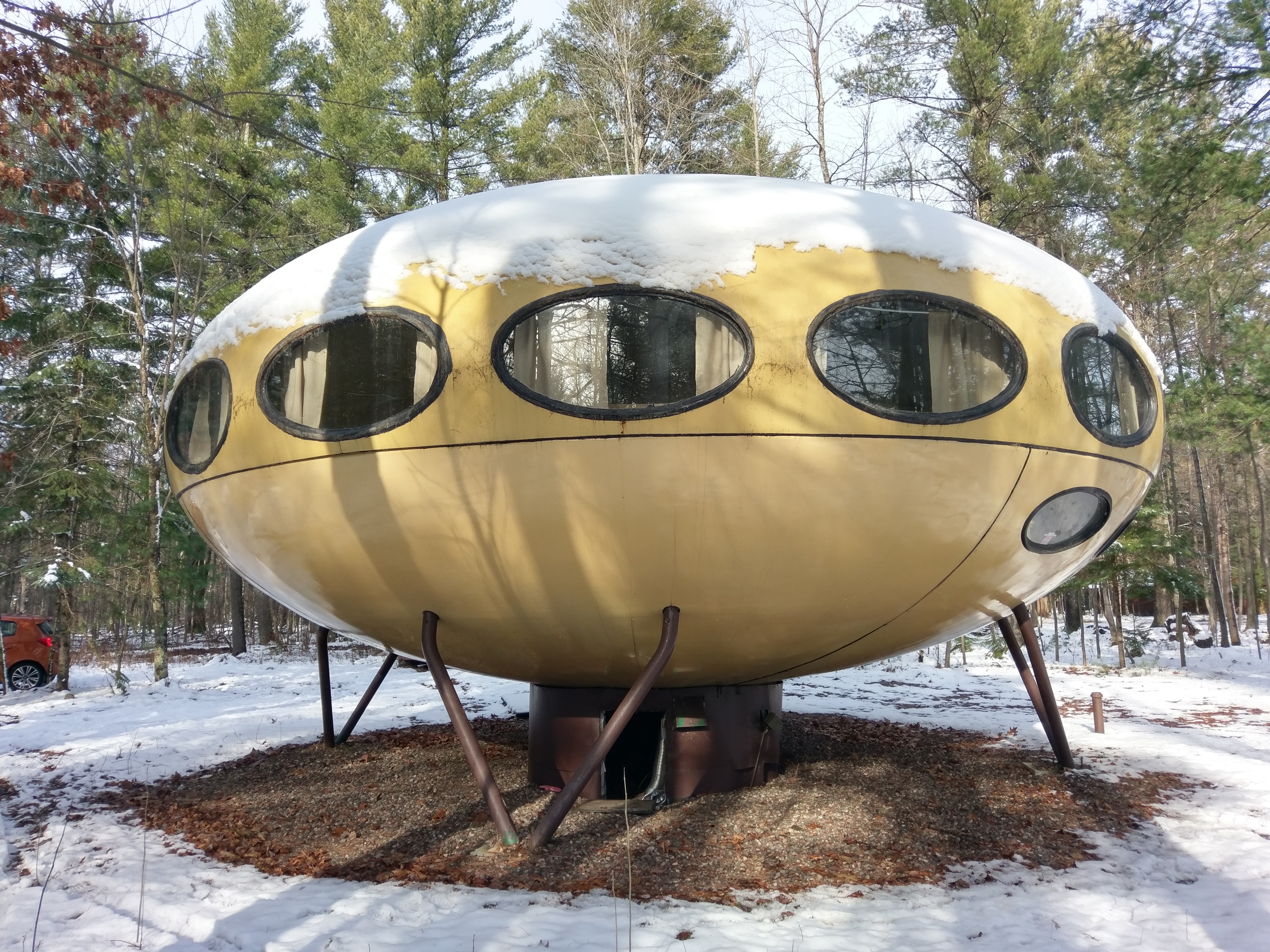 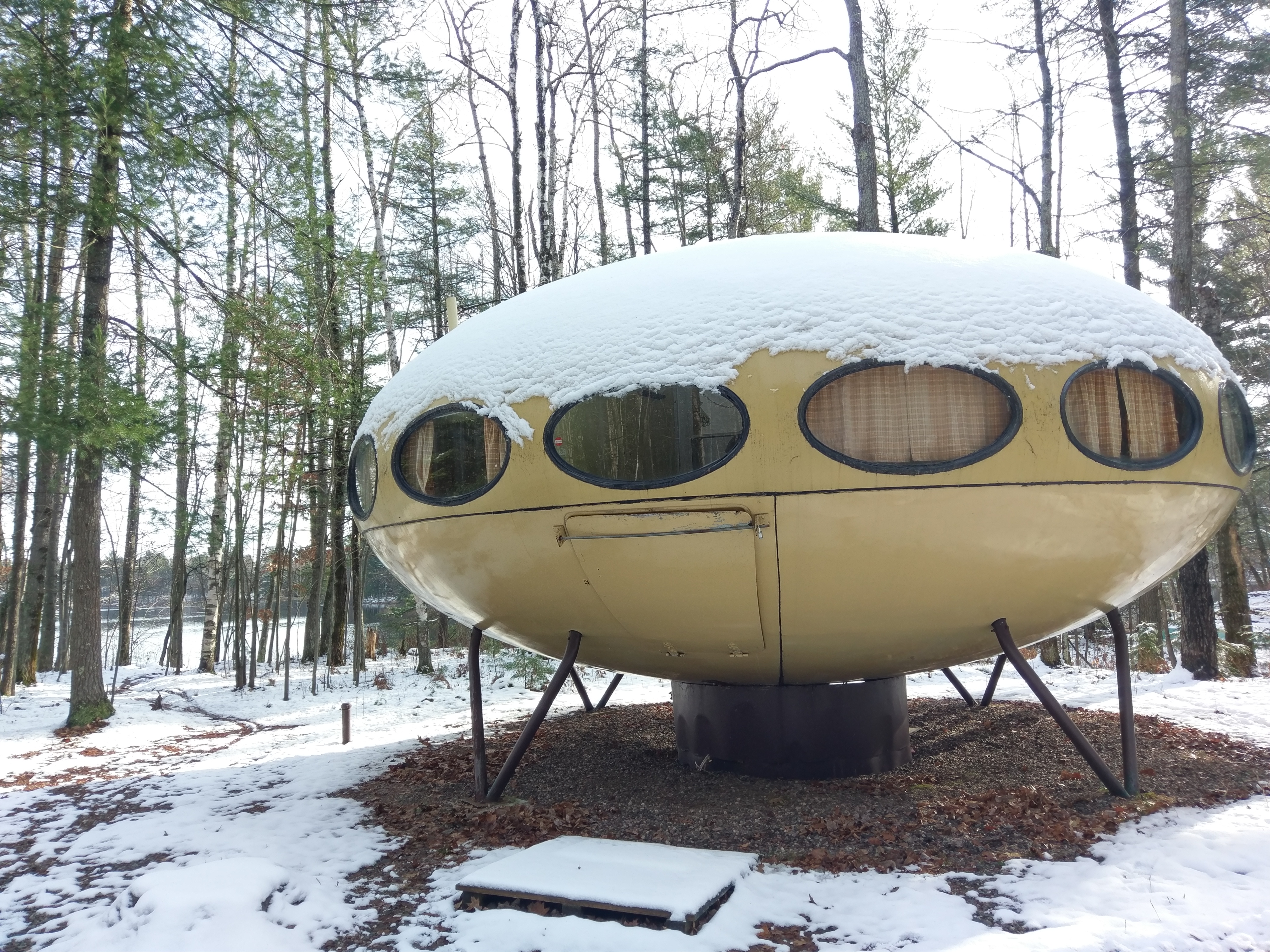 Rob O'Hara recently took the opportunity to experience life in a Futuro when he and his family took a vacation in Wisconsin and stayed in the "Pod Up North". Rob took a great set of photos and some of these can be found below (our thanks to Rob for allowing us to display them here); the full set can be found in Rob's Gallery.

There are many interior variations to be found in Futuros both in the US and elsewhere but Rob informs us that the "Pod Up North" seems to be little changed from the "standard" US design. The interior appeared to match almost exactly the "standard" interior found on this floorplan even down to the shape and size of the dining table.

We have expressed doubts elsewhere in these pages as to the reasonableness or otherwise of statements made back in the Futuro's "heyday" that it could comfortably accommodate eight people (which were presumably based on the original Finnish design which featured individual bed/chair units rather than the "couch" set up seen in this and other US Futuros).

Rob actually took a tape measure to the question and he tells us that rearranging the couch cushions created two 6' by 3' "beds" for his children; the remaining cushions could have created a further 9' by 3' "bed" which was more than enough for one person but obviously not sufficient for two. With two sleeping in the full size bed in the bedroom this meant that the Futuro could comfortably sleep five. Anyone additional to those five would likely be left sleeping on the floor. 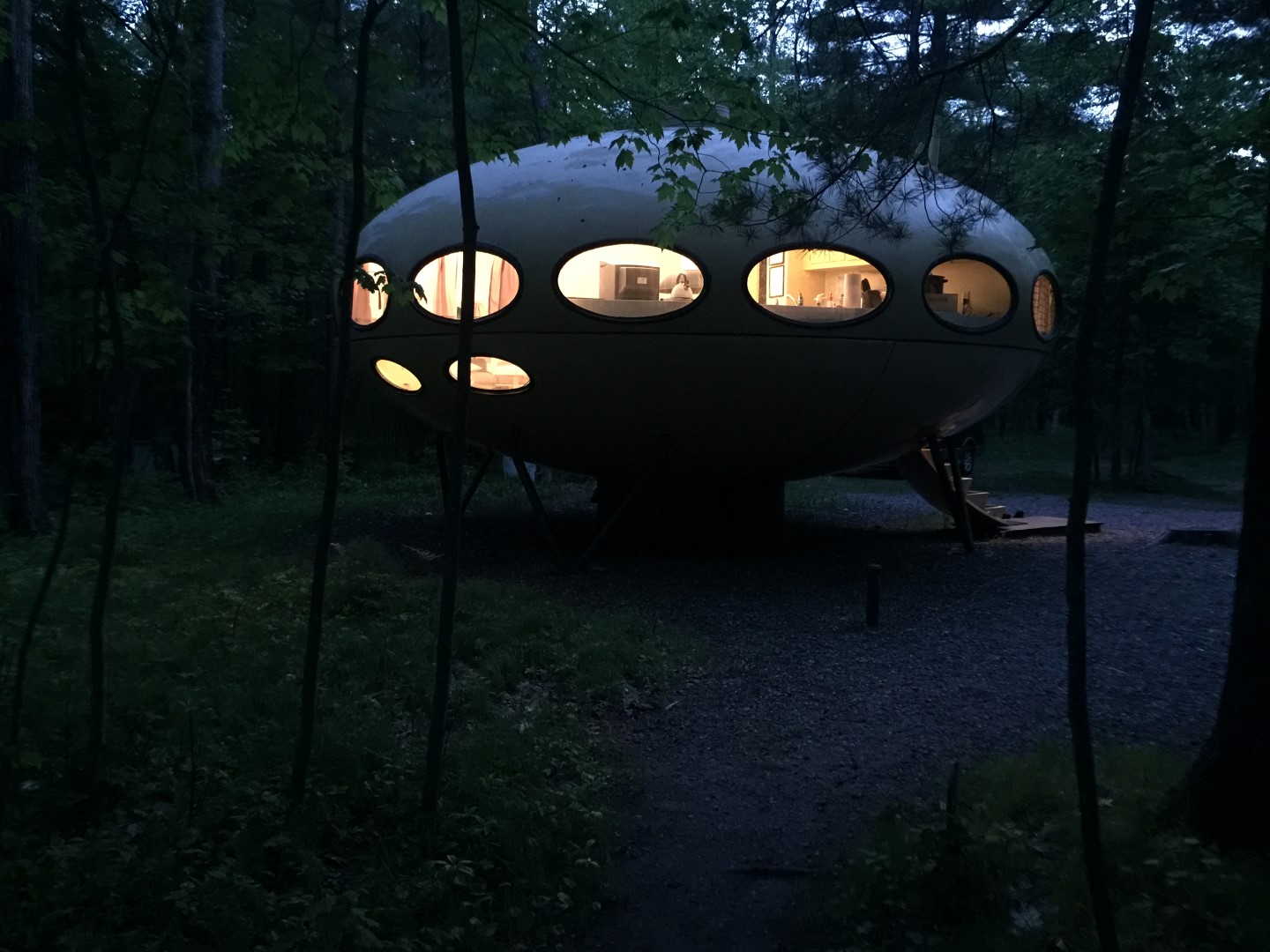 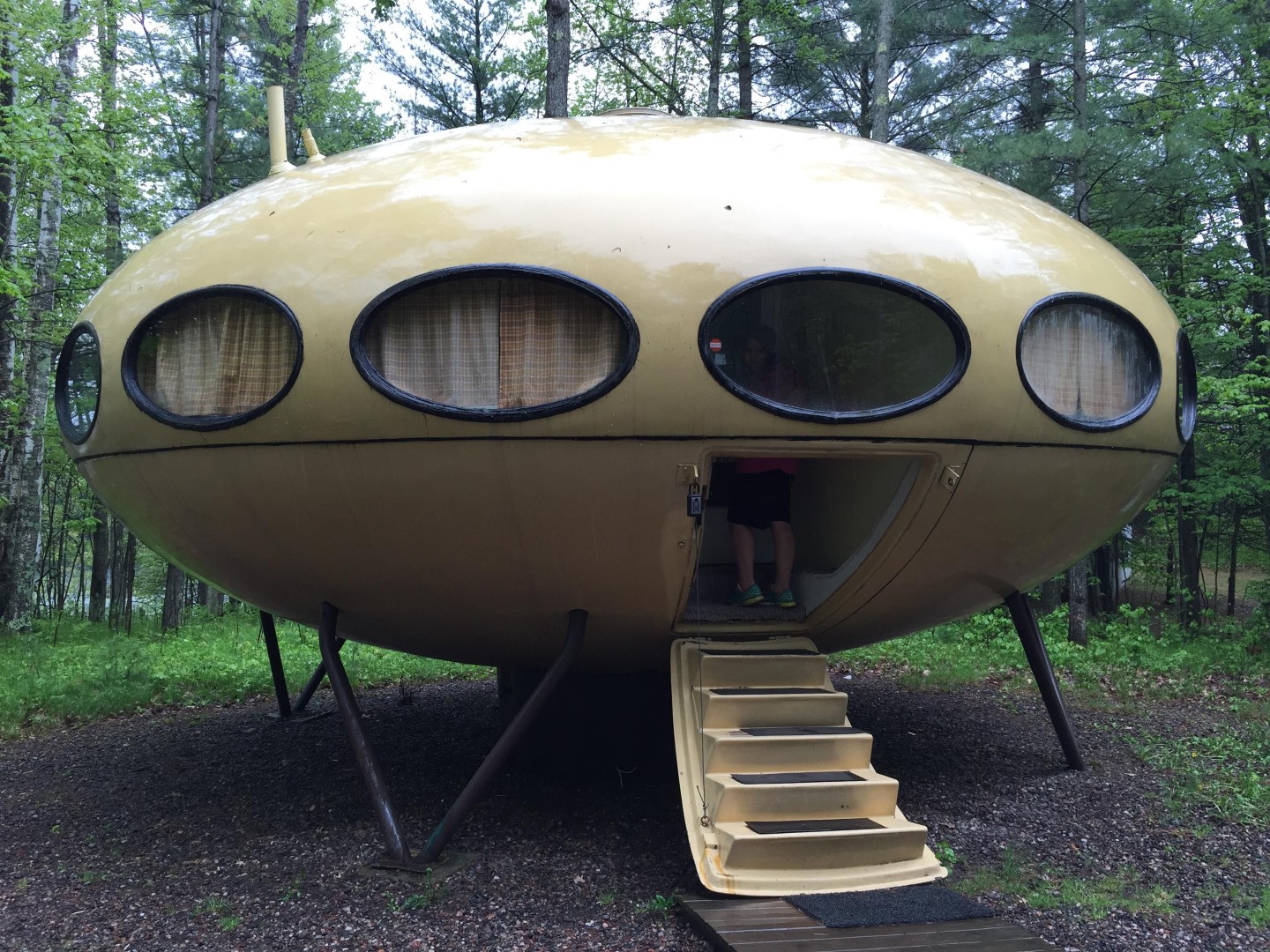 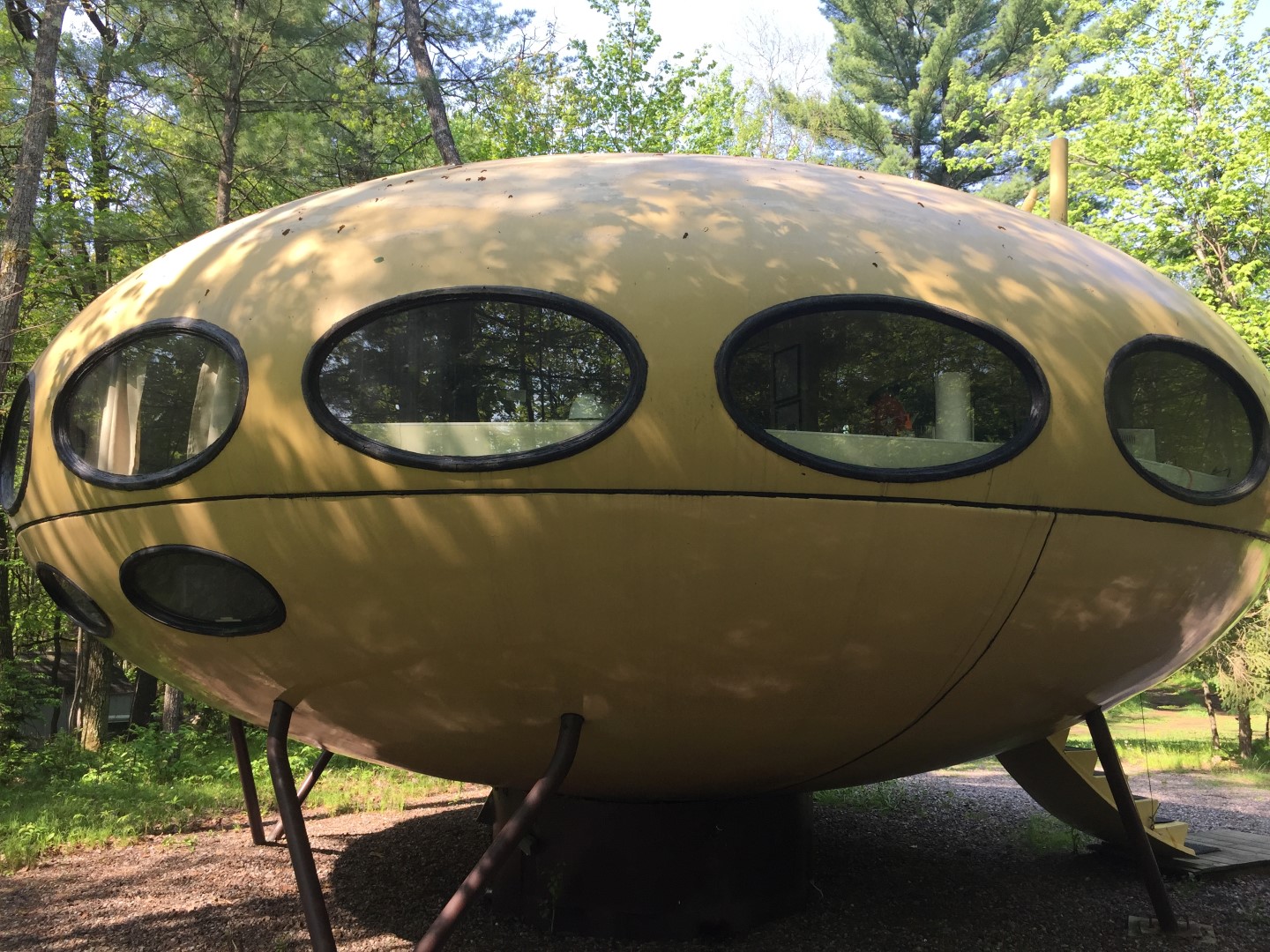 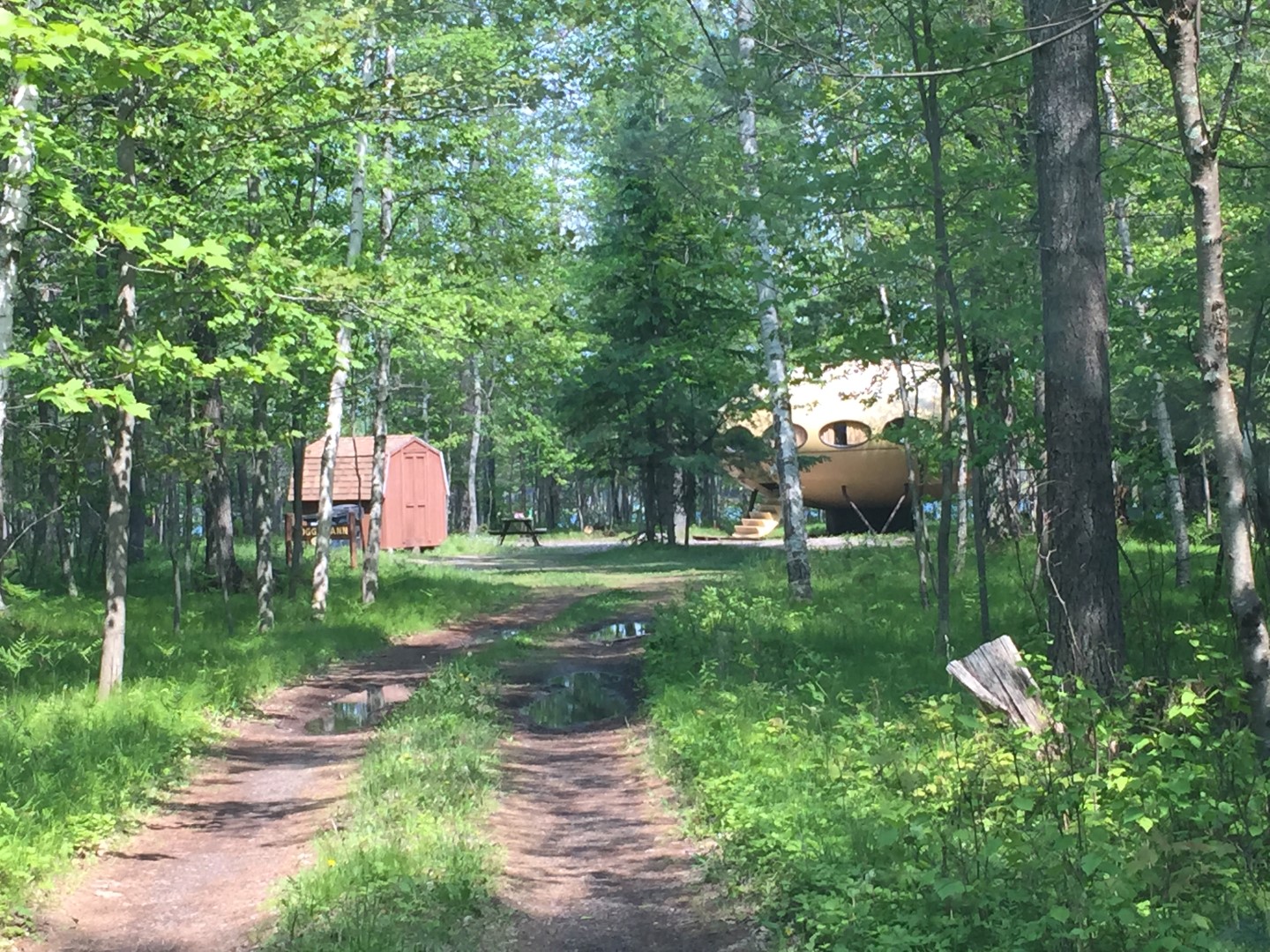 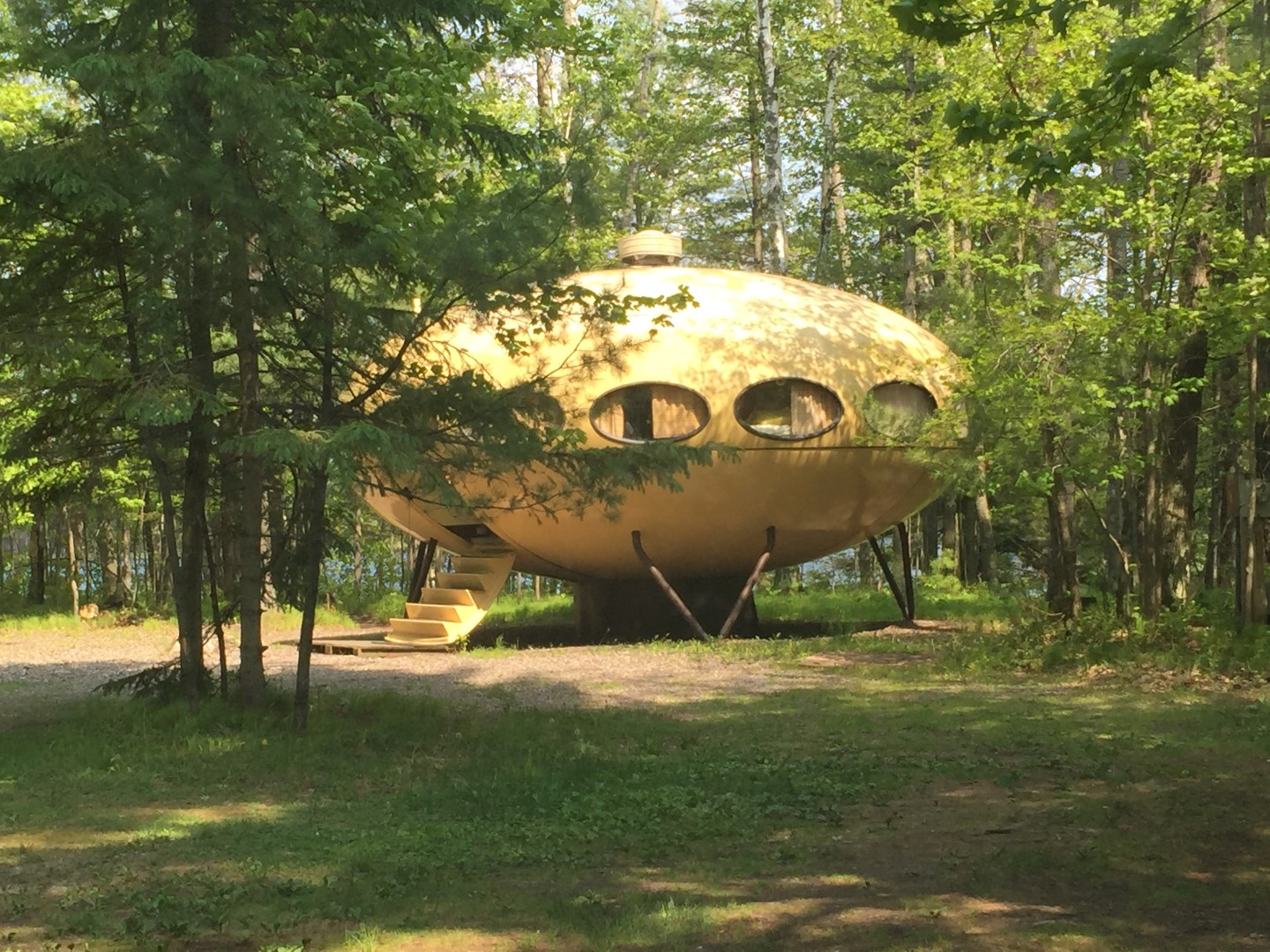 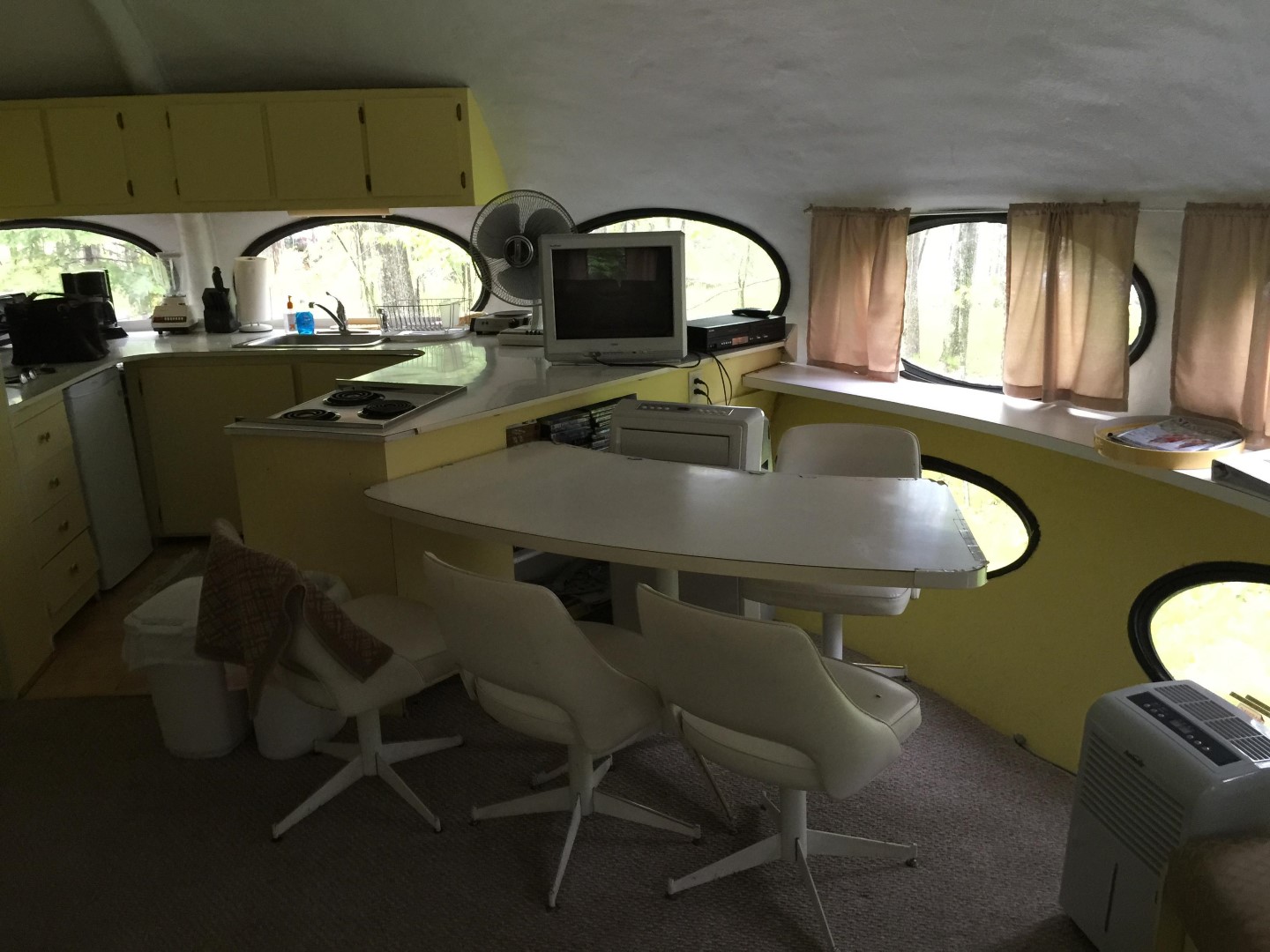 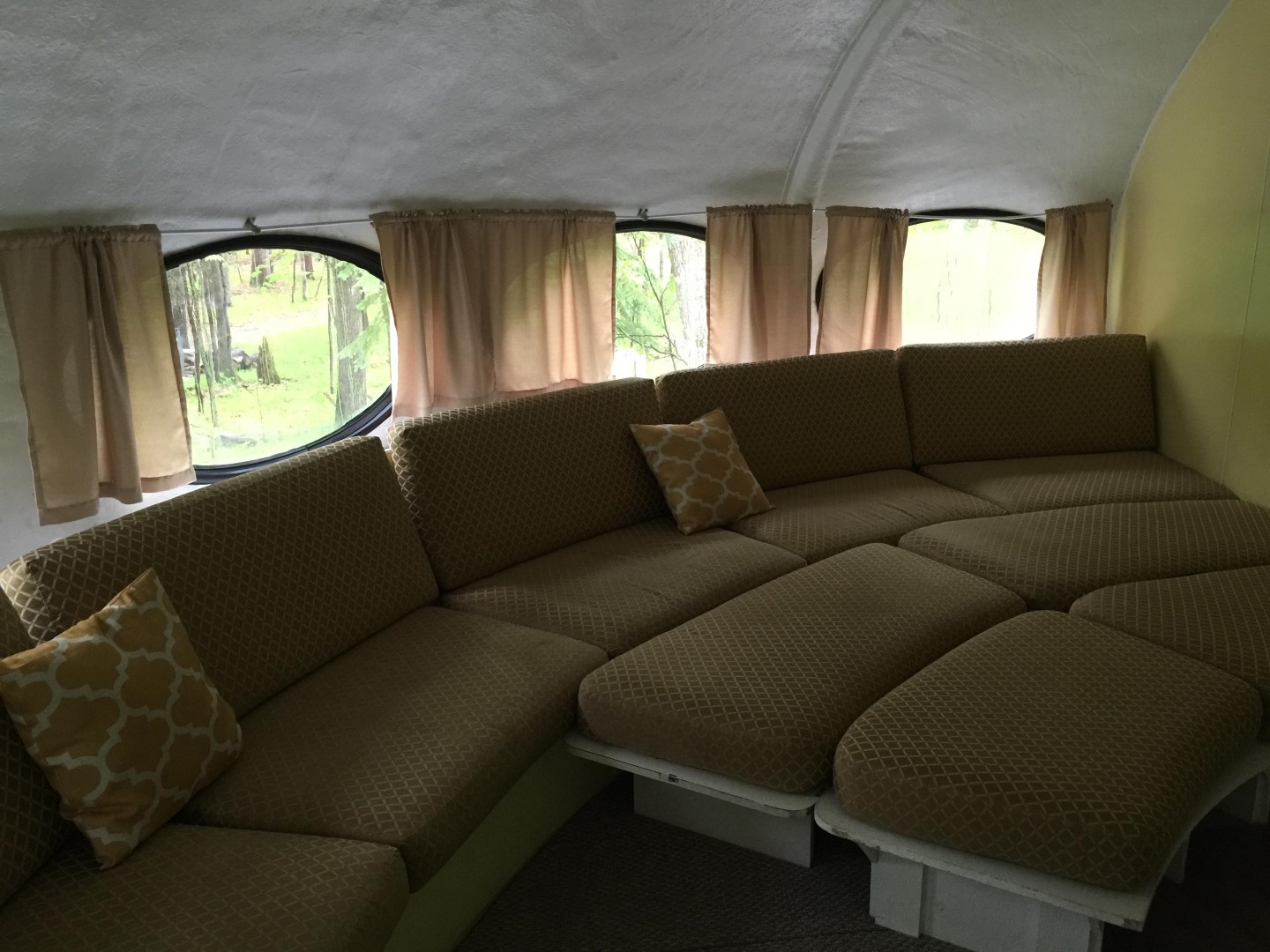 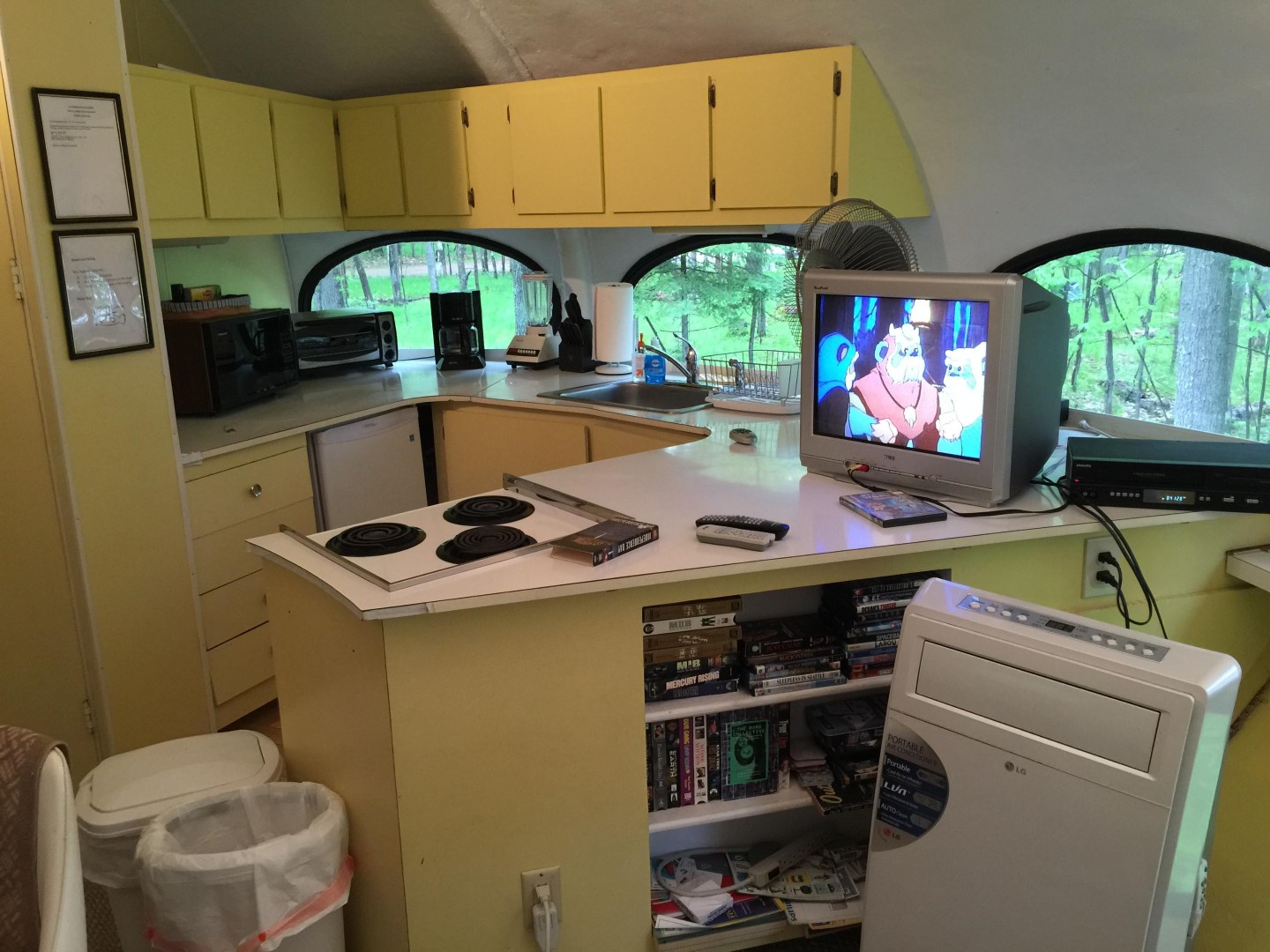 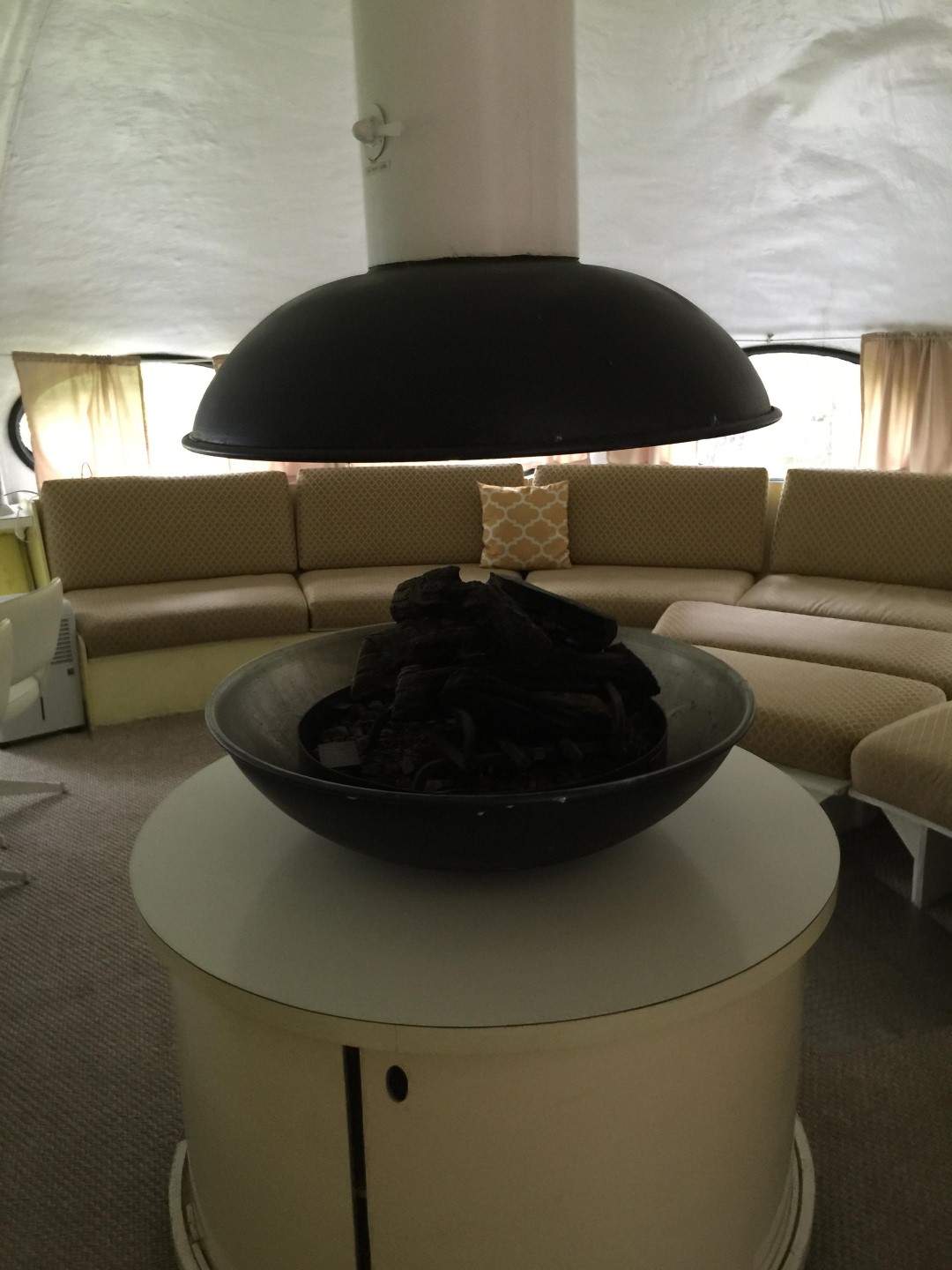 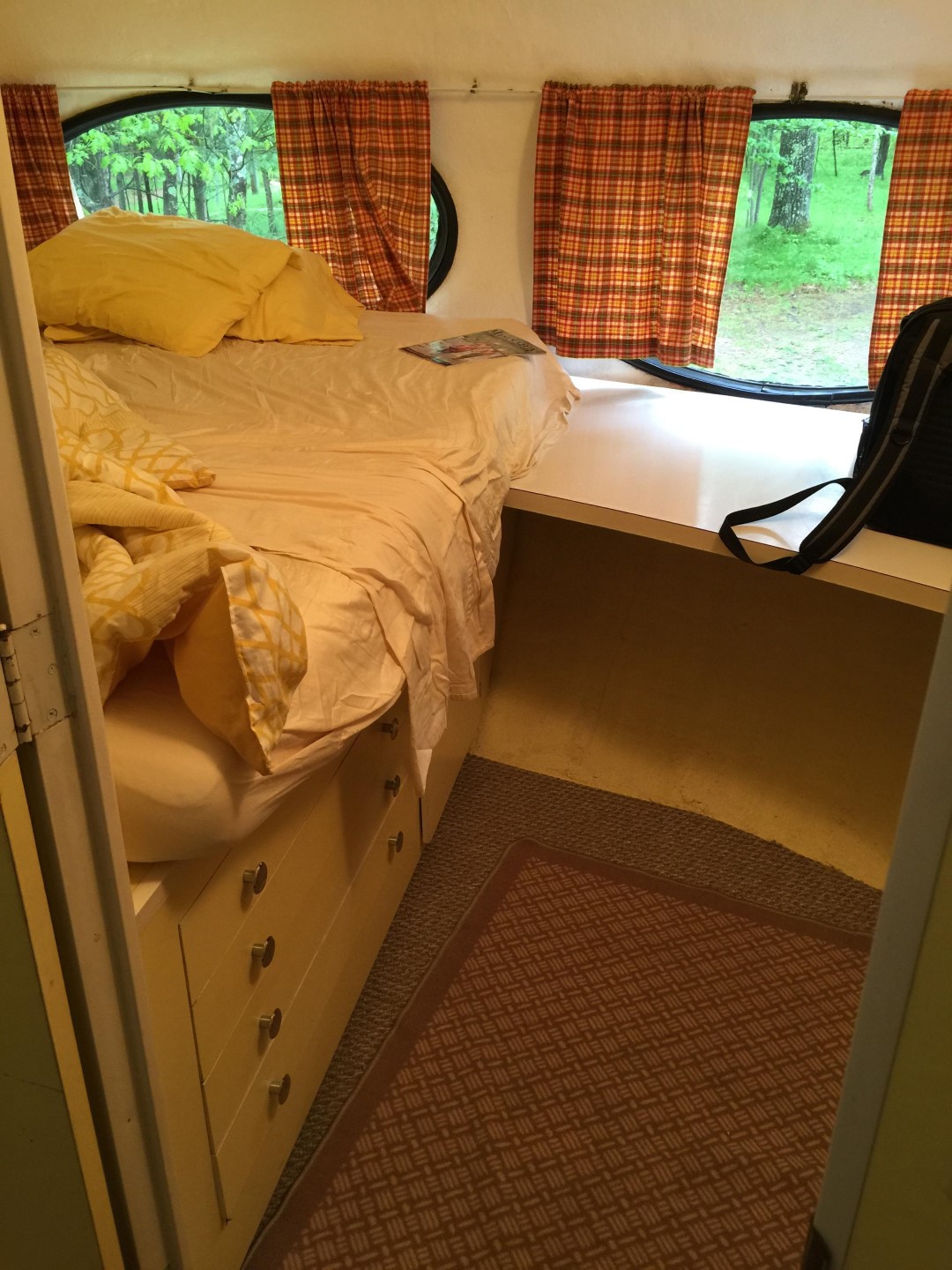 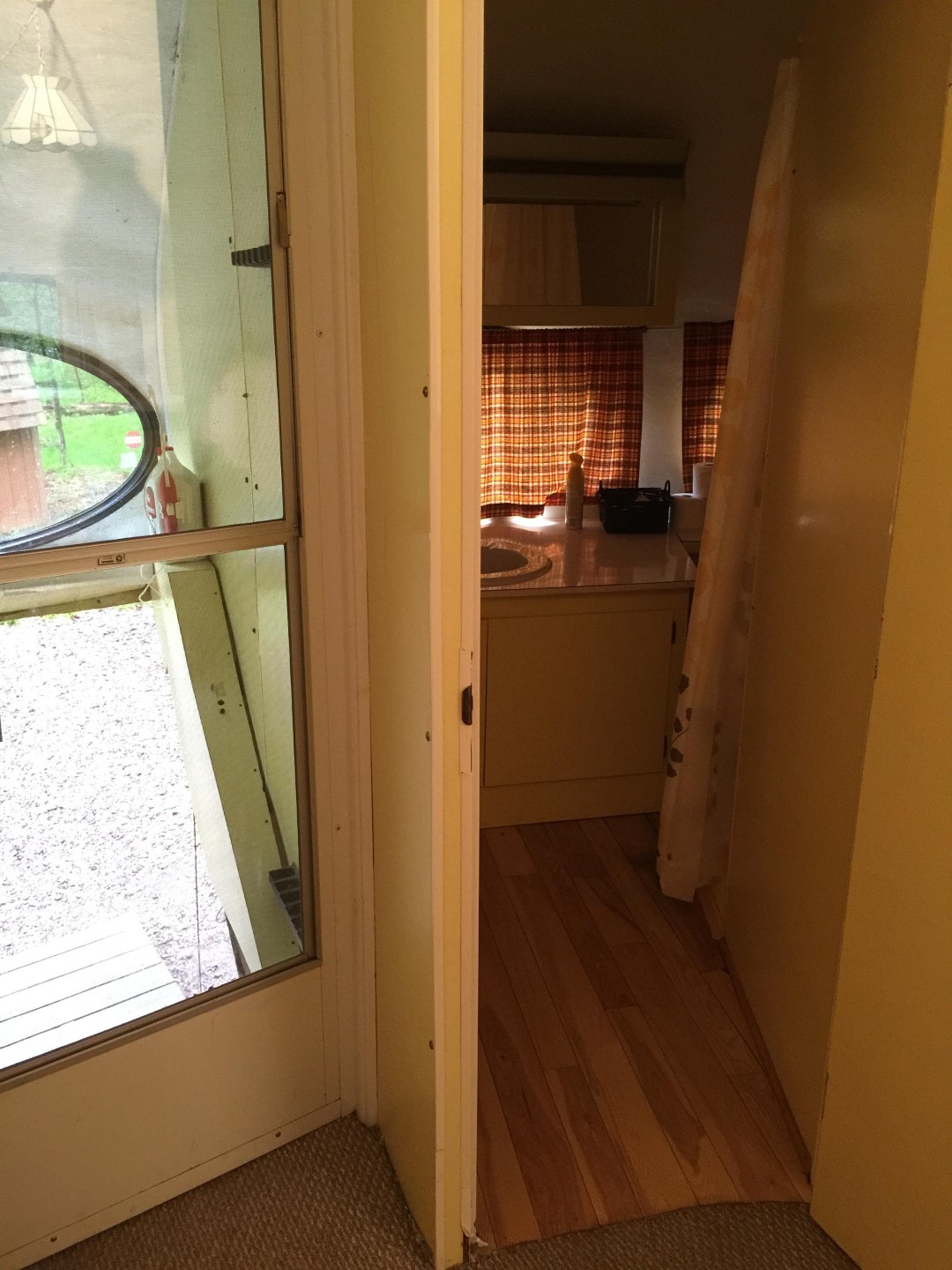 The "Pod Up North" just got herself a little facelift. Drew was kind enough to send us the photos below which provide a "before and after" look at the Futuro either side of a good cleaning the unit just received. As Drew put it "What a difference a little cleaning can make ..." Thanks for sending the photos Drew. 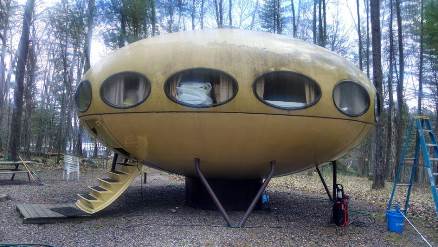 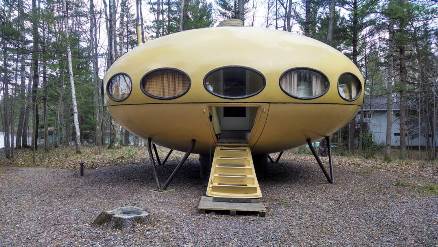 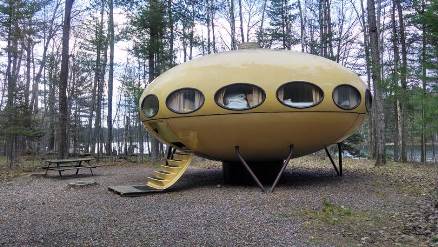 Though we were reasonably certain we had the location of this Futuro "down" the imagery previously available in Google Maps was not good and we could not be 100% sure. Thanks to updated Google Maps satellite imagery dated 050913 we are now sure; this latest satellite imagery shows the Futuro clearly.

If you are anything like us and have an interest in (or maybe even an obsession with) the Futuro House owning one would be just amazing but frankly beyond the means of most of us. What might be the next best thing? How about renting one for a vacation?

Drew Poggeman can offer you just that opportunity with the PodUpNorth. Located with private access to Lake Sumach, Wisconsin the PodUpNorth provides an opportunity to take a vacation in your own private "UFO" and experience the picturesque landscape of Northern Wisconsin at the same time.

As the interior images show Drew has obviously put a lot of love into the restoration of this Futuro and it now features a bedroom, bathroom, kitchen, living room and a TV/DVD combo with, yes you guessed it, a collection of sci-fi movies. A word to the wise though; the Futuro was designed and publicized as offering accommodations for 8 adults. As we have observed elsewhere on more than one occasion we honestly cannot imagine that. We have never been in a restored, habitable Futuro but we have been in a derelict one and so have some perception of its size; for 8 it is not. Our view, don't look here for more than the nuclear - 2 plus 2 - family or perhaps best we bet this would be a wonderful place for that romantic gettaway for two you have been planning for years and just never got around to.

For full details, lots more images and a whole lot more information check out the PodUpNorth website. It appears to enjoy a pretty good occupancy rate for the May through October season with rates around the $500 a week mark(2011) so if you are interested you might think of booking early (current availability is on this page). Full contact information for Drew is available on the PodUpNorth website. 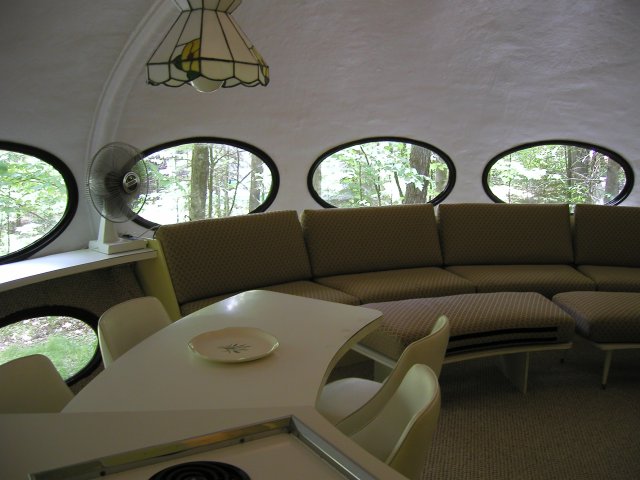 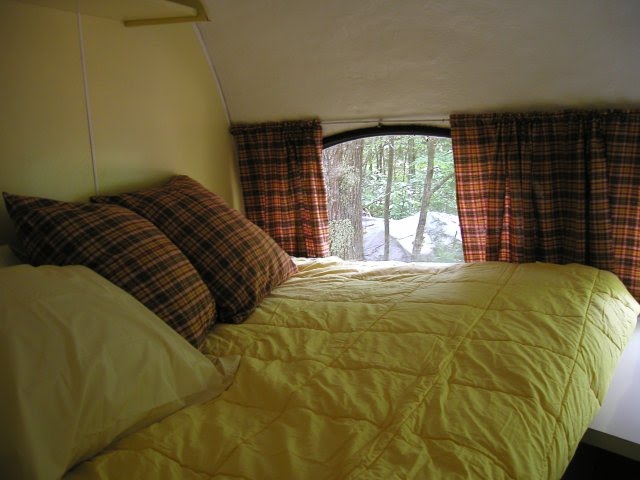 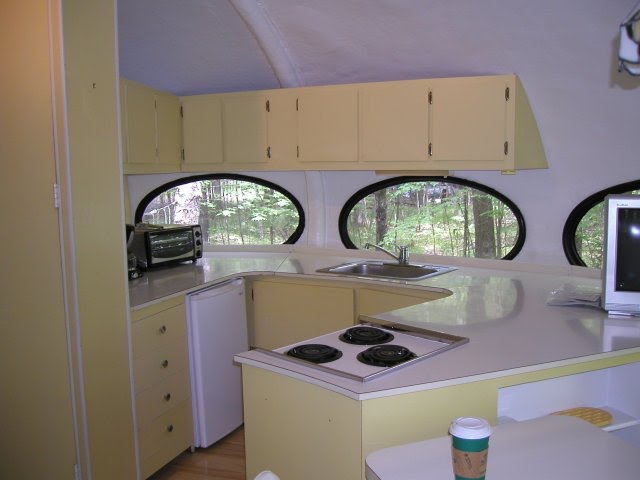