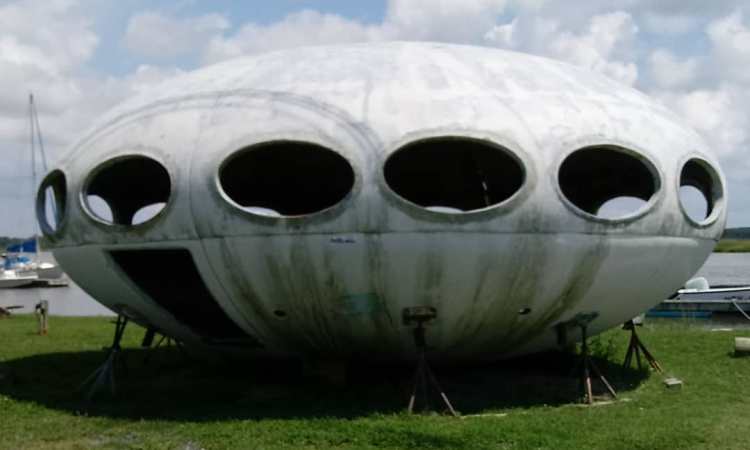 and it lists among its various programs the following:

"publishes the annual 10 Most Endangered Historic Places in NJ list, which draws attention to remarkable sites and to their many challenges. We believe that listing them will be a catalyst for change and that positive solutions can be found for their preservation."

The criteria for inclusion in the 10 Most Endangered Historic Places in NJ list are listed as being: It is always great to see a Futuro recognized for its architectural significance and for the need to preserve it and so we were happy to see that the 2020 list included both this Futuro and the other New Jersey Futuro in Willingboro.

There are several photos of this Futuro during its time on Morey's Pier scattered across this website (among them several photos in the Seaside Heights article on the "Lost Souls" page and several items in our collection of "Things Futuro".

Several more surfaced recently when luketheidiotdunce sent us a link to a website we had not come across before, fredmahana.com. Several of the photos were very similar to the ones already on the site but the four below were a little different and so we thought they would be an interesting addition here. Luke; thanks for the link. The photos are courtesy of fredmahana.com where the originals can be found along with additional photographs not featured here so be sure to check the site out. 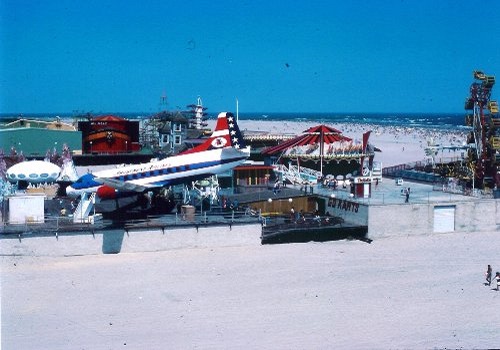 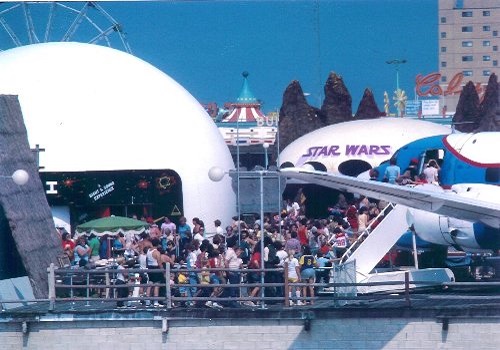 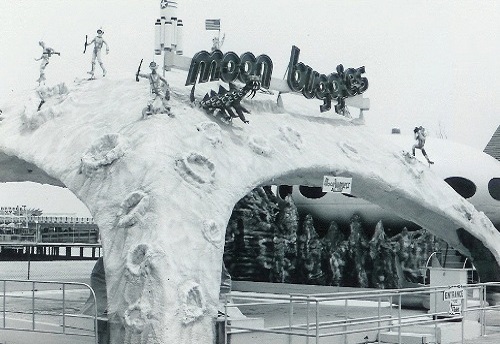 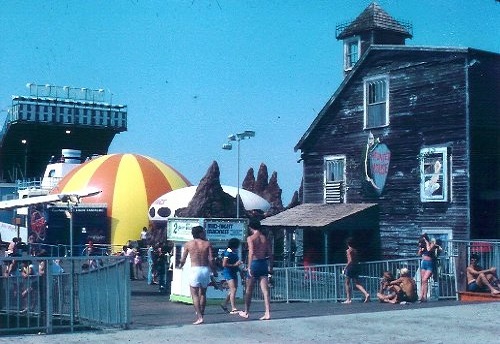 The video below was shot 092918 and posted to Youtube by SixBlindKids. It features some nice footage of this Futuro at the beginning. Our thanks to Joe (the dad) for sending us the link.

When we first saw this 12" by 8" 1978 photo we thought it showed this Futuro (or more accurately a small part of it) back in its days at Morey's Pier in Wildwood, NJ and when we checked it against other photos of Morey's Pier we were able to confirm that was the case so we added it to our collection of "Things Futuro".

The actual printed photo is cropped from the original source which can be seen in the second photo; in that photo at the far right a small part of a yellow and red structure can be seen which can also be seen next to the Futuro in the last photo, an aerial shot of Morey's Pier from "back in the day". 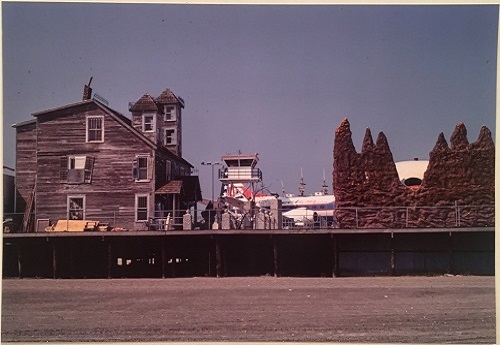 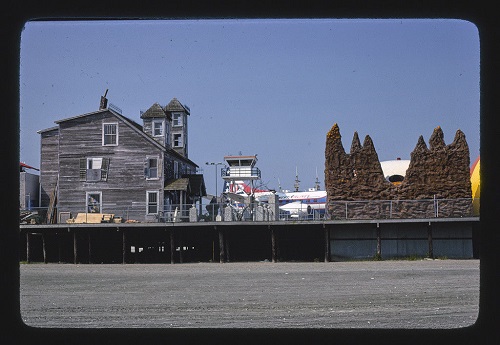 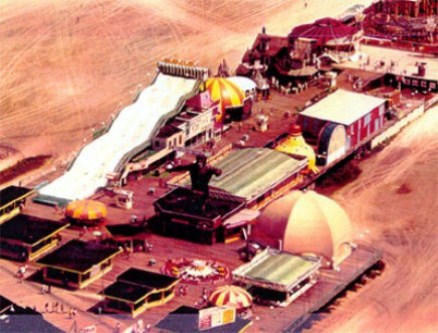 Scott Peterson sent us a couple of recent photos of this Futuro; thanks Scott. 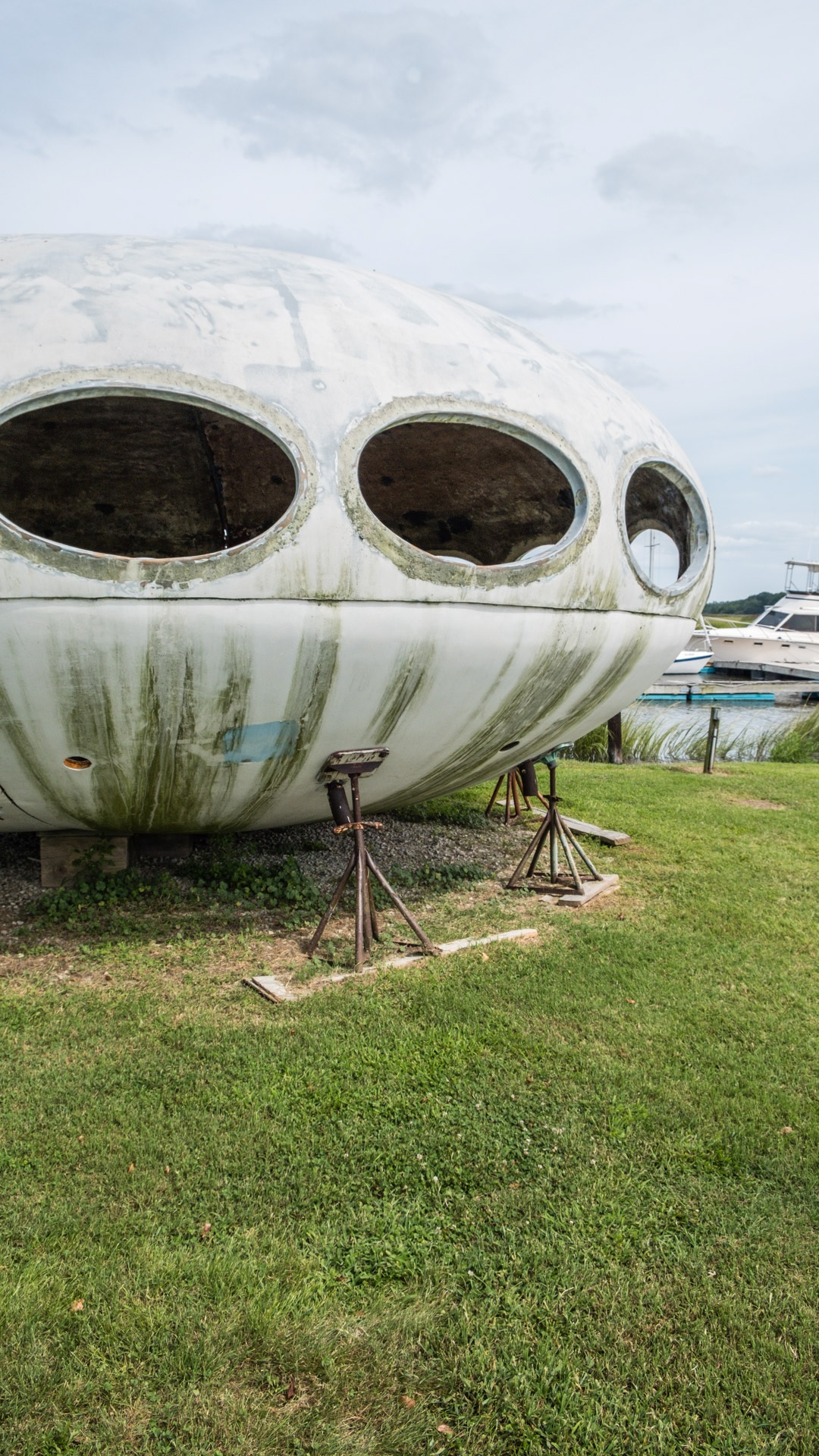 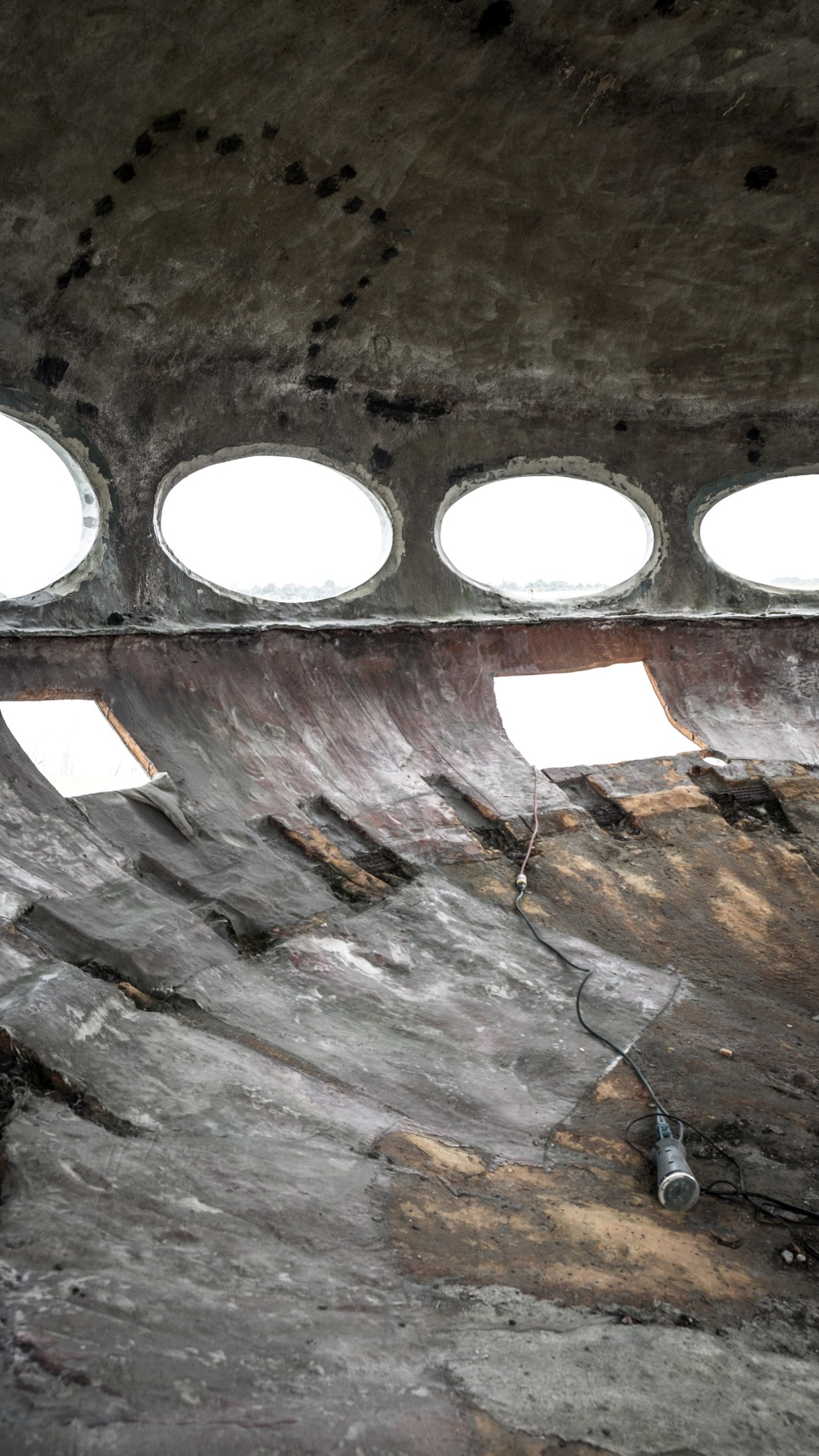 Drew Kidder sent us this photo which was taken 050816 so, despite indications that this Futuro was sold back in 2014, as of 050816 it is still in exactly the same location; either it did not sell after all or the new owner has not yet been able to relocate the unit. Thanks for the photo Drew. 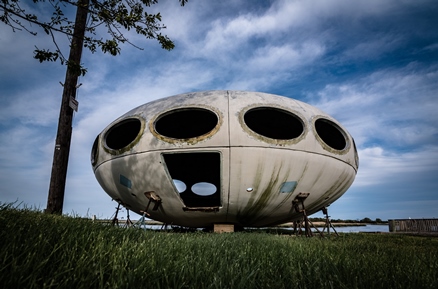 The E-Bay listings for this unit have ended (as of 051114 15:28 PDT). The listings were ended a couple of days early (they were originally set to end 051314). The price of $26,900 is struck out and the indication is that a "Best offer price" was accepted; purely conjecture but presumably the offer was somewhere close to asking or the listings would not have been ended early. The Craig's List listing is still active (as of the time of writing).

The Futuro House is something of a niche interest but every now and again it goes "mainstream" for a few days. The listing of the Greenwich unit on E-Bay precipitated such an event. A large portion of the internet seems to be comprised of "aggregators" that generate no original content but rather pick up (often by automated feed) and present articles and content from other sites and articles authored on one site can be repeated on dozens and sometimes hundreds of sites.

The Huffington Post among others picked up on the E-Bay listing and articles on that site and just a few others have spawned literally hundreds of "repeats" (for the record a few are New2000, Noozilla, ajc and wopular but Google searches would reveal many more). In addition buzz60 posted the video below which, with some commentary, is really just screenshots of the E-Bay listing. The original video can be found on YouTube.

As of today the listings on E-Bay and Craig's List are still active - on E-Bay the asking price has been reduced to $26,900 and the three listings here, here and here have attracted 101, 272 and 474 "watchers" and 1, 4 and 9 offers respectively (at the time of writing). There is no way to know if the Craig's List listing has generated any interest or offers (though with Craig's List being $12,000 higher than E-Bay for the same thing it seems the place to buy would be E-Bay and not Craig's List).

The original listing on Craig's List has now been removed and replaced by a new listing with an asking price of $39,000 and the unit is also now on offer on E-Bay with a "buy it now" price of $32,900. It is also listed on E-Bay here in the category "eBay Motors | Cars & Trucks | Replica/Kit Makes" and here "eBay Motors | Other Vehicles & Trailers | RVs & Campers | Towable RVs & Campers | Travel Trailers."

It appears that this Futuro is for sale. It is currently advertised on Craig's List for sale as a "Futuro Home Shell" for $25,000. It is actually something we might actually be able to consider at that price though of course then there would be who knows how much to spend on transport and restoration. Have to give it a little thought. If anyone is interested you can call Scott on (609) 501-6627 - please respects Scott's privacy - serious inquiries only.

The video below is by "The Unknown Cameraman" - the footage appears to be a composite of footage from Vernissage TV showing the Museum Boijmans Van Beuningen Futuro, the Willingboro Futuro and this Futuro in Greenwich. The Greenwich footage starts at 02:13. At one point in the commentary the video indicates the footage has been taken at various points in New Jersey - clearly the Vermissage TV footage was not shot in New Jersey.

We ordered a copy of the October 2003 Issue of Weird N.J. (#21) the other day; we just received it today. On page 63 there is an interesting article with a couple of very cool pictures about the transport of this Futuro to its current location in Greenwich.

From the article we learn that the trip took place on 032703 with the Futuro travelling from Delmont in Maurice River Township to Greenwich via Bridgeton. We also read that the Futuro was purchased by Scott Gifford from Tom Platt for $1,500 and that it was Tom Platt who had brought the Futuro from Wildwood.

Armed with that information we began to look at old satellite imagery available in Google Earth and, while the imagery is not good enough to be absolutely certain, we believe it is good enough to place the Futuro on Elizabeth Ave, Delmont, NJ (39°12'23.57"N 74°56'58.89"W). The two images below show satellite imagery from 123101 and 031091 respectively; the later of the two images had the Google Earth "Ruler" tool activated showing that the circular object is approximately the correct size for a Futuro. Later imagery dated 080406 shows that the Futuro was no longer on site at that time so the dates fit with what we know about this Futuro and support the article in placing this Futuro in Delmont for the period between it leaving Wildwood and arriving at Greenwich. 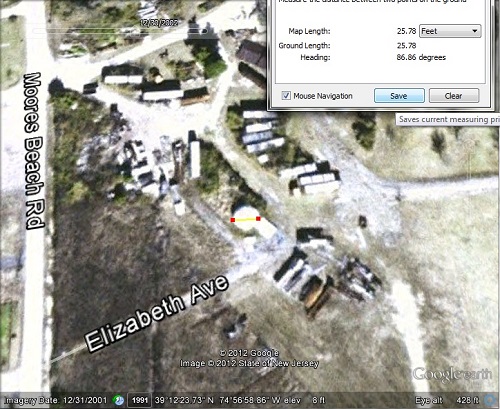 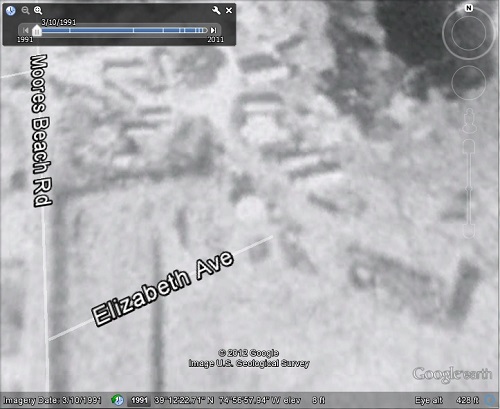 The Weird N.J. article is in conflict with this Press Of Atlantic City article; the former states that one Scott Gifford purchased the Futuro while the latter indicates the buyer was Matt Damon. Both articles indicate the purchase price was $1,500. Either one of them purchased the unit and subsequently sold it to the other (for the same price) or one of the articles is wrong; to be honest there is nothing upon which to base a decision as to where the truth lies so, at least for now, that will have to remain a mystery.

It seems like the world of Futuros is a small one indeed. In all of the times we have read the Press Of Atlantic City article about Matt Damon's purchase of the ex Morey's Pier Futuro we have never noticed the following until now:

"The Greenwich Futuro is the second Damon has owned. The first one he bought in Colorado but had to sell at a loss when the economy went south more than a year ago."

The article was published in 2009 so in theory that would put the sale of the one in Colorado somewhere around 2008. Unless there was a second Colorado Futuro the one being referred to is the one that was located in Bailey, Colorado until the second half of 2009. That Futuro has been sold several times; 2003, 2006 and at auction in 2009. Likely Damon owned it either for the period 2003 to 2006 or from 2006 to 2009. Either way that makes it likely that Damon owned two Futuros for a period of time since the 2009 Press Of Atlantic City article indicates he purchased the Futuro now in Greenwich "a few years ago".

While researching the "lost" Futuro at Seaside Heights, New Jersey the other day this Futuro and Morey's Pier came up again; for more information and photos of this Futuro during its time in Wildwood check out the Seaside Heights section of the "Lost Souls" page.

On another note PC_Rider posted some great shots of the Greenwich Futuro in a 020410 post on the site Adventure Rider. 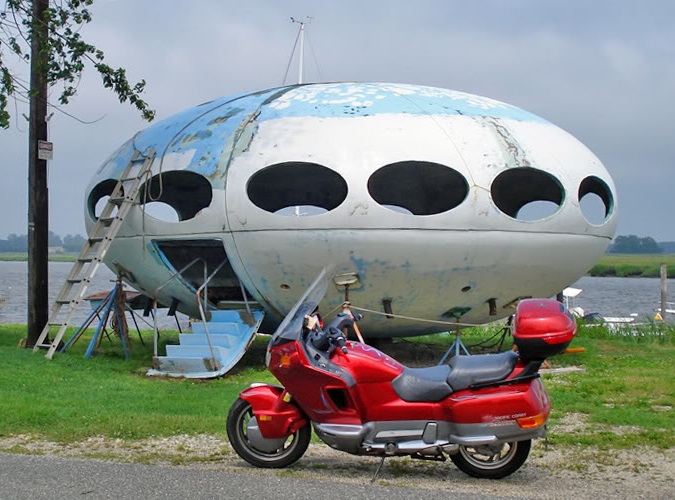 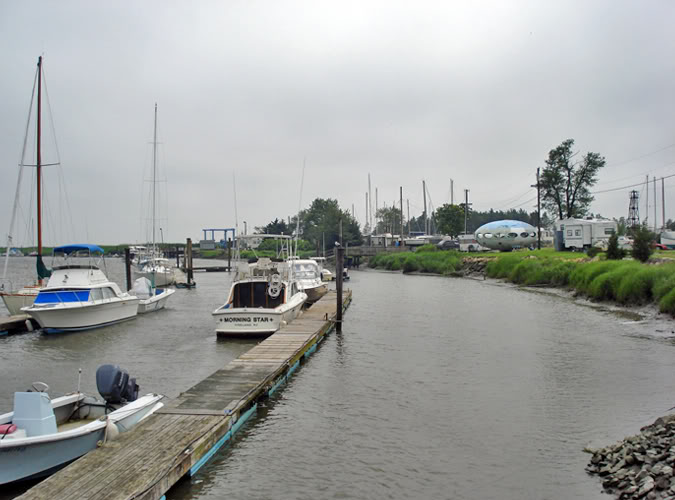 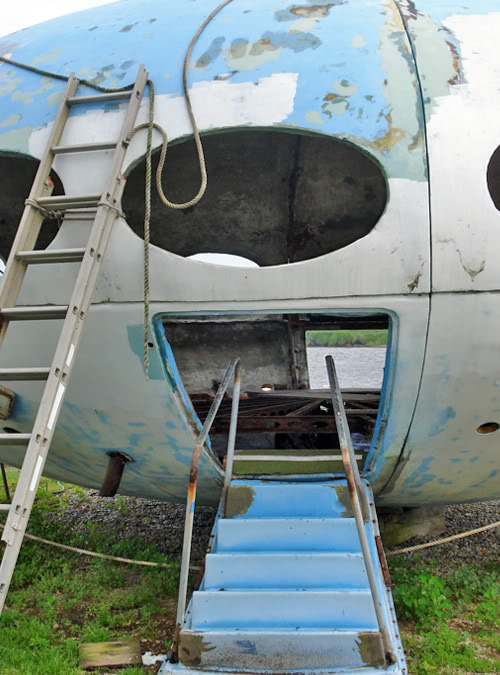 like, totally took the following two photos of this Futuro 073112. The photos are displayed under CC 2.0. 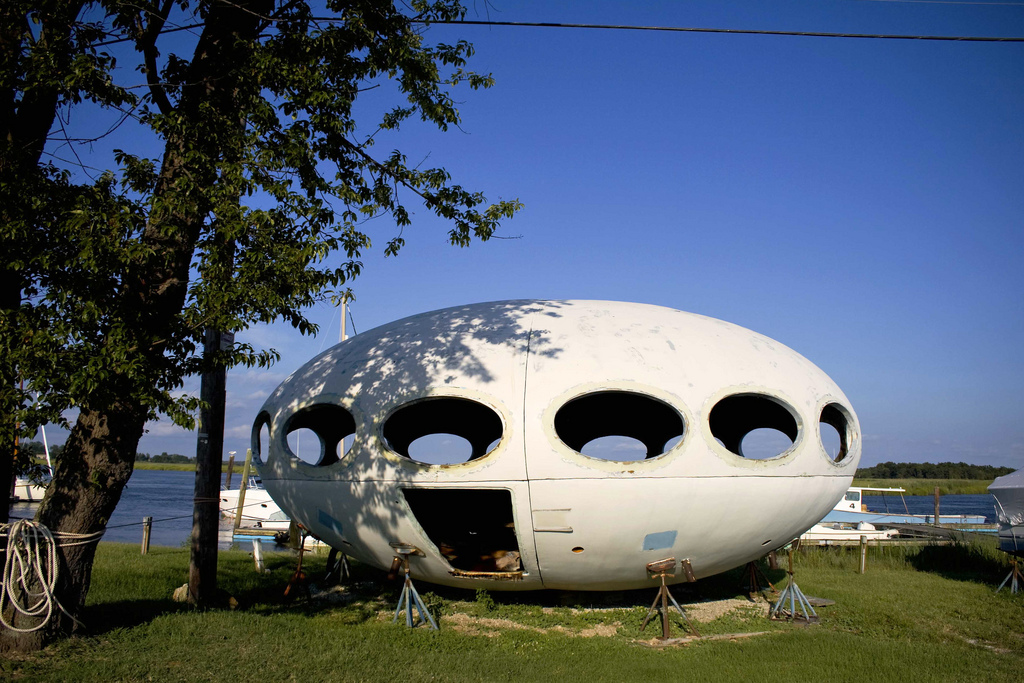 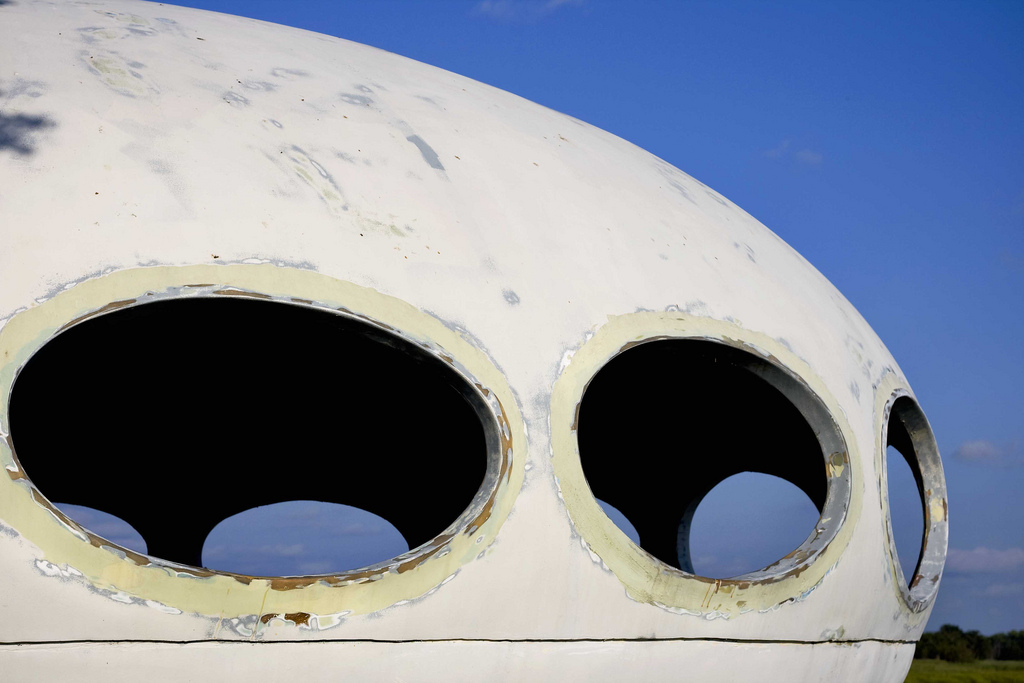 This Futuro House spent it's early years as an amusement ride at Morey's Pier in Wildwood, New Jersey. We have no idea whether it went straight from manufacturing to the "pier" or if it "lived" somewhere else in between but with video available of it in action on the pier in 1974 it could certainly not have been that old at the time it arrived at Morey's.

The current owner of the house is New York furniture dealer Matt Damon who purchased it for some $15,000 and as of the end of 2009 had spent some $65,000 on refurbishment work. In a December 2009 article on PressOfAtlanticCity.com Damon was quoted as follows:

"I knew it was a really, really old piece, but it was such an iconic piece and it just so much embodies everything the '60s stood for ... For me, being a modern-furniture dealer, it was like the trophy, the white elephant. So I went out and got it."

The video below includes footage of this Futuro during its time as a ride at Morey's Pier in Wildwood, New Jersey in 1974. The Futuro House appears around the one minute mark.

This photograph by gardenstatetrekker taken 112021.