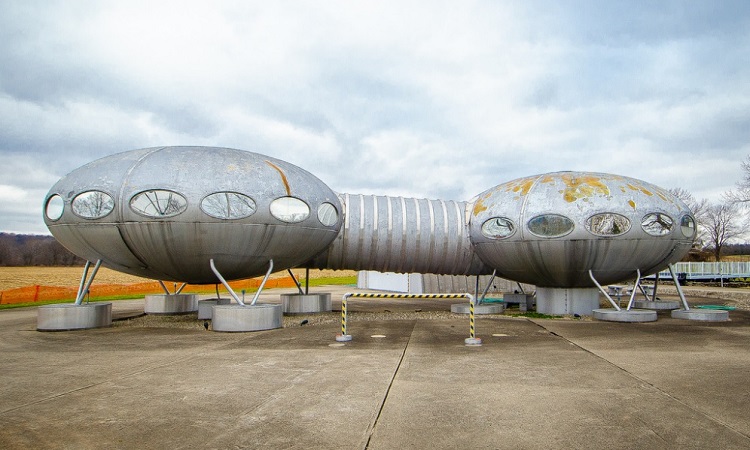 For several years Dirk Fletcher had wanted to visit and photograph the Futuros in Carlisle and recently he finally got to make the trip.

He was disappointed that he arrived later than planned when it was almost dark but he took some shots anyway. Honestly we think the results include some of the best shots we have seem of these Futuros; the low light adds to the atmosphere of the photos.

On the second of the two photos below Dirk commented that it reminded him of something "straight out of a JJ Abrams movie just after the aliens landed and before assimilating into our population"; we could not agree more, its a great shot!

Dirk's original photos can be found on Instagram here and here.

We recently took a road trip to visit family but we were also able to take the opportunity to stop by some Futuros; Danvers, Covington and this pair in Carlisle (this takes the count of Futuros we have personally visited to 15½).

Dale and Ali who own the Futuros in Carlisle were kind enough to take some time to visit with us and also give us a look at the interior of their Futuros.

They confirmed most of the history of the units as previously recounted though reports of the second arriving on Carlisle by helicopter are not true. That second Futuro, from New York, arrived by truck just as the first had.

As far as the interior of the Futuros is concerned we would love to share but we will simply say that they are awesome and unique and leave it at that per request from the owners. 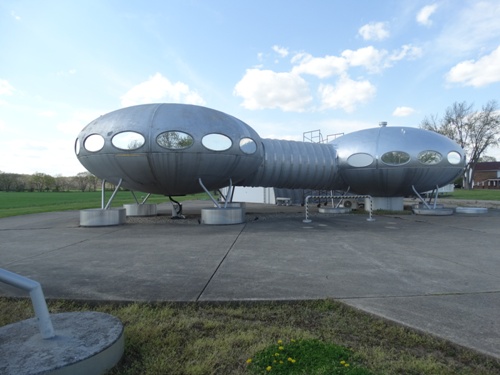 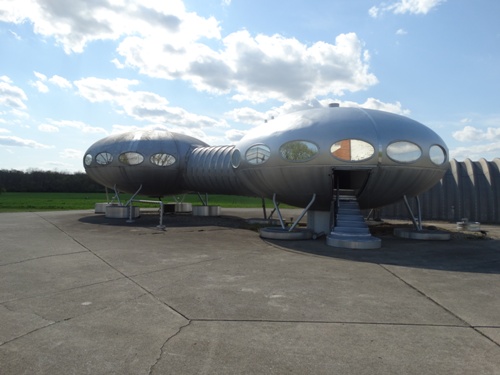 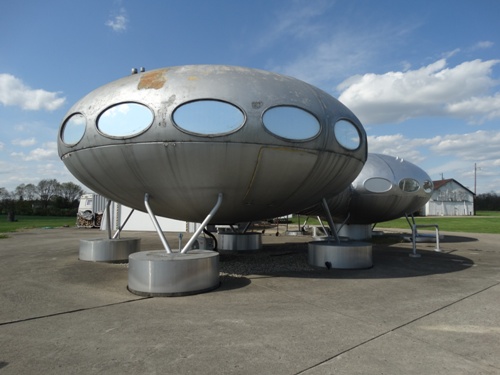 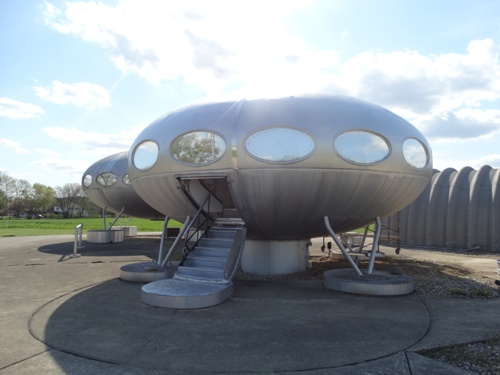 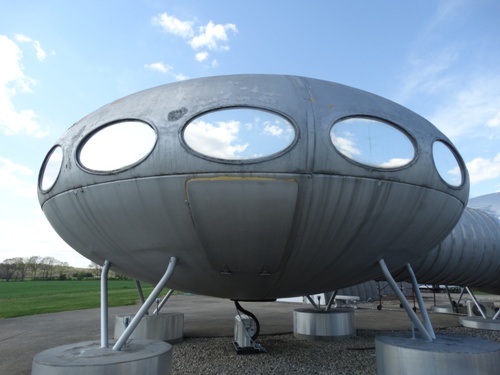 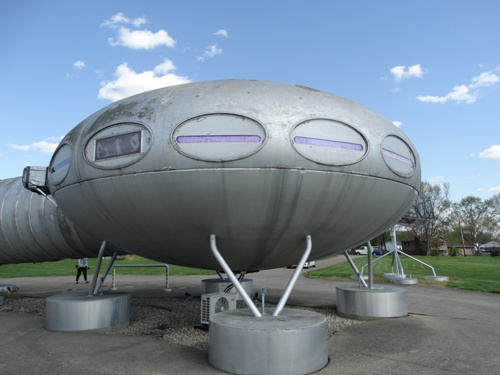 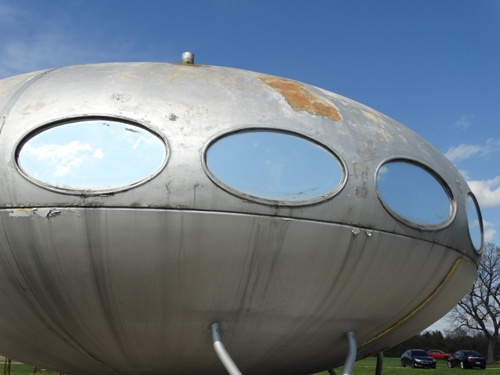 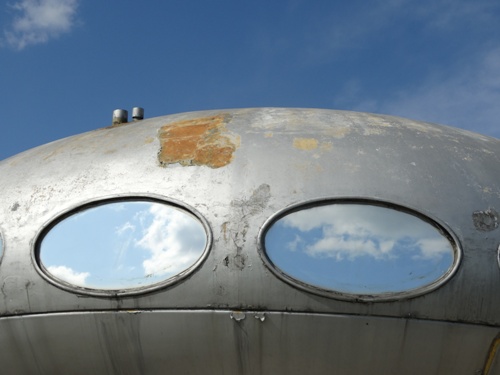 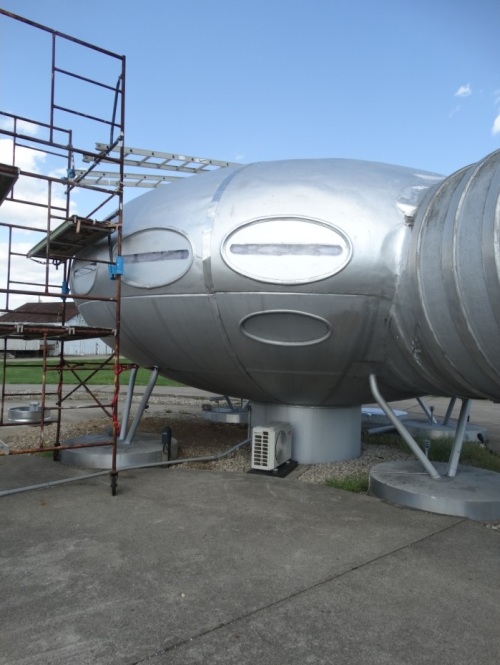 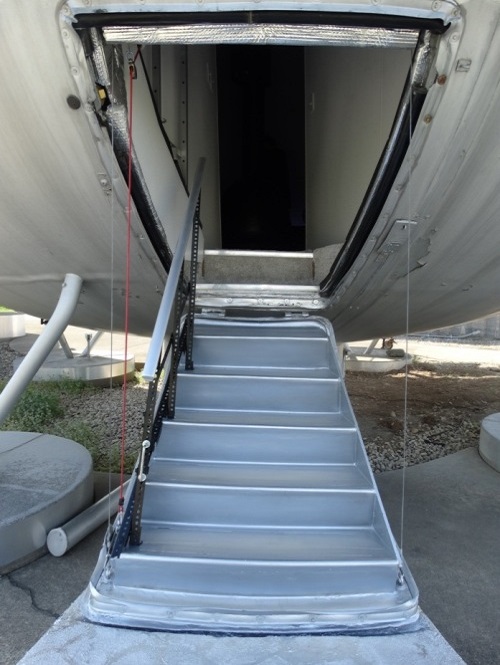 We came across some cool video footage and some great photos of these units recently; unfortunately they clearly illustrate the fact that time is taking its toll on this pair of Futuros with their condition definitely in decline. The video was posted to Youtube 081819 by talksmart 081819. The photos were posted to Instagram the same day by thevampirechronicles. 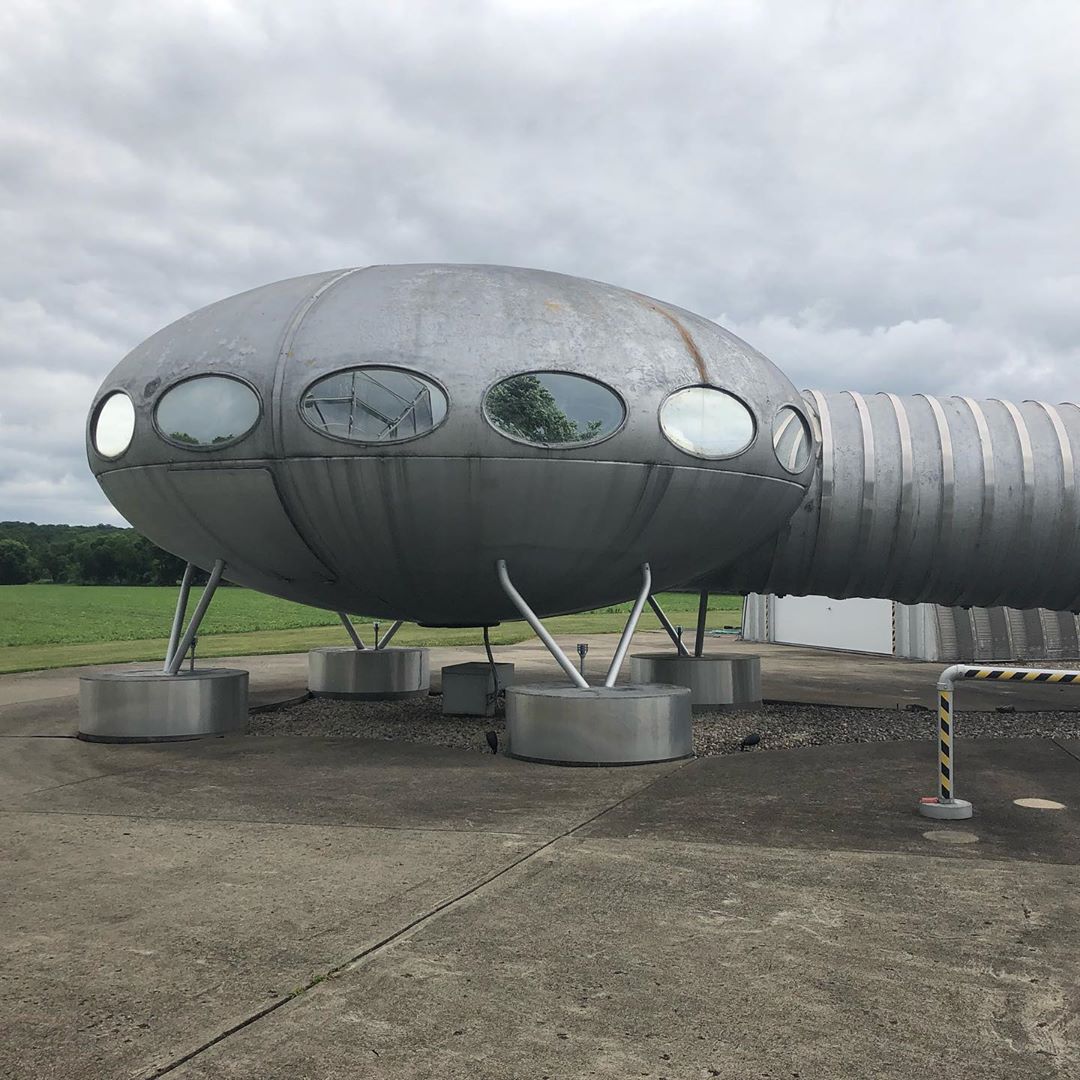 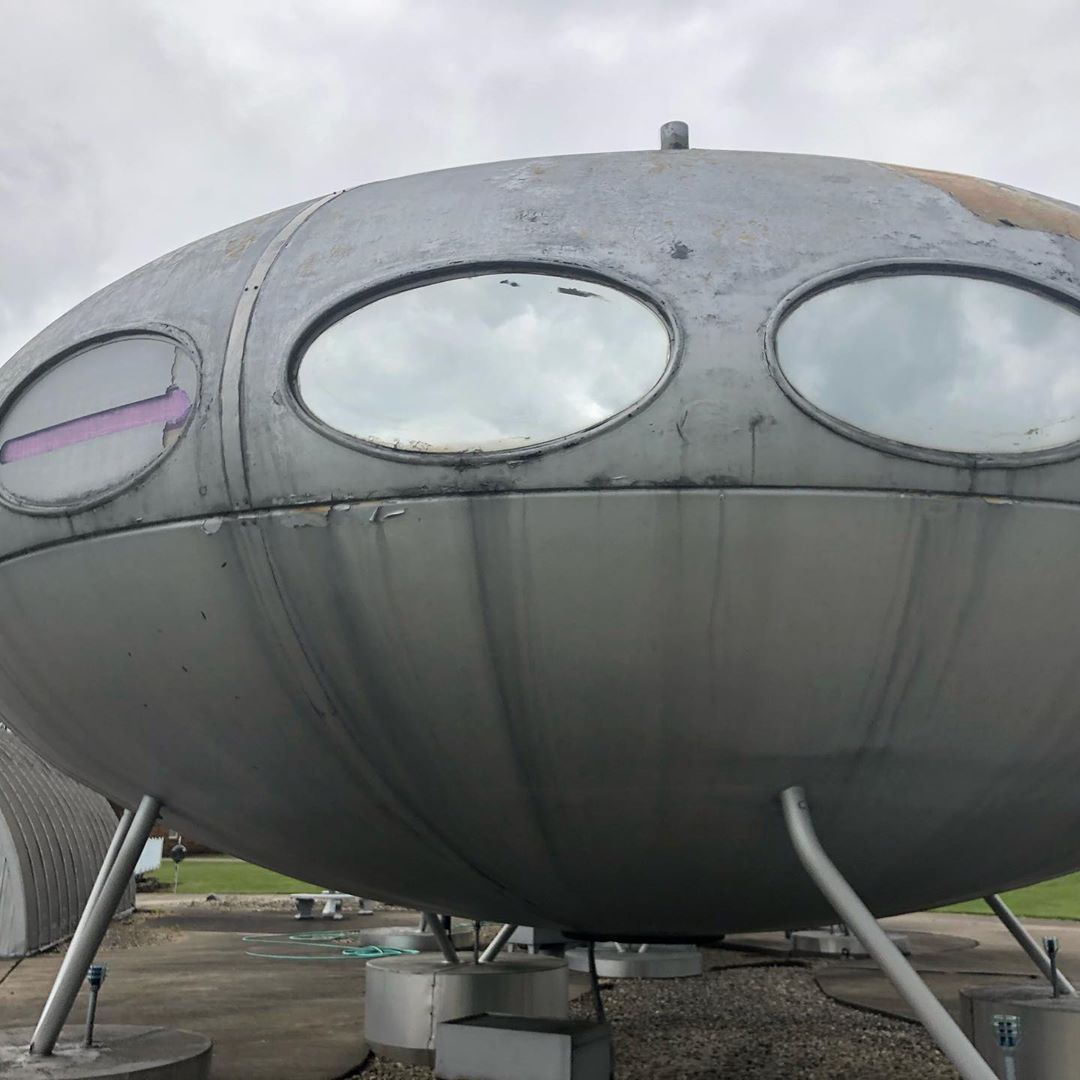 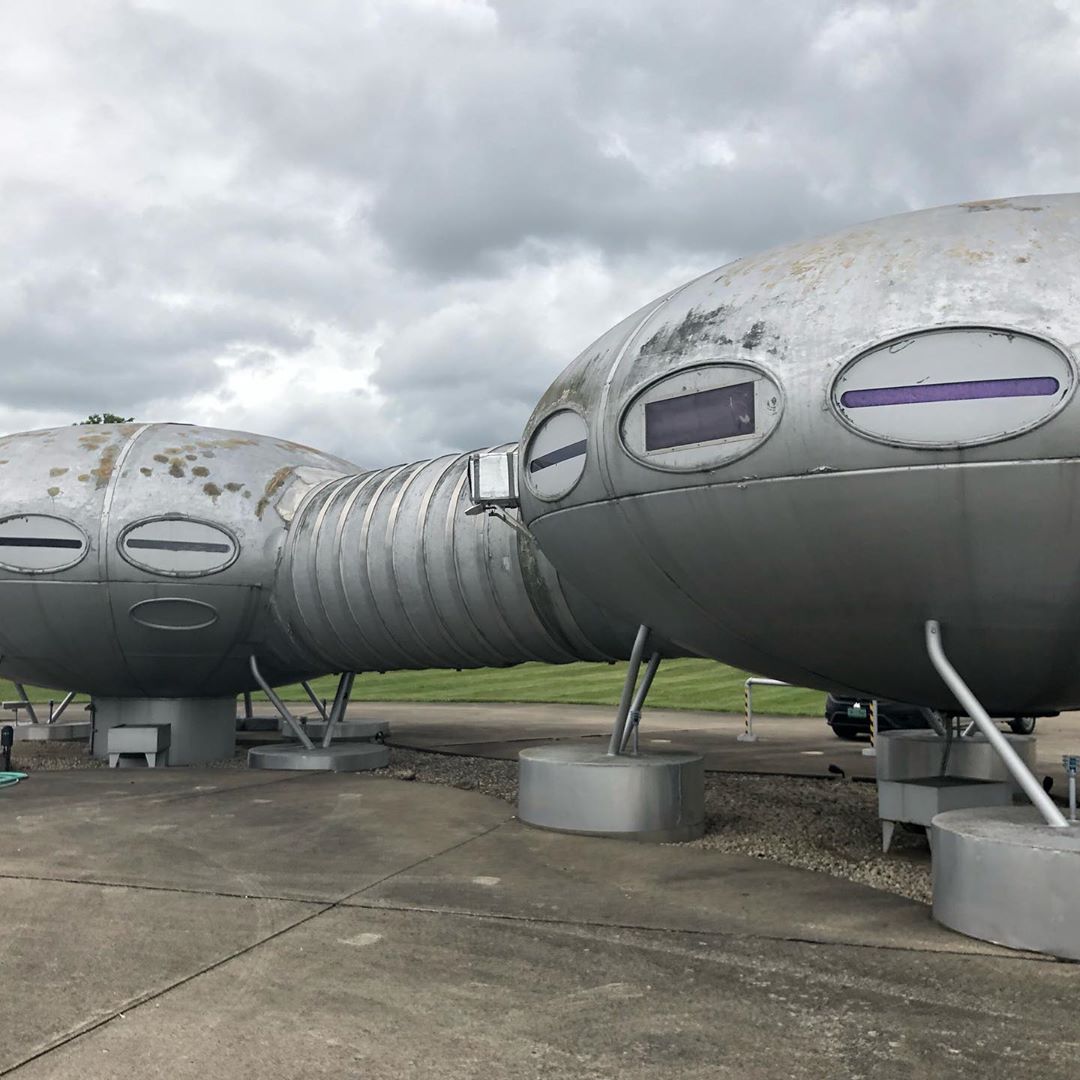 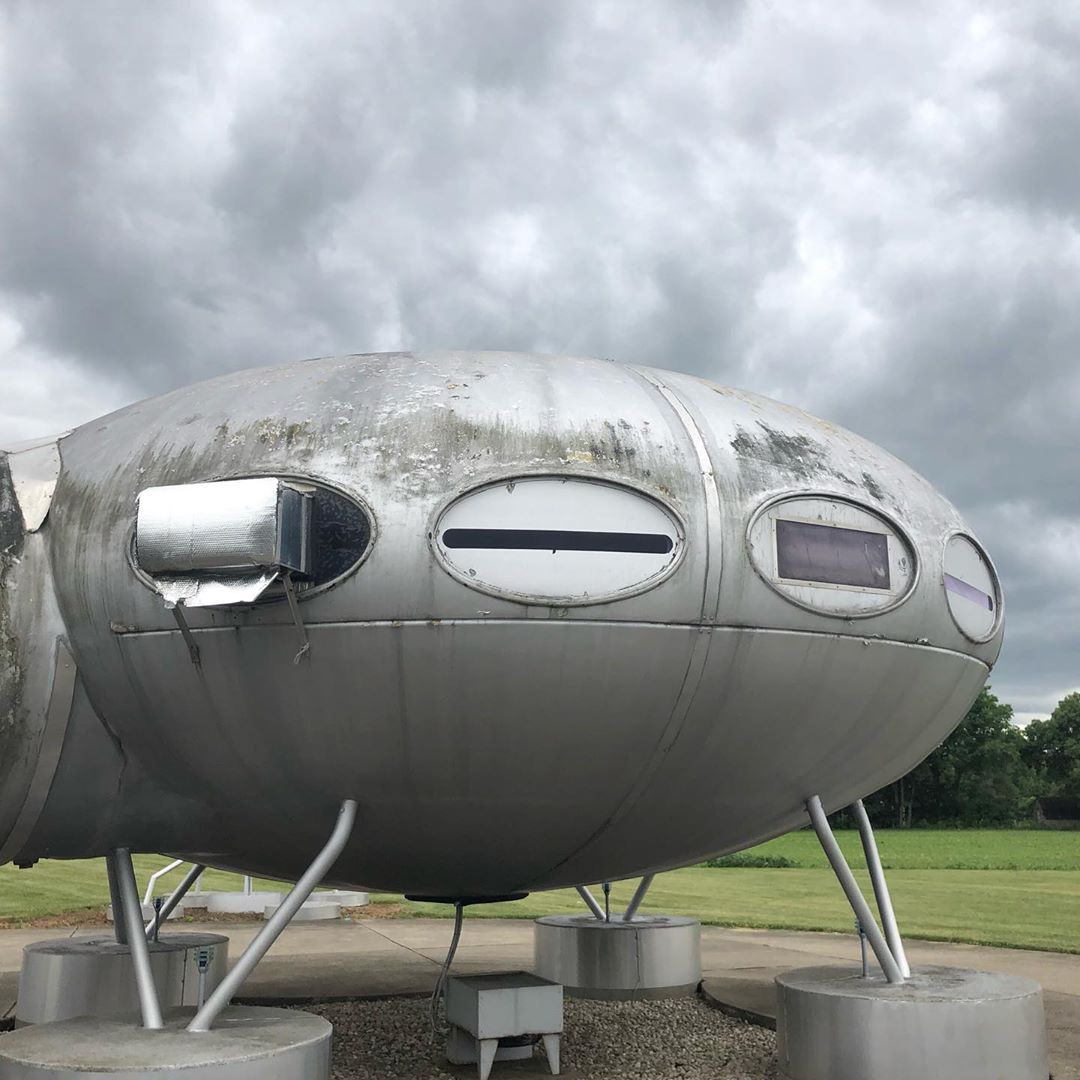 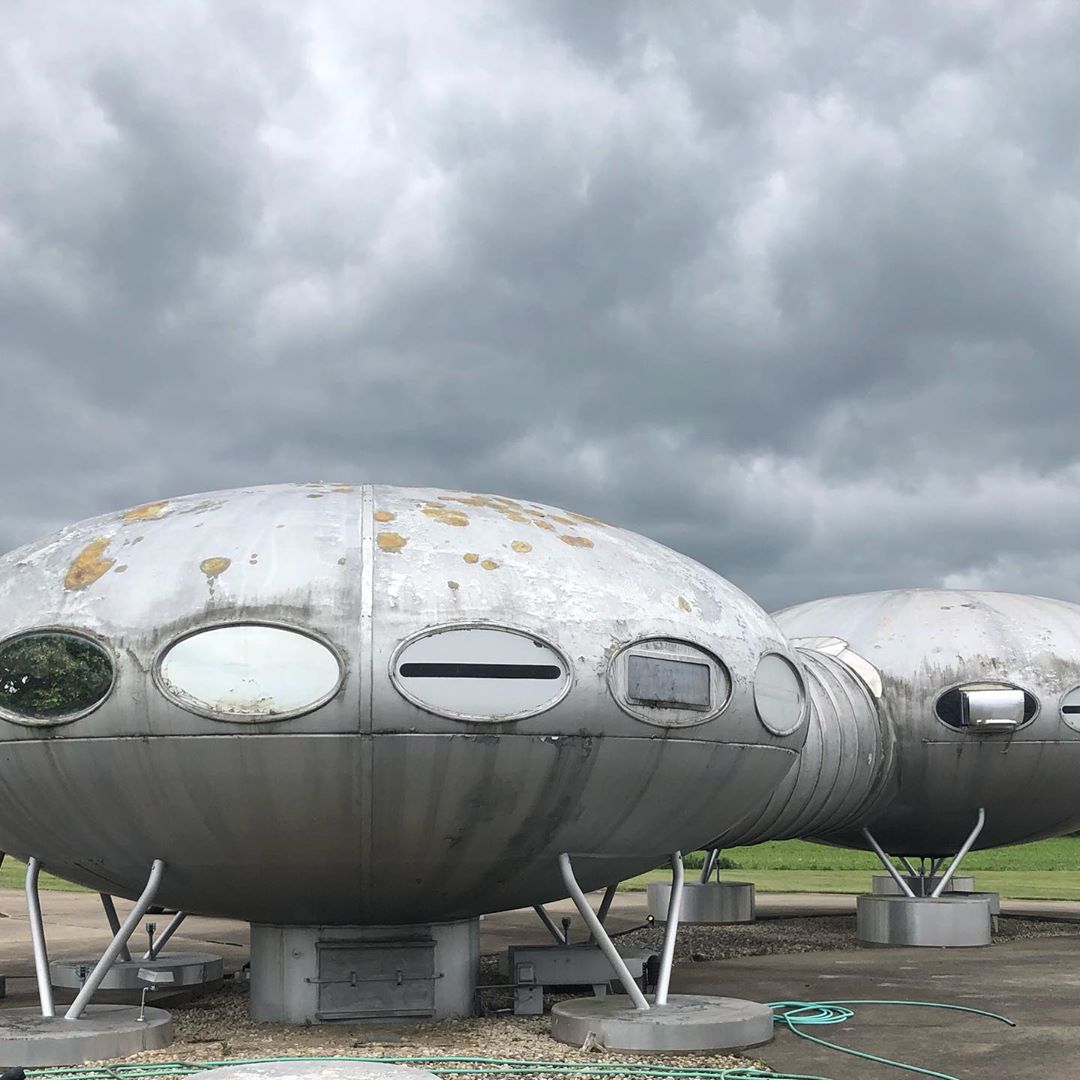 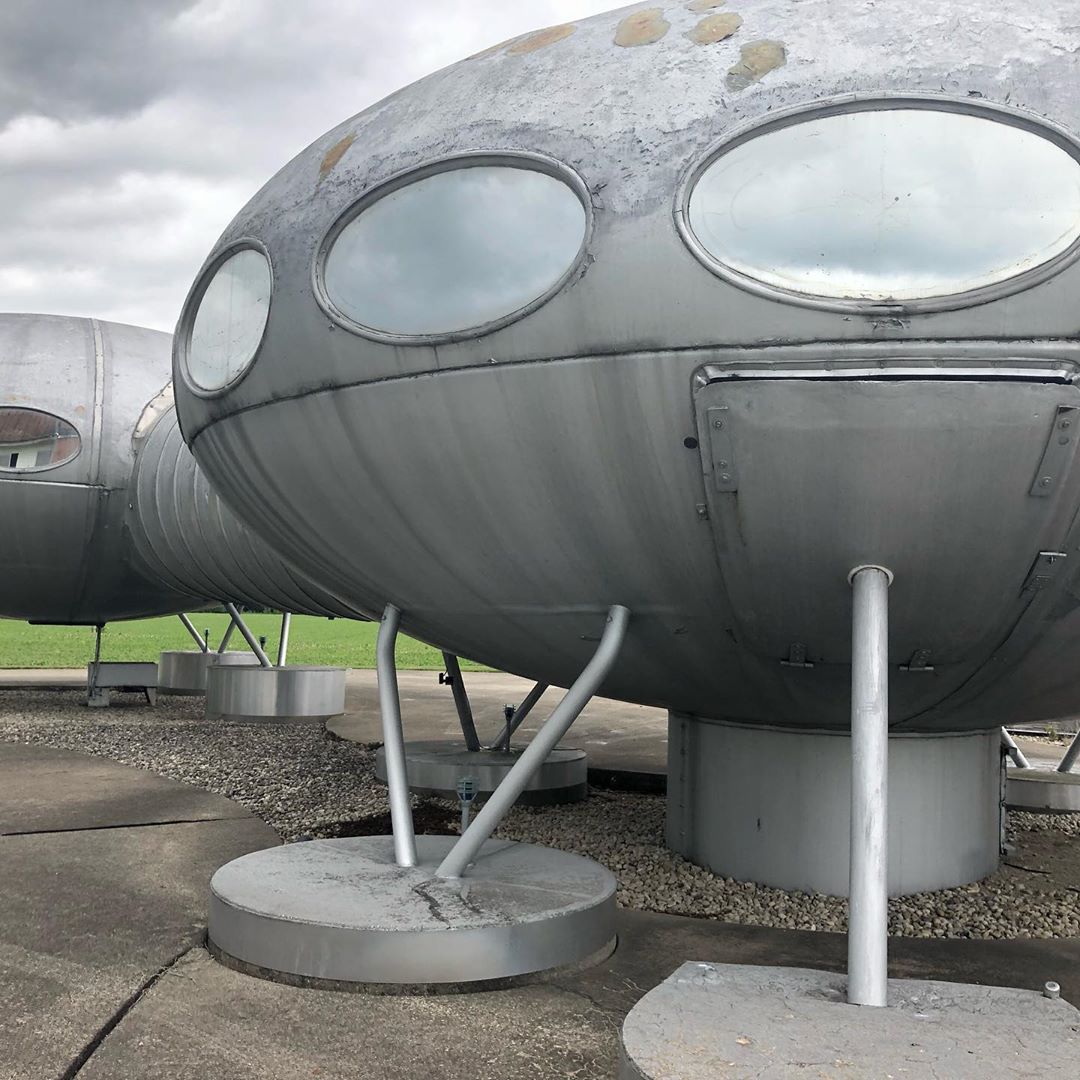 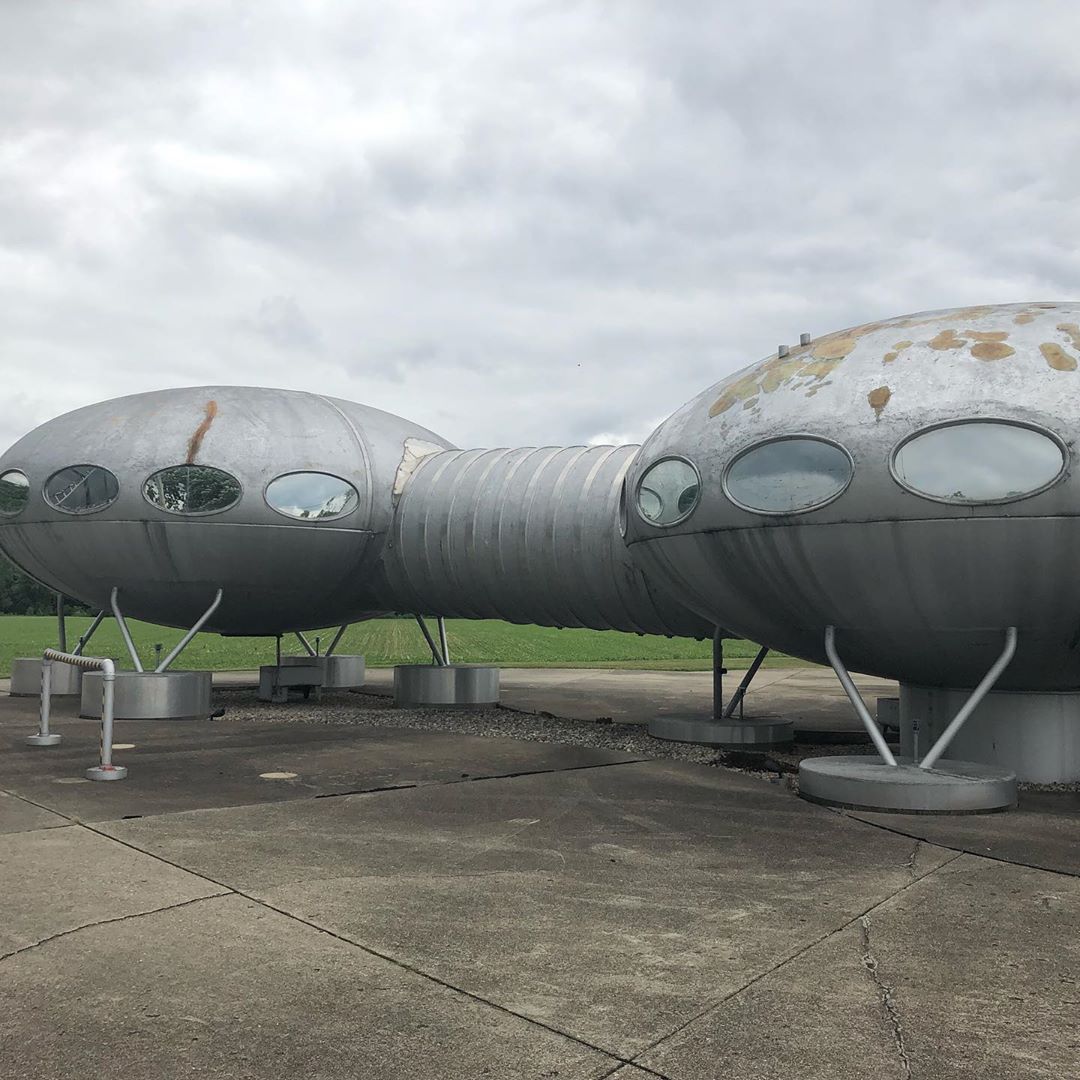 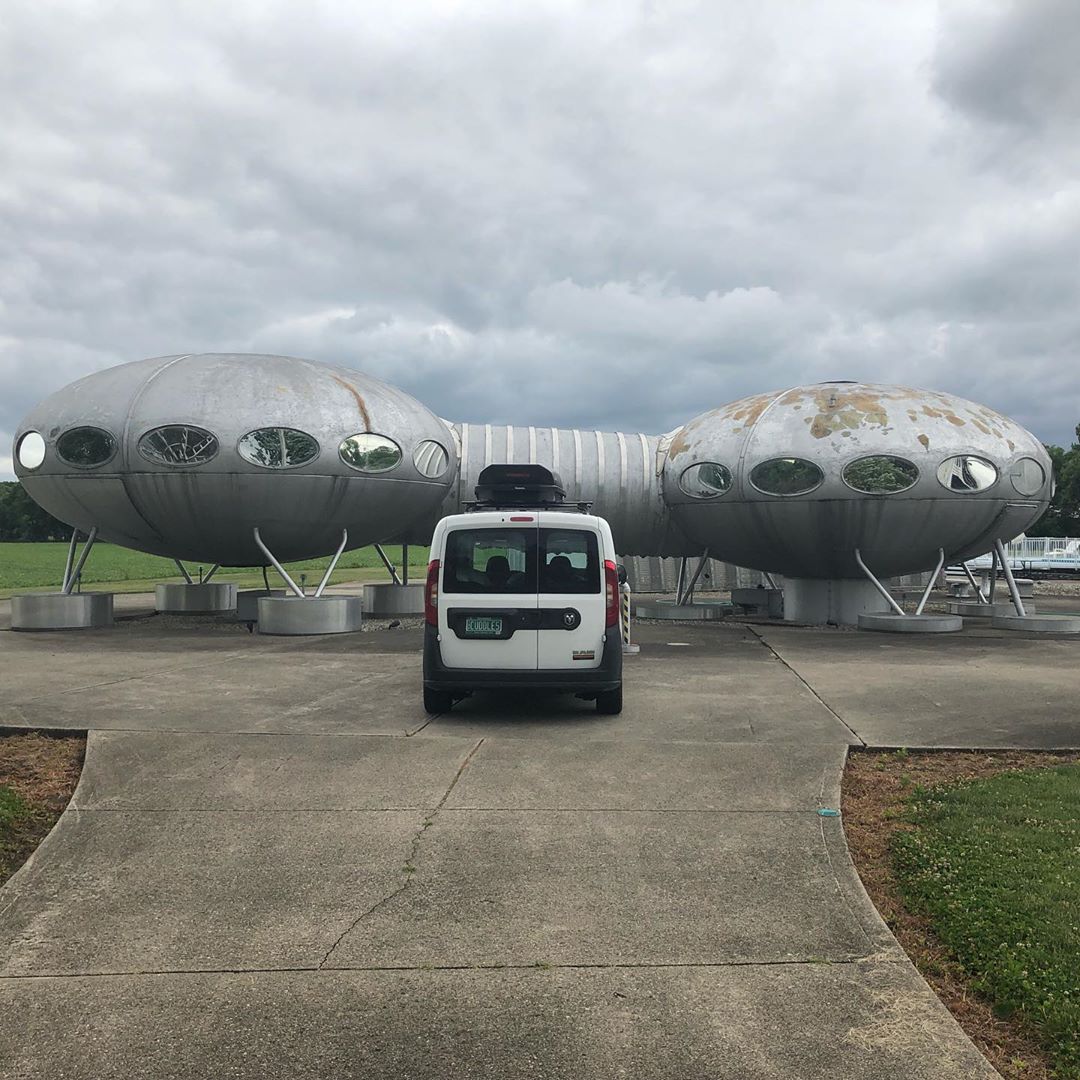 These great photos of this pair of Futuros were posted to Flickr recently by Matt Allouf; they provide an excellent recent look at the units and their condition. Thanks for sharing them Matt! 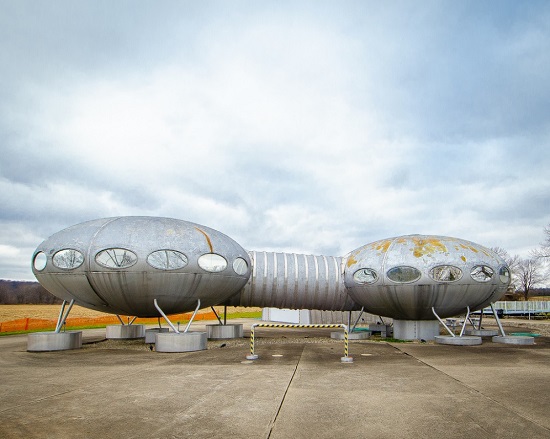 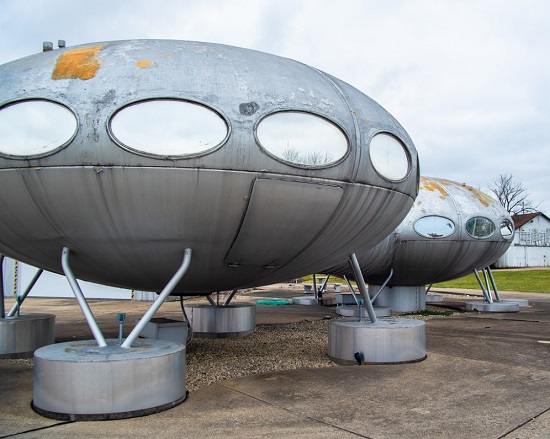 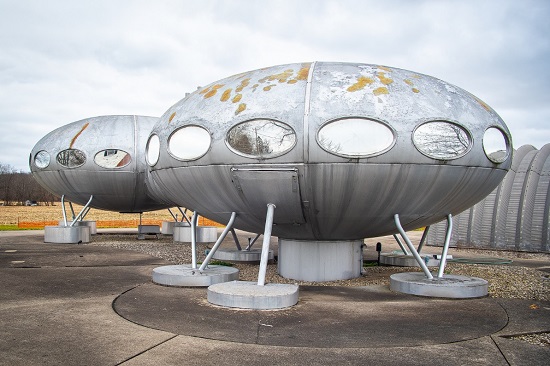 There is a photo of these Futuros and a DeLorean a little further down the page. We recently came across this photo by hotrodshopinbfe which continues that same theme but with a very different style of vehicle. The original photo can be found on Instagram here. 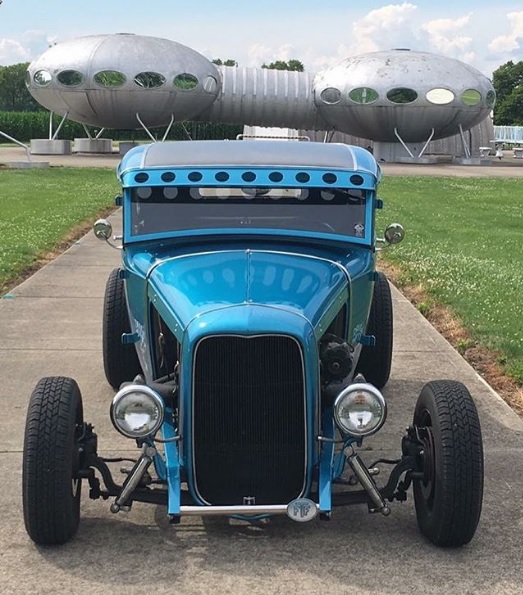 An email we received recently from Allison Gibbs added a little additional information about the history of these units. Allison wrote that the Futuros:

"... were owned by the Martz family, long time residents and business owners. From what I understand, the first one to be installed was (previously) at the Wright Brother's Airport in Springboro, OH. It was delivered by a flatbed, super-wide semi. The second, from the stories I've been told, used to be a doughnut shop somewhere. It was put in place with an aerial drop by helicopter. Quite the to-do in a small, suburban farm town, circa early 1980's."

This confirms earlier information about the previous location of one of the Futuros but also adds new information regarding the second unit having previously served as a doughnut shop. Also interesting, and new, is the information that the second unit was flown into Carlisle by helicopter.

Thanks for the information Allison.

We received an email this past week with a little history on one of these two Futuros from Tom; thanks for the information Tom. Tom tells us that:

"One of these Futuros was originally installed at Dayton Wright Brothers Airport. It was there for several years in the 1970's, but was then moved to the current location that you show. I do not recall when the second Futuro was added nor where it came from. It has been there in the configuration shown in your photo for many years, at least 15 years."

So far we have been unable to find any additional information about or photographs of the Futuro at the Dayton Wright Brothers Airport. As always if you can add anything be it history, personal recollections or photographs please let us know.

We did recently come across this nice photo of these "twins" as they appeared 111914 wearing their "winter coat". The photo was taken by army.arch *Adam* and is displayed here with Adam's permission; thanks Adam. The original photo can be found on Flickr. 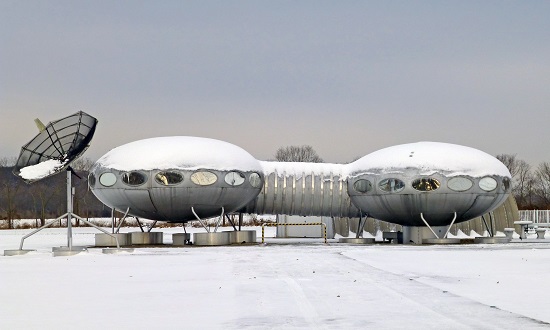 In 2013 the Royce City Futuro was the subject of an April Fool's joke on PlanetRockwall.com; one year later in 2014 the Carlisle Futuros were similarly used in an April 1st article on Cincinnati.com.

In the article (which now includes an update indicating the article was a marketing ploy by MetroParks of Butler County that took advantage of the April Fool's tradition) we read that:

"Butler County park rangers are investigating after a passing motorist reported strange phenomena at the park (Voice of America Park) Thursday morning. The man ... told park officials he observed an "odd-shaped piece of construction equipment" ... he observed several workers with the vehicle, but as he approached, the workers "scrambled" into the vehicle, which then began to make an "odd humming/vibrating sound" and "disappeared completely," ... The man provided a photograph he said he took of the object with his mobile phone ... "

The photograph was of course a photograph of this pair of Futuros. I wonder which Futuro will be so used next year? 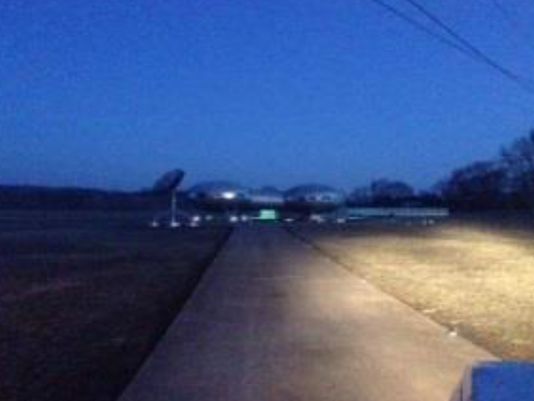 Uniquester visited the Carlisle "twins" 032213 and captured this great close-up shot. The photo is displayed here with permission.

We came across this photo by Jeremy Popp on DMCTalk.org; the photo is undated.

There is something of a parallel between the DeLorean and the Futuro; both could be said to be "futuristic" at the time they came out (and arguably still so today) and both ultimately failed in the "mass" commercial sense but subsequently achieved something akin to "cult" status. We often find the "green eyed monster" stalking us when thinking Futuro and Jeremy Popp and his Delorean seem to give rise to a similar feeling. 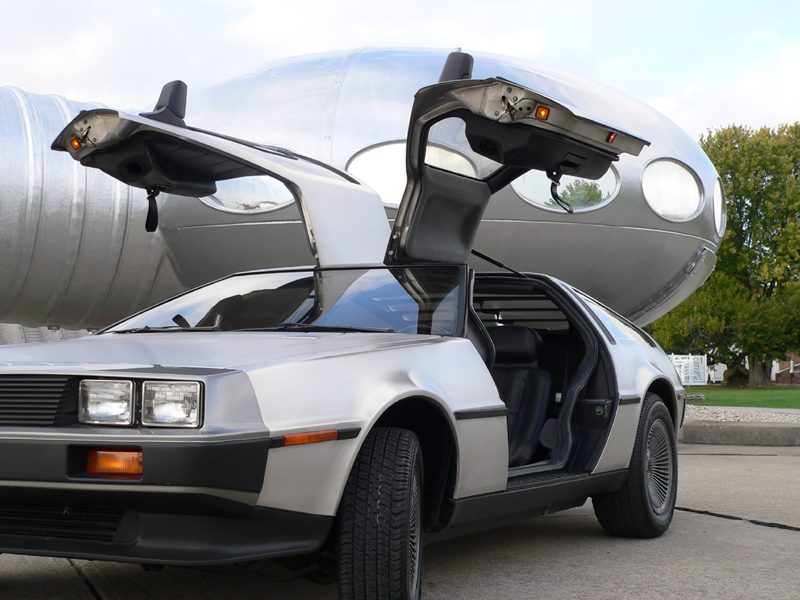 Other than the video by ZX2ManDave and the photo links below along with a few other photos out there we cannot seem to find any information on this pair of Futuros other than a comment by Jan Segrest on RoadSideAmerica.com from 101200 to the effect that they had been on site for years and are (or at least they were at the time) "lived in" and the fact that the Wikipedia Webpage on Carlisle, Ohio mentions the Futuros.

We would love to find out more about these Futuros so if you have any information please let us know.

A few photos of this pair of Futuros can be found by following these links:

This photograph by shuffledscenes taken 110722.