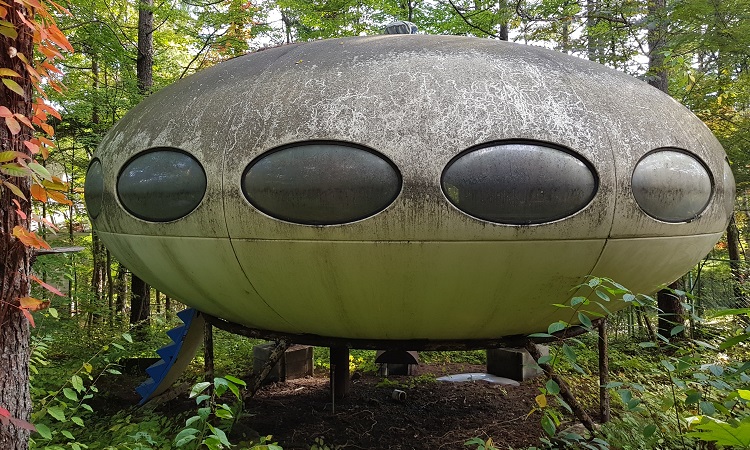 TheVictorianK recently contacted us to discuss a video they were producing about this Futuro. This video, titled "Exploring Abandoned Japan: The Futuro House" is the end result; we rather like it. In particular the use of interior photos transposed to recent ones is very effective and interesting.

Based on Matti Suuronen's Futuro CV we know that two Polykem manufactured Futuros were exported to Japan in the 1970's; it was thought likely until recently that those units were installed in Yokohama and Karuizawa (though there has never been any real evidence we have seen to support the reports that one was installed in Yokohama).

Then, in the 061519 update to this page we added historical information pertaining to both the Japanese Futuros based on some great research by Michael Gakuran (which also included translations of several Casa Brutus magazines from our collection). The main takeaway was that two Futuros were installed in Karuizawa; one remains on site to this day while the second was moved to Maebashi in the early 2000's.

Whether that means Yokohama never had a Futuro or that there were three Futuros at one time in Japan is unknown though we tend to think, based on the lack of any real evidence for a Futuro in Yokohama, that two and only two Futuros were exported to Japan and that they were both installed at the same site in Karuizawa.

Recently we received an email from Eddy which included a link to a Japanese mapping service with some very interesting imagery from the mid 1970's. Specifically there was imagery that showed both Futuros on site in Karuizawa. A screenshot of that imagery is below.

This imagery dates from somewhere between 1974 and 1978 (so far we have been unable to ascertain the exact date; there may well be a way to do so but even with the assistance of Google Translate we have not yet figured out how) and clearly shows the two Futuros on site at the same time (the unit that remains at Karuizawa is visible in Google Earth satellite imagery at exactly the same lat/long starting with imagery dated 2006 and running through to the latest imagery dated 2018).

In the 70's imagery we see far fewer structures in the area (and far fewer trees) than in recent photos and video; there has clearly been a great deal of development (and tree growth) over the last several decades.

The urban exploration community seems to have latched onto this Futuro for the moment. This video is one of several that have started to appear; it was published to Youtube by Exploring With Josh on 101319.

This video popped up on Youtube recently, our thanks to Greg for the "heads up". The video is by Exploring with Fighters and was added to Youtube 100519. The commentary seems to be somewhat "tongue in cheek" and we do not learn anything new but there is great footage of the Futuro, both exterior and interior.

Michael Gakuran runs, among other websites, gakuran.com which he describes as "tell(ing) stories of (his) adventures, ruins (haikyo) explorations as well as writing about Japan and the Japanese culture".

On 052119 Michael published an excellent article on the two Japanese Futuro Houses (this one and the one in Maebashi) titled "Space Oddity: Japan's Lost Futuro House". We had corresponded a little with Michael as he was researching the article and his immersion in the Japanese culture, ability to read/translate Japanese and his tenacity when it comes to research allowed him to piece together additional details of the history of the two Japanese Futuros previously unknown to us.

In large part Michael started piecing together the historical details by looking over past issues of Casa Brutus; these were magazines we have in our collection but we had never had the opportunity to get them translated. Casa Brutus first mentions Futuro in a special on Nordic Design which included the Futuro in the Summer 1999 seasonal issue.

Then Michael tells us, in early 2001, the Casa Brutus team received a somewhat cryptic message from their Northern European office that read:

As a result the editorial team visited Finland to attend a one hour meeting/interview with Futuro architect Matti Suuronen. During that interview the team learned that two Futuros had been exported to Japan though they learned nothing of their location. The interview was published in the April 2001 issue of Casa Brutus; check out Michael's article for a translation of parts of the interview.

Following publication of the April issue the Casa Brutus team got a tip and managed to contact one Sadao Watanabe who recalled a "Futuro left sleeping in the woods" and in late spring 2001 the Casa Brutus team found themselves on a road trip with Mr. Watanabe to try to located the Futuro. After an hour or so of searching the area the Futuro was located and it was subsequently featured in the July 2001 issue of Casa Brutus.

However, that was not all, that was in fact the second Futuro the Casa Brutus team saw that day because Mr. Watanabe was also the proud owner of his own Futuro house (which they actually visited first).

We are told that Mr. Watanabe's Futuro was "perched one thousand meters up a mountainside forest, located on a storage site for construction materials". It had previously been used as Mr. Watanabe's "personal karaoke box" though it had been unused for three years at the time. An interview with Mr. Watanabe reveals some interesting history (translation courtesy of Michael Gakuran - thanks Michael):

"CB: "So you're not the original person who imported this Futuro, right?"
Watanabe: "That's right. I was tasked by another company with demolishing it." he begins. "There were actually two disk-shaped buildings at that time, but the one further back was blocked by trees and couldn't be destroyed."

CB: "What state were the Futuros in when you were asked to demolish them?"
Watanabe: "You know it looked like it had become a couple's (love) nest, being left unguarded like that. It seemed like young people had broken the window at night and were going inside."

CB: "How did you move such a big object?"
Watanabe: "One piece was around three meters so it wouldn't fit on a truck. I used a couple of two-ton trucks and a large trailer to move it. Because it was made of plastic we were able to move it with about two people."

CB: "What about the assembly?"
Watanabe: "I put it together in my free time between work. There was an incredible amount of screws and no plans to refer to, so I had to rely on my instinct. Sometimes the parts wouldn't fit and I had to use a saw."

CB: "It's pretty dirty isn't it?"
Watanabe: "At first the surface was actually really smooth and shiny. When Mt. Asama erupted (a hydrovolcanic explosion) in the nineties, a lot of particles invisible to the eye flew over and stuck to it. After that it started to get dirty."

CB: "What about the other Futuro?"
Watanabe: "It was several decades ago... I don't know if it's in the same place now or not..."

Over and above the fact that Mr. Watanabe was actually engaged to demolish two Futuros but ultimately purchased and moved one and left the other perhaps the most interesting thing we learn here is that there were actually two Futuros at the location.

We have always believed that the two Futuros imported to Japan were initially installed in Yokohama and Karuizawa though that has always been based on anecdotal rather than well documented evidence. This interview suggests there may never have been a Futuro in Yokohama after all.

As previously stated the second Futuro was indeed "in the same place" as in fact it is to this day.

The July 2001 issue of Casa Brutus ended with a comment that read:

"We just couldn't bear to see a Futuro left in such a sorry state. So the Casa editorial team is planning to restore this historical experimental home it to its former glory. If we're successful, a Futuro might visit Tokyo this Autumn. Will it be restored!? Watch this space to find out!!"

Futuro next appears in the October 2001 issue of Casa Brutus where a Futuro is listed for sale at 5M yen (about $46K at today's exchange rates). The location is not mentioned but the assumption is that it was Mr. Watanabe's Futuro since we know the Karuizawa Futuro remains in the original location.

The Futuro is again listed for sale in the November 2001 issue of Casa Brutus where we also learn that the editorial team would be transporting it to the Tokyo Designer's Week on 11th-14th October that year while a new owner was still being sought.

Also notable was that attendees could get an original Casa tote bag sporting a Futuro design by buying back issues of Casa Brutus at the event! Michael has searched for one online and now we will have to add that to our list of items to search for to add to our collection of "Things Futuro".

The December 2001 issue of Casa Brutus featured a multi-page spread documenting the Futuros visit to the Tokyo Designer's Week that included a nice set of photos.

The article ended with the editorial team indicating "they (would) reveal the new landing location of the Futuro in a future issue". Seems likely that new location was Maebashi though we are unaware at this time of a later Casa Brutus article that actually "revealed" the location.

As is often the case early Futuro history can be conflicting and confusing but Michael's work does appear to suggest that Yokohama was never a Futuro location in Japan; rather the two Japanese Futuros were both installed in Karuizawa with one remaining there to this day and the other eventually finding its way, via Mr. Watanabe, to Maebashi.

Many thanks to Michael for his research and translations, for sharing and allowing us to "paraphrase" parts of his article and also for allowing us to share some of the photos he took when he visited Karuizawa which can be found below.

Don't forget to check out Michael's other explorations at gakuran.com and read in full his Futuro article "Space Oddity: Japan's Lost Futuro House". 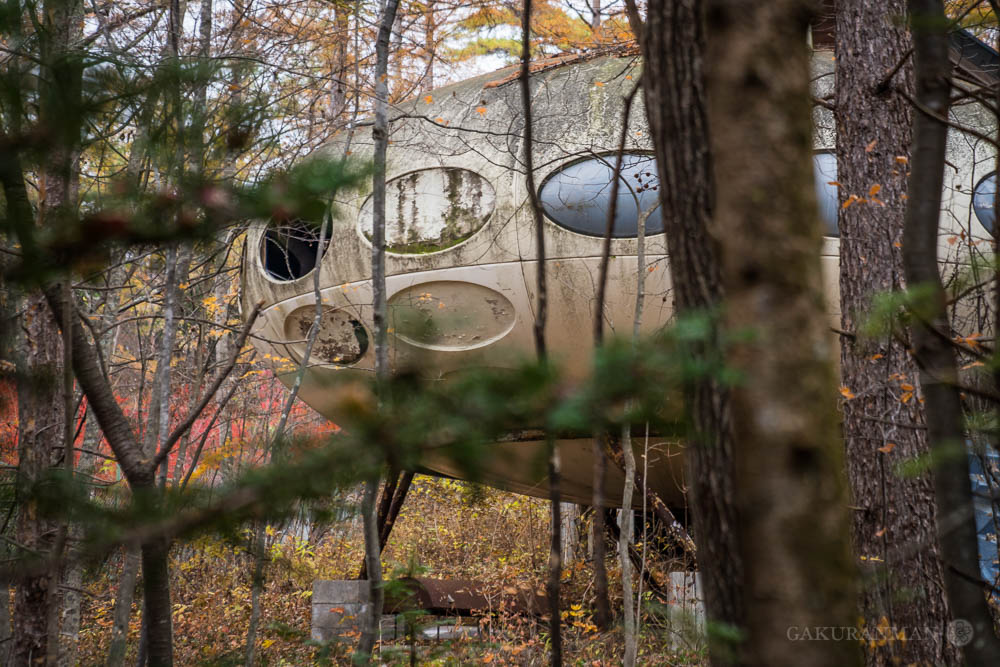 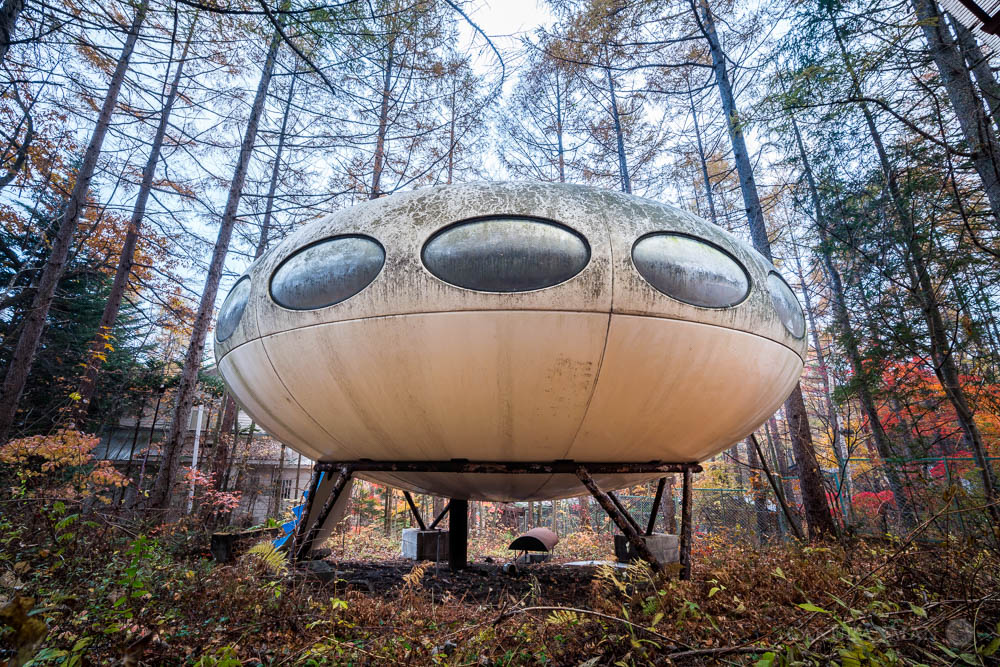 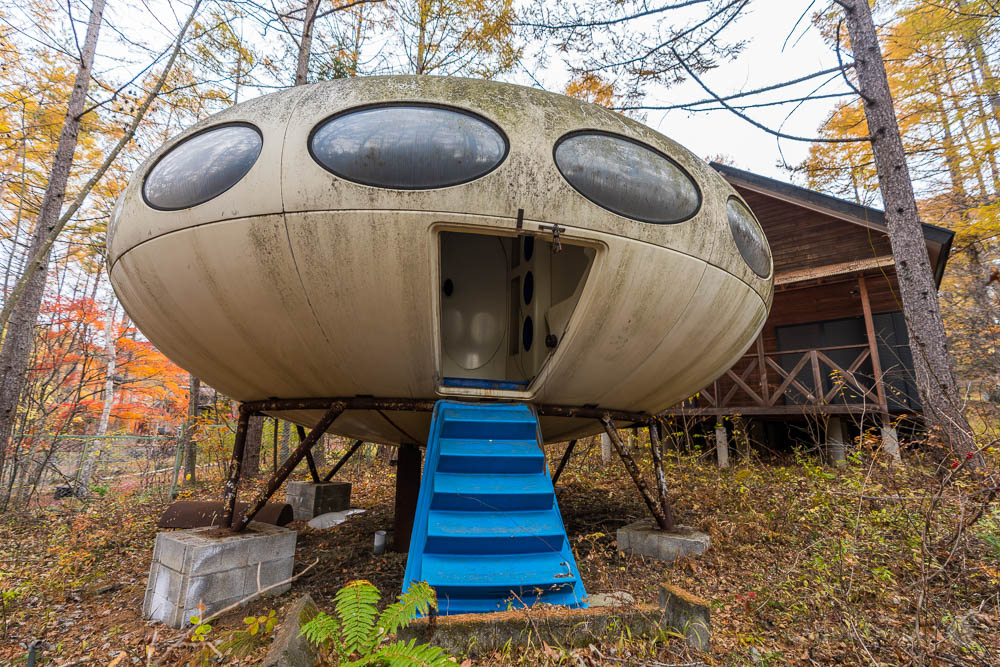 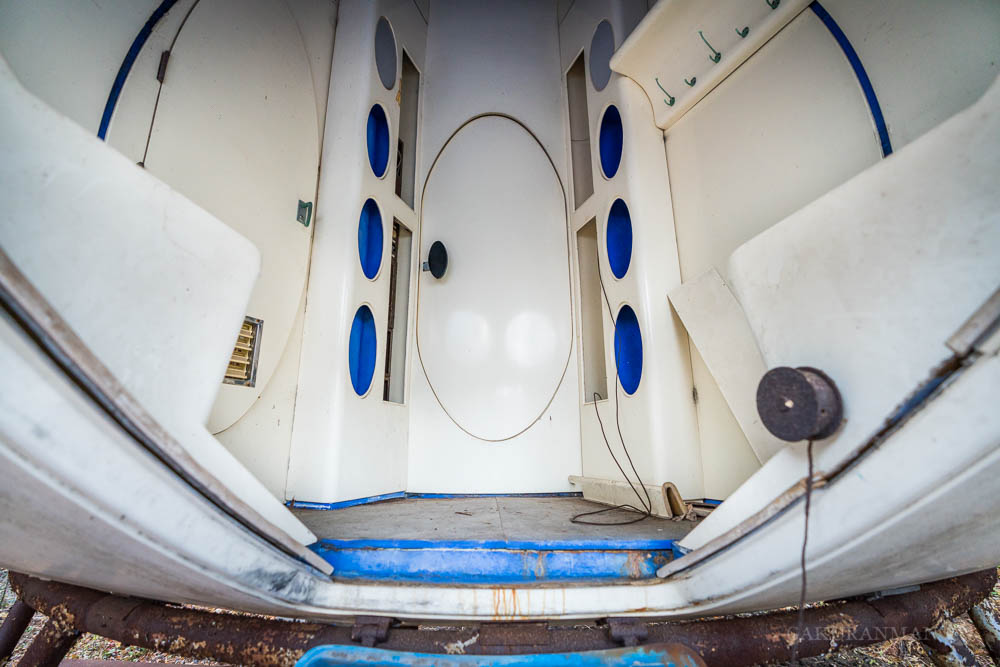 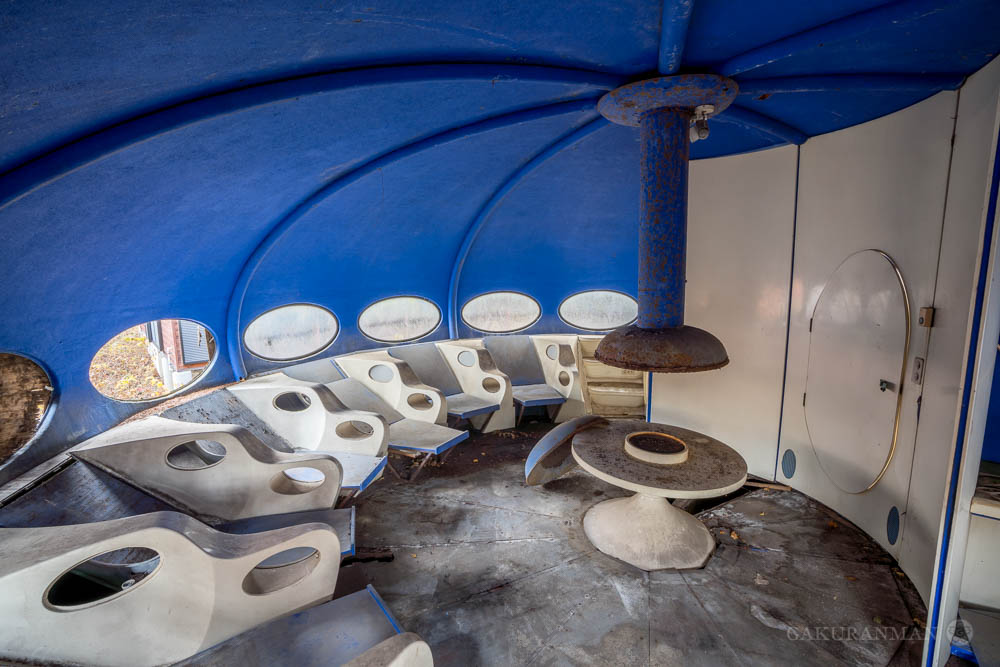 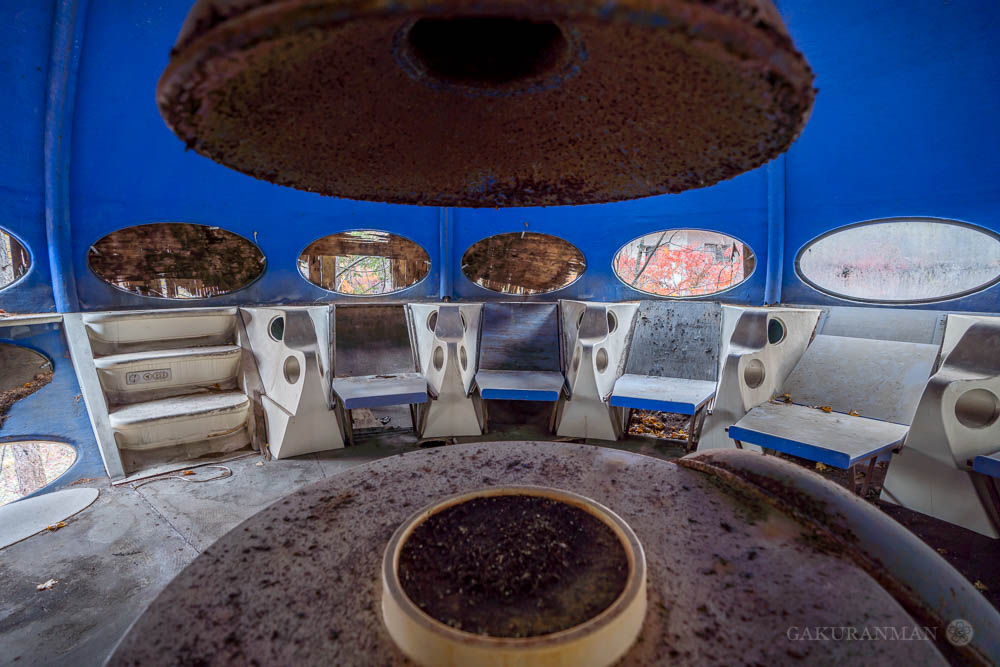 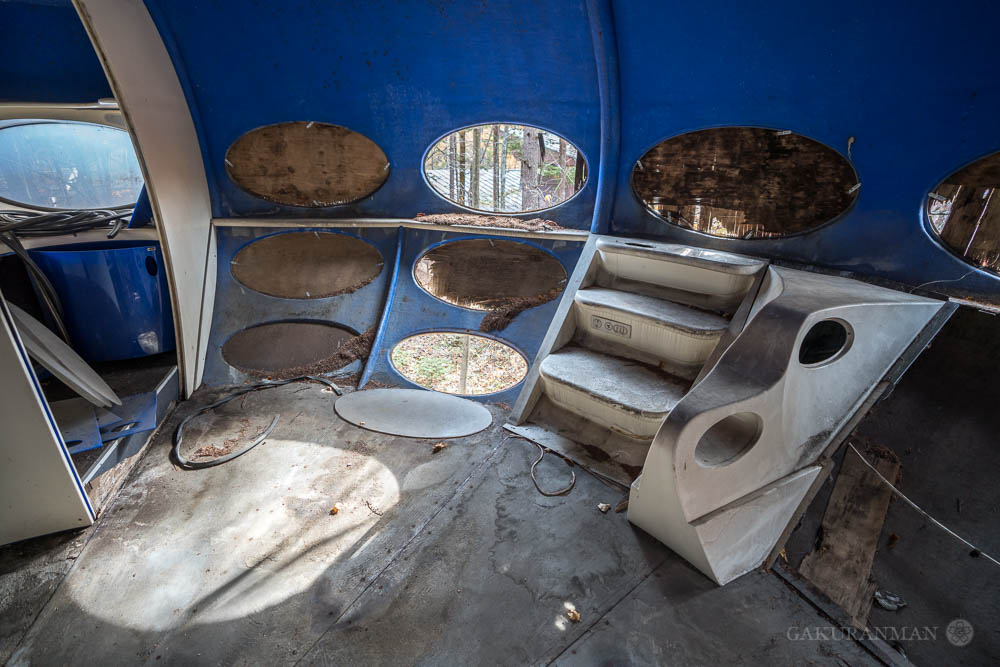 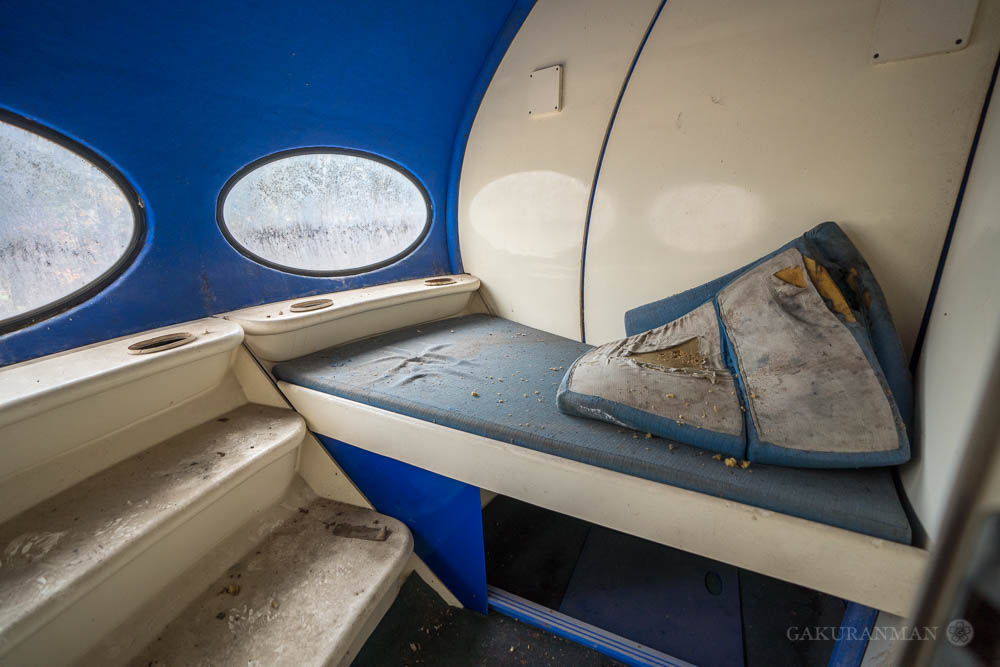 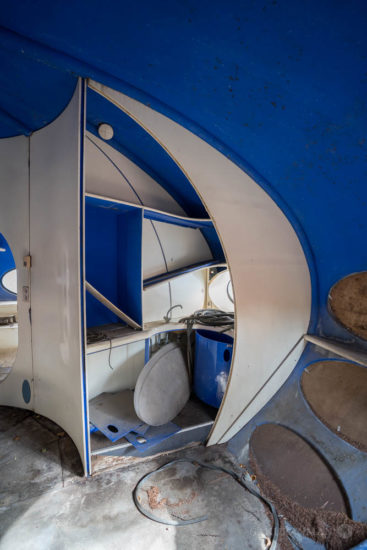 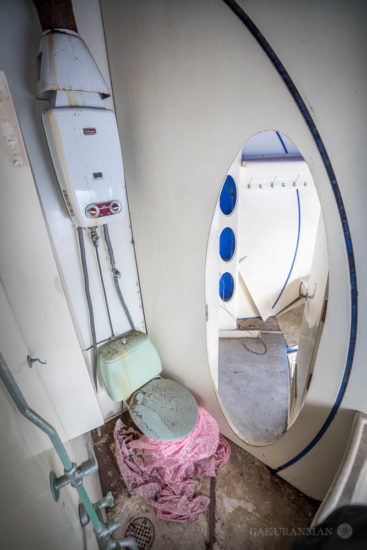 Matti Suuronen's Futuro CV (see the "Finnish 20") indicates that two Futuros manufactured by Polykem were exported to Japan. These Futuros were, to the best of our knowledge, installed in Yokohama and Karuizawa.

The current locations of the these two Futuros has to date been unclear. One was almost certainly the Futuro now located at the Felicia Academy in Maebashi but until now it was unclear which one and there is evidence the one installed in Karuizawa was still there until 2001 based on a "for sale" listing (see issues 16, 19 and 20 of Casa Brutus) but there was no indication of what had happened, if anything, to it post 2001.

That all changed this week when James Cashmore sent us an email following a visit to the Karuizawa Futuro just a few days ago (100817). Since the Karuizawa Futuro is still in Karuizawa it now seems almost certain that the Maebashi Futuro is the one that was initially installed in Yokohama. The Karuizawa Futuro was the first of the two to be installed; one of the "extras" on the DVD that accompanies the book Futuro: Tomorrow's House from Yesterday is some very cool footage (by Polykem's Peter Stude) of its construction.

In his emails James told us that the Futuro is located:

"... near Karuizawa, on private property hidden amongst trees."

and he goes on to add that:

"(the Futuro) needs rescuing, but it's almost intractable from behind a property deep into trees ... It's a shame that it's not being taken good care of but at least it's dry and hidden from too many peeping eyes!"

James also sent us several photos (below) which clearly show a Futuro in need of a little TLC. 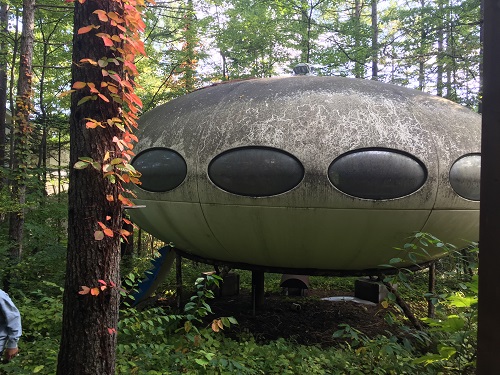 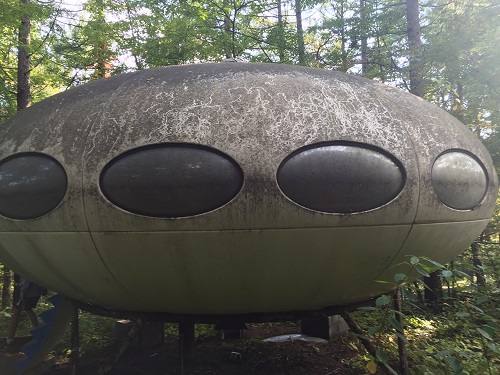 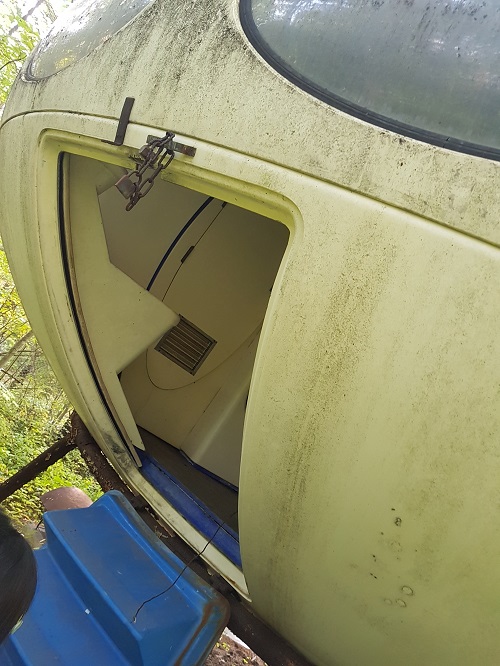 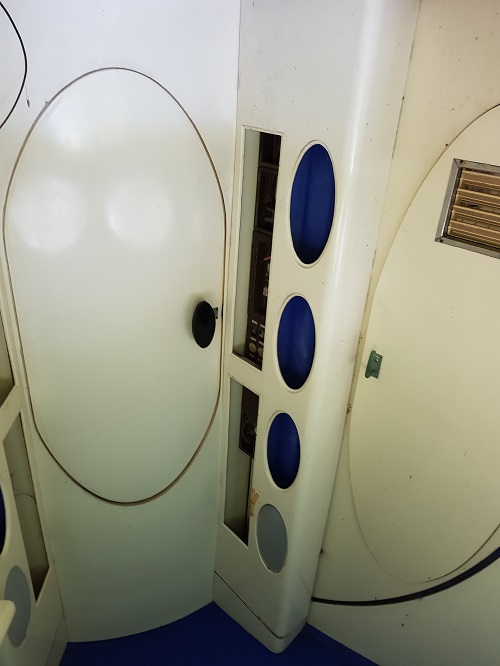 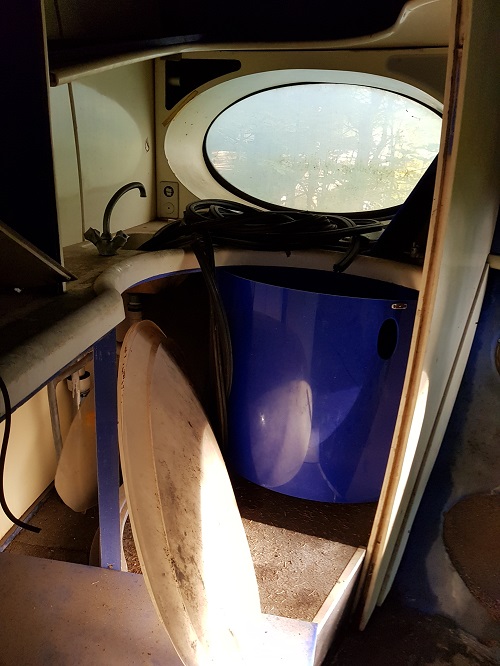 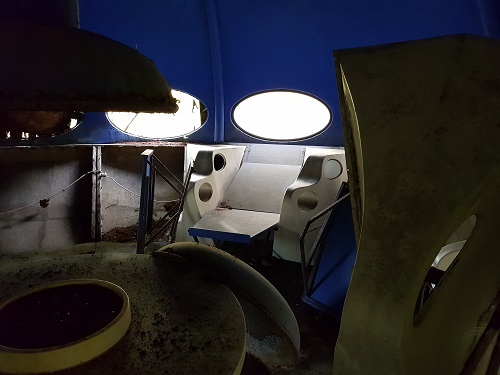 This photograph by all.that.remains taken 112220.