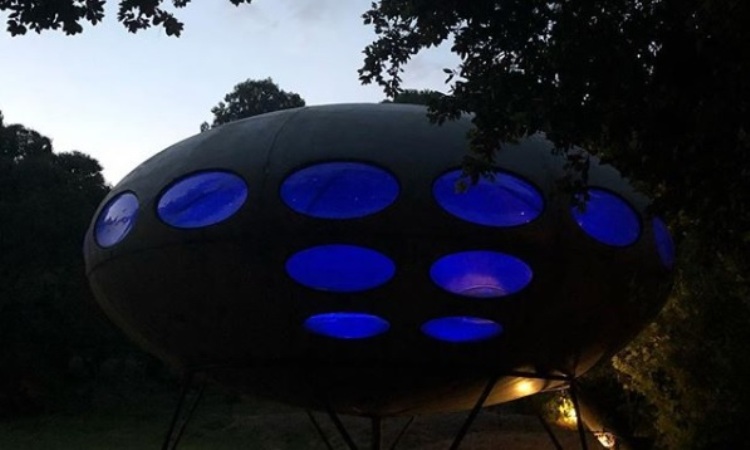 We came across this photo of this Futuro from one of its "past lives" on Instagram recently. The photo dates from 2007 when this Futuro was exhibited as part of an exhibition at the Grand Duke Jean Museum of Modern Art (known as MUDAM) in Luxembourg City, Luxembourg. The exhibition was titled "Tomorrow Now - When Design Meets Science Fiction" and it ran from 052507 to 092407.

The original of the photo, by @nientedolcee, can be found on Instagram here. 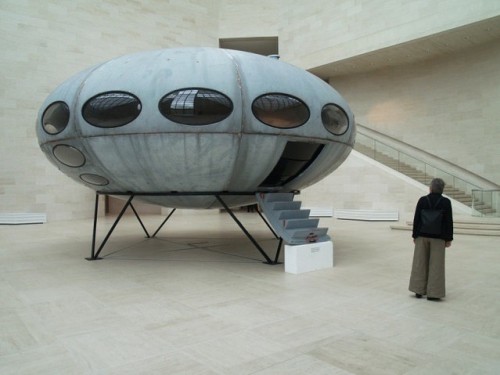 This is one of the lesser photographed Futuros and so it is always great to see new photos. Here we have two recent photos by owner Dakis Joannou. We particularly like the "twilight" shot through the trees. Thanks for sharing them Dakis! 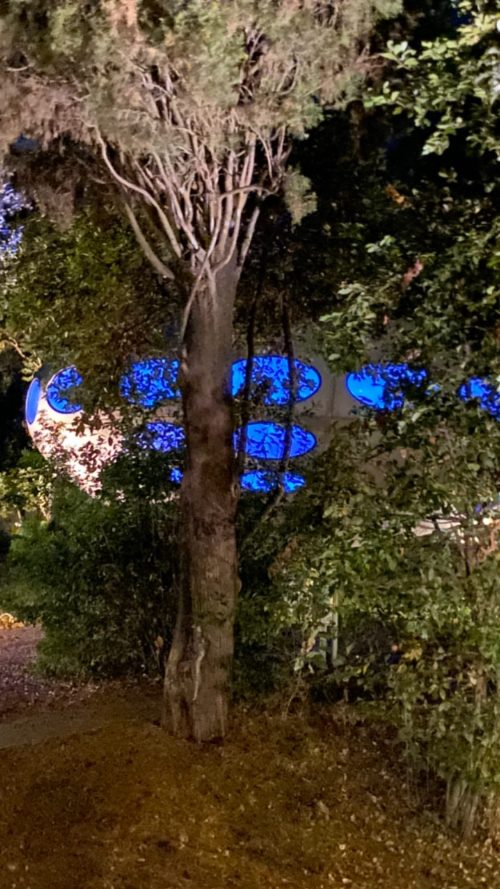 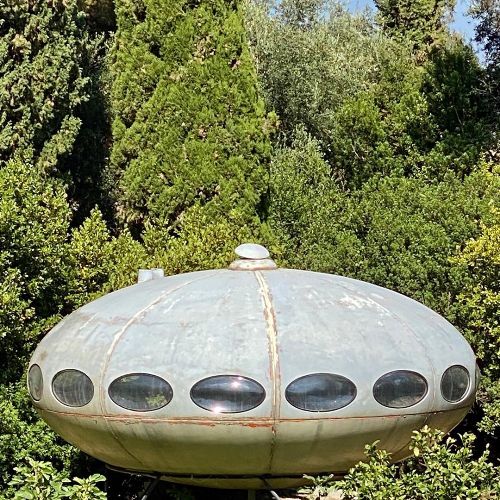 Owner Dakis Joannou sent us this photo back in March; we intended to share it at the time but it slipped our mind for a while - now here it is.

What is so cool about the photo is that it is a shot from inside the Venetian House on Dakis' estate in which we can see the "Futuro World" poster (which of course includes this Futuro) and also, through the window, the actual Futuro itself, Dakis; thanks so much for sharing this very interesting photo. 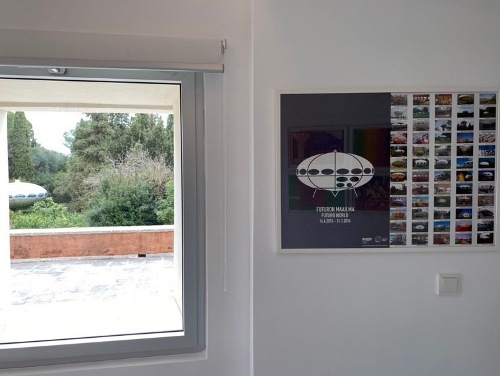 Owner Dakis Joannou recently posted these great photos of his Futuro on Instagram. We particularly like the interior shot, the first we have seen (or at least the first recall seeing), and the simplicity of the space it so clearly illustrates; we imagine it is very "peaceful". 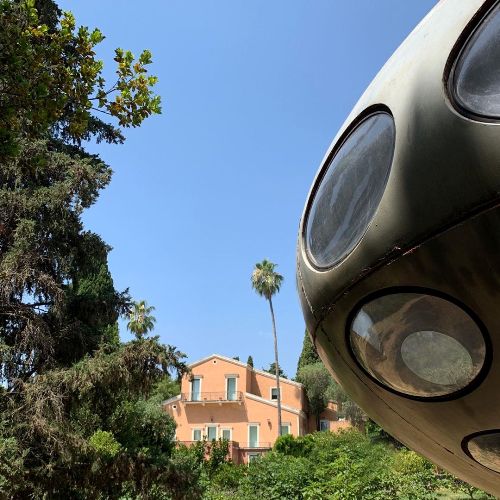 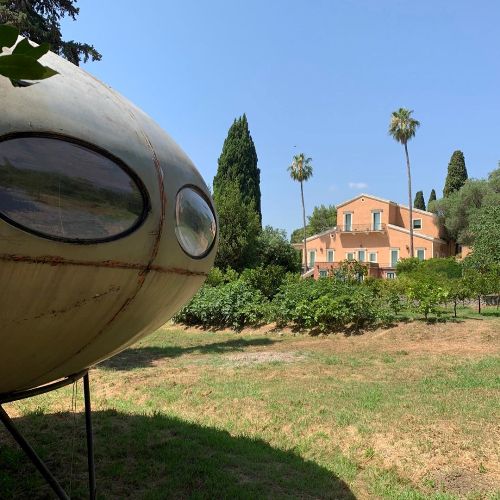 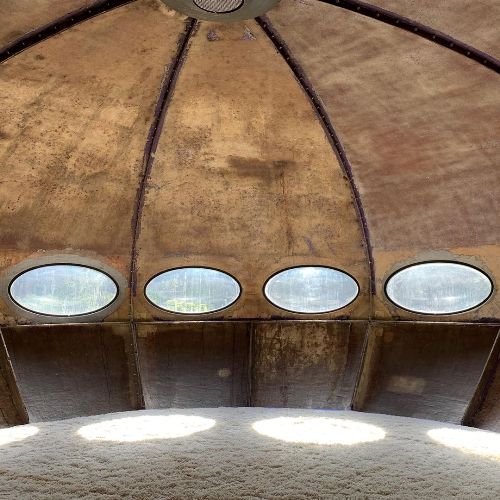 Owner Dakis Joannou recently posted this great shot of his Futuro at dusk to his Instagram account donkey301239. 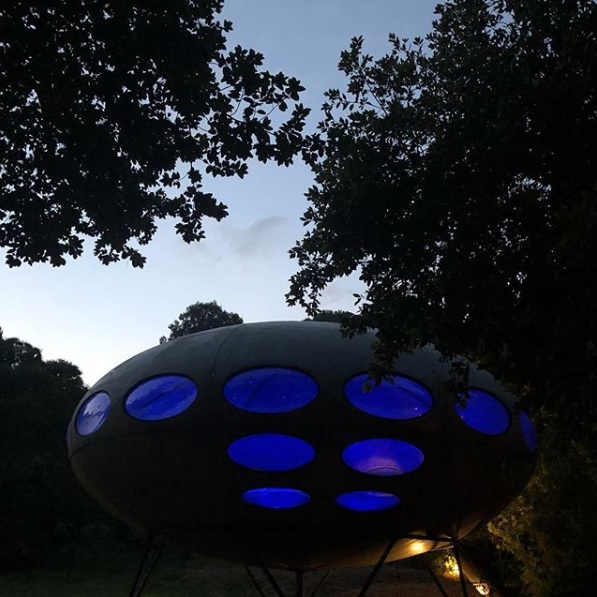 We have not seen a whole lot of photos of this Futuro but we did come across a couple of photos on Instagram recently. The first photo is by donkey301239 (aka owner Dakis Joannou) and the second is by sophiadelachouvel. The original photos can be found on Instagram here and here. 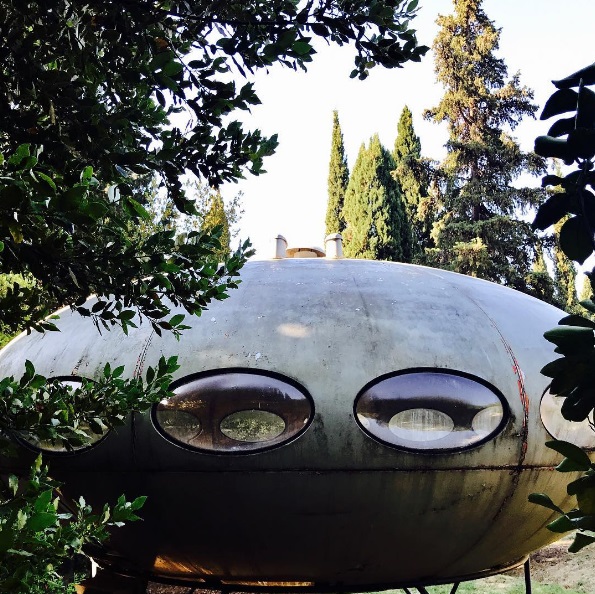 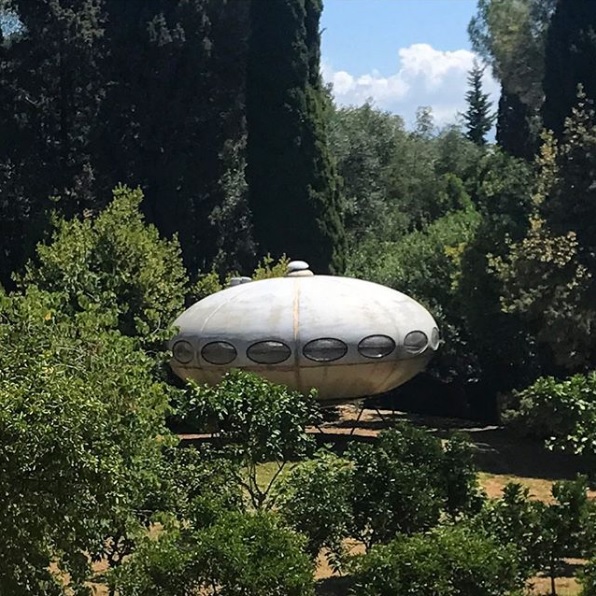 We were looking back at various photographs, emails and other items this week relating to, among other things, the history of this unit and in particular the theory that this was in fact the unit previously located at 10 Pastoor Lambertzdreef, 3150 Haacht, Belgium.

This theory had been suggested to us several times in the past and after looking over everything this past week we have concluded that the evidence does indeed suggest that this Futuro was in Belgium, then exhibited at MUDAM and then purchased by Dakis Joannou at a 2007 Christie's auction. For more detailed information see the Belgian Futuro page.

If any lingering doubt about this still remained it was eliminated when, in a recent email, owner Dakis Joannou confirmed that his Futuro was indeed purchased at the Christie's auction.

We received an email this week from Dakis Joannou in which he sent us two photos of his Limni Futuro. The photos are displayed below - thanks Dakis. 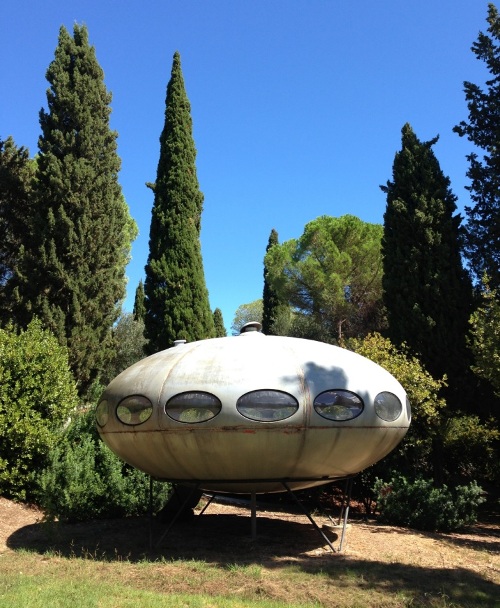 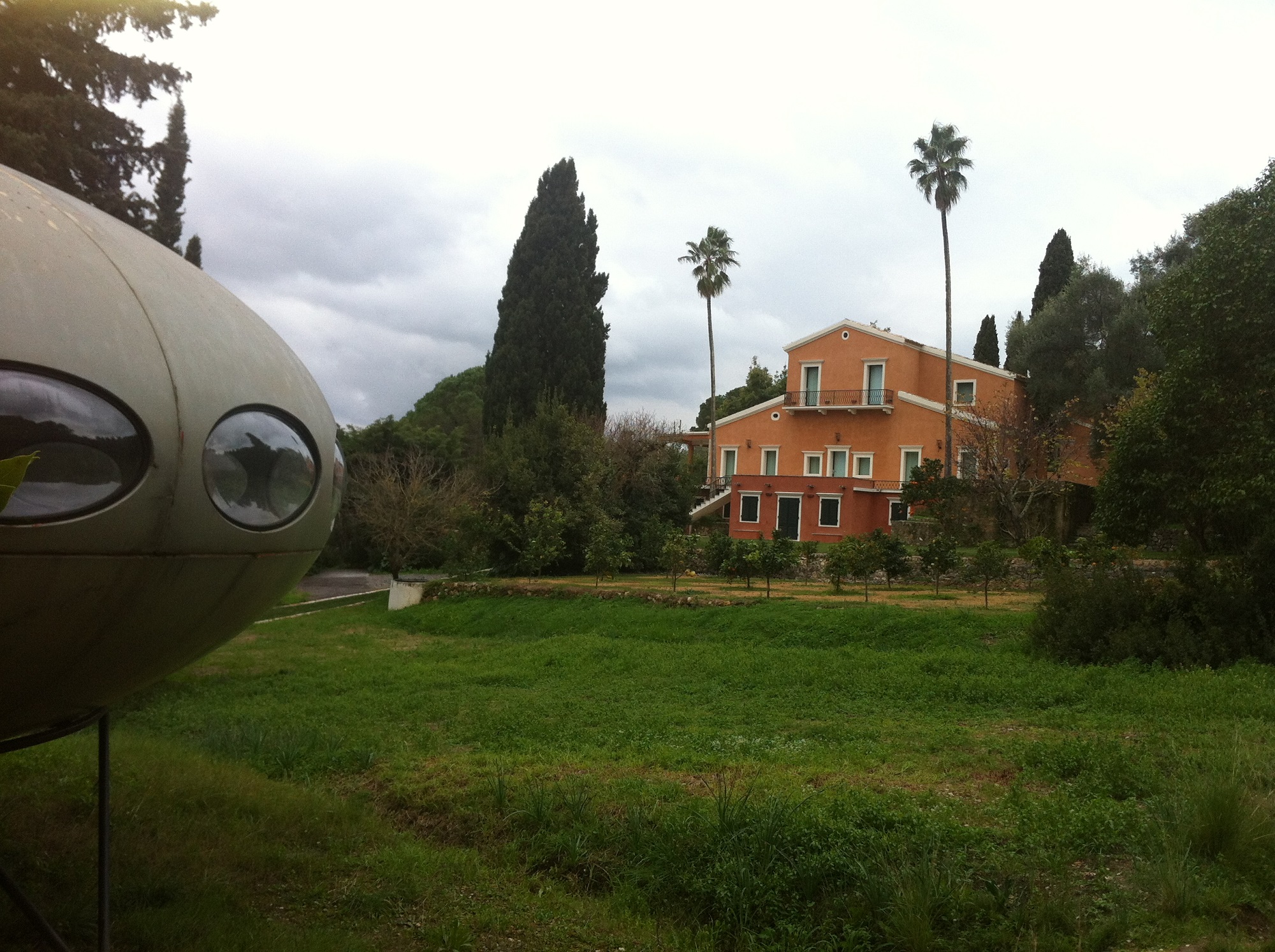 We had always been of the opinion, based on timing and various photographs we had seen, that this Futuro was in fact the one sold at a Christies auction on 112707 but we were not sure. One of the photographs we received this week from Dakis however made us certain that this was the case.

The catalogue for the Christie's auction tells us that the specific Futuro House being auctioned was the one exhibited as part of a 2007 exhibition at the Grand Duke Jean Museum of Modern Art (known as MUDAM) in Luxembourg City, Luxembourg. The exhibition was titled "Tomorrow Now - When Design Meets Science Fiction" and it ran from 052507 to 092407. Photographs of the Futuro exhibited at MUDAM compared to the Dakis Joannou photo clearly show this is the same unit; examples for comparison can be found below - note the appearance of the seams between the panels and the various streaks and blemishes on the paintwork. The first photo is of the Futuro in Limni, the second at MUDAM. 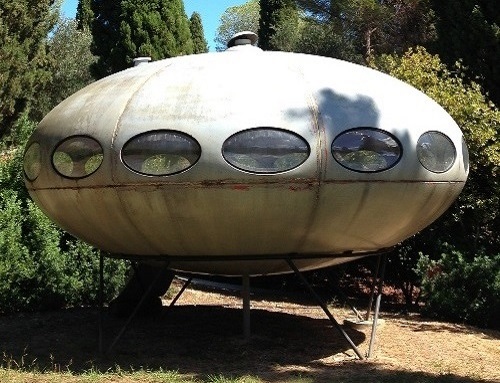 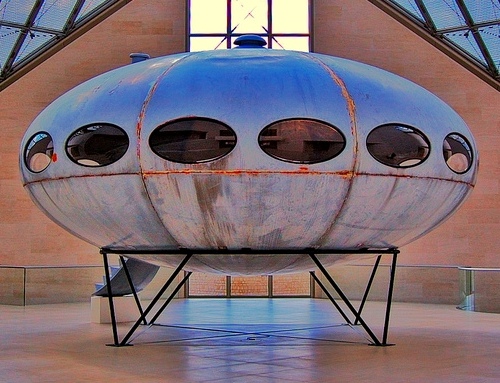 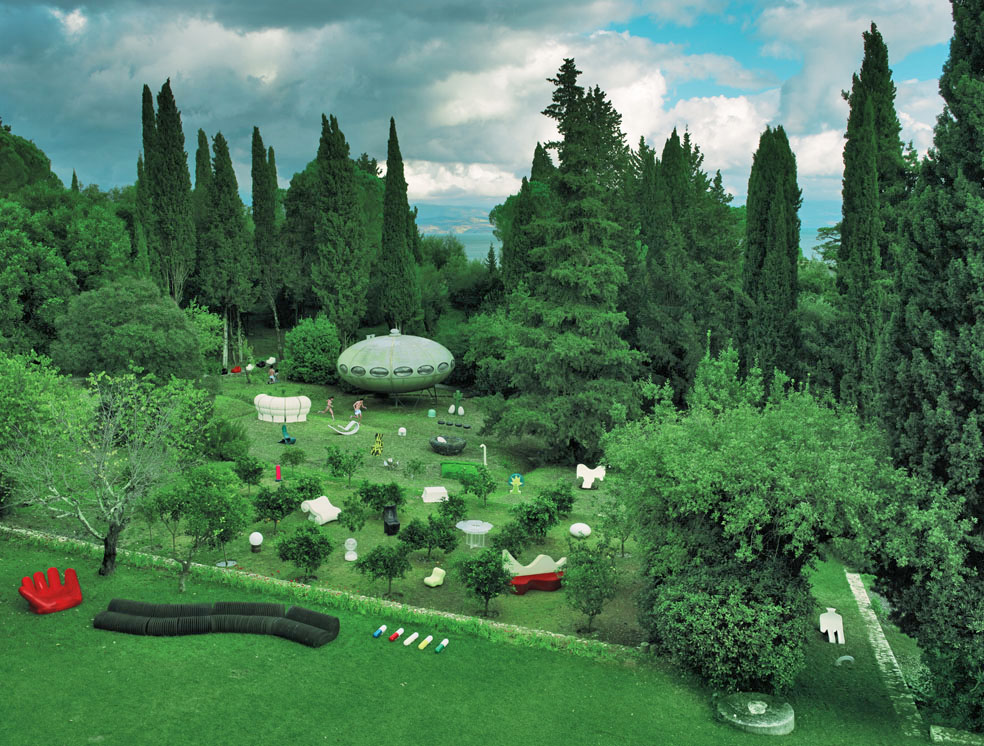 Alara's post is tagged with, among others, "dakis joannou, futuro house, corfu" and those tags were something to start the search with. A trip to Wikipedia revealed that Dakis Joannou was a Greek Cypriot industrialist and art collector. Not only that he was also one of the foremost art collector's in the world and extremely wealthy. Wikipedia has this to say about Joannou and art:

"Joannou is a major collector of European and American contemporary art and is the founder of the DESTE Foundation for Contemporary Art. He is currently serving on the councils of several museums worldwide and has continuously been on ArtReview's Power 100 List since its inception - in 2004 he was ranked its number one collector in the world."

Over the last decade or two the Futuro House has begun to be perceived as something of an art object and that fact along with what we had learned about Joannou, wealthy and a collector of art, suggested to us that it was highly possible that Joannou would indeed have a Futuro House in his art collection.

As a wealthy industrialist and major art collector Joannou has been the subject of many articles on the web and eventually we did come across one that mentioned a Futuro House; a January 2013 article on the Vogue Italy website (Italian text | Google translation to English here) which features an interview with Joannou. Text translated by Google is not always easy to follow but it seems that Joannou has assembled a collection of art and design objects focused on the year 1968 which fits well with the Futuro House being the year Matti Suuronen designed his iconic masterpiece.

So, it seemed there was likely a Futuro on the island of Corfu but where? Corfu is an island of, according to Wikipedia, some 267 square miles and from experience we know that searching Google Maps for something the size of a Futuro in an area that size would take forever. However there was one clue in an article on the website Nowness.com which indicated that Joannou's estate would be located on the coast (and check out the yacht!).

Given the size of Corfu even knowing the Futuro, if there, would be located along the coast it seemed like a search could still take a long long time but there was nothing else to narrow the search so it was time to kick up Google Maps. It was our lucky day, we picked a place on the Corfu coastline to start the search completely at random and it turned out we had picked a location only a mile from the Futuros location and we found it in just a few minutes.

The Futuro is located close to Limni, Corfu at 39°39'34.41"N 19°51'10.20"E. The imagery is not perfect and the Futuro is not visible at all in Bing Maps but it is good enough to confirm the presence of a Futuro, the size is as it should be and the shadows the object casts look correct.

The image below is a screen capture from Google Earth and shows the size of the object. The remaining art objects as seen in the photo above are gone but the landscape and surrounding area match that seen in the photo. Google Earth historical imagery indicates that the Futuro was moved onto the site sometime between 112307 and 061909. The latest imagery, which still shows the Futuro on site, is dated 082110 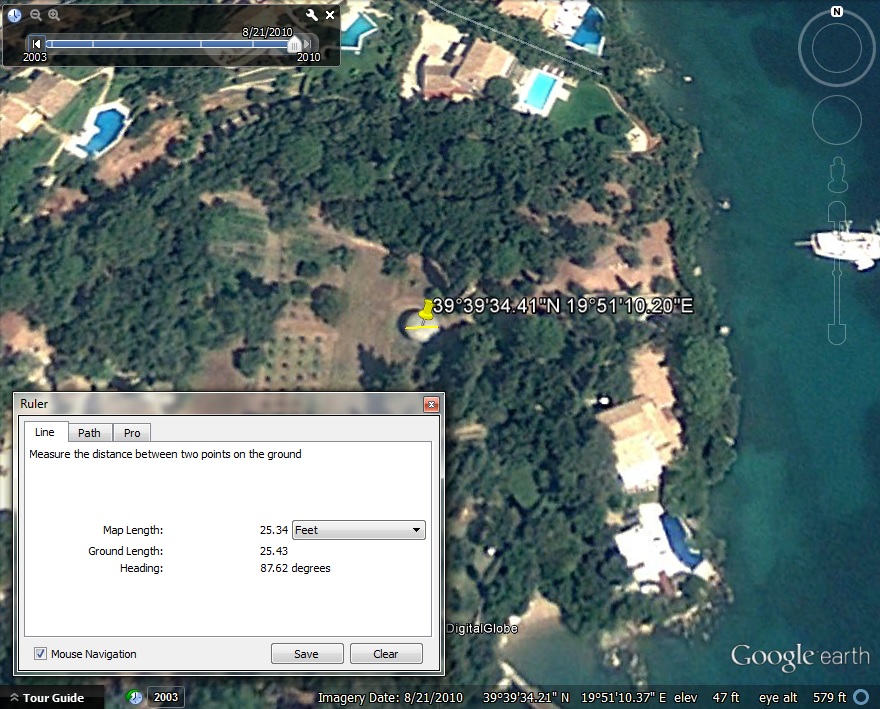 If anyone has any more information on this Futuro and in particular any photographs please let us know.

This photograph by antonisdedes taken 120722.