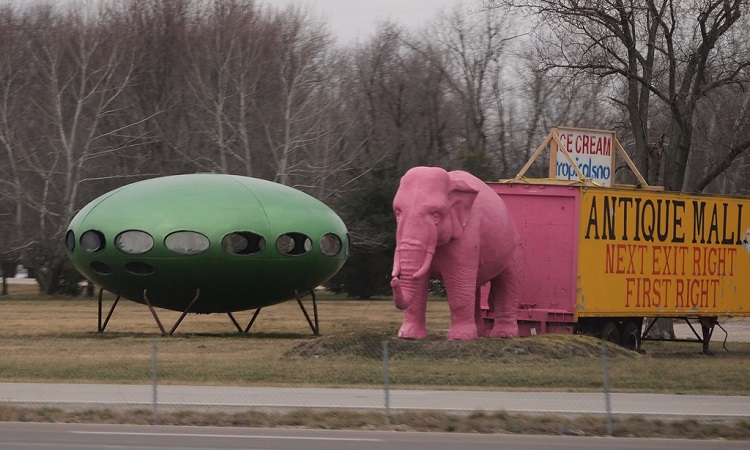 A few months ago @kimmie909798 let us know this Futuro was about to have a makeover and this past weekend Kimmie let us know that the work was now underway.

On 091721 Kimmie drove past the Futuro and was able to grab this shot of folks working on the outer surface, apparently starting to apply some kind of a primer coat or similar. It is always great to see a Futuro receiving some well deserved TLC. Kimmie - thanks for the update. 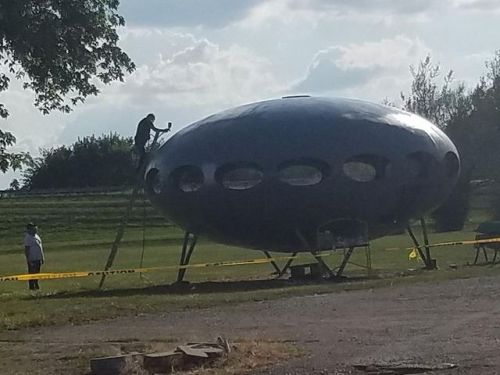 It seems this Futuro is finally going to get a makeover! We received a message via Instagram from @kimmie909798 who visited the Futuro 071321 and told us that:

"The Futuro House in Livingston Illinois is being refurbished! I stopped by when I saw couple of men working on it and they said they plan to have The Futuro completed by early this fall. They plan to rent it for parties. The Futuro will be painted silver. They also plan to have a Route 66 themed miniature golf course in the field next to the Futuro. I'm so happy someone is refurbishing it; the Futuro will remain at the same location."

We are also very happy the unit is being refurbished; we will have to make a return visit to this location after the work is completed and see the result for ourselves.

On 090620 we had the opportunity to add this Futuro to the list of those we have personally visited (brings the count to 11 or perhaps more accurately 11½ as that list includes the half unit located in Frankfurt am Main).

This unit has been pretty well photographed and so it was much as we expected; a shell with no interior fixtures and fittings showing some signs of deterioration but not in as bad a condition as some units.

Though the owner was not on site at the time we did ask the staff at the Pink Elephant if the unit was for sale. They said "not officially" and added that the owner felt it was worth around $60-70K; the implication was that perhaps it would be for sale if someone offered something north of those numbers.

The photos below are some of those we took during our visit; most are just shots showing the exterior and interior and the general condition though the last three are perhaps worth commenting on: 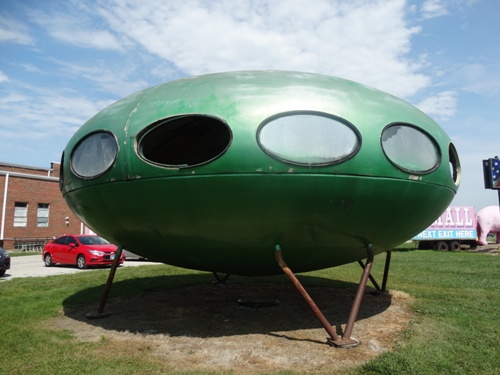 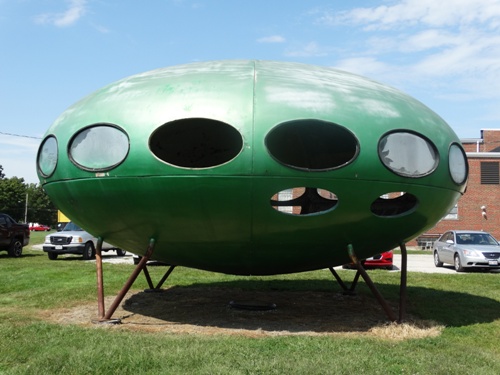 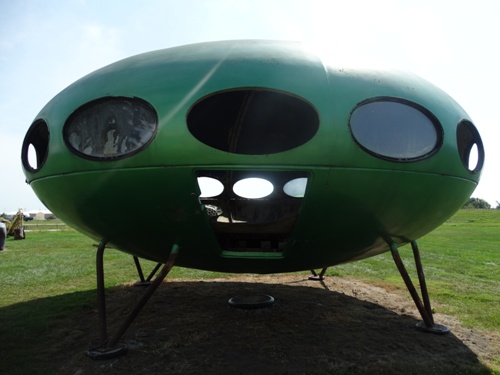 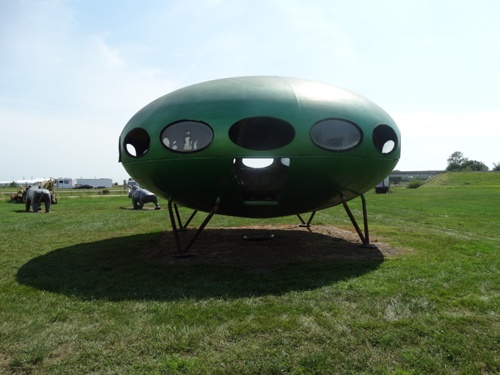 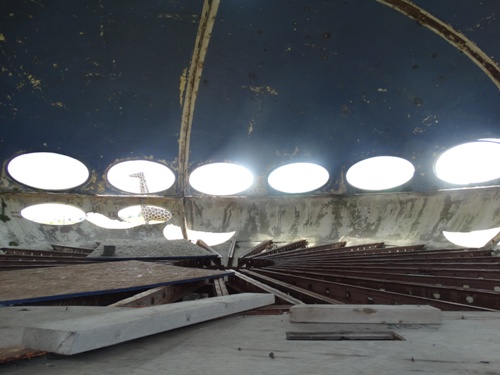 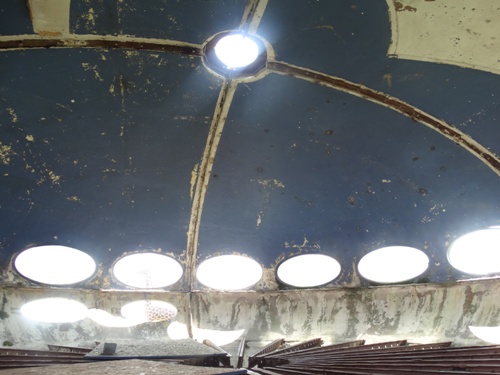 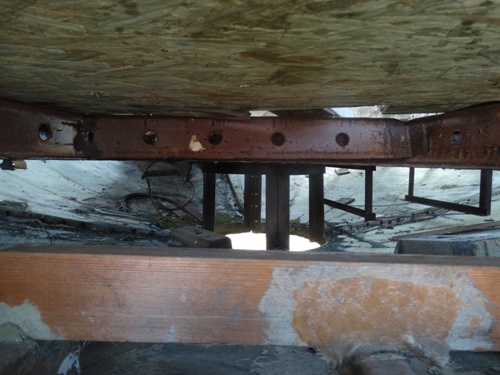 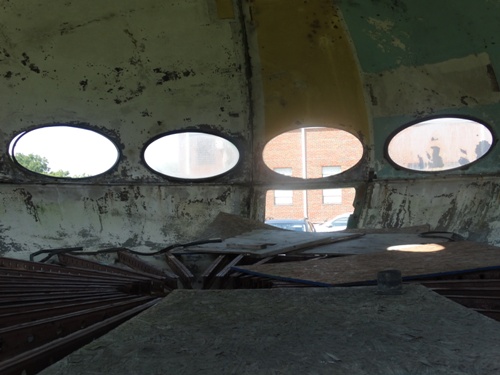 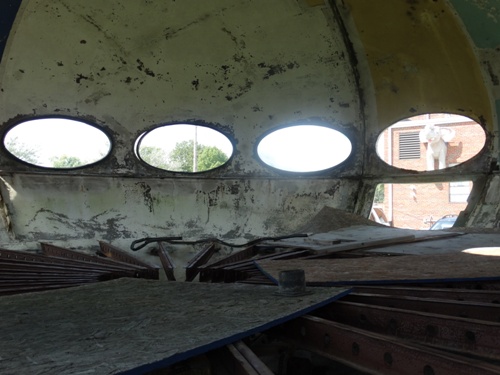 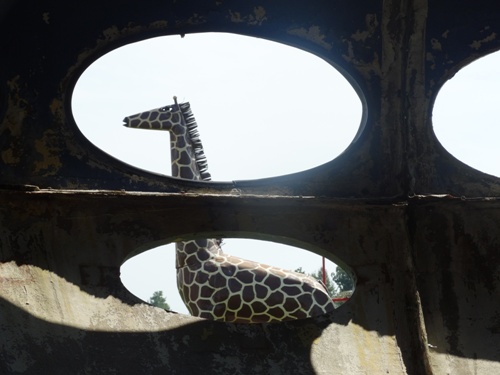 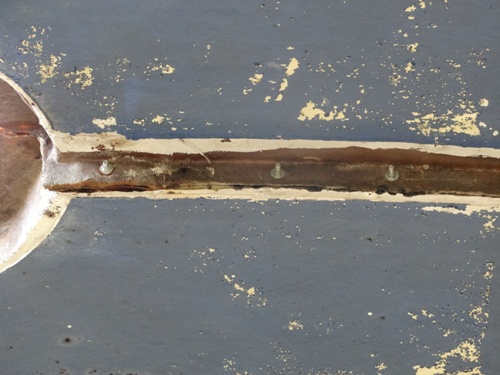 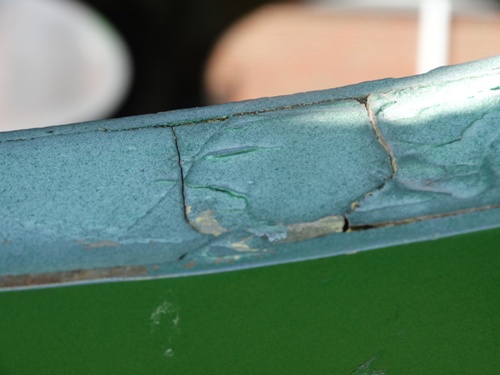 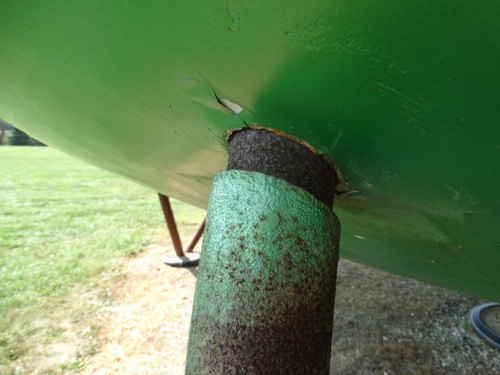 This awesome drawing featuring this Futuro is by talented artist Rex Parker. We enjoyed it so much we had to own it; a 13" x 19" print is now a part of our collection of "Things Futuro". You can get your own copy by visiting Rex's online store here. 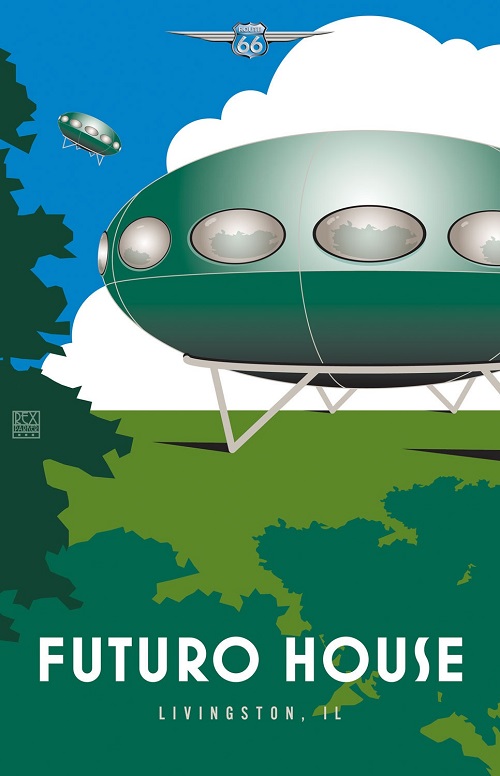 Came across this photo of this Futuro the other day. The photo was posted by beautyofabandonedplaces on Tumblr.

The photo interested us not only because it is a rather "moody" shot of a Futuro but also because the rear windows seen through the front window to the left of the photo ends up looking like the "alien eyes" seen in many graphics; take a look at this photo of Frisco to see what we mean.

Wampa-One captured a couple of nice shots of this Futuro showing it as it was 032213. One of the photos is a very cool close up of the Futuro and the Pink Elephant. The photos are displayed here with permission. 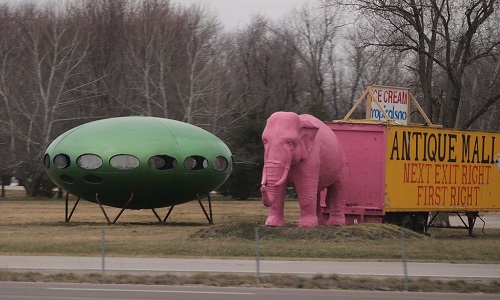 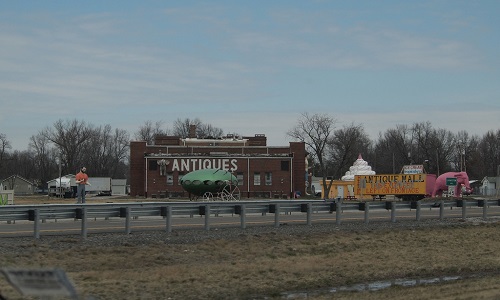 We came across this very nice set of photos of this Futuro by singer/songwriter Citizen Fitz posted on his blog 082611. 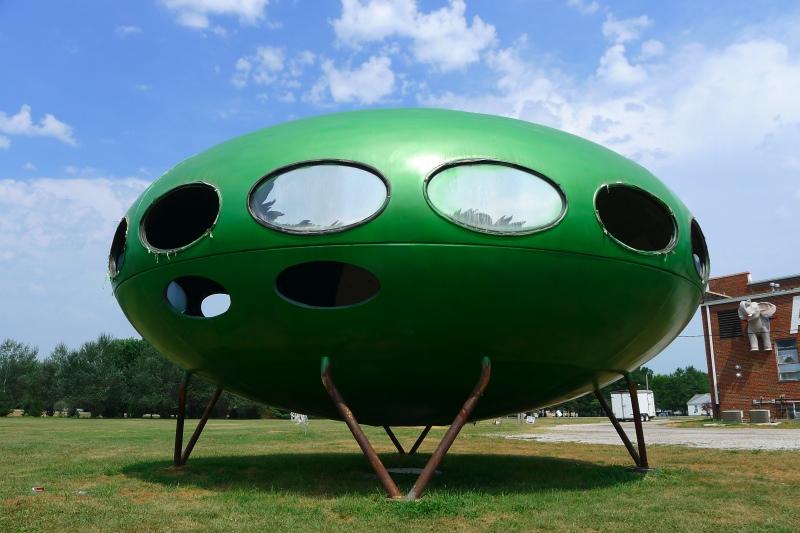 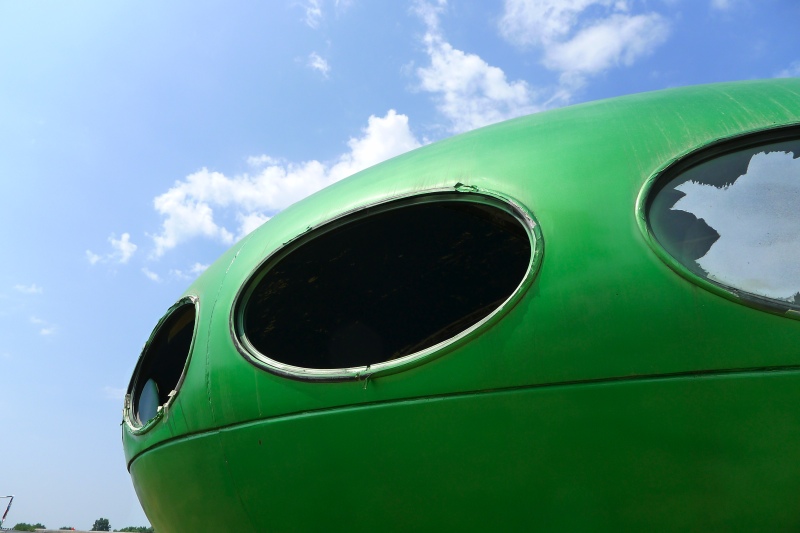 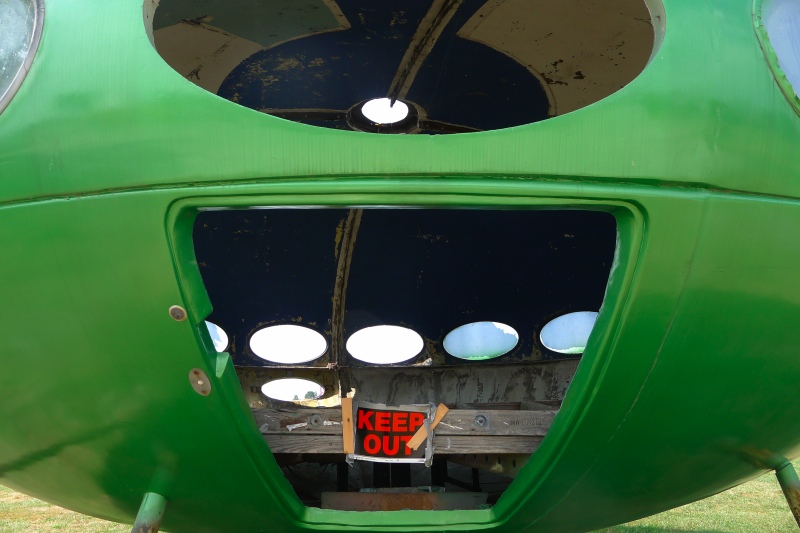 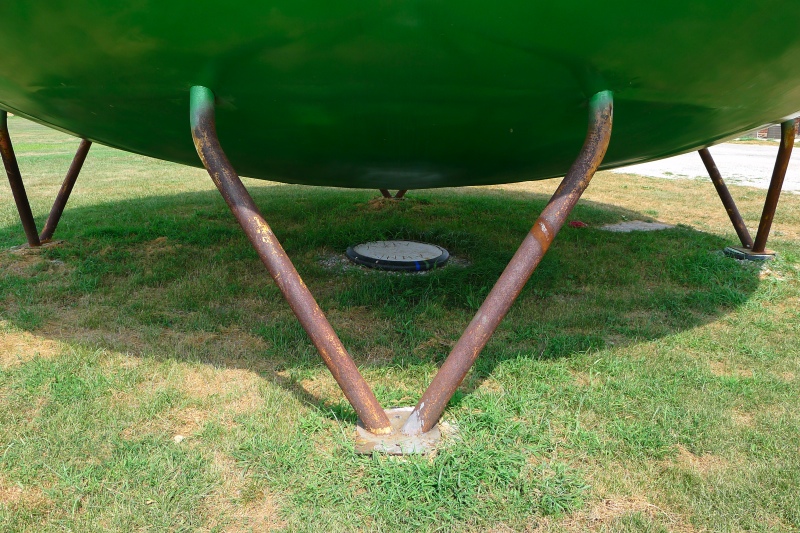 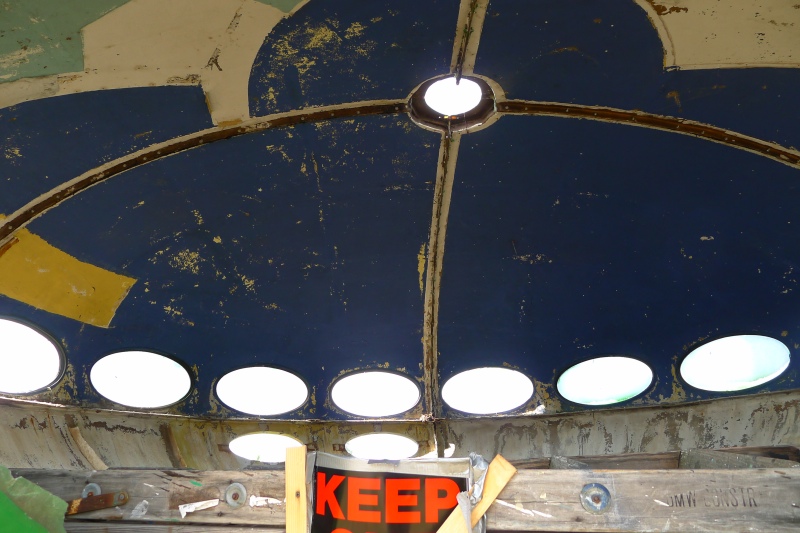 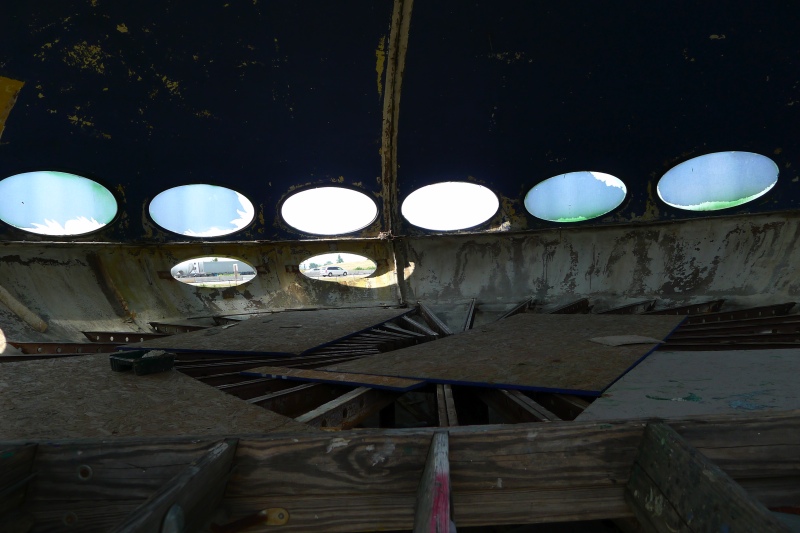 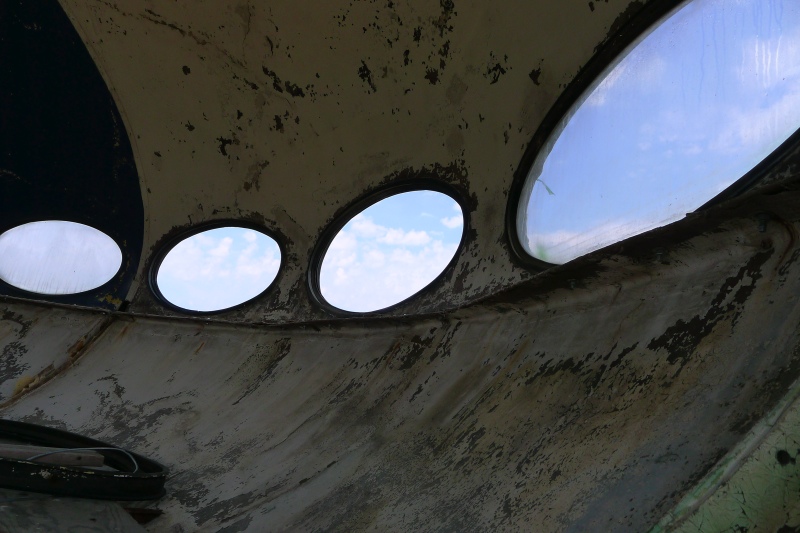 We know the Futuro is somewhat rare; Pink Elephants - probably more so. Around the same time we came across the photos above we happened on this fun shot by the_mel. Taken 020711 the shot is an interesting capture that shows the Livingston Futuro along with the antique mall's "Pink Elephant". Also notable is that it was taken before the Futuro got the new coat of paint reflected in the photos above. 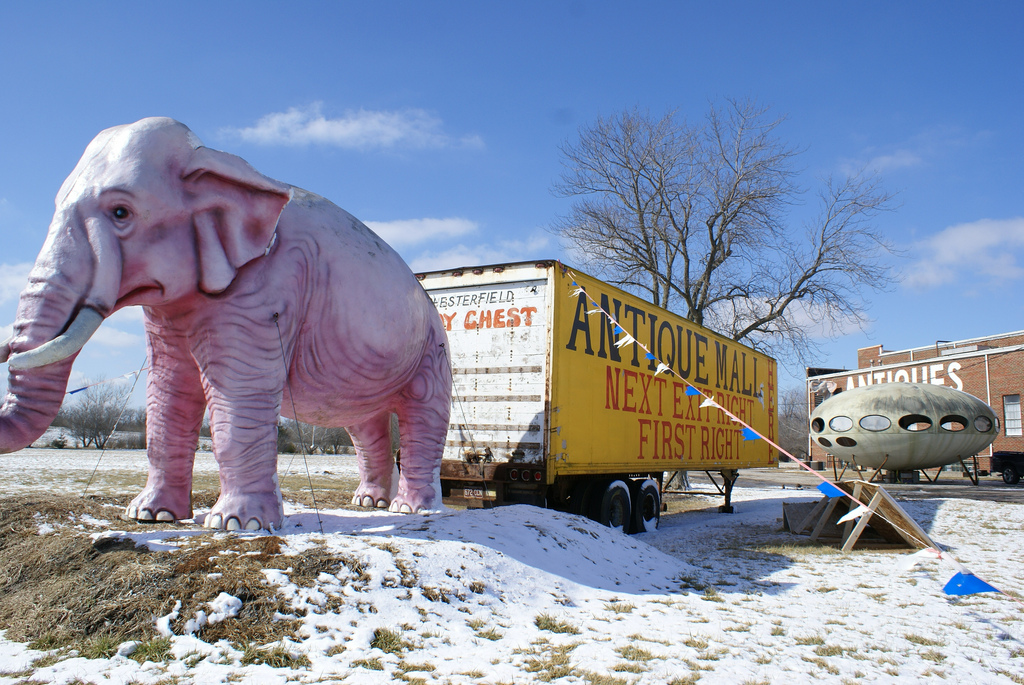 Traditionally the proverbial "they" have mostly referred to aliens as "little green men". Clearly that is not the case; they have fur, four legs and a tail. We always figured that there was more to dogs than met the eye, they are too darn clever - perhaps all the time we spend training them is just a con and it is really them training us using reverse psychology.

Seriously though this photo by Debra Jane Seltzer of her "kids" at the Livingston Futuro is a great shot.

Debra runs the website RoadsideArchitecture.com which is a treasure trove of images from all across the USA - check it out. Debra also blogs about her experiences on the road trips she takes to collect her photographs; this photo is from one of her blog posts here.

The photograph was taken 050312 and that is now the latest "confirmed" date we have for this Futuro. 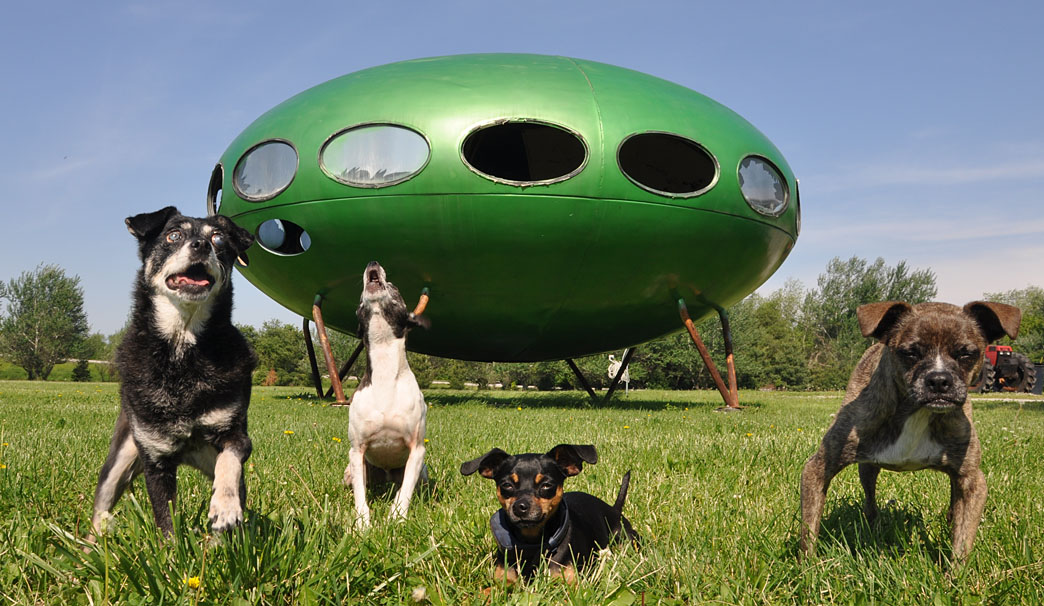 Sitting on the north side of I-55 in Livingston, IL you will find the The Pink Elephant Antique Mall. The mall is home to several larger than life curiosities including its namesake, a huge pink elephant as well a twenty foot tall swimmer and a giant "Twistee Treat" ice cream cone building.

This Futuro was previously located off Route 29 north of Springfield Airport before being purchased from Frank Moscardelli, on whose land it had sat for many years, by the owner of the Pink Elephant Dave Hammond. The Futuro was in quite a state at the time of purchase; in an article in The State Journal Register (012310) Hammond is quoted as follows:

"It was disgusting on the inside, really disgusting ... We had to gut it. It took four trucks to haul all the parts. It does need a lot of attention. We intend on fixing it back up and making it into a dining area with booths, where people can sit and eat ice cream."

That plan will clearly take a considerable amount of restoration work but the May 2011 photo from Alan C linked below clearly shows that the work is underway with the Futuro having received a shiny new coat of paint.

The second of the two images linked below by olrebbie is an interesting detail shot showing a doorbell installed on the Futuro. Not sure if this is something added to this unit or something standard as it is not something we have ever noticed before; it will be interesting to check images of other Futuros to see if we can ascertain whether this is a standard feature when time permits.

The video below is by RamblinAround; the Futuro pops up around 1:22 into the footage. The two photos below are by vantasy and Pete Zarria respectively and are displayed under CC 2.0 license. Additional photos can be found following the links listed below. 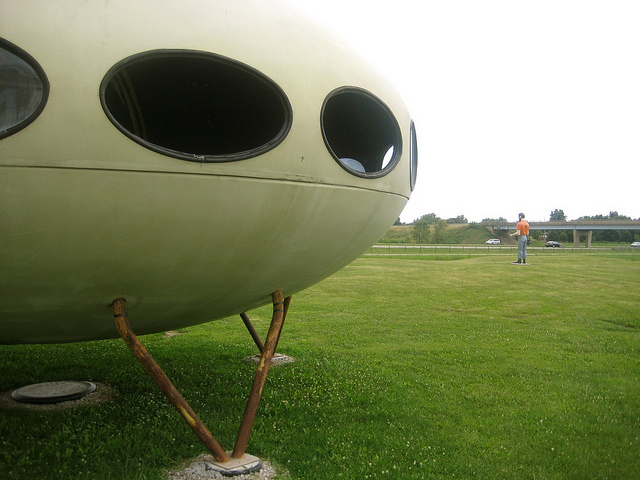 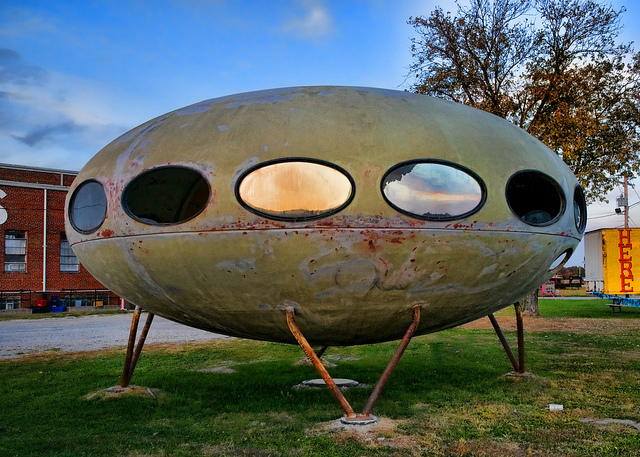