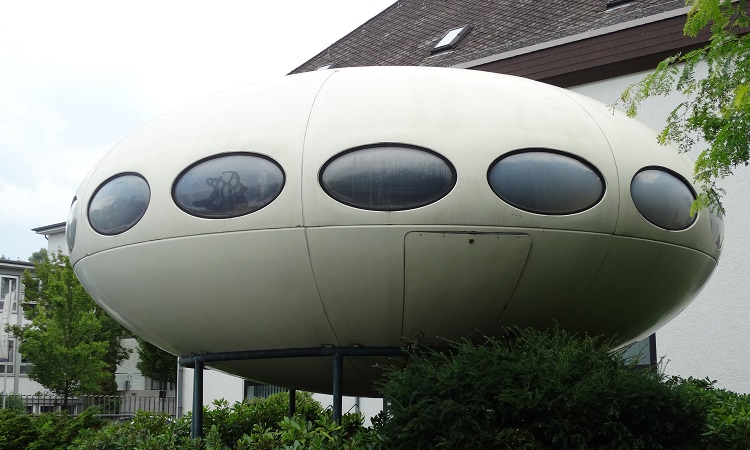 Werner Klämke kindly sent us the three photos below recently. The first two, taken 040520, give us a great recent look at this Futuro and the third is an interesting photo showing the Futuro illuminated on the occasion of a company party 120711. Thanks for sharing them Werner.

Coincidences are interesting occurences. Yesterday we made the first update to this page since 2016 when we added a recent photo of this Futuro. One day later Thomas Lahr posted this 1991 photo to Instagram. What is so very interesting about this photo is that it is the first (and only) photograph we have seen where the "half" Futuro (later donated by Expotechnik and relocated to Frankfurt am Main) is still on the Expotechnik campus. Very cool photo! Thanks for sharing it Thomas! 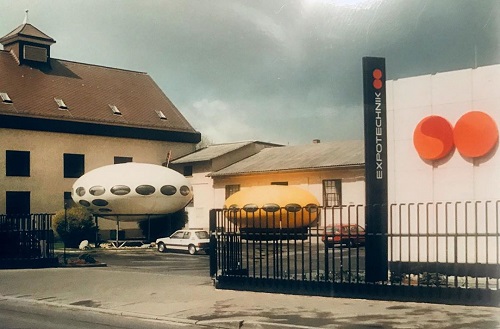 Its been a while since we saw a new photo of this Futuro but today runaroundtheworldin20days sent us this one showing how this unit currently looks (pretty much unchanged since we visited it in 2016). 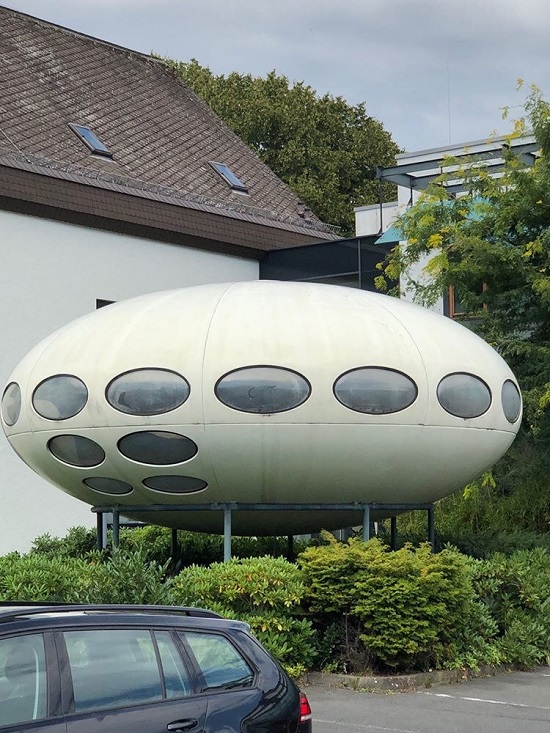 In July of 2016 we were fortunate enough to be able to take a vacation to Europe. Our primary destinations were England and Switzerland but we were able to squeeze in a quick road trip through Germany to visit this Futuro along with those in Haigerloch and Niedernhausen as well as the half Futuro in Frankfurt.

During our visit to Taunusstein Simone Jungen and Benjamin Bothun of Expotechnik took time out of their busy day to visit with us and tell us a little about the Futuro (the three of us can be seen in the "obligatory tourist" photo above left); thanks for your time and information guys! The visit also rated a mention on the Expotechnik Facebook page (the photo there includes my wonderful wife who puts up with my Futuro "nerdiness").

Expotechnik's involvement with Futuro goes back to 1970 but our previous speculation that Expotechnik may have been involved in the manufacturing of Futuros was inaccurate as was our assumption that their Futuro had been manufactured under license in Germany.

In fact Heinz H. Soschinski, Expotechnik's founder, had visited with Polykem in Finland and negotiated the purchase of two Futuros that were in fact manufactured in Finland and then imported into Germany. The units were then used in the exhibition stand Expotechnik created for Diehl Data Systems for the 1970 CeBIT event in Hanover, Germany.

This installation was received enthusiastically and is seen by Expotechnik as having laid the foundation for the growth and long term success of the company. The continued presence of one of the two Futuros at Expotechnik's group headquarters marks and commemorates this "milestone" for the organization and recognizes the central role the Futuro House had in making Expotechnik what it is today.

The second Futuro was a yellow unit half of which can now be found in Frankfurt. The folks we met with at Expotechnik did not know what had happened to the other half but agreed to try to find out for us. Hopefully more news on that in the future.

Expotechnik proudly display a scale model of the CeBIT display stand at their headquarters and several renderings of this model along with some photos can be found below as can a photo of the actual CeBIT installation and several photos of the Futuro taken during our visit. Our thanks to Simone and Benjamin for sharing some of these items.

The Futuro on the Expotechnik campus is currently sealed and no one can go inside due to local authorities deeming it unsafe. Expotechnik hopes to restore the Futuro at some point though currently there are no formal plans to do so.

The "nugget" of information regarding the origin of these Futuros was probably the most interesting thing to come out of our visit to Taunusstein. The "Finnish 20", as we like to call them, are the original 20 Futuros manufactured by Polykem in Finland. The list is based on a "CV" put together from memory in the 1980's by Matti Suuronen. We have "taken liberties" with this list and run through several "hypothetical" versions based on various pieces of information and learning that these two German units were manufactured in Finland has prompted us to come up with yet another version of the "Finnish 20".

This set of photos was taken 072616 during our visit to Taunusstein; the condition of the Futuro appears to be largely unchanged from that seen in earlier photographs. 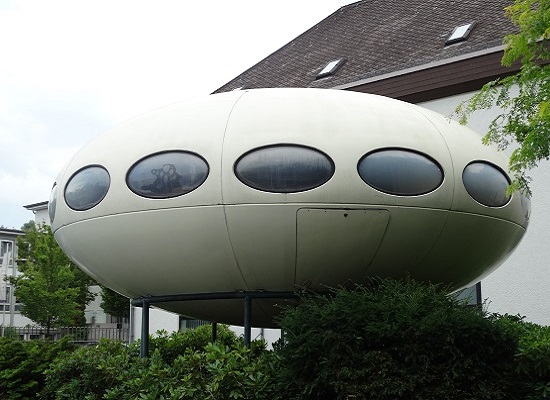 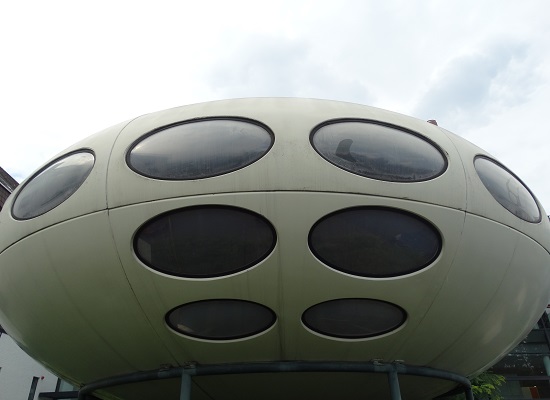 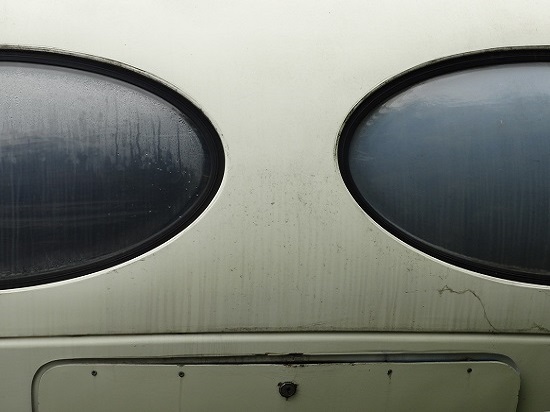 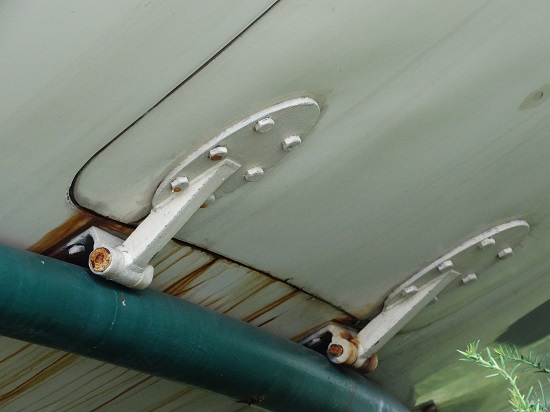 These next two photos show the model of the exhibition stand Expotechnik created for Diehl Data Systems for the 1970 CeBIT event in Hanover, Germany. 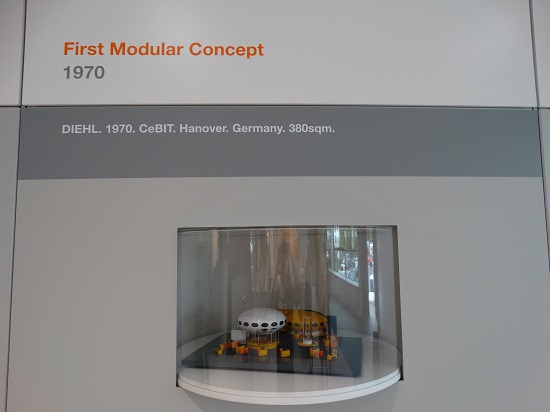 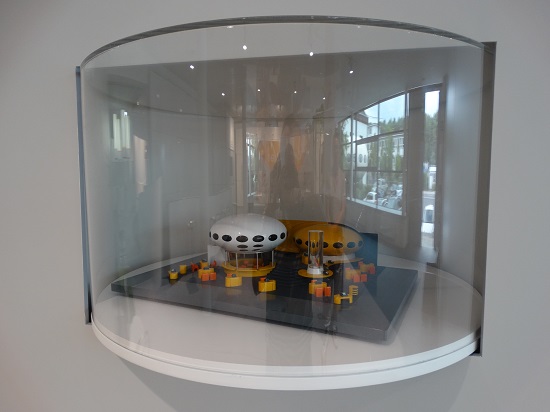 This final set of photos includes several several renderings of the model of the display stand folowed by a photo of the Diehl Data Systems display at the 1970 CeBIT Exhibition. These photos were shared with us by Expotechnik and are shown here with the company's permission. 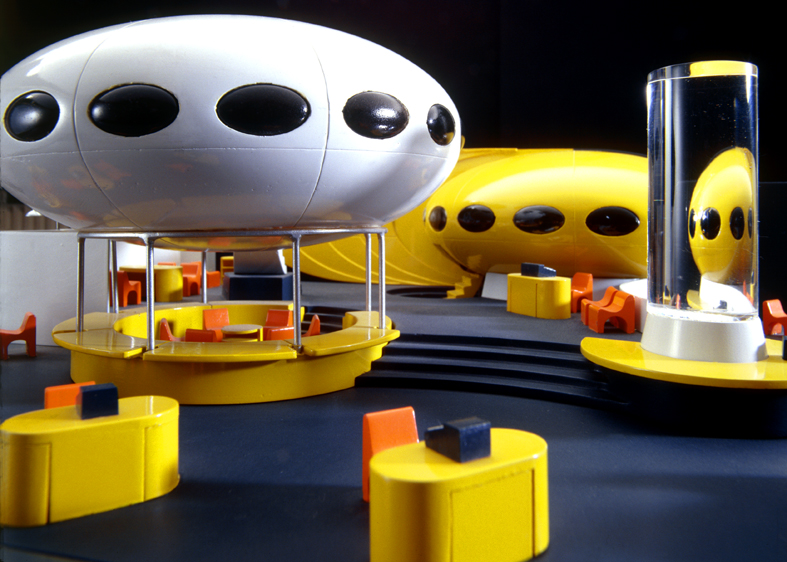 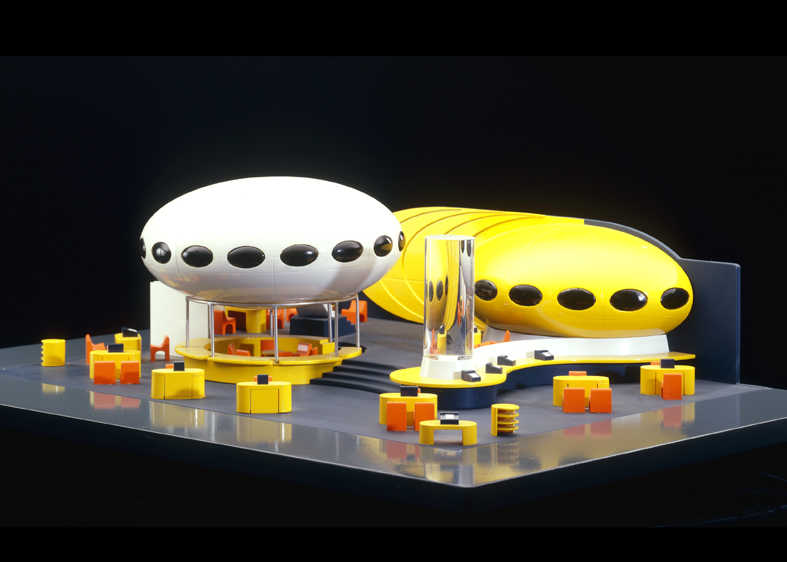 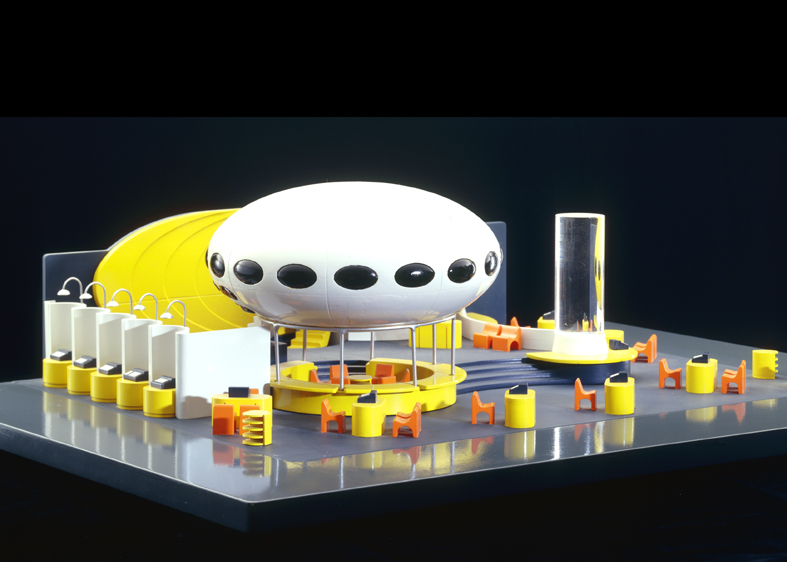 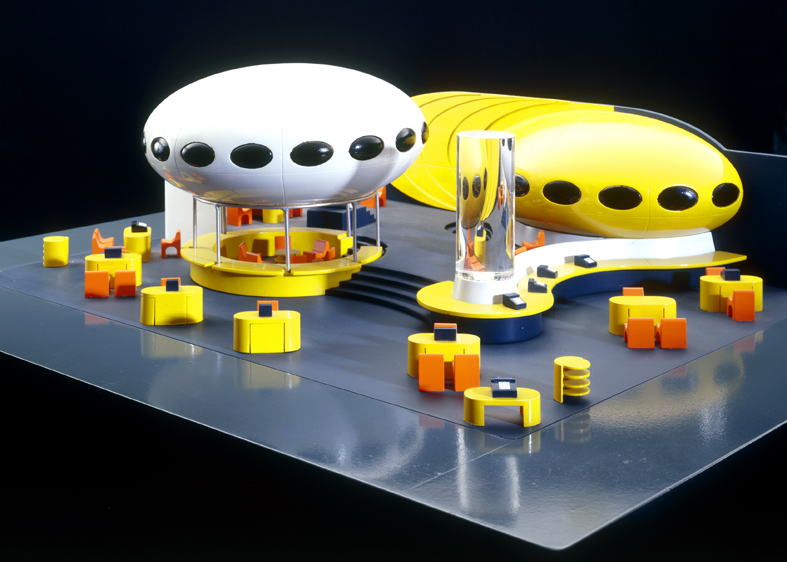 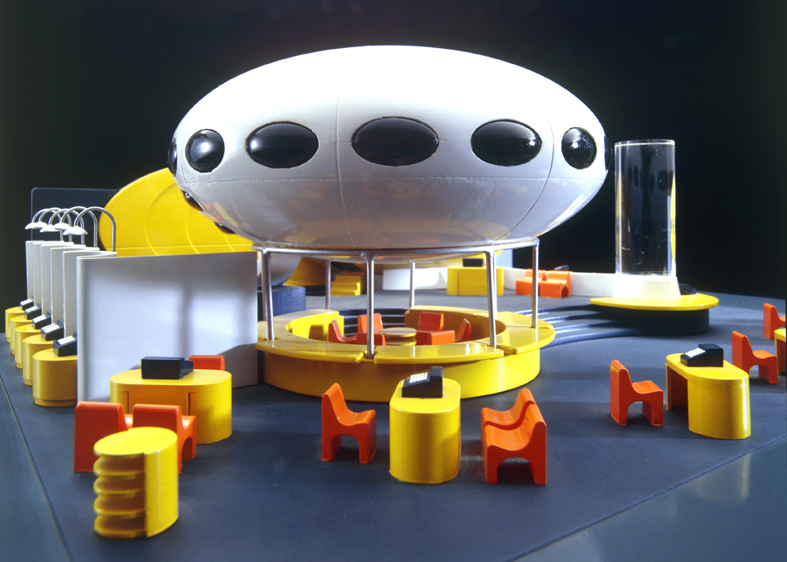 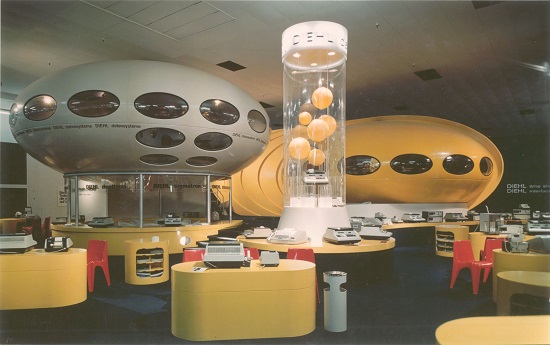 Yves Buysse aka futurohouse has shared many photos and other items on these pages and it looks to us like he recently took a "Futuro Roadtrip" visiting this Futuro and those in Niedernhausen and Haigerloch on 031316.

This photo shows this Futuro as it appeared on 031316. Yves; I hope you don't mind me sharing this photo here. 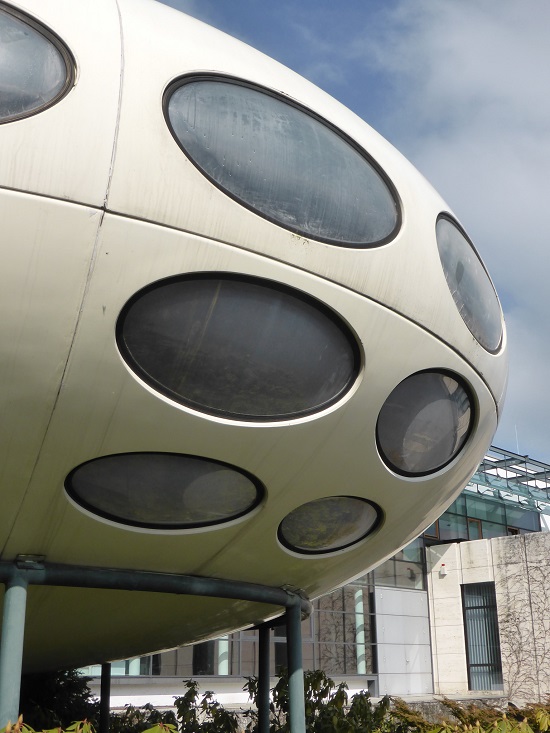 We were looking through old emails we had received to see if we had missed any information and of course we had. One referred us to this document (German - English version here); a press release on company history from Expotechnik Holding GmbH & Co. KG.

The document recounts some details of an exhibition presentation created for Diehl to be displayed at the 1970 CeBIT expo held each year on the world's largest fairground, the Hanover Fairground in Hanover, Germany. No mention is made of the word "Futuro"; instead the document refers to "UFO's" and describes the presentation as one of the most unique of its time centered around an unusual, futuristic design with UFO's as the featured element. One of the "UFO's" is the Futuro that to this day remains on the companies campus in Taunusstein. The "half" Futuro in Frankfurt am Main was donated by Expotechnik.

It is unclear if there were other Futuro's; and though it is difficult to tell for certain looking at this image of the display it looks like to the right of the image are Futuro sections that have not been fully assembled and that there may well be more sections that a single Futuro's worth. Purely speculation but perhaps the company subsequently manufactured or distributed Futuro's. It is also worth noting that as well as the Futuro on the Expotechnik campus and the "half" Futuro in Frankfurt am Main there is also another very close by in Niedernhausen and so it is perhaps possible that one too came from Expotechnik.

On another note we recently received this nice set of photos of this Futuro taken 072812 by Achim Breiling aka "futurohunter; thanks for sharing them Achim. 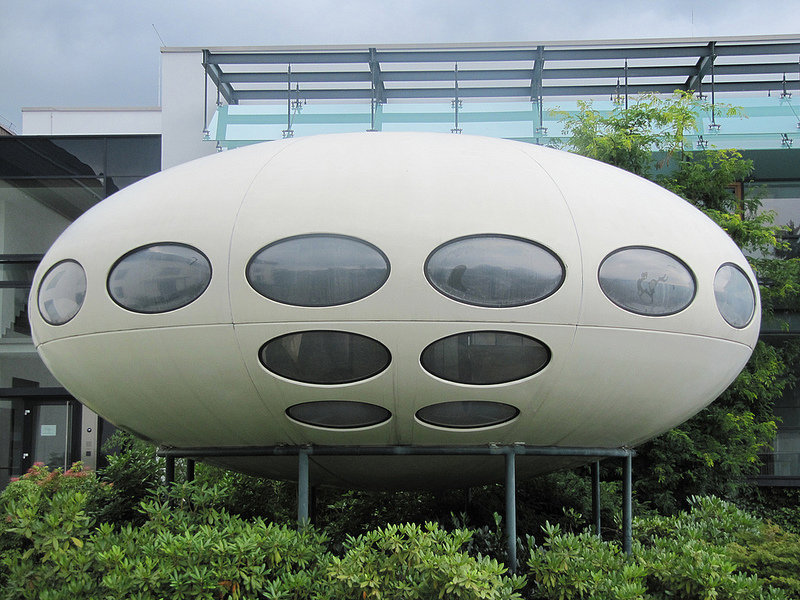 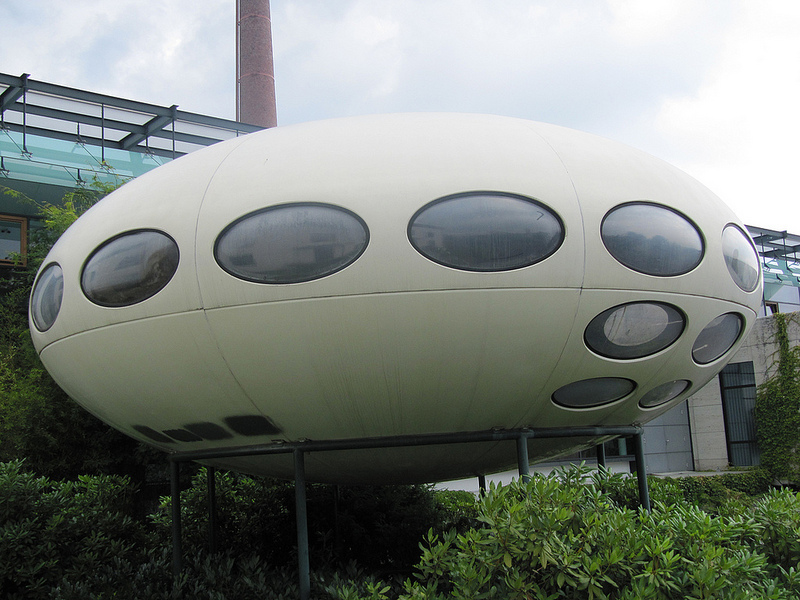 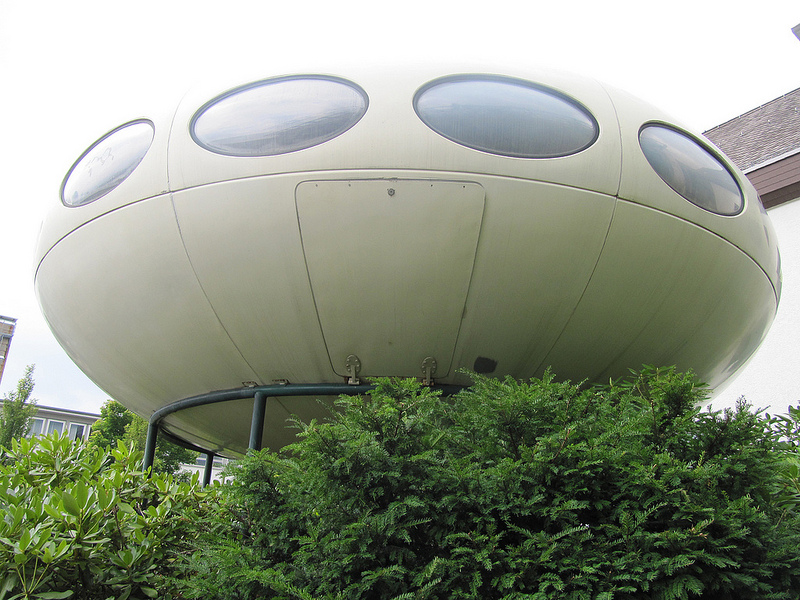 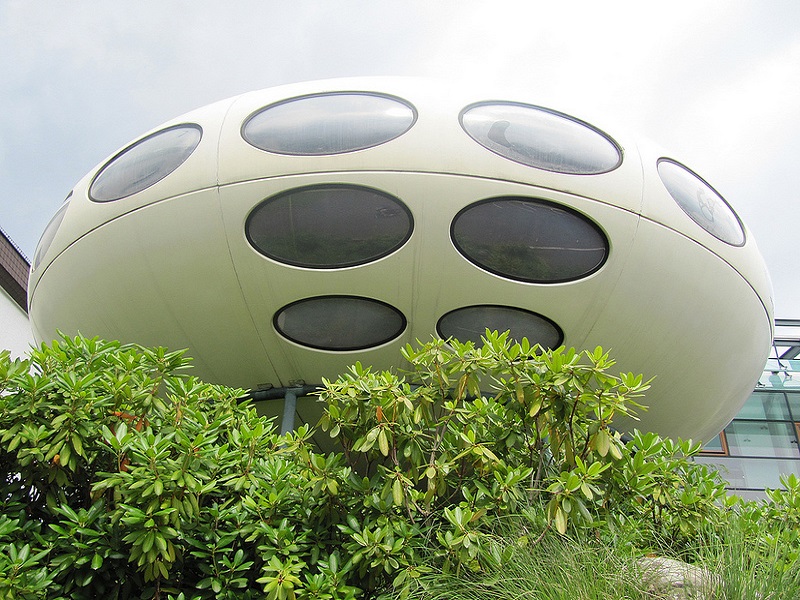 Our best guess is that this Futuro has been located on the property of the German company Expotechnik Holding GmbH & Co. KG in Taunusstein, Germany for quite some time. Several web searches have not revealed any information about the Futuro but a look through some of the pages on the Company website suggests the Company has likely had something to do with the Futuro since the late 60's/early 70's; the manufacturing era for the Futuro.

The only photo we have come across to date is this photo of the Expotechnik campus from the companty website that includes the Futuro. 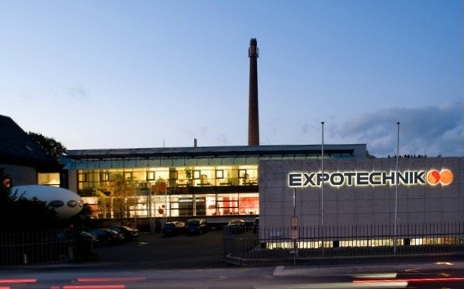