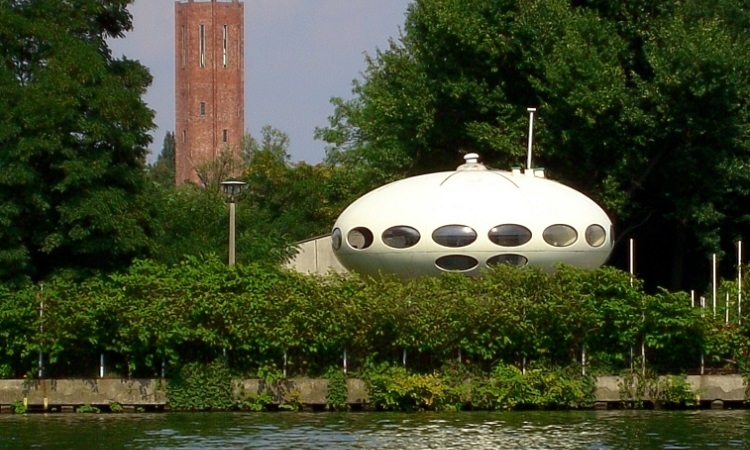 For the most part when we see photos of Futuros that is all we see, "photos of Futuros" (which of course we do love to see), but every now and again we come across a photo that is not only "a photo of a Futuro" but a really great or unusual or interesting photo in its own right. Here we have a photo of the Berlin Futuro from owner Cora that fits the bill of being "more". The photo has an almost surreal and mysterious feel to it; just a great photo! 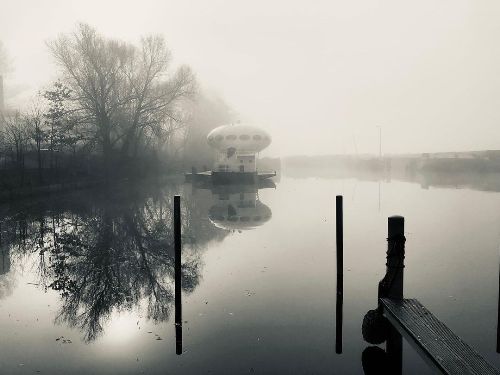 This video footage posted to Instagram by owner Cora 012122 gives us a great look at the interior of this Futuro; Cora thanks for sharing !

This Futuro has been "on the road" (or more accurately "on the water") for quite some time but recent Facebook posts by owner Cora tell us that the last leg of the journey is underway; we can't wait to see the unit at its final destination.

The first post was accompanied by a couple of photos. Though our primary interest is of course the Futuro the rather odd small structure in the foreground of the first is interesting, it looks rather like a scale model of some kind of structure to us. The second is a look inside the Futuro and, as with all interior shots of this Futuro, it reminds us how awesome the restoration of this Futuro was. 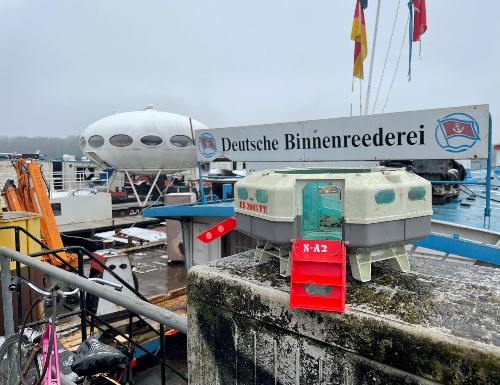 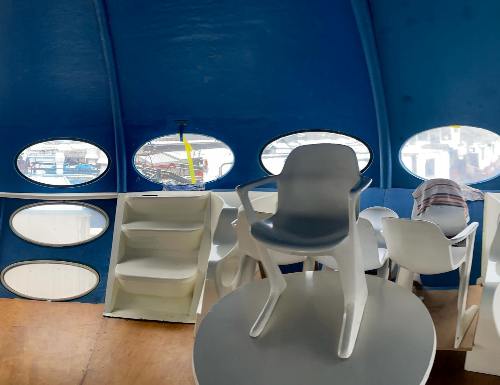 A couple of days later this cool video was posted. Interesting to see the rather too small (at least thats how they appear to us) outboard motors propelling the much much larger boat and its precious cargo.

The two photos below are from owner Cora's @futuro13berlin Instagram feed; the first illustrates an interesting and unusual way to relax in a Futuro kitchen and the second shows us just how "shiny" this Futuro is! As always our thanks to Cora for continuing to share photos of her Futuro. 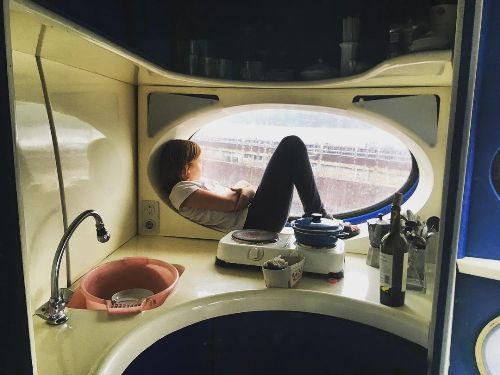 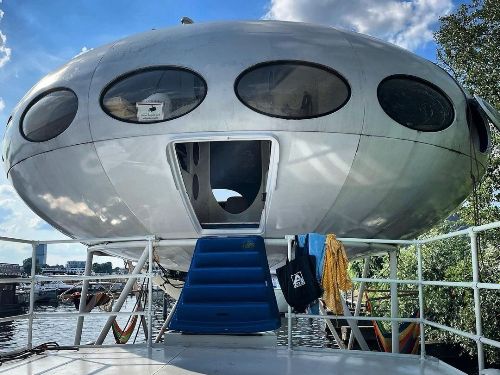 Owner Cora regularly posts content related to her Futuro to her Instagram account @futuro13berlin and we particularly enjoyed these two recent posts. The first is a great night time shot of the Futuro and the second a rather engaging drawing. 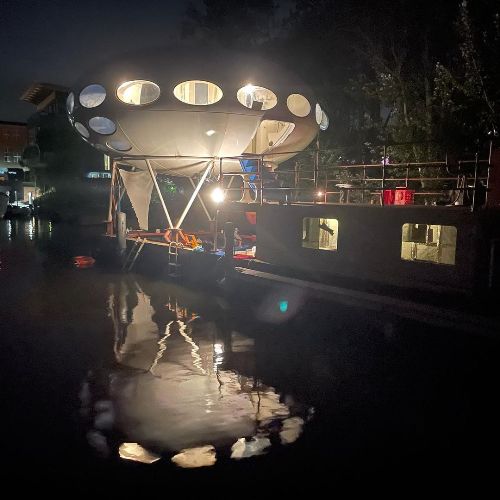 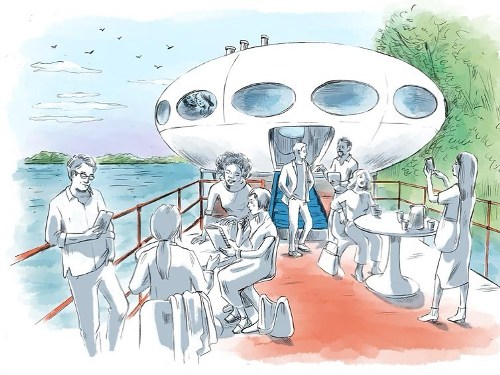 Based on these photos recently posted to Instagram by owner Cora (@futuro13berlin) and a comment attached to the first of them ("preparing another journey") it looks like this Futuro is embarking on the next stage of its journey; looking forward to seeing where she will eventually land. Thanks for sharing the photos Cora and good luck with this next part of the journey! 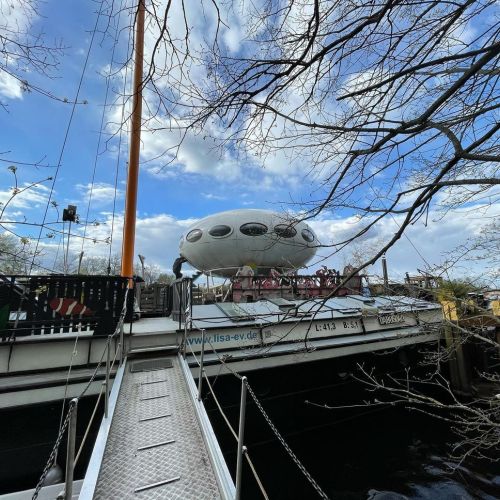 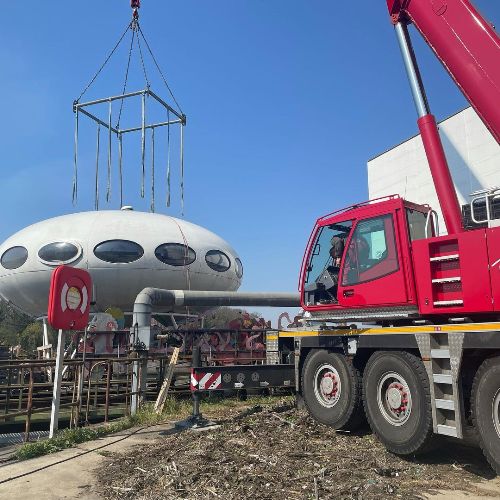 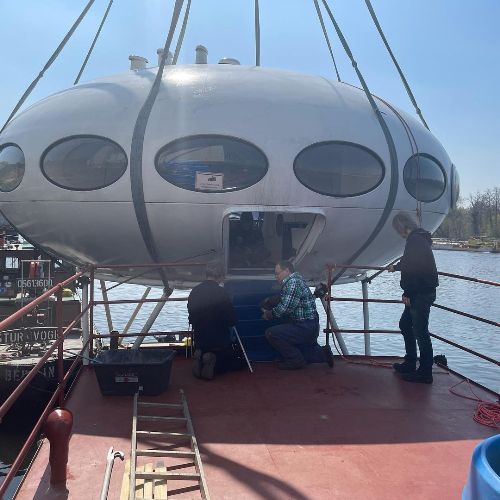 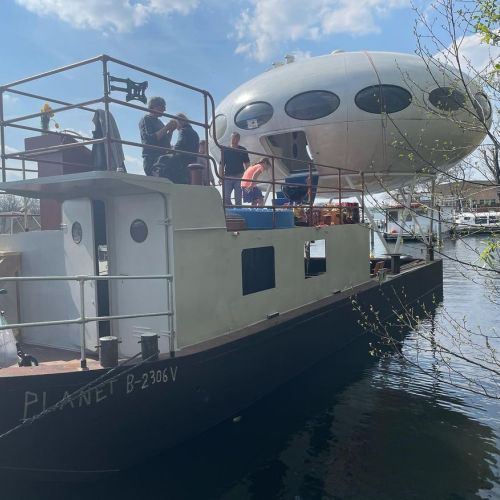 We were sad to see this photo posted to Instagram by owner Cora; the photo shows one of the windows of her Futuro after a vandalism incident.

Of course in the great scheme of things this is by no means a major disaster, a quick look at the news any day will reveal many far far greater problems in our world today but that does not mean things like this are OK, acceptable or even understandable. We struggle to imagine what possible pleasure anyone can derive from actions such as these and obviously the result is an inconvenience and expense to Cora that she does not deserve. Hopefully whoever did this will think more in the future and realize this is simply not the way to act; respecting other people and their property is not difficult and is the right thing to do. 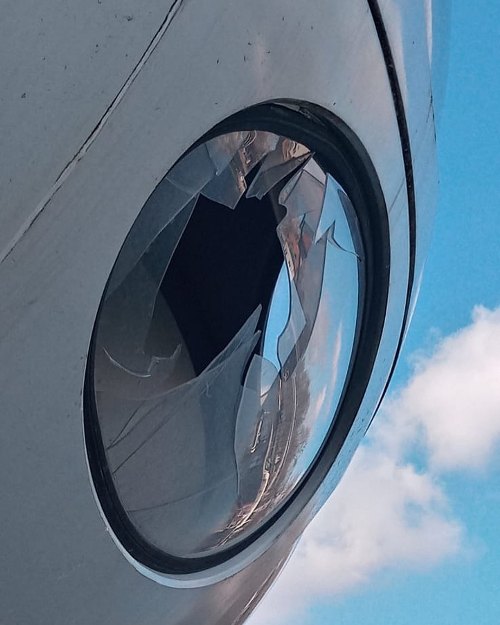 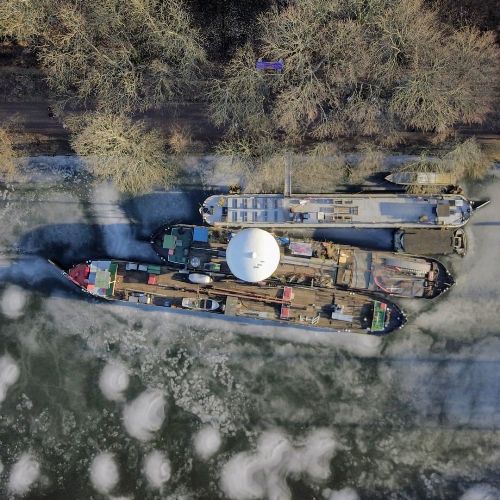 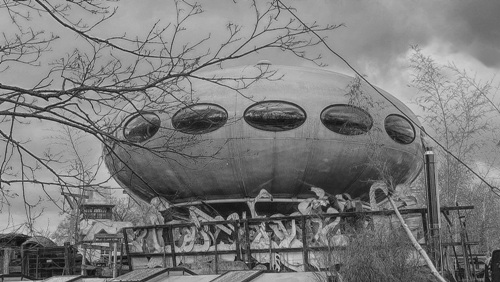 This awesome February 2021 photo featuring the Berlin Futuro in a "winter wonderland" setting on the completely frozen Spree river comes to us from owner Cora Geißler; the original photo can be found on Instagram here. 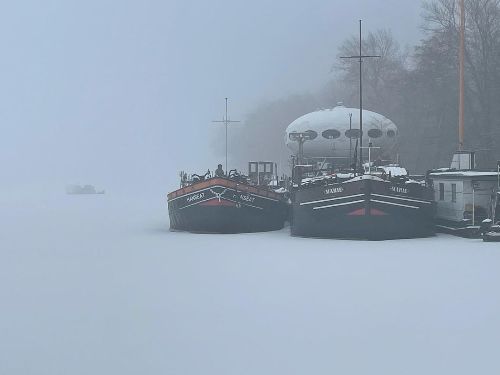 On 071220 owner Cora posted this video to her Facebook page; the video shows the Futuro on the next stage of its journey.

It seems that this Futuro is on the move though its final destination is not yet 100% certain. In an article titled "Auf dem Weg in den Plänterwald: Ufo landet wieder im Spreepark" or, according to Google Translate "On the way to the Plänterwald: Ufo lands again in the Spreepark" the website Berliner Kurier reports that the Futuro is currently loaded onto a barge awaiting its move to a new location; the barge is moored on the Spree at the Insel der Jugend (or Island of Youth).

The hope is that the Futuro will "return to its roots" and once again be sited back in Spreepark.

The following photos (top to bottom, left to right) are: The first four photos are from owner Cora Geißler's Instagram feed (futuro13berlin) and the remaining photos were posted to Instagram by Dacian Groza. 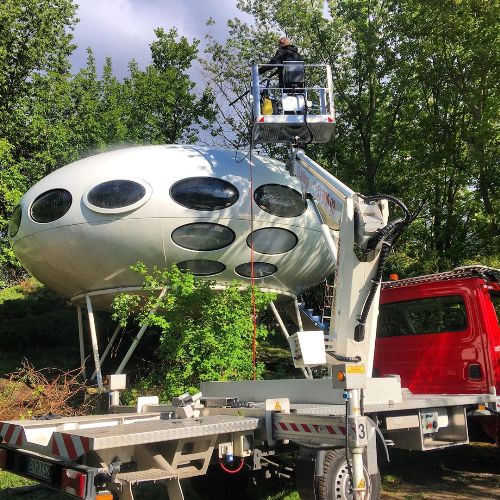 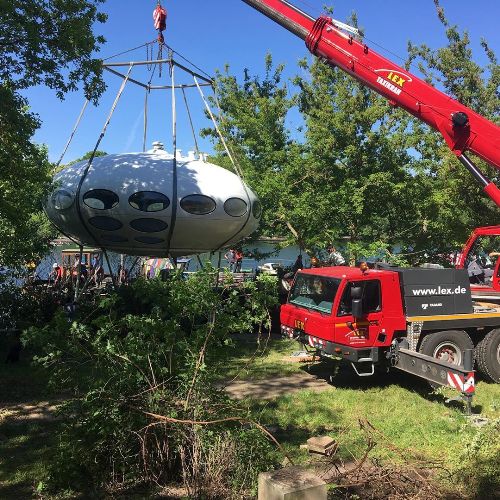 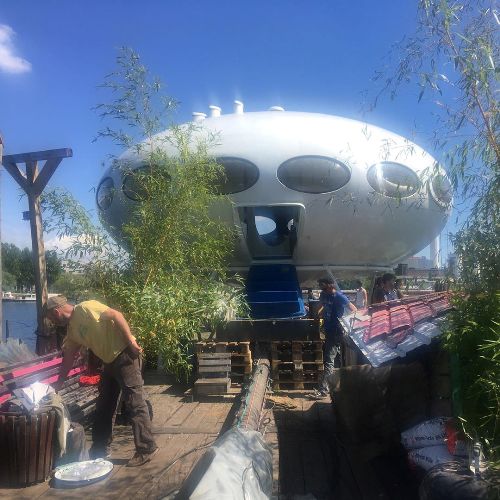 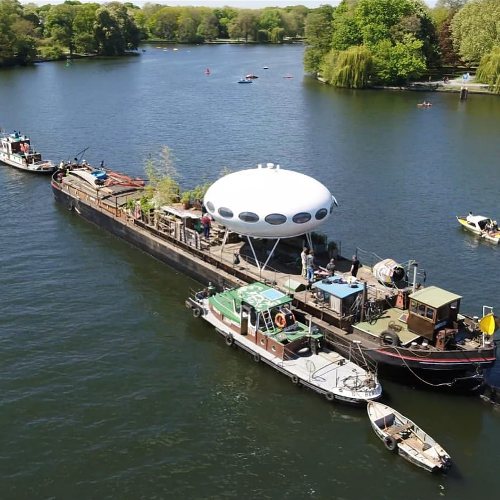 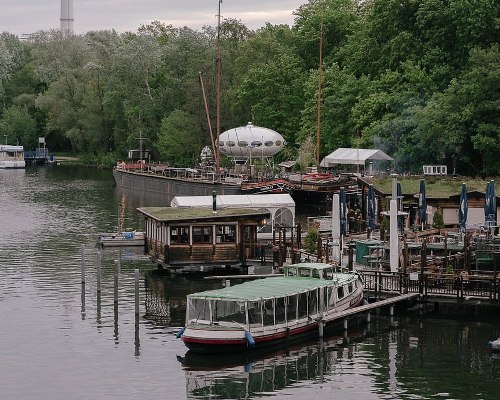 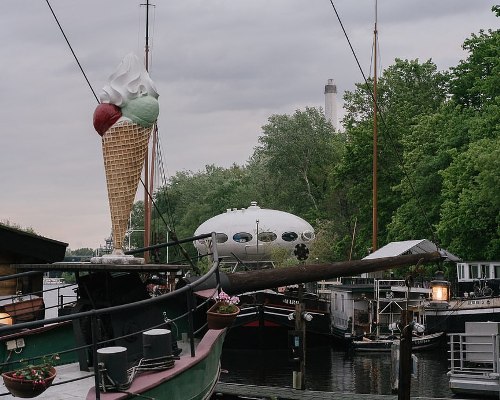 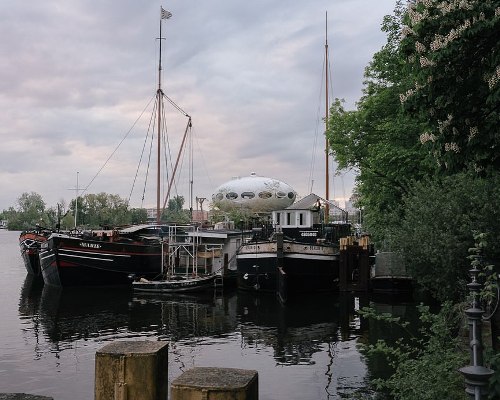 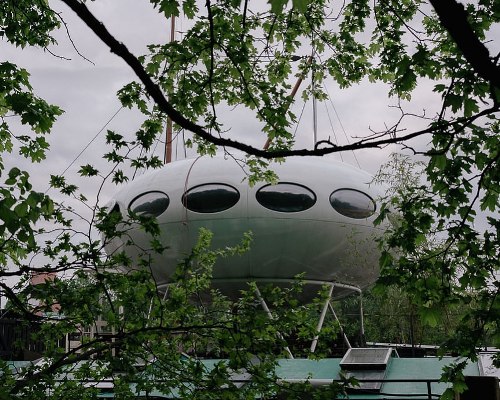 This rather nice "moody" pair of photos of this Futuro were sent to us recently by captain.lost. 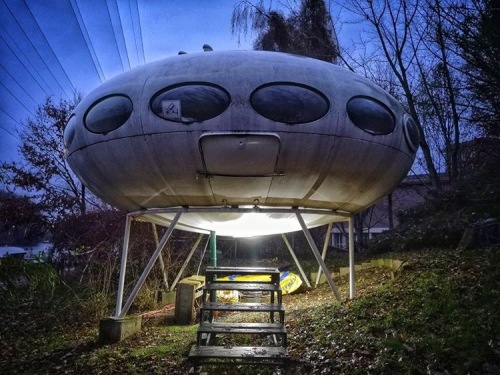 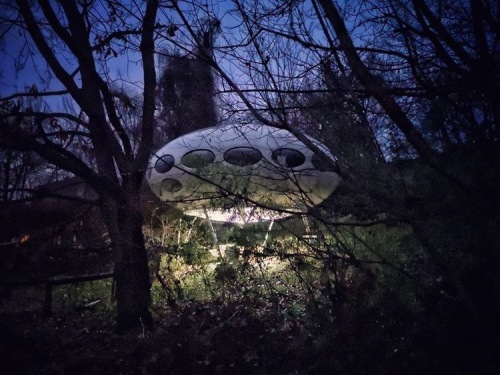 Futuros have featured as the setting for several music videoes over the years. The latest is this video for the track "When I Die" from American band Beirut's 2019 album Gallipoli.

We recently added a copy of the book Rummel im Plänterwald to our collection of "Things Futuro". The book documents the history of Spreepark from its beginnings in 1969 as "Kulturpark Plänterwald" through the change to Spreepark and eventual closure to the modern day.

The book includes four pages about the Futuro and, while we cannot read the German text, the inclusion of park maps for many different years does add one interesting piece of information relating to this Futuro's history.

Through 1996 the Futuro is prominently marked on the park map but from 1997 on it is not visible on the maps at all; in fact one of the parks rides, the Spider, was relocated and on the later maps occupies the space previously occupied by the Futuro. Without being able to read the text in the book we cannot be sure that the park stopped using the Futuro in 1997 but they certainly moved it.

With one exception the photos and drawings in the book are ones we have come across before but there is one that is new to us; this interesting aerial shot from 1994 that offers a view of the Futuro we have not seen before.

We came across this photo a few days ago; it was presumably taken using some kind of filter (though we suppose it could also have been edited "after the fact") and the resulting photo has a very surreal look. The photo is by Fix-Fokus and the original can be found on Flickr here.

This photograph by sabrinakleinas taken 120522.