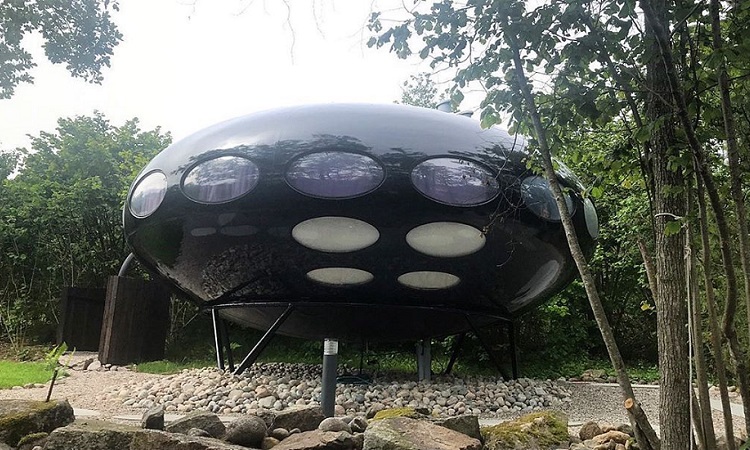 As a follow up to previous communications Eventyrlig Oppussing team member Ole Rosén-Lystrup recently sent us a link to an awesome 3D look at this Futuro and its immediate surroundings; you can check it out here.

The episode of the Norwegian TV Station TV3 show Eventyrlig Oppussing that featured the makeover of this Futuro has now aired. The show, season 5 episode 3 of the series, aired 092619. A preview for the show, that presumably aired on the station ahead of the broadcast, was posted to Instagram by team member Ole Rosén-Lystrup and can be seen below left and a second video, below right, was posted to the shows Facebook page.

Interesting to note that the black finish was not accomplished by the use of paint or gel-coat but by applying some kind of a film (and though we are perhaps being a little picky the application was a little untidy on the roof around the central skylight). Also it is clear that they actually did little to the Futuro other than the finish; the majority of the work was around other features on the property.

The actual program can be streamed online here and we are happy to report that it is not "geofenced" (we had expected that it would be) and so can be viewed anywhere.

Unfortunately we do not speak Norwegian and so we are unable to understand either of the previews or the show itself but they do contain some great Futuro footage and so, for us at least, they were still well worth a look.

Following the shows broadcast photos have popped up in quite a few IG feeds and some are featured below. Our thanks to Ole Rosén-Lystrup who sent us links to the various IG feeds from which these photos are sourced and thanks to the posters; oledrivved, drivved.no, halvor.bakke and eventyrligoppussing.

The photos are mostly of the exterior of the Futuro but there is an internal shot and we have also included a few shots of a couple of the other features on the property just because it all looks so awesome. Our personal favorites are the night time drone shot and the photo showing the unit partially refinished. 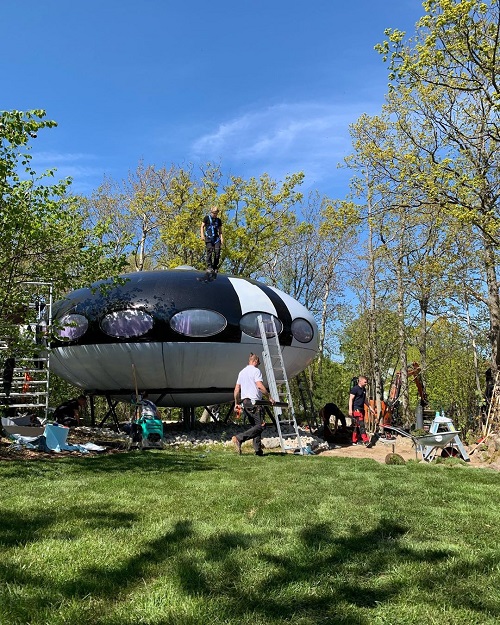 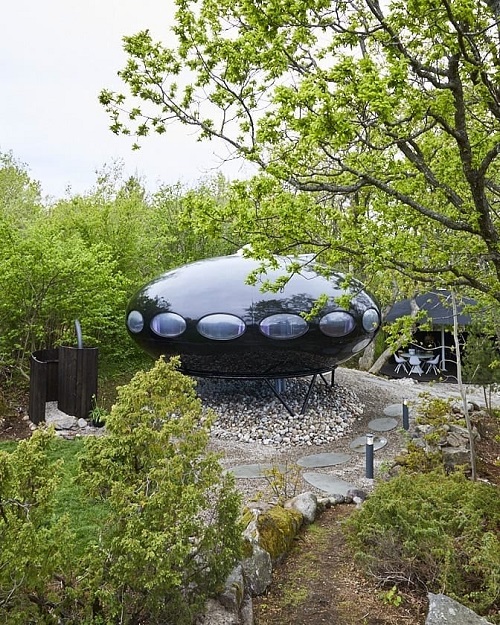 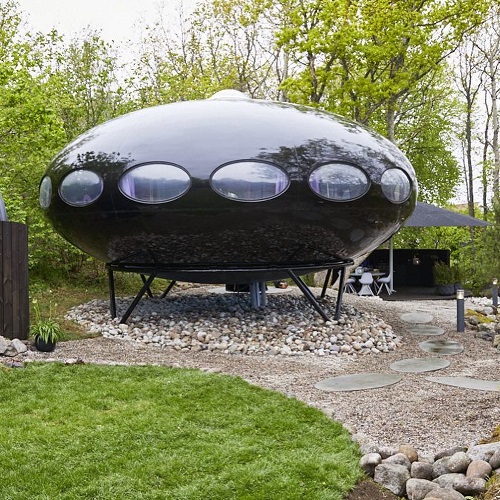 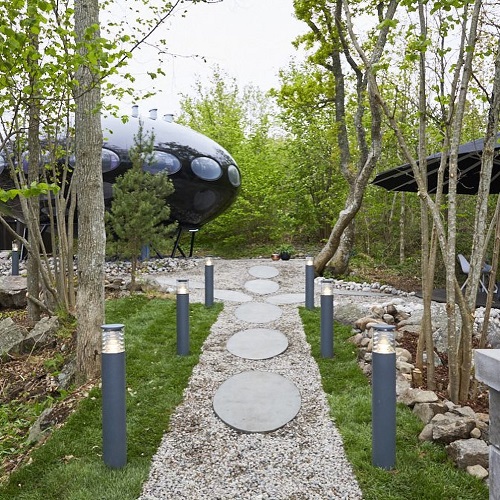 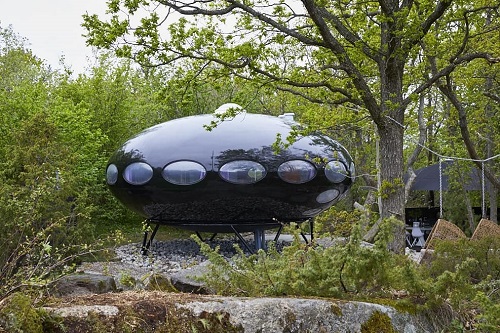 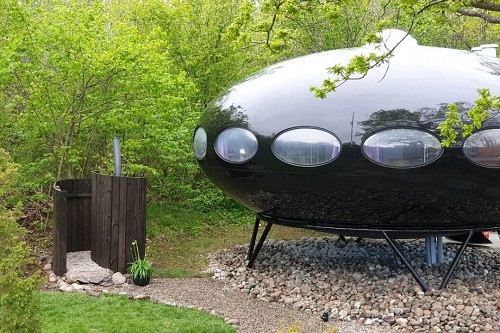 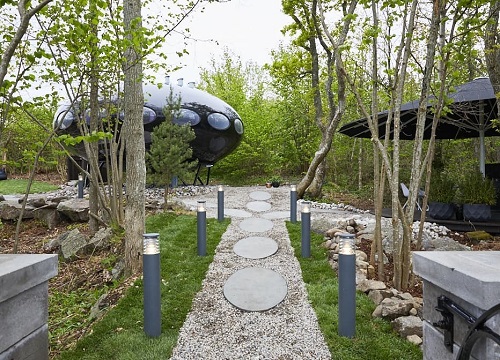 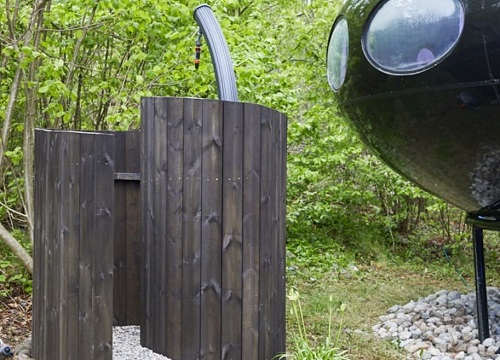 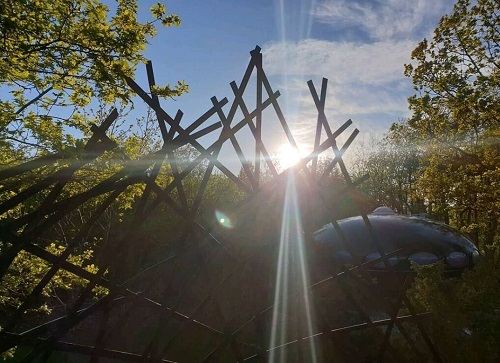 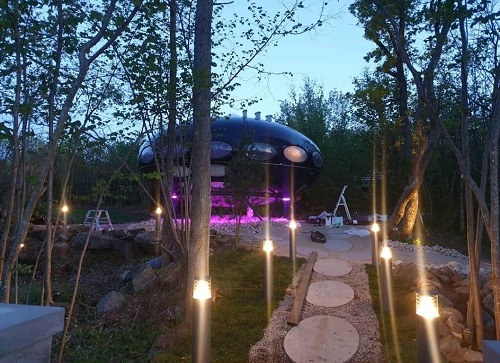 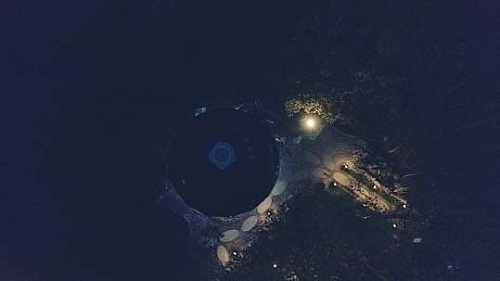 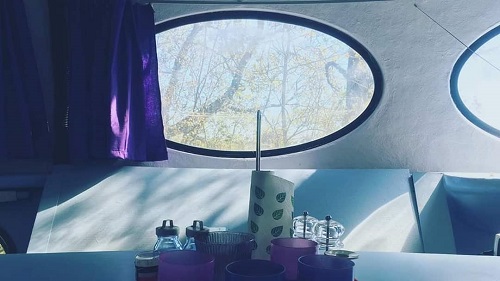 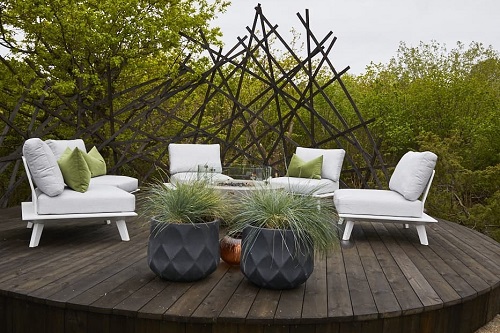 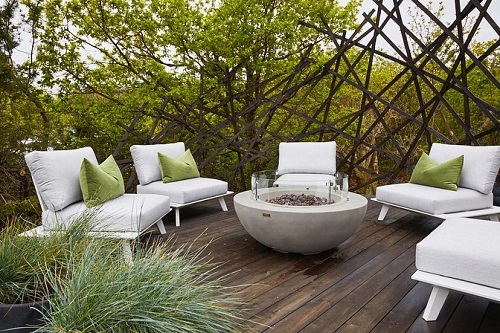 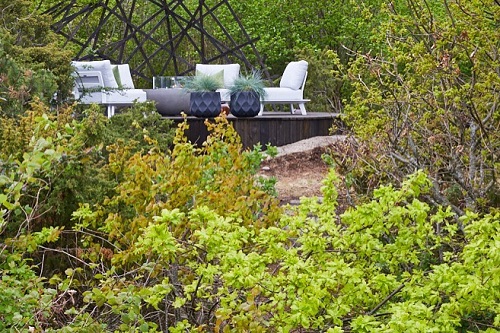 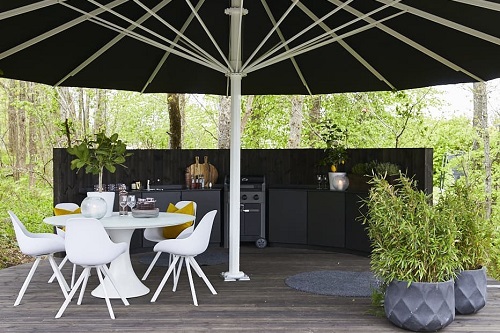 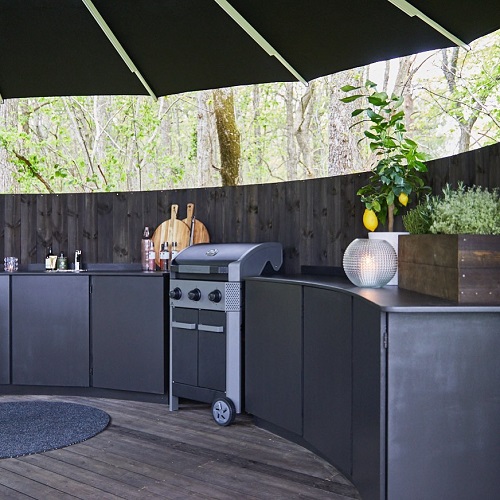 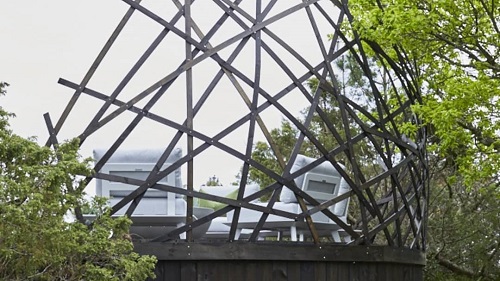 It seems that the update to this Futuro was a project undertaken by a Norwegian TV Show. Julie, a member of the owner's family, contacted us to let us know that the show Eventyrlig Oppussing or, according to Google Translate "Adventurous Renovation" which is broadcast by the Norwegian station TV3, would broadcast an episode featuring the Futuro sometime around mid-September.

The TV show is self-described in this manner:

"... interior expert Halvor Bakke and his carpenter team take you to the mountains, sea and forest. There will be strenuous trips with freight challenges and sleeping in tents, and you will see how they transform a mediocre resort into a gem in the midst of wild and beautiful nature. Watch out for an exotic and rugged renovation program that inspires, motivates, and entertains."

In the case of the Futuro project team member Ole Rosén-Lystrup tells us that the team's work (on both the Futuro and the surrounding area) included:
Ole goes on to add that the overall effect of the outdoor work is such that when viewed from the air the immediate area now looks almost like a crop circle formation; hopefully we will get a look at that when the show airs in September. On that note Ole also let us know that while show will be available for streaming on the station's website it will likely be "geofenced" so be prepared to "kick up the VPN" if you want to watch it outside the allowed geographical area (for sure here in the US).

Our thanks to both Julie and Ole for the information; very much looking forward to seeing the TV show.

That thought, a "tweak" to an iconic quote from Orwell's classic allegorical work "Animal Farm", was the first thought that entered our heads when we caught sight of the stunning new look being sported by this Futuro.

In May of this year the owners of this Futuro made changes and the result is awesome; we do not recall seeing a Futuro finished in black previously and now we have it has immediately become one our favorite looks for a Futuro.

The updated photo at the top of the page was posted to Instagram 062319 by livseve and the photo below (which also provides a little view of the setting in which the Futuro is located) was sent to us by Jostein Nilsen 062819. 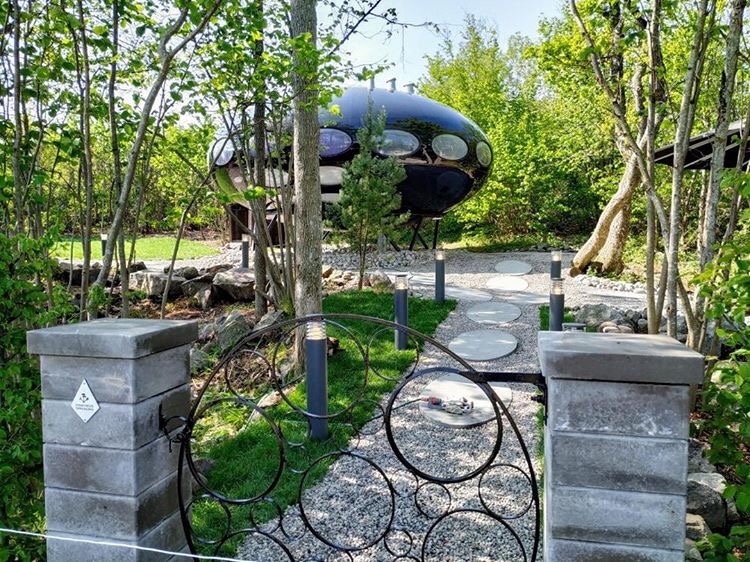 Anyone who visits this website might conclude we are, to say the least, enthusiastic and passionate about the Futuro; others might suggest we are perhaps a little obsessive. Cannot really argue with any of that but we are not alone. Yves Buysse recently posted this photo to Facebook; the post was accompanied by the following note:

That's dedication! Sounds like a fun trip. Thanks for sharing the photo Yves. 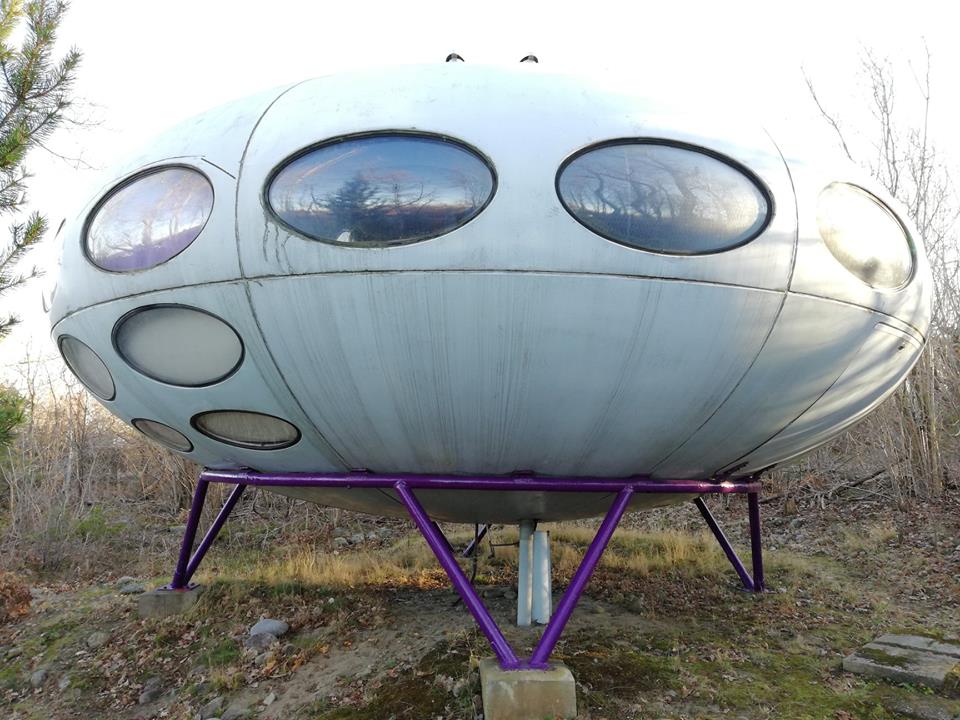 This is one of the less photographed Futuros and we do not recall seeing many, if any, interior shots so it was very interesting to see this pair of photos posted to Instagram by niko_jel on 082518. From the little that can be seen it appears that the Futuro retains at least some of the original interior fixtures and fittings and that it is in excellent condition. 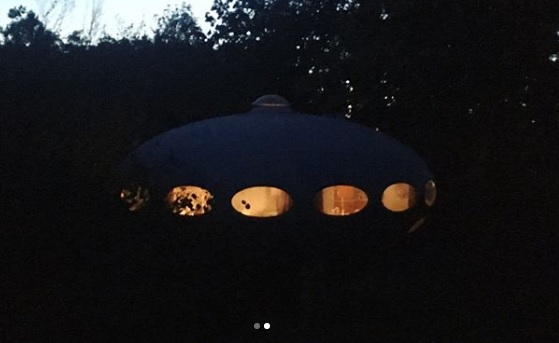 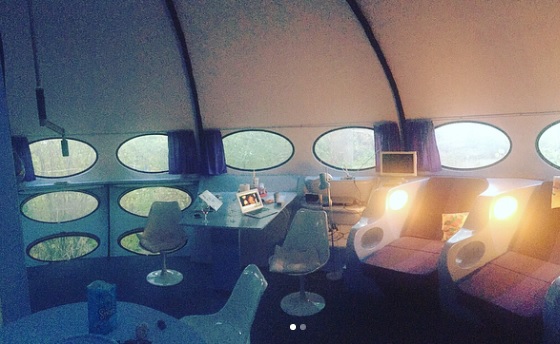 Lars Krog shot two of our favorite photographs of this Futuro on 080213 They are displayed below with Lars' permission. 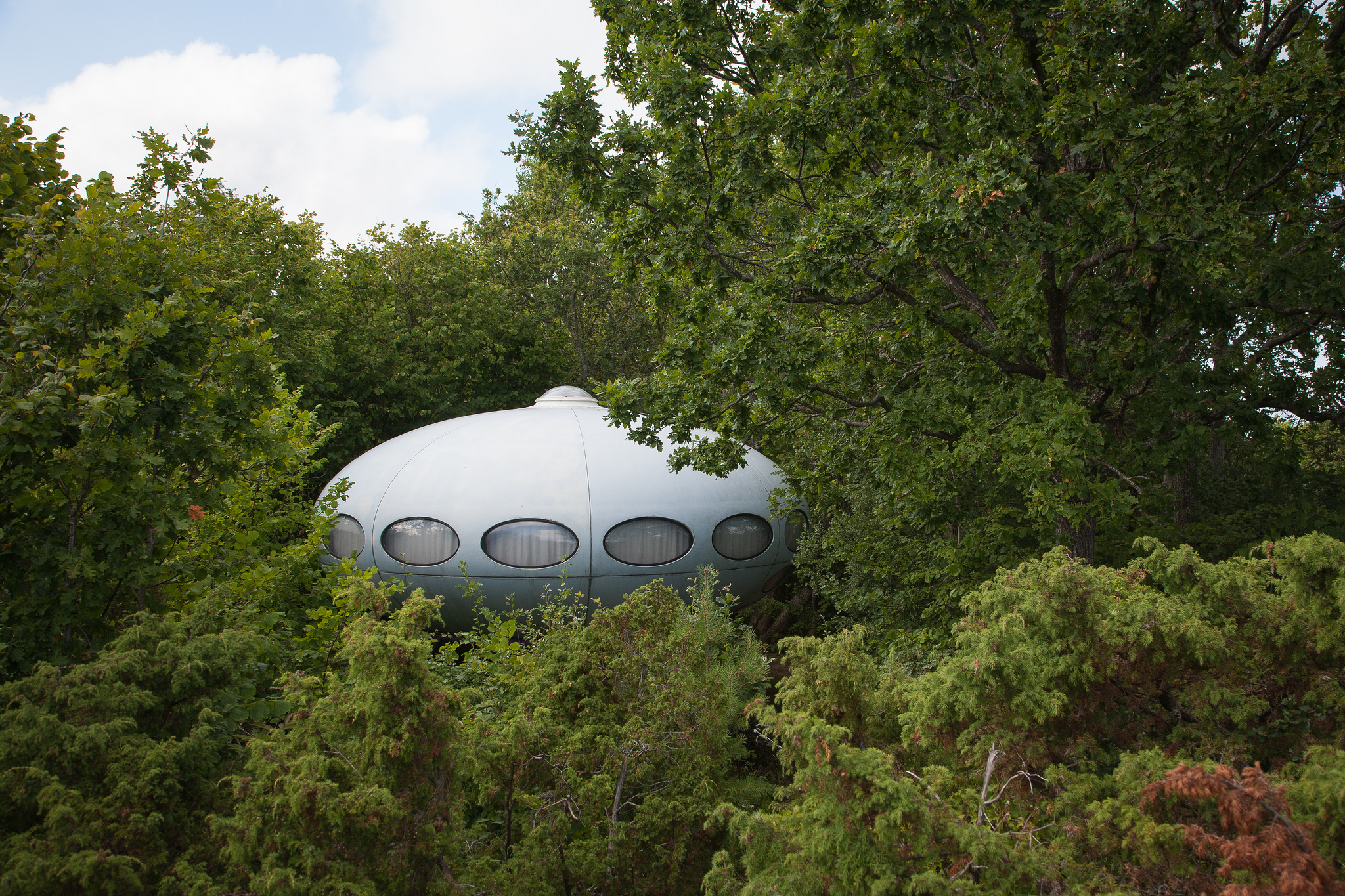 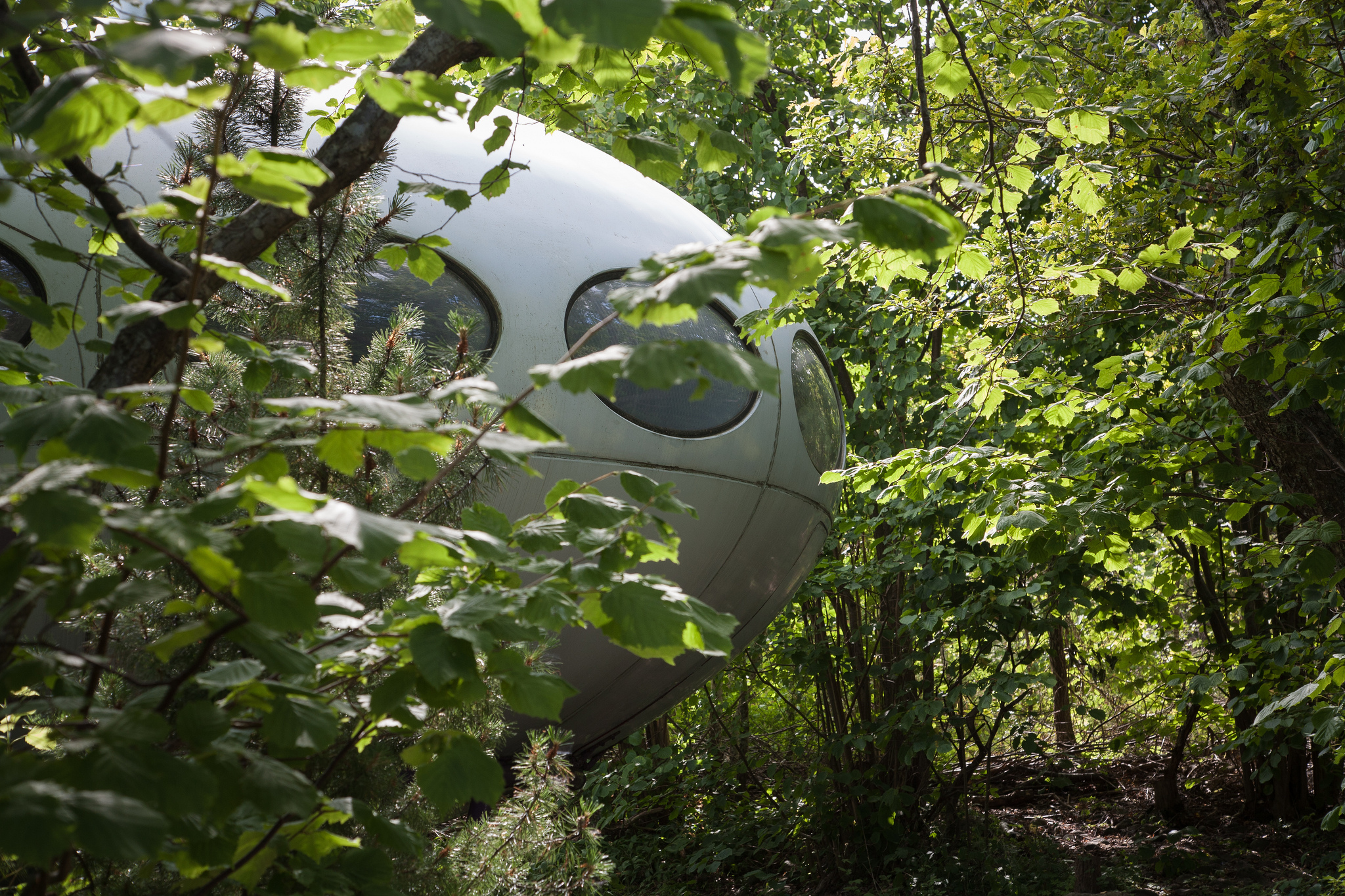 In a blog post that can be found here (Norwegian | Google translation to English here) we find shots of an article published in the 120211 issue of D2 Magazine. The article, titled "Tilbake Til Fremtiden" (which Google translates to "Back To The Future"), was written by Elisabeth Sperre Alnes.

Being the Futuro obsessives you all know us to be we had to write to the magazine's publisher, Oslo based Norwegian daily newspaper Dagens Næringsliv, which distributes the weekly lifestyle magazine D2 free with the Friday edition of the newspaper to ask if there was any way to obtain copy.

Dagens Næringsliv was kind enough to respond, and also kind enough to offer to send us a copy free of charge; what is more when we asked about the cost of shipping they said don't worry about that either (and we are talking Norway to the US here!). In a day and age when money seems to dominate everything coming across a business that simply offered to do something for us free of charge was refreshing and quite a surprise. Dagens Næringsliv - you impressed us - thank you.

As for the article it is in Norwegian so of course we cannot read it (if anyone happens to be able to translate Norwegian to English and would like to help out please let us know) but it is accompanied by some nice photos (taken by the author) which clearly show us that this Futuro has been well maintained and is in very good condition.

Photos of our copy of D2 can be found in our collection of "Thing's Futuro".

Other than photographs there seems to be very little information floating about on this Futuro House. It features on the "Norway" page on FuturoHouse.com, one of the longest running Fururo sites, where there are some additional photographs and also directions to the location from T.A. Nyquist but that is about all we have been able to find so if you happen to have any additional information please let us know.

There is another recent image on blipfoto.com from May 2011.

The two images below are by watz under CC 2.0 License (our thanks for making your photographs available under CC). 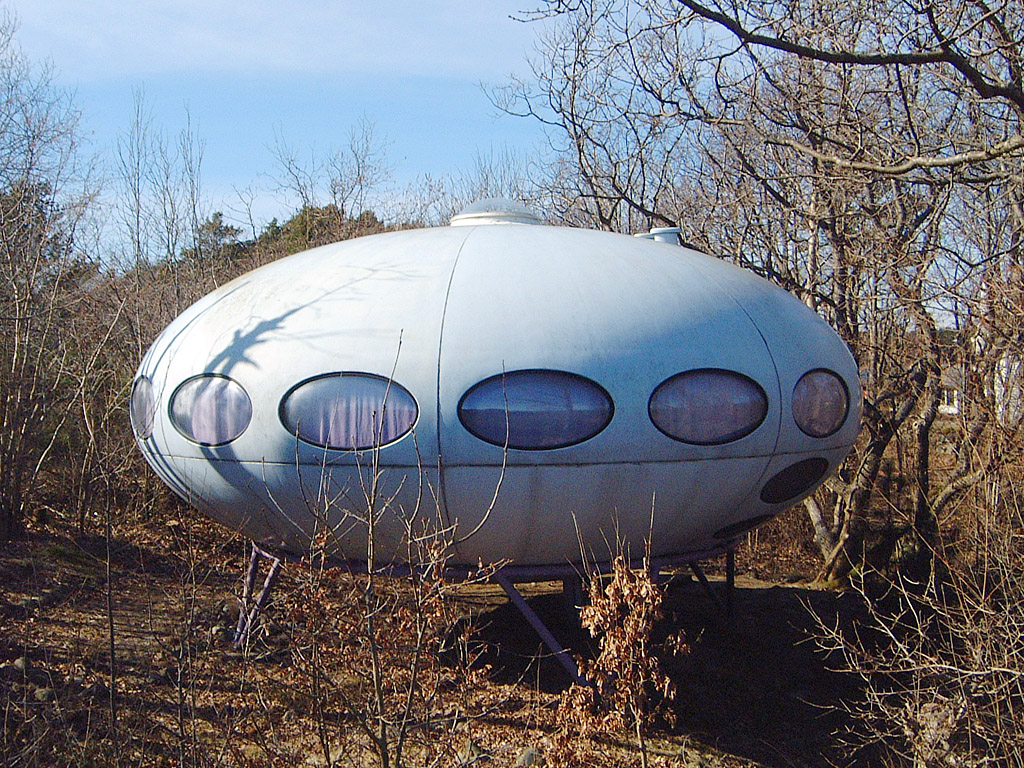 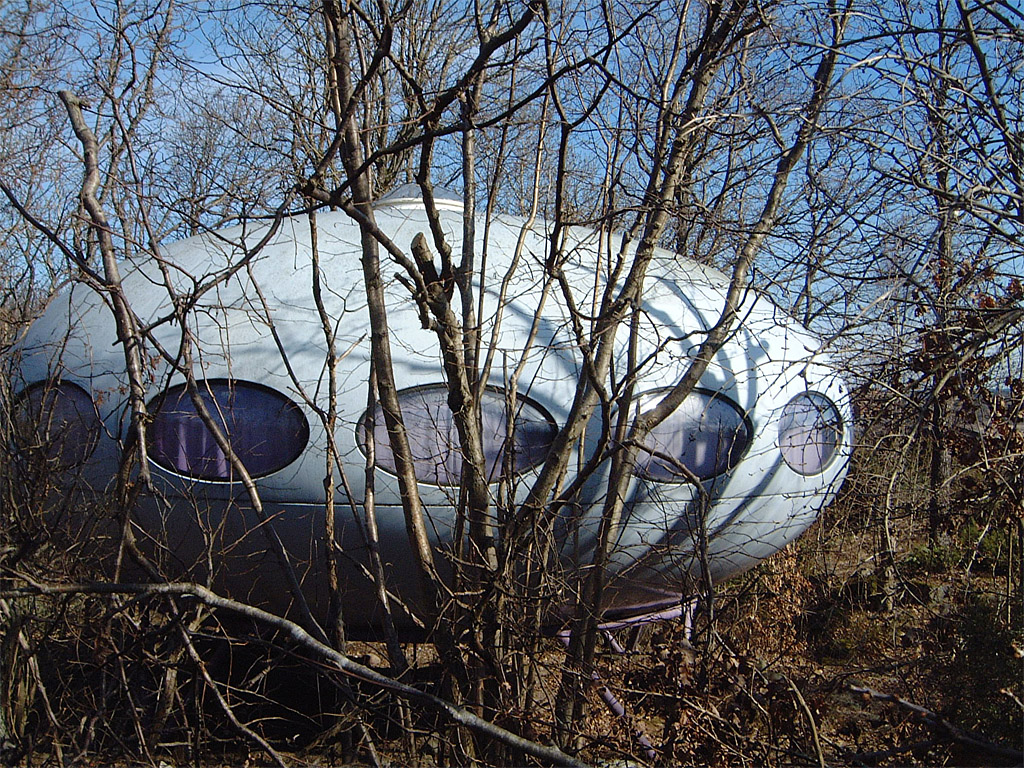 This photograph by vibesol taken 080920.