The collection contains all manner of items from unique original pieces from the early days of Futuro through contemporary mass-produced items and everything in between. At the time of the latest update to this page the collection comprises 476 physical items plus 160 "digital" items (in particular digital copies of newspaper articles) and these pages are effectively the collection's "catalog".

This collection is a collection of physical items associated in some way with Futuro. That said there are a several magazines and newspapers that contain articles on Futuro that we have not yet been able to find physical copies of and, in the "digital age" we all now live in, it is not unreasonable where they are available to add "digital versions" of these to this collection until such time as we able to source physical copies. In the event you have, or are aware of, physical copies of any of these publications for sale please let us know.

Listed below are "digital" magazines and magazine articles related to Futuro included in this collection.


The City of Espoo publishes Espoo Magazine. Issue 2 of 2018 contains an article that reports on the events planned at the WeeGee Exhibition Center (home of Futuro #001) during 2018 in celebration of Futuro's "50th Birthday".

The magazine is published in Finnish and it is available for download from the City of Espoo website as a PDF file here; there is also an English version here (in the event that either link does not function the Finnish version can also be found here and the English one here). 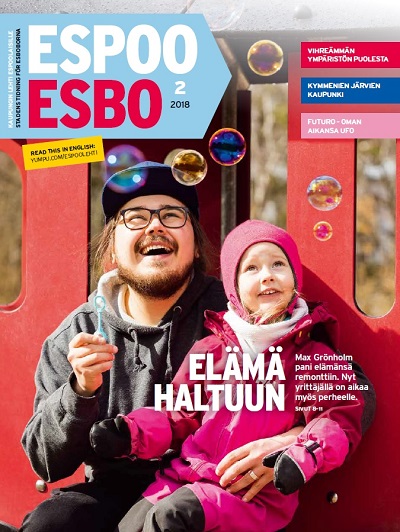 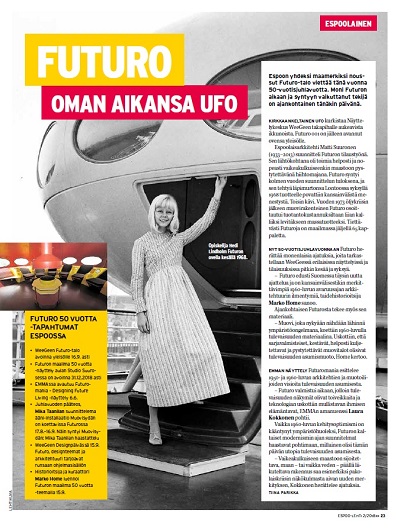 MuoviPlast is a magazine published by the Finnish Plastics Association. The January 2012 issue of the publication includes an article about Futuro #001 and its restoration prior to being installed at WeeGee Exhibition Center in Espoo, Finland.

The article also references the company Ekin Muovi which was involved (we believe) in the restoration of Futuro #001 (Ekin Muovi was also involved in the 2001 project to restore the Futuro now located in Kauhava and then transport and display it at the 7th International Istanbul Biennial in the grounds of the Ottoman Mint at the Topkapi Palace in Istanbul, Turkey).

Photos accompanying the article include a number of shots of the Futuro during restoration that we imagine would have been taken at the Ekin Muovi shop prior to the unit being moved to WeeGee. 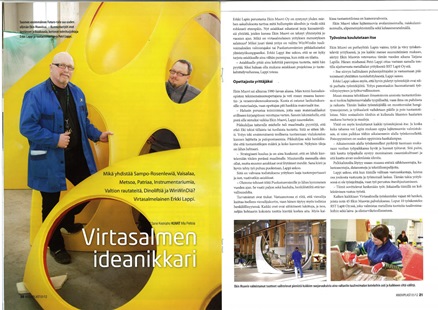 The 4/2012 issue of Finnish academic publication TEK included a short article on Futuro #001 titled "Ensimmäinen Sarjavalmisteinen Futuro" or, according to Google Translate, "First mass-produced Futuro". The article was accompanied by a single photo. 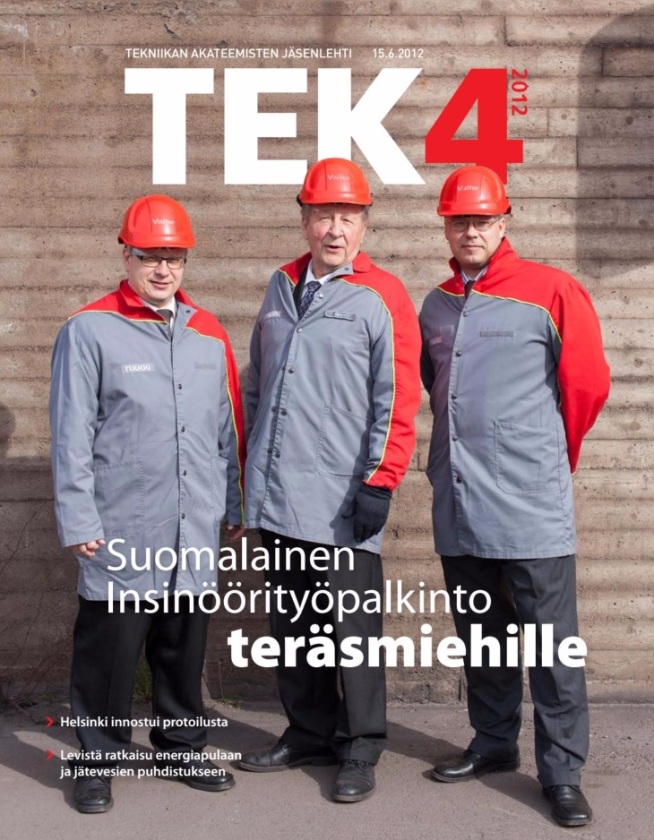 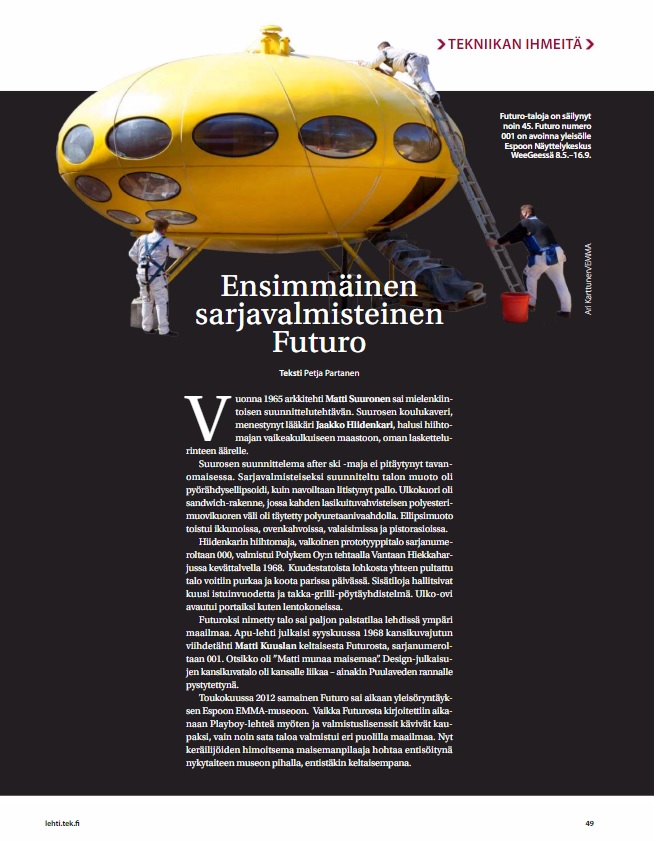 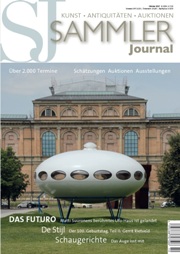 The October 2017 issue of the German publication The Sammler Journal included a lengthy (8 page) article on the Munich Futuro. The article is accompanied by a number of nice photos

The text of the article is in German so we have been unable to read it and do not know if there is any new or particularly interesting information in the article. However we ought to be able to get it translated fairly easily as you can "load" a PDF file into Google Translate to get a translation. Unfortunately the PDF of the magazine is too large but once we have been able to break it into several smaller files we ought to be able to get it translated. If at that time we find anything new or of particular interest we will update this page accordingly. 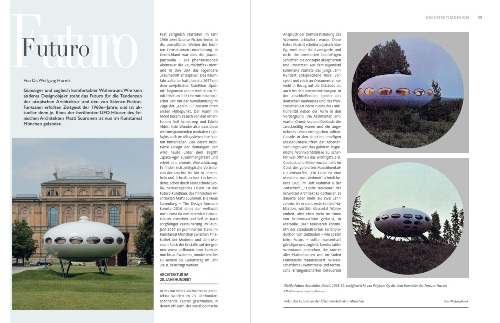 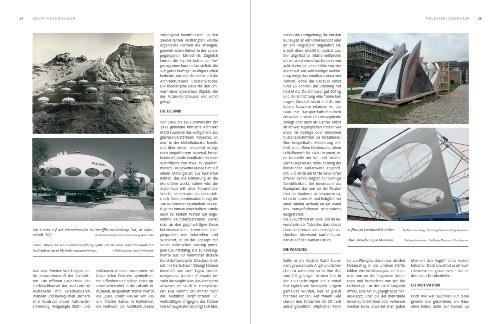 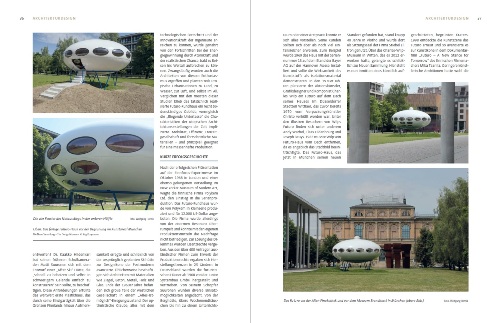 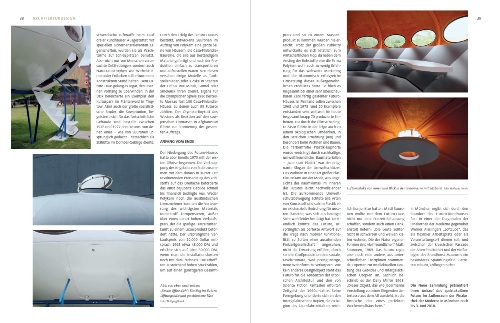 Our thanks to Len at futurohouse.com for finding and sharing this .pdf of the article. 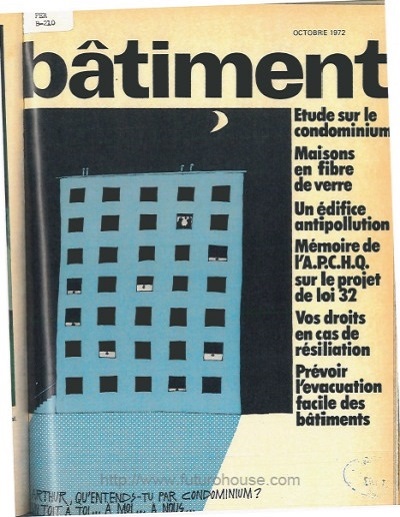 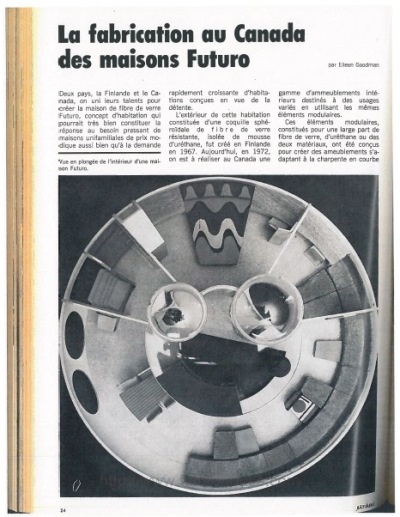 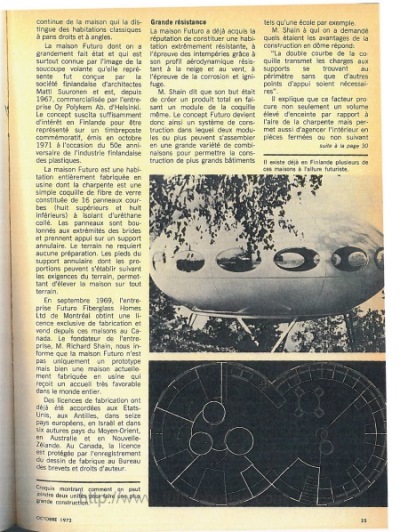 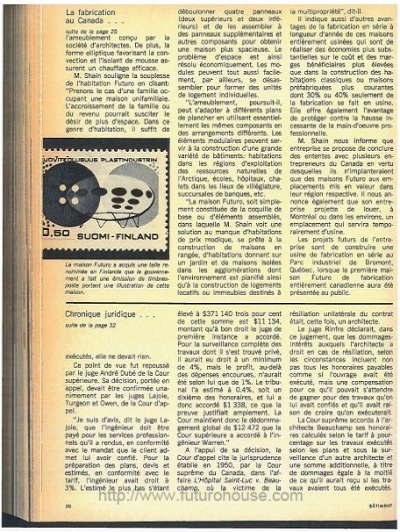 The December 2011 issue of Spanish language publication La Tekla includes a multi page article entitled "Arquitectura UFO". The article is a "top ten" list with the Nevlunghamn Futuro appearing on page 107 at Number 3 in the list. The publication can be found online on issuu.com or a PDF version can be downloaded here. 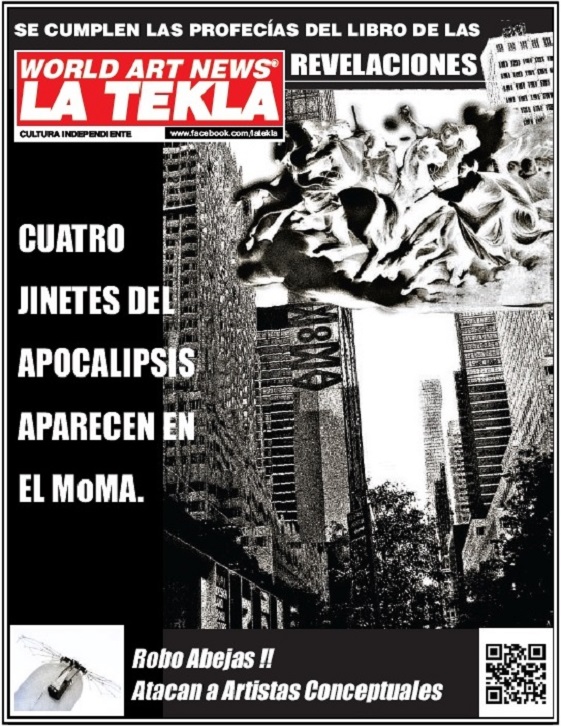 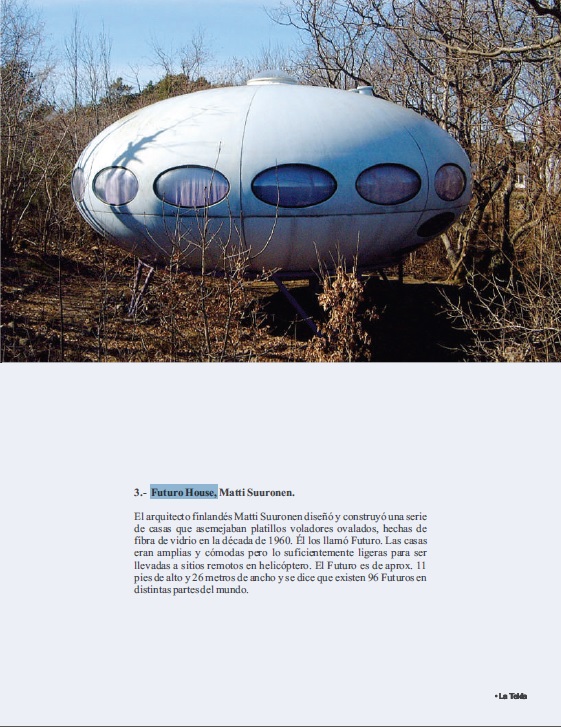 Specifically the article reports on the display of Futuro #000 at the Museum Boijmans Van Beuningen, Rotterdam, Netherlands and includes comments from Matti Suuronen made during a visit to the exhibition. A PDF version of the magazine can be downloaded here. 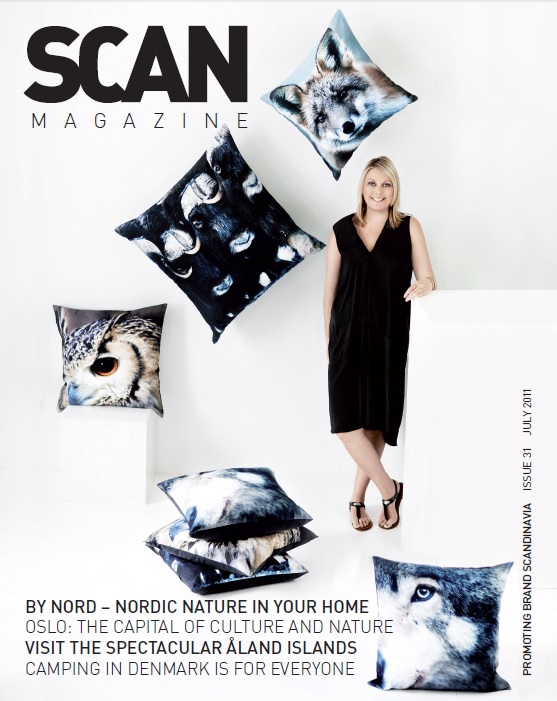 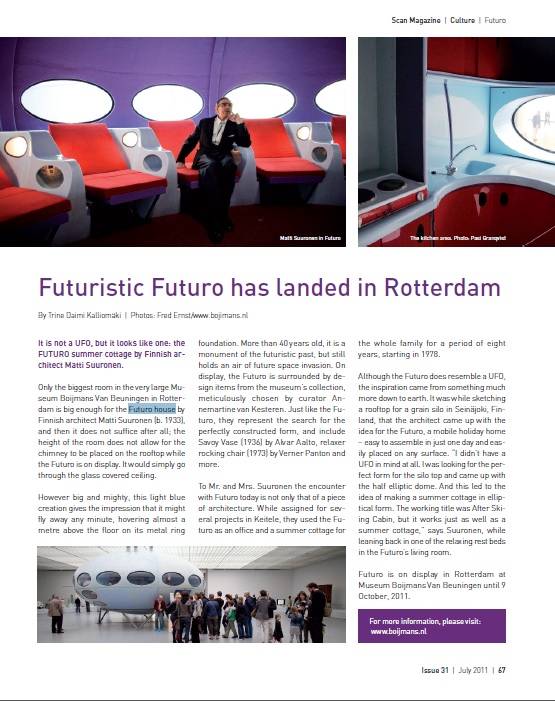 
The 2/2020 issue of Espoo Magazine carries a brief mention and a single photo of Futuro #001 which is of course located at the WeeGee Exhibition Center.

The Futuro is featured in the "Where To Go" section where it is noted that the Futuro will be open to the public mid May through September 13 in 2020. The magazine can be found (and downloaded) here. 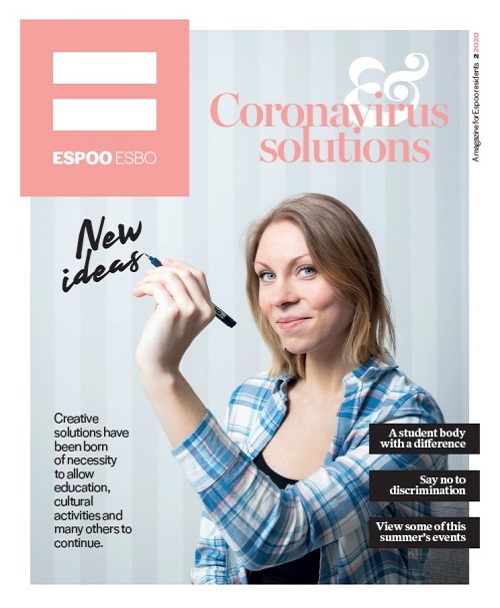 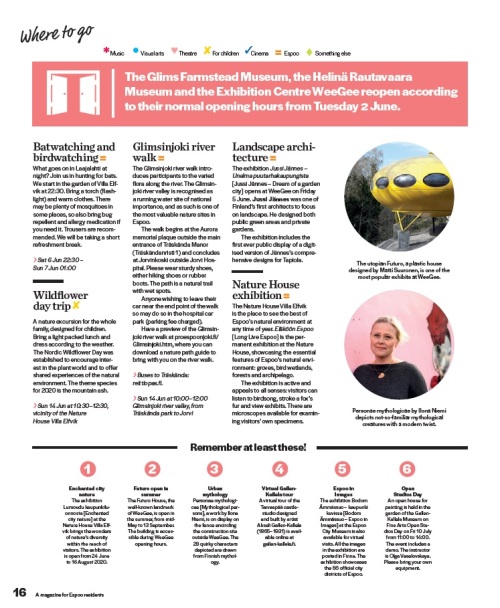 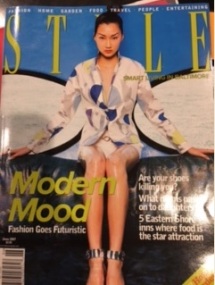 We received an email recently from Suzin Boddiford with this photo attached.

Suzin told us that back in 2007 she produced a fashion shoot for Baltimore STYLE Magazine at the Milton Futuro.

Right now all we have is this photo which shows the cover of the magazine (which does show the Futuro) and we are hoping to track down a copy of the magazine in the future; it wojuld be nice to be able to see the article and the remaining photographs.