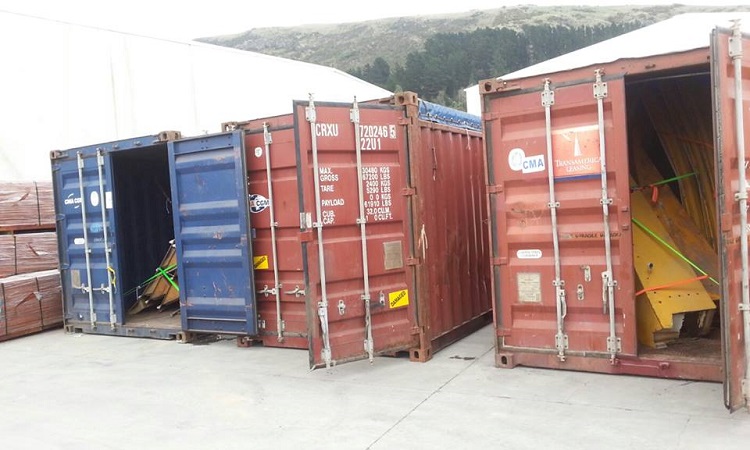 Nick has now confirmed that this Futuro has been moved to Rangiora, New Zealand; a town some 30 km or so north of Christchurch.

How does the old saying go "What goes around comes around?" In recent email correspondence we have learned that this Futuro, originally located in New Zealand and then transported to Australia has "returned home" to New Zealand. Nick McQuoid, owner of the Kaimaumau Futuro told us he has now added this Futuro to his collection.

Nick also added a little more of the history of this unit telling us that this was the unit displayed at the 1974 Commonwealth Games in Christchurch, New Zealand. The Futuro was subsequently purchased by Paul McNeil and shipped to Australia; it was never reassembled post shipping and actually remained in storage from 1996 until 2013. Nick purchased the Futuro "a couple of months ago" and has now had the unit shipped back to New Zealand. At this time its "destination" is not known to us (and of course the Kaimaumau Futuro is also on the move to location unknown).

Nick kindly sent us some photos of the Futuro being removed from the storage containers on arrival back in New Zealand which can be seen below. Should Nick choose to share any information about his plans for this Futuro (and for the Kaimaumau Futuro for that matter) that we are able to publish we will of course update this page. 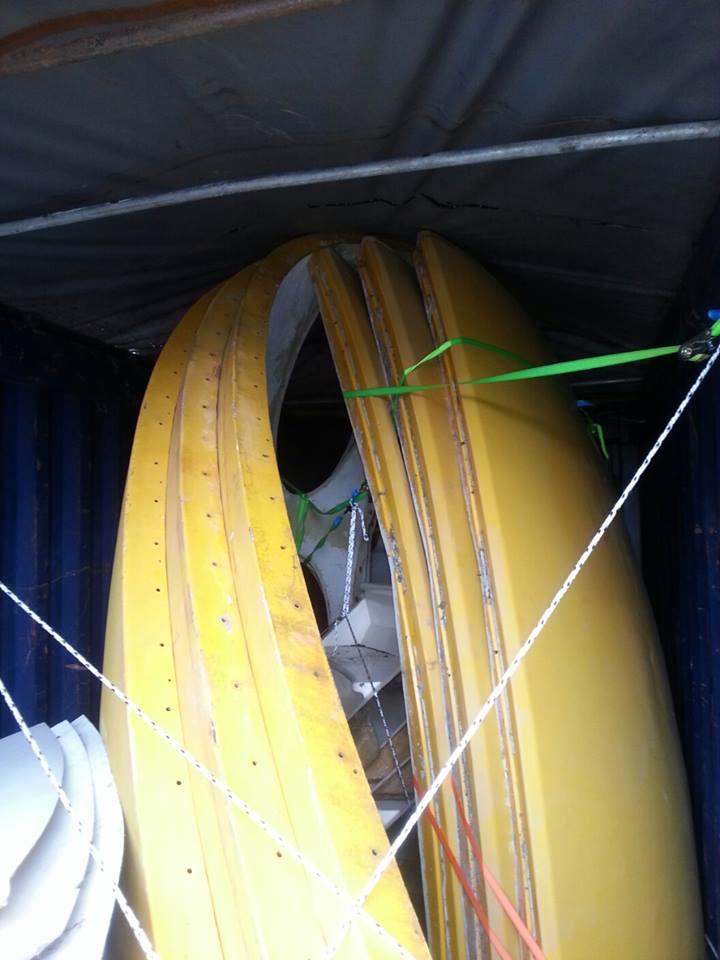 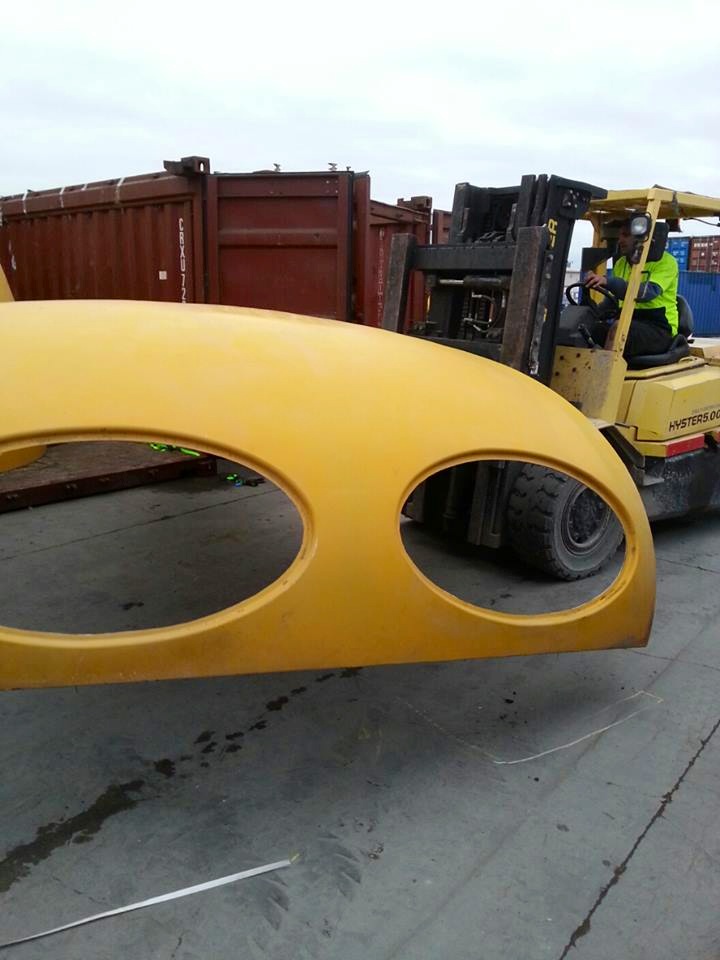 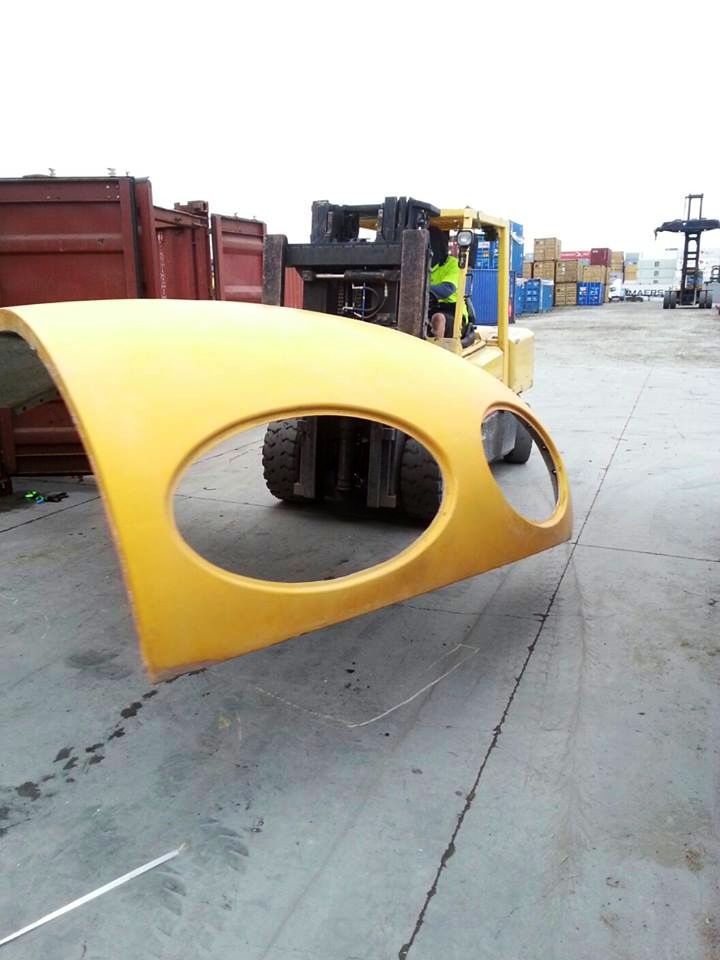 Nick also sent us this photo of the Futuro as it appeared when used at the by the Bank Of New Zealand at the 1974 Commonwealth games in Christchurch, New Zealand. 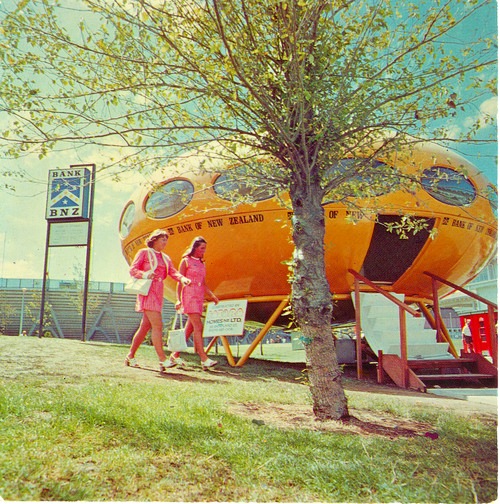 This Information Previously On The "Lost Soul's" Page

Influential Australian artist Paul McNeil moved from his native New Zealand to Australia in 1987. A Futuro fan and owner, Paul wrote the chapter on Futuros in New Zealand in the book Futuro: Tomorrow's House from Yesterday edited by Marko Home and Mika Taanila.

Paul McNeil found his own Futuro in New Zealand, disassembled it and had it shipped to Australia. The images below are from the website "Modern-Post Modern" (m-pm.com) and show the Futuro in various stages of disassembly prior to shipping. 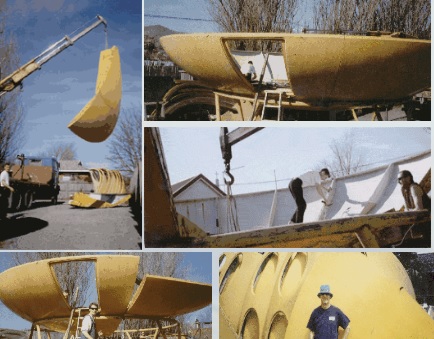 On the website we learn that Paul first developed an interest in the Futuro after seeing one at a 1974 home show. He watched and waited for a Futuro to come up for sale and eventually he found one. The website appears to no longer exist in its own right; instead it displays the same pages as futuro-house.net but it was archived by the Internet Archive Wayback Machine and is accessible here.

On page 126 of the book Futuro: Tomorrow's House from Yesterday there is a photo of McNeils disassembled Futuro post its arrival in Australia; the photo is annotated "The author's Futuro being assembled in Bungwahl, Australia."

An article on the Sydney Morning Herald website however seems to "muddy the waters" a little as far as location is concerned. In the article we read that:

"Mambo artist Paul McNeil is a big fan of the Futuro. He has had one shipped over in pieces from New Zealand, to put on his property in the Byron Bay hinterland ... Two years ago McNeil fulfilled his childhood dream of owning a Futuro. He purchased a bright yellow model from New Zealand and is getting ready to assemble it to use as a studio, or "just a fun place to hang out"."

The article is undated as far as we can tell so the "Two years ago" statement really means nothing (the url suggests it is a 2007 article but almost certainly the Futuro moved from New Zealand to Australia prior to 2005 since there is the photo of it in Australia in the Marko Home book and the first edition of the book was published in 2002).

What is interesting about the article however is the reference to the Futuro being located on McNeil's property in the Byron Bay hinterland. Bungwahl is some 250 km or so north of Sydney; Byron Bay on the other hand is more like 750 km up the coast. Any Google search on Paul McNeil will quickly show that he lives in Byron Bay so is the Futuro in Bungwahl or is it in Byron Bay?

To be honest we do not know; in fact we went round and round as to whether to class this as a "confirmed" or "lost" Futuro. Were it not for the mention of Byron Bay on the Sydney Morning Herald website we would probably have listed it as confirmed in Bungwahl and given it a dedicated page but with the mention of Byron Bay we decided to go with "lost" though there is little doubt that while it is disassembled this Futuro does still exist somewhere and so for the purpose of the statistics on the main page we are including this in the "confirmed" count unlike the other "lost" units discussed on this page.