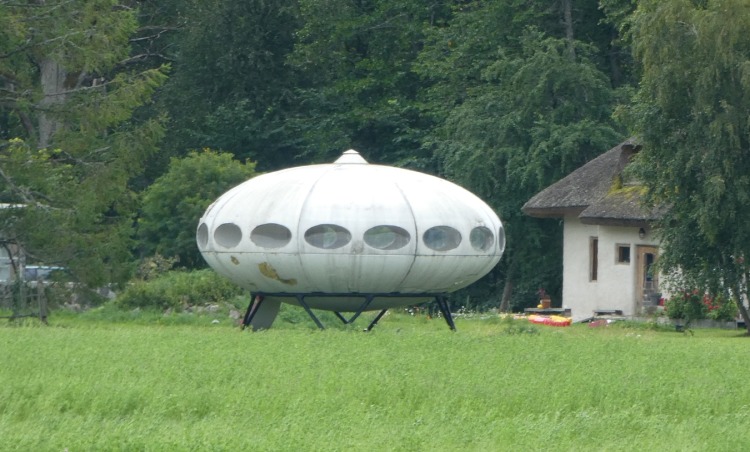 Some Futuros are photographed all the time while others are almost never photographed. This unit is definitely in the latter category so it is always great to see a recent photo surface. This photo was taken July 2019 by Yves Buysse; the original can be found on Facebook here. 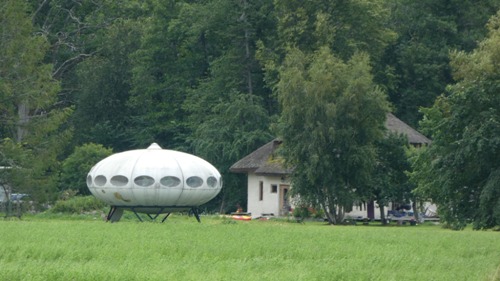 This T-Shirt, an interesting recent addition to our collection of "Things Futuro", was available from a local shopping center in Halinga during the time this Futuro was located in that area. It dates from 1997 and was very kindly sent to us by Marko Home; thanks Marko. 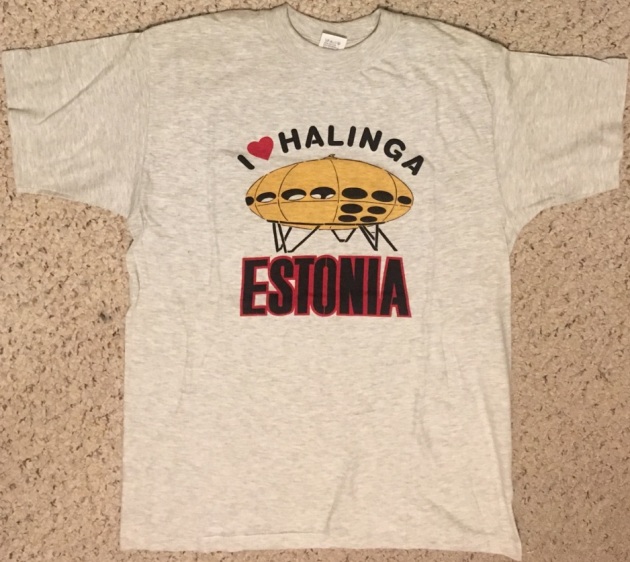 This photo of the Matsalu Futuro, posted to Instagram a few months back by theokeiko, has a little surrealistic feel to it if you ask us! 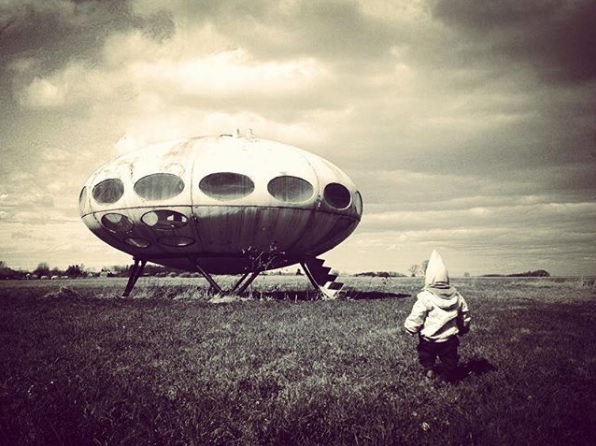 This multi-view postcard of a Shell Gas Station/Rest Stop on Lake Lahnajärvi shows this Futuro in one of the photos (top left); but only just - you have to look closely.

The postcard itself is undated but it is postmarked 092481. 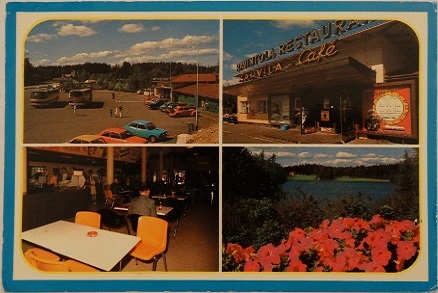 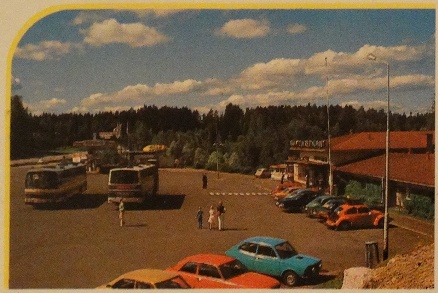 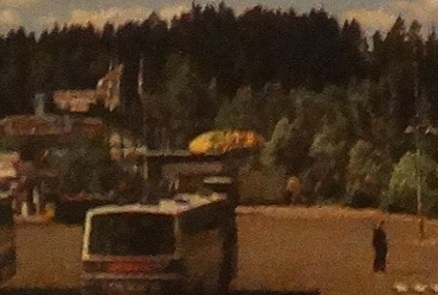 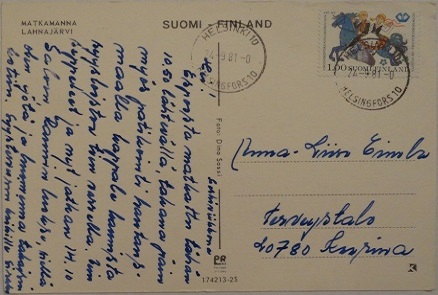 The two photos below were recently added to Flickr by Yves Buysse. The second photo is detail from a vintage postcard that shows this Futuro during its time on Lake Lahnajärvi. What is most interesting is that the photo shows that there was a deck/platform around the Futuro. Other photos we had previously seen of this Futuro did not include this feature.

Except! The first photo is from the book "Futuro: Tomorrow's House from Yesterday", We had looked at this photo many times but never before noticed that it also shows the Futuro at a time when the deck/platform was installed.

As always our thanks to Yves for sharing his excellent Futuro research. Yves original photos can be found here and here. 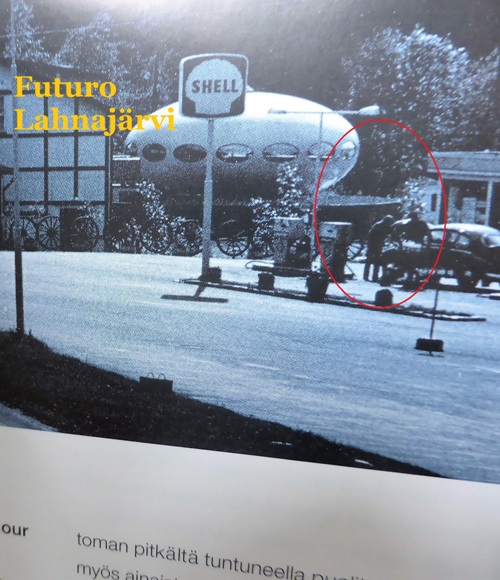 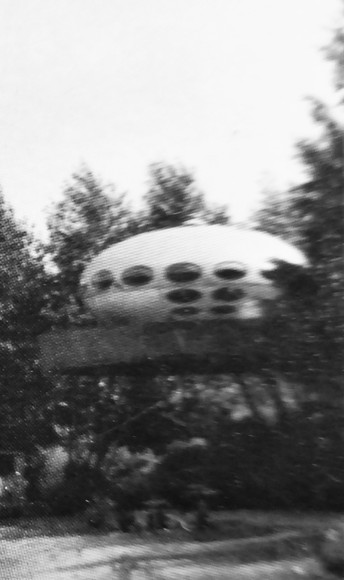 We are always impressed by the frequency with which Yves Buysse manages to find new and interesting Futuro related photos and information. This time around is the photo below; the original can be found on Flickr.

The photo shows the interior of, presumably, the self-service section of the cafe at the Shell Gas Station on Lake Lahnajärvi where this Futuro was located and served as a part of the cafe. The interesting aspect of the photo is the Futuro "window treatments".

As always Yves thanks for sharing your Futuro "finds". 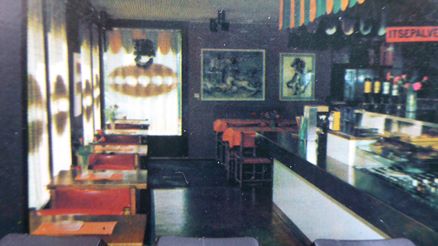 Based on Google Translate we thought that one of two photos from the Facebook page Rantaravintola Lahnajärvi Oy added in the last update was some kind of a job advertisement. Marko Home emailed us this past week with a translation that confirms this is the case; thanks Marko. The ad translates as follows:

"Person with good sale skills will be hired as a cashier or a salesperson. Replies tel. 924 88 856 Eloranta"

Yves Buysse often digs up new and interesting little Futuro "tidbits" and recently he posted the two images below to Flickr. The images originated on the Facebook page Rantaravintola Lahnajärvi Oy (here and here) and relate to this Futuro during its time at Lake Lahnajärvi.

The photo on the left is clearly a "family photo" but the one on the right we are not too sure of as Google Translate is once again struggling with Finnish but we think it may have been an ad looking for wait staff and/or a cashier. That said we may be completely on the wrong track; if so and you are able to "correct" us please let us know. 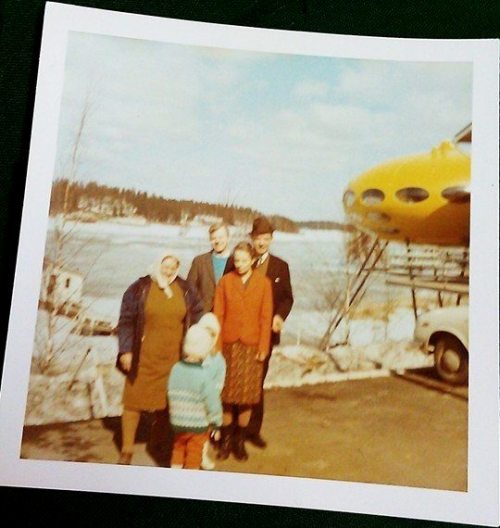 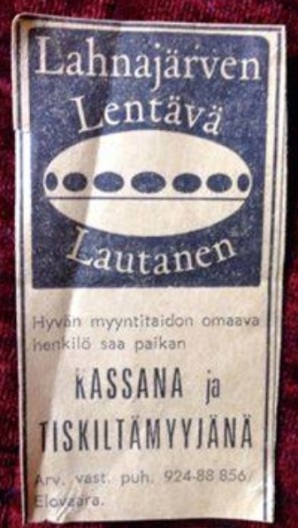 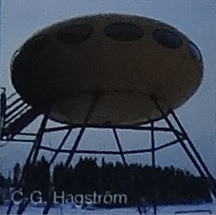 This photo by C.G.Hagstrom is one of several on this poster for the small Futuro Exhibition that took place at the Museum Of Finnish Architecture in the autumn of 1998 that we added to our collection of "Things Futuro" this past week. The photo as reproduced on the poster is very small and rather unclear.

Though not identified on the poster the photo is almost certainly of Futuro #002 during its time on Lake Lahnajärvi (the height of the supporting structure is unique, the color of the Futuro is the same and the trees in the background match with those in this photo). It seems likely that the photo was an early one as the steps are not enclosed in the same way as they are seen to be in other photos.

The video below was shot when this Futuro was transported to Matsalu in the autumn of 2005. The video credits indicate the year as 2006 but it seems likely that was the date the video was edited. Marko Home sent us the link to the video (thanks Marko) and also told us that he had been informed that the actual transport did take place in 2005.

The Futuro was transported fully assembled on a flatbed. Interestingly the door was open during the transport; we would have figured it would have been closed. Some of the imagery in the video is rather cool including footage of the Futuro with lights ablaze on the road at night, the Futuro being slowly driven through a field at the end of its journey (notice how it "rocks") and the apparent interest of a herd of cows as it arrived at its destination.

From 1969 to 1982 Futuro #002 served as a cafe at a Shell Gas Station on Lake Lahnajärvi (around half way between Helsinki and Turku). The Futuro was mounted far higher than normal and until now the only photograph we had seen of this was the second photo below by Veli Pekka Laine which can be found on the WeeGee Facebook Page here.

Recently however we received an email from Ting-Na Wang which pointed us in the direction of Instagram and Brett Colquhoun who had posted a new photograph (at least to us); the first photo below. My thanks to Ting-Na for putting me onto the photo and to Brett for sharing it. 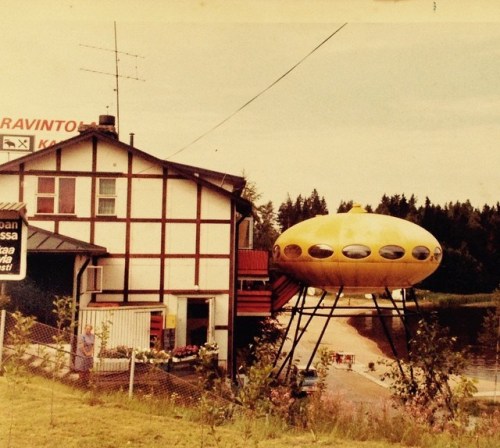 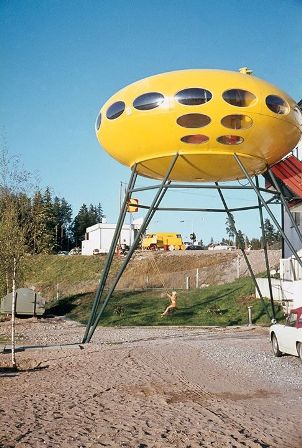 Not an update on the Futuro as it is now but for the record Yves Buysse recently sent us the coordinates (58°35'49.07"N 24°30'40.34"E) of this unit's previous location. The screenshot from Google Earth below shows the location; the house visible through the windows in this interior photo and in the Jimmy Tenor video can clearly be seen in the screenshot. The location was actually not Pärnu but Halinga which is in Pärnu county. 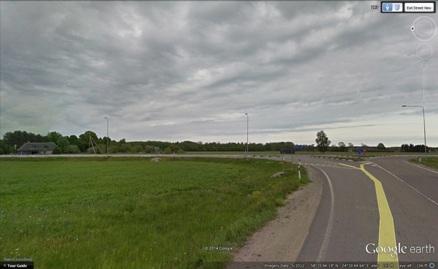 Achim Breiling recently sent us this photo; at the time we were unsure of the location (the thought was perhaps this Futuro in Lieto, Finland prior to being moved to Estonia) and so we added it to the "Unknown Locations" section of the "Where Are They Now?" page.

It turned out it was indeed this Futuro but that the photo was shot during the time the Futuro was in Pärnu, Estonia prior to being moved to its current location in Matsalu. Footage from the Jimi Tenor music video "The Year of the Apocalypse" shot using the Futuro while located in Pärnu confirms this; the house visible in the right window of the Futuro shot can be seen in the video at 1:47 and 2:43 (our thanks to Yves for this information). 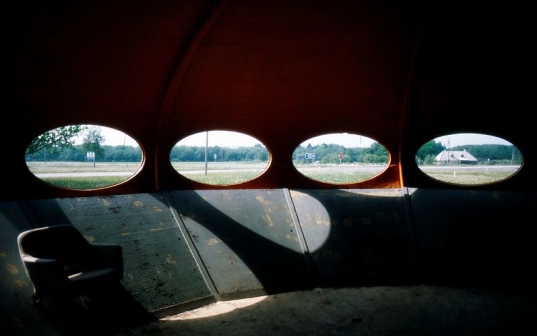 We recently managed to locate an original press copy of the photograph below; you can find more information on this photograph here. 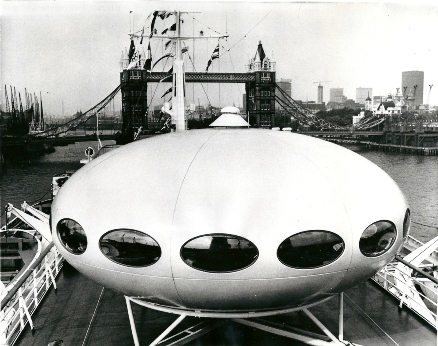 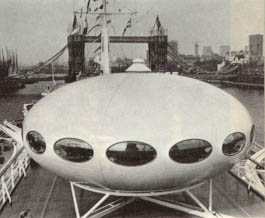 Futuro #002 has seen several relocations since it's first appearance in London, England. Though not the first unit manufactured the appearance of 002 at the 1968 Finnfocus-Export Fair (see photo top left) was probably the first time a Futuro was seen in any sort of "mass audience" setting.

The British newspaper the Daily Mail commented at the time that:

"This object, looking like everyone else's idea of a flying saucer from outer Space, is the Finnish idea of the perfect weekend cottage." (Quoted From: Article in The Guardian newspaper by Justin McGuirk dated 051012)

In the years between 1968 and the 70's oil crisis that effectively "killed" any chance of the Futuro really "taking off" (pun intended) there were many who helped shape the public perception of the Futuro in a positive way. Playboy Magazine suggested the Futuro was the perfect bachelor pad in a photo series entitled "Portable Playhouse" and in 1971 at the L&#252denscheide Plastic House Fair Professor Rudolph Doemach declared:

"After the preliminary tests it will probably be possible to use plastic even for apartment buildings. But plastic houses were primarily designed for holiday use, and hundreds of millions will have more and more leisure time in the 1980s." (Quoted From: Scenario Magazine in an article from 2010)

Following it's time in London 002 spent time in Lahnajärvi, Finland serving as a bar located near a Shell Gas Station followed by time serving as a cafe first in Lieto Zoolandia, Finland and then in Parnu, Estonia.

Futuro 002 remained in Estonia but not in Parnu and once again thanks to detective work by Achim Breiling another Futuro has been discovered once more. Google Earth dates the latest satellite imagery to 062810 but contacts have indicated that they have been in touch with the current owner and 002 can therefore be confirmed as still on site at this time.

This seems to be one of the least photographed Futuros with the photo below that was found on the the website Discover Estonia being one of the very few we have seen (Discover Estonia appears to have gone "the way of the dinosaur" but thanks to the Internet Archive Wayback Machine the page can still be accessed here. In addition Futuro 002 has, like other Futuro's, been used in the making of a music video; in this case Jimi Tenor's "The Year Of The Apocalypse". 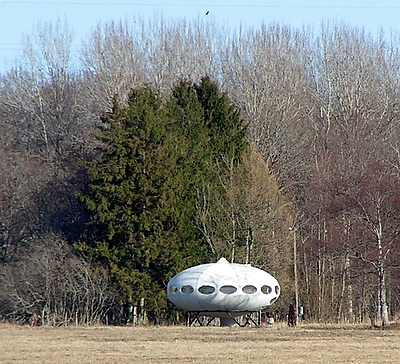