The collection contains all manner of items from unique original pieces from the early days of Futuro through contemporary mass-produced items and everything in between. The collection currently comprises a little under 450 physical items plus various "digital" items (in particular digital copies of newspaper articles) and these pages are effectively the collection's "catalog".

Listed below are videos and DVD's related to Futuro included in this collection.


Collectors can sometime be an odd bunch and we recognize that we likely fit that definition. Sometimes to a collector an item fits a collection's theme while someone who does not have that same collector "gene" might wonder what the purpose of acquiring the item actually was. The collector might simply say that it "fits the collection" and that is enough.

This group of three European, and thus PAL video standard, VHS videos could be seen to fit this category of item. We do not, and like most of us have not had for some time, a VHS player and, even if we did, it would be configured to the North American NTSC video standard and so would not play these PAL standard videos. That said there are services available to convert VHS tape, any format, to digital media for playback so we will likely have one or more, if not all, of these tapes converted to digital at some point.

Specifically the videos are: 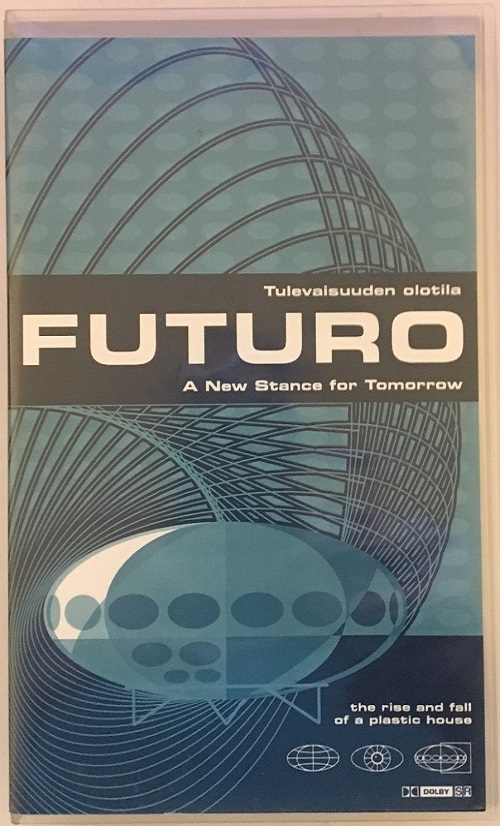 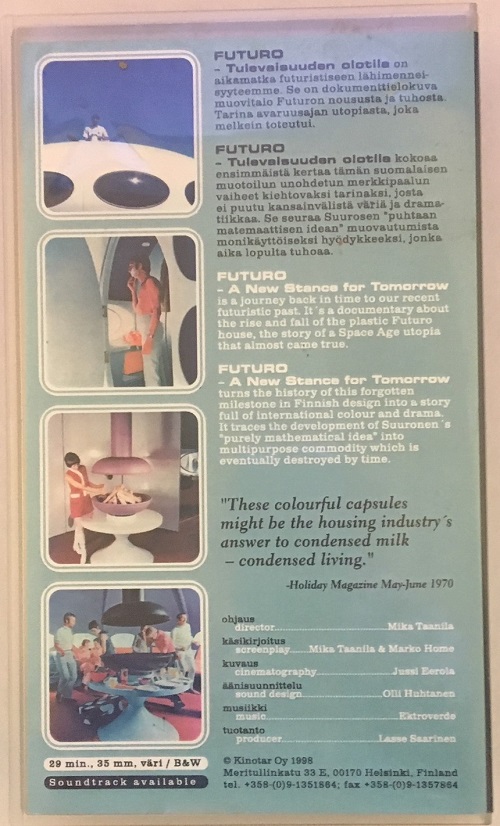 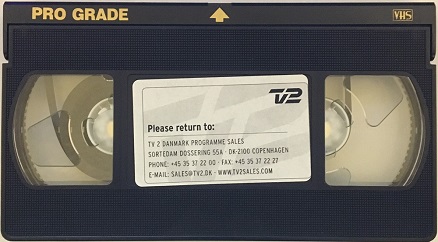 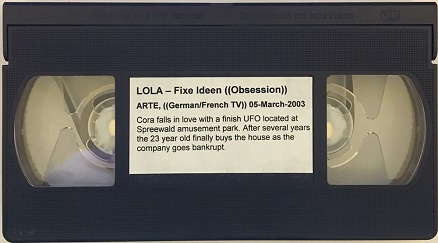 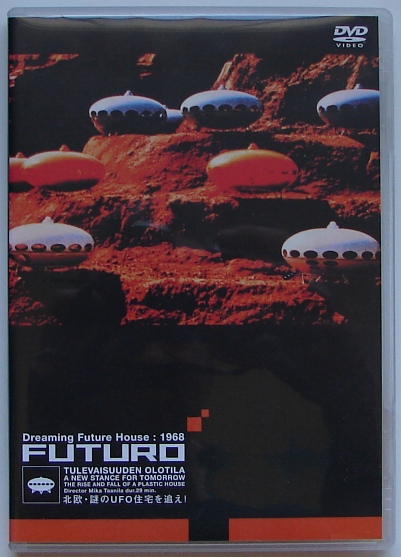 This is a Japanese subtitled version of the 1998 Taanila film. If you do not speak Japanese a DVD featuring a copy of the film along with many wonderful extras comes with the book Futuro: Tomorrow's House from Yesterday edited by Marko Home & Mika Taanila. In addition you can obtain a copy of the film - without the extras - as a part of the compilation DVD Aike & Aine.


This is a 2013 re-release of the 2006 German documentary Weltmarktführer: Die Geschichte des Tan Siekmann

which recounts much of the life story of Tan Siekmann. Siekmann made a great deal of money in the "tech" business with his company Biodata Systems GmbH (In German - English by Google Translate here) but ultimately went bankrupt and then recovered several times.

Siekmann at one time owned the Niedernhausen Futuro and the film includes some footage of the Futuro taken during a return visit by Siekmann to the Futuro during the filming of the documentary. Check out the footage here. 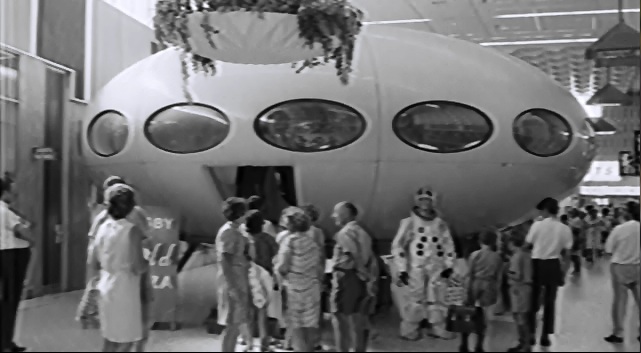 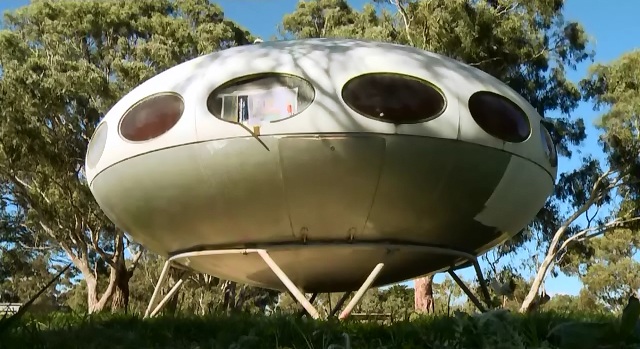 That Futuro was the one now located in Saint Ouen, France which, at the time of shooting, was located at the C.N.I.T. building in La Défense, Paris.

The Futuro appears at 1:50:38 for just a couple of seconds in the background of an outdoor scene shot just outside the C.N.I.T. building. The Futuro can be seen to the left of the screenshot from the movie displayed below. 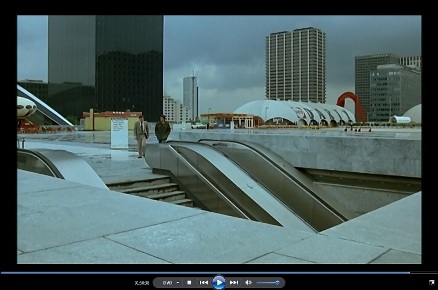 
Time & Matter is a compilation DVD that features several short films and it is of interest to the Futuro fan because it includes Mika Taanila's "Futuro: A New Stance for Tomorrow".

Taanila's film is included with the book "Futuro: Tomorrow's House from Yesterday" edited by Marko Home & Mika Taanila but that can be an extremely expensive book to buy and it is not easy to find a standalone copy of the movie.

This DVD can be an economical way to get your own copy of Taanila's film; a "must have" for any Futuro fan. 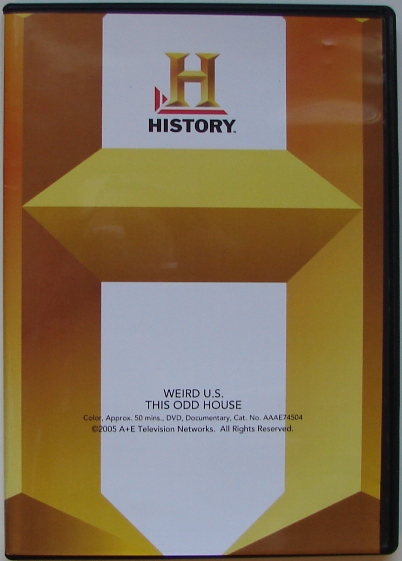 Weird US was a reality TV series aired on The History Channel (2004-2005) which starred Mark Moran and Mark Sceurman scouring the US for all things weird. Moran and Sceurman were the founders of the magazine Weird NJ (several issues of which featured the Futuro House - check out the Magazines section of this collection) and expanded their business to other states, books and TV.

Episode 8 of the series is titled "This Odd House" and includes a two minute section featuring the Futuro House. The feature includes commentary, several still shots of Futuro Houses (Dombai & Hirvensalmi among others) and a couple of short video clips which feature Futuro #002 on the Finnpartner at Finnfocus in 1968 and Barney Vincelette's Houston Futuro (and Barney himself even makes a brief non speaking appearance).